Identify characteristics of Realism as an artistic movement.

Tutorial
what's covered
This tutorial covers Realism. By the end of this lesson, you’ll be able to identify and define today’s key terms, describe influences on the development of Realism and Modernism, and identify examples of a Realist painting. This will be accomplished through the exploration of:

big idea
Realism is the first movement associated with Modernism, itself a movement that focused inward, making the art and the process of creating it subject matter in itself.

The artwork that you will be looking at today dates from between 1849 and 1893, and focuses geographically on Paris, France, and Philadelphia, Pennsylvania.

The historical context of Realism takes place over many years, and involves major economic developments such as the Second Industrial Revolution, where practices such as assembly line automation became standard practice.

A phase of the Industrial Revolution that occurred during the second half of the 19th century, and involved technological innovations such as the use of electricity and the invention of the internal combustion engine.

This time frame includes breakthroughs in science, such as the idea of natural selection and evolutionary theory by Charles Darwin.

It also includes major sociological developments, including the formal establishment of the science of sociology by Auguste Comte (his full name was Isidore Marie Auguste François Xavier Comte), shown below on the left, as well as the development and formalization of socialist ideas such as Communism from Karl Marx, shown below on the right. 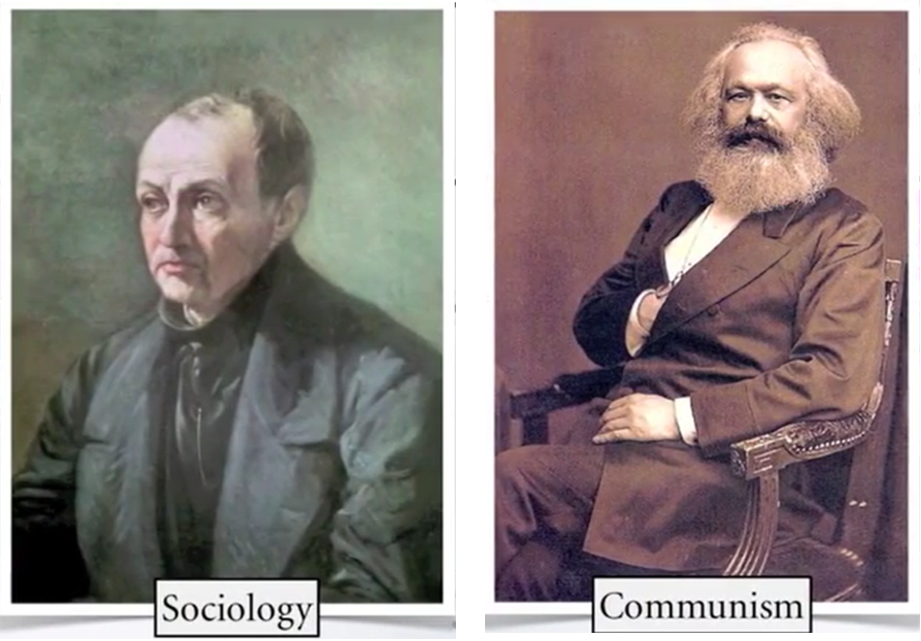 3. Realism and Modernism: Characteristics and Influences

Realism is a form of Modernism. Modernism was a tendency in art that began during the second half of the 19th century. Artists during the Renaissance viewed the flatness of the support and visibility of the brush strokes as a limitation of painting. Modernist artwork, such as Realism and Impressionism, saw the embracing of this supposed limitation. This inward focus is fundamental to Modernism, in which making the art object and the process of art-making became a subject in and of itself.

A movement in the arts that involves a break with tradition and emphasis on formal innovation; unlike earlier movements, modernism focuses on the process of art-making as a subject in itself.

Realism focused on producing scenes from everyday life—there’s no artificiality or idealism. Like other Modernists, Realists broke from the tradition and perceived constraint of Academic teaching; Realism was very much a reaction against the Academy. This is why Realism is considered to be the first movement associated with Modernism and in many ways the beginning of Modern art itself.

An artistic movement beginning in France in the late 1800s characterized by honest representations of everyday situations and objects, portrayed without bias

As previously mentioned, Realism was a break from the Academy’s focus on history painting and mythological scenes, and instead focused on subjects that could be actually observed. This included subjects from everyday life and a real emphasis on scenes taken from contemporary life.

4a. Gustave Courbet
Jean Désiré Gustave Courbet, a self-proclaimed Realist and Socialist, extolled the virtues of the working man in his paintings—the common man, whose backbreaking work, such as stonebreaking, was the foundation upon which modern society could be built. Courbet’s work is considered some of the best examples of Realism, particularly his painting “The Stonebreakers.” There is nothing idealized or glamorous about it. It simply depicts a scene of human toil and arduous labor.

Notice how the emphasis is on the labor of the men, rather than their individual faces, which is why you don’t see them. It’s also a sad portrayal of the fate of the common peasant, according to Courbet. The youth and the older man represent the grim depiction of a life of labor. The old man’s clogs and the young man’s modern boots indicate the subtle suggestion of perpetuity, meaning that this isn’t a cycle that’s going to change any time soon.

Suffice to say that the Academy was less than pleased with the work of Courbet, particularly with his monumental life-size submission of the “Burial at Ornans.” As opposed to earlier examples of burial portraits, such as El Greco’s “Burial of Count Orgaz,” there’s nothing spectacular or spiritual about it. In fact, the person being buried isn’t even shown—just the hole can be seen. Can you see the person that dug the hole—the gravedigger--sitting on his knees?

Just as in “The Stonebreakers,” there’s nothing idealized or glamorous about this work of art—it’s simply a slice of life. On one side are the grieving common people, and on the other side are the clergy, some of which are shown as bored or disinterested, just like at a real funeral—for instance, the clergyman on the left, below, and the little altar boy on the right. 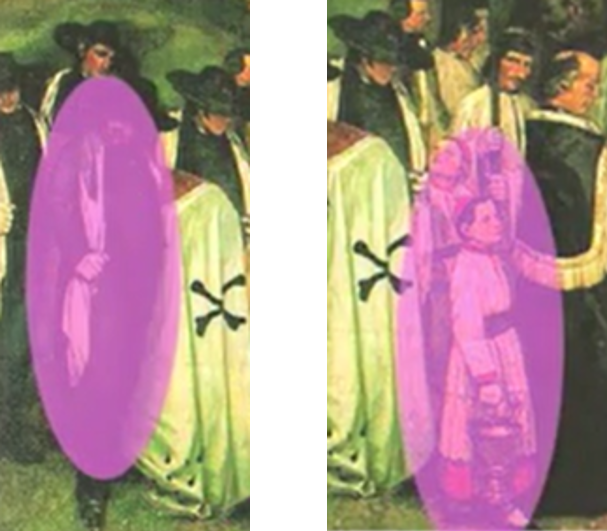 did you know
Although the realistic portrayal of the bored funeral spectators borders on the amusing, it wasn’t appreciated at all by the Academy. In fact, they refused to show his paintings, resulting in Courbet opening his own gallery, names the Pavilion of Realism, to showcase his work.

4b. Édouard Manet
Another artist, Édouard Manet, created an uproar and scandal beyond that of Courbet. His depictions of common nude women were believed to be prostitutes rather than mythological figures. (Note, they probably were!) The scandal caused by this next example was compounded by the fact that Manet, like Courbet, painted the image on a huge canvas—something that was usually reserved for history paintings. This painting, titled “Luncheon in the Grass,” was considered particularly inappropriate for how it seemed to reference and disrespect earlier works of art of a similar theme.

The painterly style of the landscape feels rushed and almost an afterthought in its patchy brush strokes, and serves as a setting for the depiction of two young men, one of which—the man in the hat—was actually Manet’s brother, and the nude women, supposedly prostitutes, accompanying them. It’s another example of an artist breaking with the tradition of the Academy and the weakening influence of the Academy in general.

did you know
In reality, it wasn’t the nudity in the painting that was considered offensive, but rather the social status of the women.

Another one of Manet’s most famous and scandalous paintings is of the nude and supposed prostitute depicted in his piece called “Olympia.” Now, Manet seemed to be striking as many nerves as he could in this work. A young woman reclines along a divan or bed, still wearing her sandals or shoes, and is waited on by a black servant who is bringing her flowers.

hint
Manet’s painting recalls a similar work by Titian of a reclining Venus, but rejects Titian’s warm and bright colors. In Manet’s painting, the woman’s expression is much more authoritative, but also seems somewhat disinterested in the viewer, as opposed to Titian’s Venus, who looks seductively out at the viewer. The painting of Venus was commissioned for a pleasure chamber of some nobleman.

“Olympia” embodies a larger emphasis, from artists such as Manet and Courbet, on the realistic over history or mythological paintings, and characterizes part of a broader Realist tendency to portray workers, prostitutes, and the poor—common people rather than political leaders, the aristocracy, or idealized images of classical subjects featuring mythological figures.

4c. The Americans: Henry Ossawa Tanner
Realism also found a place in the American sphere artists of the 19th century. This next painting, by Henry Ossawa Tanner, is one such example. Now, the overall style is very painterly. The brush strokes are very noticeable, and lend an air of vibrancy or energy to the painting that seems to not to affect the two people portrayed within it. This is likely due to the deep interpersonal focus that Tanner created between the little boy and the elderly man.

Tanner was the first African American painter to become known internationally. He took a rather derogatory or degrading theme that was common at time of the banjo-playing African American entertainer, and transformed it into a touching depiction of human connection, love, and patience.

Tanner’s work is another example of the emerging Modernist trend in art. Because of the rise of Modernist styles such as Realism, Impressionism, and others, the Academic style and influence that had been so pervasive in the eyes of this emerging group of artists slowly went into decline.

A movement in the arts that involves a break with tradition and emphasis on formal innovation. Unlike earlier movements, modernism focuses on the process of art-making as a subject in itself.

An artistic movement beginning in France in the late 1800's characterized by honest representations of everyday situations and objects, portrayed without bias.

A phase of the Industrial Revolution that occurred during the second half of the 19th-century and involved technological innovations, such as the use of electricity and the invention of the internal combustion engine.