Identify the structure and function of red blood cells.

Tutorial
what's covered
This lesson will cover red blood cells by looking at:

Red blood cells are also known as erythrocytes, and they make up about 45% of total blood volume. Their main role is to carry oxygen to cells and to carry carbon dioxide away. They are shaped like a disk with a little indentation in the middle of it; the shape of a red blood cell is important to its function. 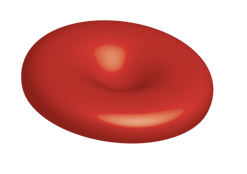 Maintaining a stable red blood cell count is important for homeostasis; without enough red blood cells, we'd be unable to provide all the cells in our body with sufficient oxygen.

Some facts about red blood cells:

Cells found in the blood that carry oxygen and carbon dioxide.

Another name for red blood cells.

The number of red blood cells in a microliter of blood.

Production of red blood cells is an important process for our body; this process starts with the kidneys. The kidneys play a large role in filtering blood, and, as blood is being filtered, they help to monitor oxygen levels in the blood. If the kidneys detect a decrease in oxygen levels, they are going to create and secrete a hormone called erythropoietin, abbreviated as EPO. EPO will then stimulate bone marrow to produce new red blood cells.

This is an example of a negative feedback loop because a change (low blood oxygen) was detected and then reversed to bring the body back to homeostasis. 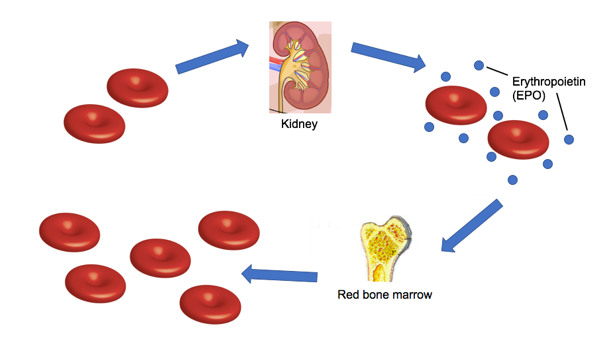 Erythrocytes deliver oxygen to the body's tissues with lots of hemoglobin.

Hemoglobin is a quaternary protein made of four globin polypeptides. Each globin contains a heme group; each heme contains an atom of iron and it is this iron atom that binds to oxygen.

Oxyhemoglobin is the name that we give to hemoglobin that is carrying oxygen. 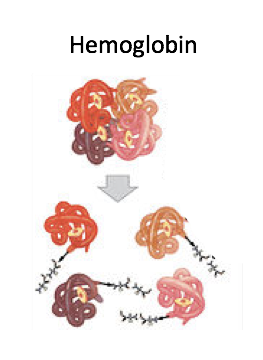 One molecule of hemoglobin can bind up to four oxygen molecules at a time, but factors such as the ratio of carbon dioxide to oxygen in the blood, temperature, and acidity of the tissues can affect this amount of oxygen that binds to hemoglobin.

did you know
When iron is exposed to oxygen, it produces rust. The process of that reaction happening gives blood that deep red color when the iron in the heme group binds with oxygen.

When hemoglobin is lacking oxygen, the blood appears to be more of like a purplish, bluish color as it travels through your veins.

Hemoglobin is a quaternary pigment protein (it is made up of four globin polypeptides); it is primarily used in erythrocytes to transport oxygen and some carbon dioxide.

A term used to describe the protein structure of hemoglobin.

Within the heme group of each globin polypeptide, iron is the atom to which oxygen binds.

The term used to describe when oxygen is bound to hemoglobin;

summary
The structure of a red blood cell is that of a disk with an indentation in the middle. It contains hemoglobin, which gives the cell its red color. Its function is to carry oxygen to the cells of the body and carry away carbon dioxide. Hemoglobin is the protein that allows red blood cells to carry oxygen. Red blood cells are produced when the kidneys detect low oxygen levels in the blood. They create and secrete a hormone called erythropoietin, which signals bone marrow to produce more red blood cells.

The number of red blood cells in a microliter of blood.

Another word for red blood cells.

A term used to describe the tertiary protein structure of hemoglobin.

Hemoglobin is a quaternary pigment protein (it is made up of four globin polypeptides). It is primarily used in erythrocytes to transport oxygen and some carbon dioxide.

Within the heme group of each globin polypeptide, iron is the atom to which oxygen binds.

The term used to describe when oxygen is bound to hemoglobin; oxygen + hemoglobin = oxyhemoglobin.

Cells found in the blood that carry oxygen and carbon dioxide.