Understand that conflict can arise between church and state in the U.S. and identify specific historical examples.

(more)
See More
Tutorial
what's covered
What happens if a government is founded on principles that include religious freedom? What happens if this government creates laws that run counter to the beliefs and practices of a particular religion? This lesson looks at issues such as this, which are both political and religious, by covering:

One such instance where a state with religious freedom made laws counter to a religion occurred in 1862. Under President Abraham Lincoln, the Morrill Anti-Bigamy Act was passed by the US Congress. In the midst of the Civil War, however, there was little energy or resources for enforcing its mandates. The mandates stated that anyone practicing polygamy, or plural marriage, would be subject to a large fine and up to five years in prison.

One possibility of what happens when this kind of conflict erupts is that they will eventually have to be looked at and dealt with in a court of law. This was the situation back in 1878 with a famous case of Reynolds versus the United States of America.

Polygamy was not uncommon among the early Mormon pioneers who had worked their way west to settle on the shores of the Great Salt Lake in Utah. The Mormon leader, Brigham Young, was committed to staying out of the business of the Civil War, so President Lincoln turned his head for a time. Sixteen years later, however, the US court system was not so tolerant.

did you know
Polygamy is still practiced today among several Mormon fundamentalist groups.

George Reynolds, a Mormon and senior support to Brigham Young, presented his own plural marriage activity as a test to prove that the US government was trying to outlaw plural marriage, or polygamy. And therefore, the US government was contradicting itself with respect to the First Amendment, freedom of religion. Reynold’s defense was that, as a male member of the Church of Latter-day Saints and of the Mormon faith, his religious duty was to have many wives and multiply. In certain interpretations of Mormonism, the practice of plural marriage is closely tied to the spiritual commitments of the faith of Mormonism.

The US Supreme Court found Reynolds guilty, ultimately distinguishing between religious belief or opinion and actions that spring from those opinions. In other words, the court agreed that it could not rule on belief but has the responsibility to uphold the law if actions run counter to that law. In this case, the law was based on and traced back to English law, a law of monogamy from the 16th century under King James I of England.

2. The Native American Church and Peyote

Among the Native American people of North America in the United States, there are many cases of religious ideology and practice running into conflict with governmental structure and policy and legality, such as the use of ceremonial medicines and plants during ceremony and ritual. There have been several significant Supreme Court cases regarding the legality of peyote use among citizens of the United States in the territory of the United States.

You are familiar with the complex and tragic history of the Native American population on the land that is now called the United States. Among the associated customs, beliefs, and practices of some of the indigenous people is the ceremonial use of the psychoactive plant, peyote, a cactus. For thousands of years, many tribes have handed down the belief that ingesting the sacred plant facilitates communion with the spirit world and the realm of the ancestors.

In 1990, there was a famous Supreme Court ruling: Employment Division, Department of Human Resources of Oregon v. Smith. The state of Oregon effectively tried to deny unemployment benefits to Alfred Smith on the grounds that he had committed a crime, that he had ingested peyote, an illegal substance. Naturally, Alfred Smith’s defense was that peyote was used in the context of a ritual ceremony and justifiable on the grounds of the First Amendment, the freedom of religion.

Peyote use in ceremonies was part of his religion as a member of a religious entity in the United States called the Native American Church. The Supreme Court stated that the ritual use of peyote in association with this religious tradition is not actually exempt from state laws prohibiting its use, and essentially left jurisdiction in the hands of each individual state. As Supreme Court Justice Antonin Scalia wrote: 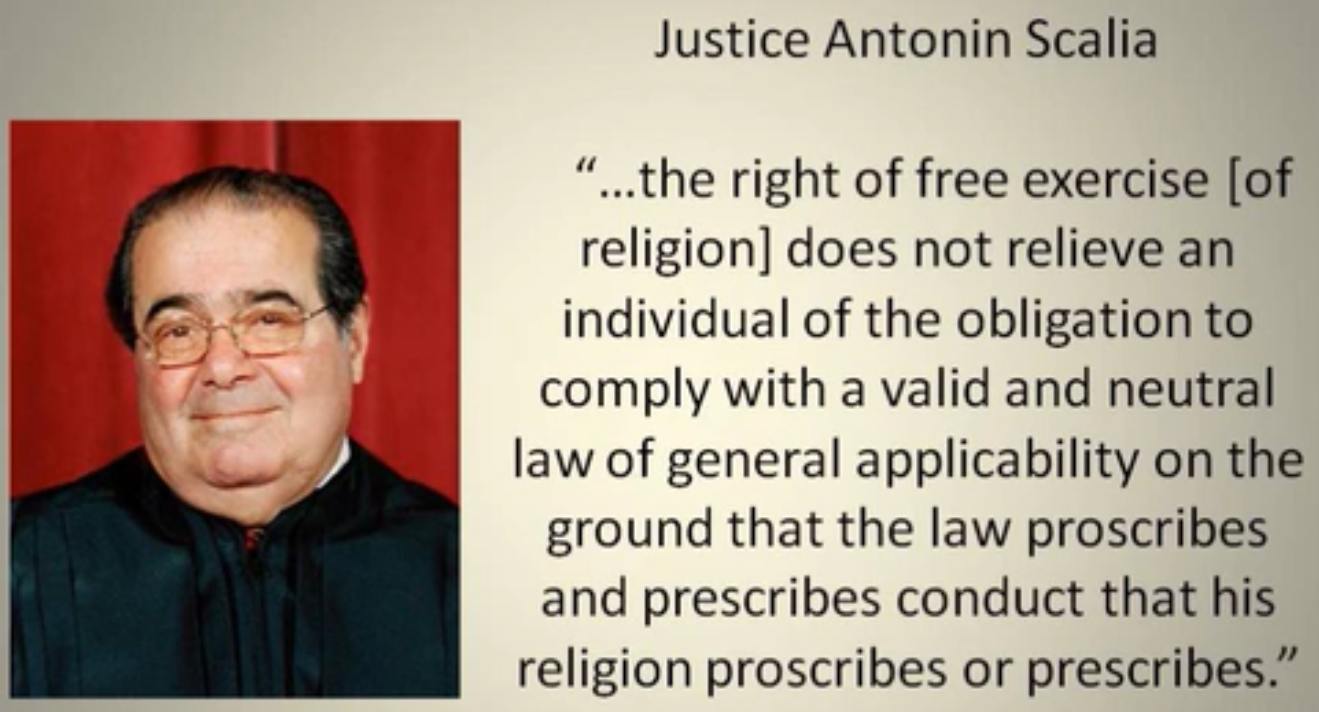 This led Congress to pass the Religious Freedom Restoration Act in 1993, which was an attempt to prevent unnecessary burdens or restrictions on religious freedoms.

Another conflict between religion and state and federal legal structures is in the domain of health insurance. Just in the last several years, there has been debate around the issue of a federal mandate that employer healthcare plans cover contraceptive services. Well, for many Catholic organizations and individuals within these organizations, this presents an ethical dilemma, something that’s directly in conflict with their religious beliefs and specific principles of their religion with regard to contraception.

The Supreme Court applied the Religious Freedom Restoration Act (or RFRA), to determine that the government had not sought the "least restrictive means" in mandating these healthcare plans, and so Catholic organizations and others opposed to contraception could not be required to provide them.

summary
You’ve been looking at conflicts that have erupted between individuals within religious groups and their rights under the Constitution and legal structure of the United States. The first example you looked at was issues related to Mormonism and polygamy. The Native American church and peyote use in ritual and ceremony is also an example of religious customs running against the law. The Supreme Court’s ruling effectively left the business of indictment in the hands of individual states. The 1990 peyote ruling by the U.S. Supreme Court, written by Justice Scalia, and later the Religious Freedom Restoration Act of 1993, are still referred to for issues related to religious freedom and beliefs as they interface with public policy and state and federal laws, as with the issue of Roman Catholicism and contraception.

Source: This work is adapted from Sophia author Ted Fairchild.