Representing Skewed Data on a Graph

Identify a graph for a skewed distribution.

Tutorial
what's covered
This lesson discusses representing how skewed data is distributed. By the end of the lesson, you should be able to identify the mean, median, and mode on a skewed distribution. This lesson covers:

The first distribution that you see below is skewed. It reflects a situation in which there would be many values concentrated toward the lower end of the distribution relative to the higher end. This is typically how the housing market is distributed. 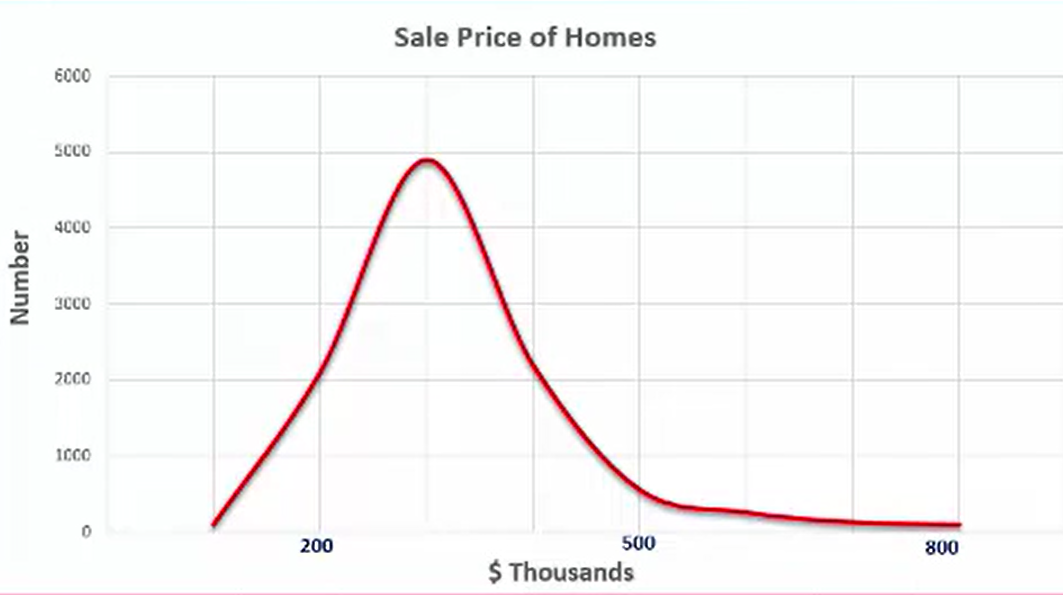 This second distribution is skewed, and it reflects a situation in which there will be many values concentrated toward the higher end of the distribution relative to the lower end. A good example of this distribution would be the mileage on the odometers of used cars.

Refer back to the home values graph. On the bottom (horizontal) axis, you have the price listed in thousands of dollars. The range is from around 100,000 up to almost 800,000. The majority of the values are concentrated right around the $300,000 mark. This is going to be a right skewed, or positively skewed, distribution curve.

Why is it right skewed? Because so many observations are around that $300,000 point, but there are also a lot of homes priced much higher. That pulls the mean up while leaving the median or the middle value relatively low. 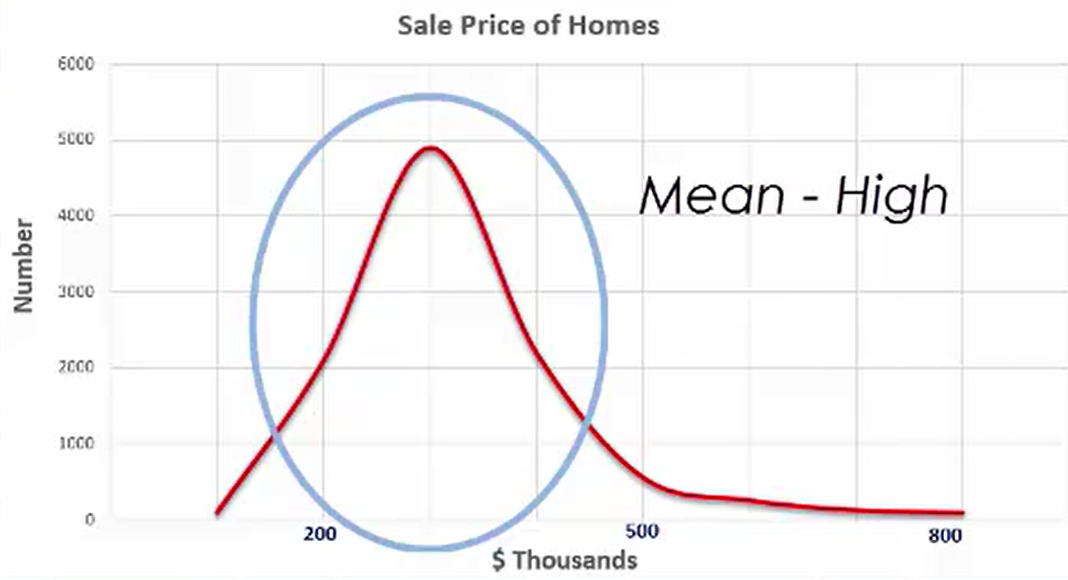 In this case, the mode would be the smallest value, then the median, and then the mean. You’d read the graph along the horizontal axis from left to right.

When you look at a right skewed distribution, the far right-hand side is pointing to the right. Imagine it’s an arrow, with the tail indicating the direction of the skew. 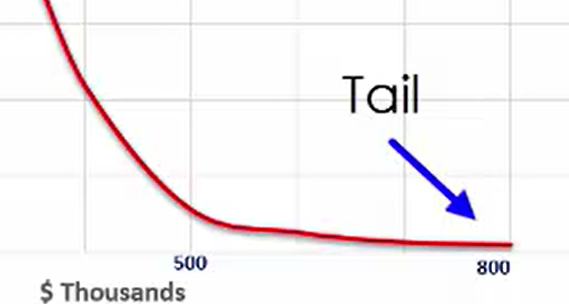 You see a relatively low number on the lower end in terms of the value of miles on a car. This is because people might wait a lot longer to trade in their vehicles, which might mean they have higher mileage. You’d see a left skewed distribution. Notice that the tail points to the left.

So how do we identify differences between distributions? Look at this graph, which shows a normal distribution. It’s symmetrical. The mean, median, and mode are identical, and they’d be the value right there in the middle. 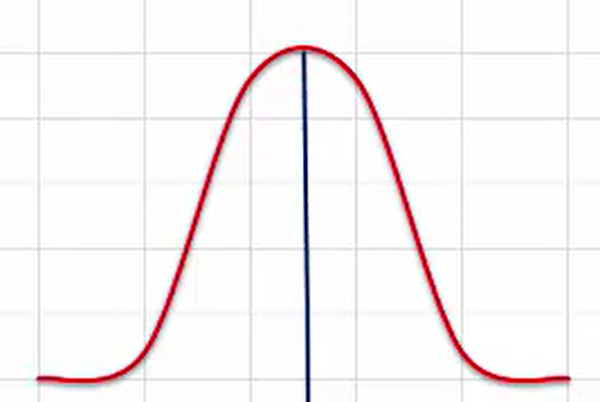 Bank account balances are an example of skewed distribution, and they are right skewed. Some people have quite a bit of money in their bank account, but many don’t. In this situation, the mode and the median are going to be relatively low, and the mean’s going to be higher. That’s simply because there are some large balances that pull up the mean. 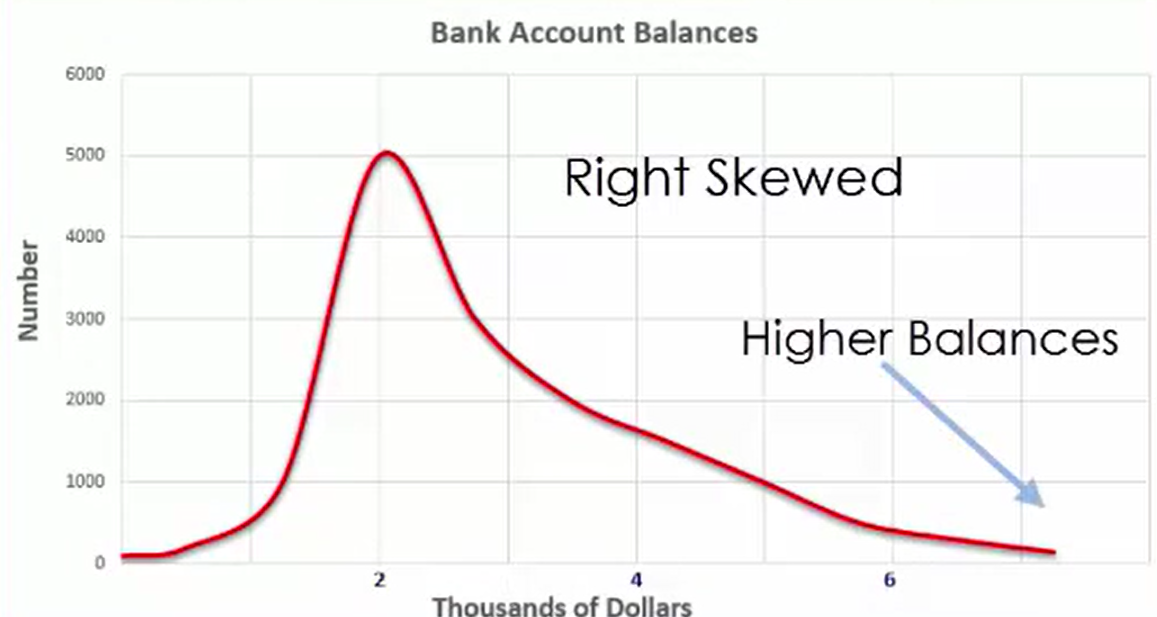 For an example of a left skewed distribution, look at the heart rate of a sample of people. You’re going to see the heart rate measured in beats per minute, and the mean beats per minute is probably somewhere around the 70 or 80 mark. You will see some beats that are higher or lower than that. However, there will be relatively few people with a low heart rate. That’s going to bring you to a situation reflected by a left skewed distribution.

think about it
How can you tell if a distribution is going to be skewed one way or the other?

It depends on the value of the mean, the median, and the mode.