Identify true statements about the post-conflict stage of conflict.

Tutorial
what's covered
While there are a number of ways that conflict can be broken into stages, all models look at three large phases: pre-conflict, conflict, and post-conflict. In this lesson, we’ll focus on:

1. THE RESOLUTION AND POST-CONFLICT STAGES

Remember that there are a series of stages of conflict. The pre-conflict stage is when an issue may be brewing, but you're not really aware of what it is. Then, of course, there's the actual conflict stage, which has several more specific stages within it.

The first of these is discomfort, or the feeling that something is wrong. Following discomfort is the incident stage, where something either minor or major happens to bring the conflict out in the open. Next often comes the misunderstanding stage, which leads to tension and then full-blown crisis.

Finally, there is the resolution stage, which is a deliberate action or group of actions to help parties meet their respective needs. When it is successful, resolution leads to post-conflict, or the relationship between parties after a conflict has been resolved.

A deliberate action or group of actions to help parties meet their respective and mutual needs.

The relationship between parties after a conflict has been resolved.

A conflict does not have to go through all the stages before reaching resolution and post-conflict; for example, a successful intervention at the discomfort level can lead straight from discomfort down to post-conflict.

Resolution can happen at any stage. 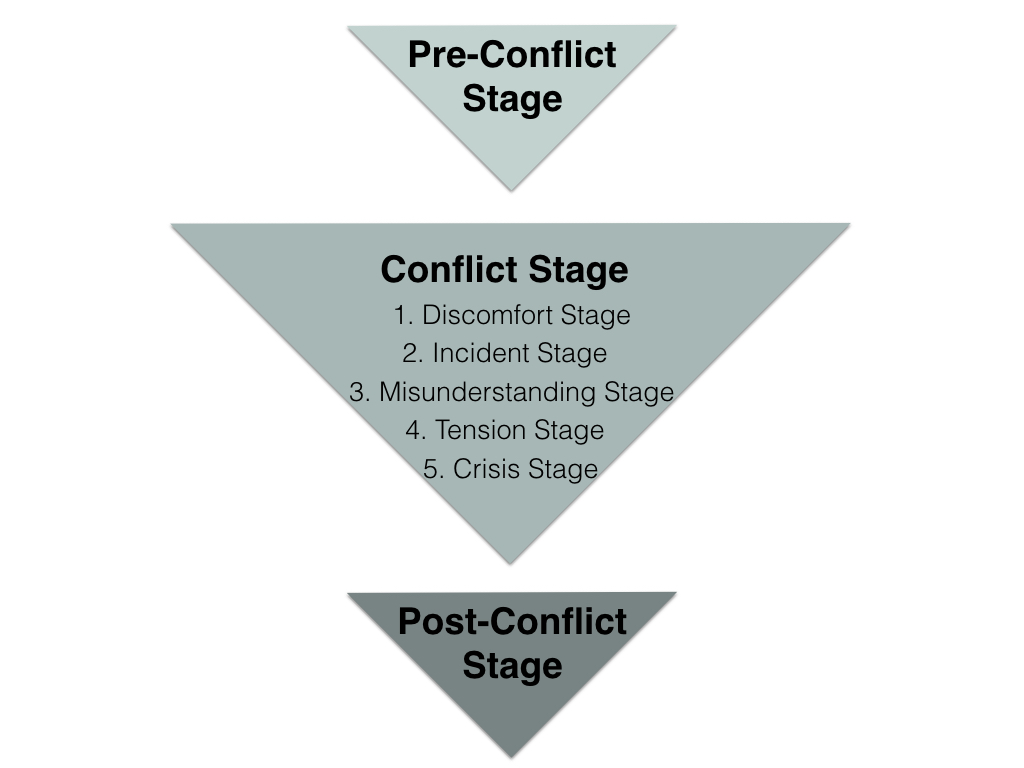 Let's look at some examples of how a conflict might be resolved at various stages.

Discomfort stage: Let's say you and a group of friends have been planning a surprise party for another friend. You have all divvied up the tasks, but you're starting to feel a little uncomfortable because people aren't keeping up their part of the bargain. You feel like you are the one that's doing most of the organizing. You're just a little uncomfortable with the situation, but you decide right away that you're going to sit down with your other friends and tell them how you’re feeling. You can all look at the list of tasks you've laid out, and revisit the responsibilities. If the dialogue is successful, and you feel as though things are now going more smoothly, you have reached a resolution before the conflict escalated to the next stage.

Misunderstanding stage: You have been getting a lot of extra work at your job; there’s a new deadline, and the emails have been pouring in. There’s one coworker that keeps sending you emails that sound a little harsh, saying things like, "Action requested. Do this now. Where is that? I expect this by the end of the day." You are feeling a little bullied, as this has been going on for a while. You then decide that you’re actually going to talk with this co-worker; however, you end up first having a conversation with another person on your team. This person shares an extra detail about the project: your coworker is sending you the emails because she had to take on extra work for someone who’s been out sick. Through this discussion, you find out that your coworker didn't intend anything at all by these emails. She's just overworked and is sending things out very quickly without realizing how she’s coming across. With a better understanding of the situation, you can now reach a resolution before the conflict escalates to the next stage.

Recall that the various stages of conflict can be revisited at any point during the conflict; a conflict can escalate or de-escalate, depending on whether or not a resolution is complete.

De-escalation would be the opposite; this is the movement of a conflict from a more harmful or intense stage to a less intense or harmful one.

You clear up a misunderstanding. Things are completely solved, but you move back to feeling just a little uncomfortable. The escalation and de-escalation can continue to happen during this stage of a conflict.

If a resolution is incomplete, the process of escalation and de-escalation can be restarted. Once a resolution has been reached, as can happen at any level, it leads to post-conflict in which a harmonious relationship can resume between the parties.

summary
In this lesson, you learned about the resolution and post-conflict stages, and how a conflict can continue to escalate or de-escalate among any of the other stages until a resolution has been reached.

Movement of a conflict from a more harmful or intense stage to a less intense or harmful one.

The relationship between parties after a conflict has been resolved.

A deliberate action or group of actions to help parties meet their respective and mutual needs.