Compare the risk and return of an investment.

Tutorial
what's covered
In this lesson, you will describe the relationship between investment risk and return. You will also consider how risk can make you more productive as you seek to solve financial problems. Specifically, this lesson will cover:

Are you interested in a video preview of this lesson? Click play to learn about the risks and returns associated with investments. When you’re through, move on to section 1.

In the world of finance, there is one certainty: you must take more risk to earn a higher return. Remember the Rule of 72? The Rule of 72 is a shortcut that tells you how long it takes to double your money when you have a fixed rate of return. For example:

In this example, risk refers to the possibility of losing money. In order to earn 6%, you will need to take more risk. The U.S. Securities and Exchange Commission (SEC) defines risk as the “degree of uncertainty and/or potential financial loss inherent in an investment decision.” Your financial risk tolerance, then, is the extent of your willingness to engage in financial behavior that has the possibility of a loss.

Provides an estimate of how long it will take you to double your money, calculated by dividing 72 by the interest rate.

1a. Types of Risk

Risk comes in many forms and often involves volatility. You can think about volatility as the value of an asset fluctuating up and down, or the variability of returns over time. An asset that can lose value is considered to be riskier than an asset that cannot go down in value. However, there is more to understand about risk than volatility and the potential for loss. Let’s look at a few types of risk that can really throw you off course during your financial journey:

hint
When interest rates increase, the value of most investments will decrease.

The possibility that a company in which you invest will be forced to close.

The chance that general interest rates will increase, which will reduce the value of most investments.

Occurs when you cannot sell something you own because of a weak market, meaning others aren’t willing to buy what you are selling.

Let’s look at inflation risk in more detail. You should care about inflation because inflation reduces the value of what a dollar can buy in the future. The following table provides an example of how inflation works in practice. Source: U.S. Bureau of Labor Statistics, Consumer Price Index (CPI) databases.

The amounts shown in the table above represent an average annual rate of inflation equal to 3.06% annually. It is worth noting that during the 35 years represented in the table, wages and salaries actually went up faster (3.93%) than general inflation. However, some big-ticket items, such as tuition, grew much faster than inflation and wages during this time period. Stated another way, increases in wages did not keep pace with the rising cost of going to school.

Inflation does not always occur uniformly. As the table shows, the price of some items increased faster or slower than general inflation during that time period.

The average annual increase in prices from year to year.

2. Saving and Investing: An Introduction

You should now be convinced that you need to be willing to take some risks to accumulate wealth. You have two basic choices when it comes time to decide how to put your money to work.

However, you won’t necessarily want to pick one option over the other. In general, you will want to combine both options over your financial journey to accumulate wealth.

Money you put aside for short-term goals.

An asset that you purchase to reach long-term goals.

2a. Combining Savings and Investments

hint
Note the peak in the graph, which is when Lucy retires. If Lucy has saved and invested wisely, she will be able to draw down her accumulated wealth to supplement her income needs during retirement.

Now consider Sam, who did not start saving and investing until age 30. However, at age 30, Sam experiences a large unexpected expense that required him to borrow $7,000. Essentially, this emergency slows Sam’s overall ability to amass wealth over his life span (see the previous graph). Sam may have a challenging time pulling sufficient money from savings and investments later in life to fund his retirement.

Sam’s example also shows the need to establish and maintain an adequate and liquid emergency fund and appropriate insurance (discussed in a later lesson). Because maintaining liquidity is so central to the concept behind saving and investing, let’s discuss it in more detail next.

Liquidity refers to how quickly you can convert an asset into cash. The illustration below shows the relationship between liquidity and returns. 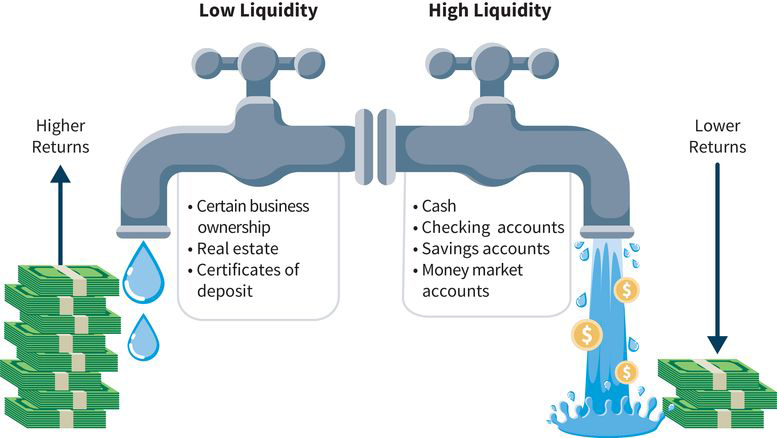 There are times when you should be perfectly happy to accept higher liquidity and lower returns. For example, in Sam’s case, he needed an emergency fund to quickly pay for his unexpected expenses.

Throughout your financial journey, you need to balance risk, return, and liquidity when making saving and investment decisions. An investment pyramid can help you do this.
Typically, you will take risks to solve or prevent a financial problem. Your goals and personal financial plan determine the amount of risk you are willing to take with regard to any financial decision.

How quickly you can convert an asset into cash.

As any seasoned investor will tell you, a good investment is one that offers low risk and high returns. Unfortunately, it is difficult to find such an investment. Usually, you must make a tradeoff between risk and return. This concept of a tradeoff is summarized by the investment pyramid shown in the following illustration. Think of the pyramids like those in Egypt, which require a solid foundation before the top layers can be added. 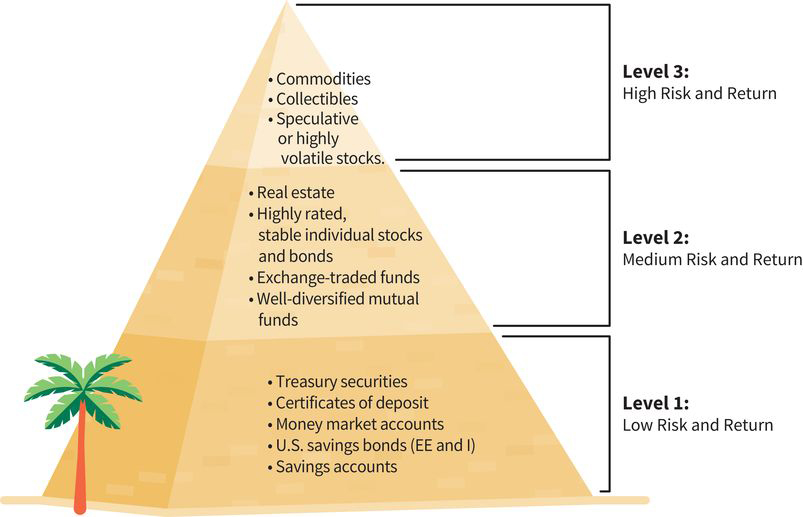 summary
You already know the definition of risk. In this lesson, you learned that there are several types of financial risk, one of which is inflation risk. This is the risk that general interest rates might increase, which will reduce the value of most investments. Often, you will consider a risk as you seek to solve a financial problem. You explored how taking these financial risks can lead to more productivity.

This lesson also gave you an introduction to saving and investing. In your financial journey, your combined savings and investments is what grows wealth. Although all investments come with some degree of risk, the investment pyramid showed you how high-risk investments typically yield high returns. You must understand the liquidity of each investment to know how quickly it can be converted to cash, especially in the event of an emergency. Generally, the lower the return, the more liquid an asset is.

The possibility that a company in which you invest will be forced to close.

The average annual increase in prices from year to year.

The chance that general interest rates will increase, which will reduce the value of most investments.

An asset that you purchase to reach long-term goals.

How quickly you can convert an asset into cash.

Occurs when you cannot sell something you own because of a weak market, meaning others aren’t willing to buy what you are selling.

Provides an estimate of how long it will take you to double your money, calculated by dividing 72 by the interest rate.

Money you put aside for short-term goals.