Identify different styles of paintings and portraitures in Rococo art.

Tutorial
what's covered
This tutorial covers Rococo art. By the end of this lesson, you’ll be able to identify and define today’s key terms, describe design elements of Rococo, and identify examples of Rococo art. This will be accomplished through the exploration of:

big idea
Jean-Antoine Watteau’s artwork is exemplary of the Rococo style in art with its emphasis on shimmering color and celebration of youth, luxury, and love.

Jean-Antoine Watteau is most closely associated with Rococo painting in France. He was very interested in gaining acceptance to the Academy of the Arts in France as well as painting themes that would appeal to his buyers, so to satisfy both, he developed a style called fête galante, which means “amorous festival.” Watteau was Flemish, and fell into the category of painters titled “Rubenistes,” after Peter Paul Rubens, who felt that color was the most important aspect of a painting. Watteau's influence helped in establishing the style of the Rococo as the most dominant style of painting in 18th century France.

The painting below, considered his masterpiece, was what he submitted to the Academy for consideration. The mythical island of Cythera was a place of eternal love and youth, and this particular group of individuals has made a pilgrimage to the island.

This painting recalls earlier French landscape paintings, but here the emphasis is very much on the people within it. They’re portrayed rather elegantly and delicately. Notice how even the men appear to move effortlessly on their feet. Watteau emphasizes color and gesture, and the influence of his Flemish roots can be seen in the fantastic rendering of material textures, such as the silk dress of the young woman in the front and the way sunlight reflects off of it, shown in this closeup: 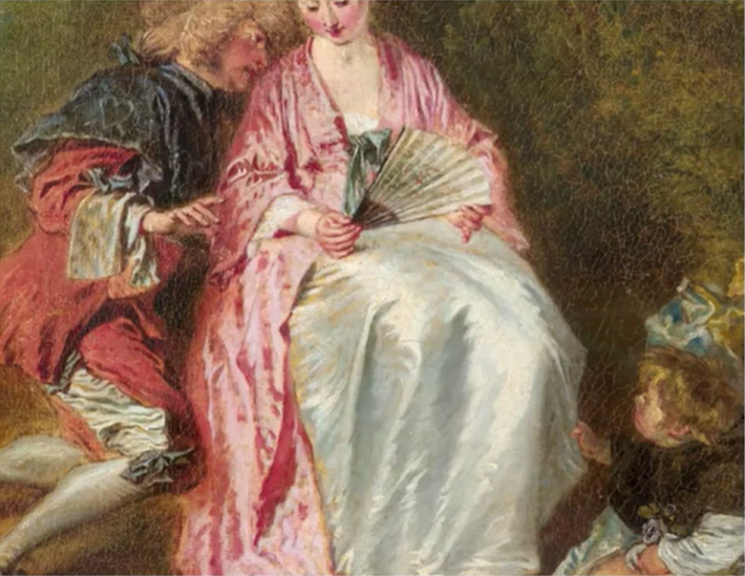 There were actually two versions of this painting. The second one looks very similar to the first, except it has significantly more cupids flying around overhead. Watteau’s work has a hint of melancholy in it regarding the fading of happiness and youth that is present in other paintings, such as Poussin’s '“Et in Arcadia Ergo.”

did you know
Speaking of melancholy, this particular painting was completed in 1717, only four years before Watteau’s death at the young age of 37.

François Boucher was another well-known Rococo artist, due in part to the early death of Watteau, as well as the patronage of Madame Pompadour, the famous mistress of King Louis XV. She commissioned the painting below, titled “The Toilet of Venus.”

hint
As opposed to the American version of the word “toilet,” the word in this context refers to the French interpretation, which has to do with cleansing.

Jean-Honoré Fragonard was a student of Boucher’s, and continued many of the themes seen in Watteau’s earlier work. Many feel that this next painting is synonymous with the Rococo period; thematically and stylistically, this painting truly defines the Rococo ideal. Fragonard uses bright pink pastels to draw our eye immediately to the figure of the young woman swinging, the operation of which is being carried out by what’s supposed to be an old bishop, hidden in the shadows to the right.

Can you see the woman’s lover, stretched out in the lower left-hand corner, on the ground surrounded by a bush? The young man is actually the patron of the painting and gestures adoringly at the young woman, who casually flicks off her shoe in the direction of the statue of a cupid, who is in a hushing gesture with his finger to his lips. Oh, to be young and rich and French! (That is, until the Revolution.)

The portrait was another area that remained important as a form of painting during the Rococo. A number of very talented portraitists emerged during this time, including women such as the artist Élisabeth Louise Vigée Le Brun. Below you will see a famous painting by LeBrun, a portrait of Marie Antoinette, which was commissioned by the young queen of Louis XVI.

Although it’s clearly depicting an aristocrat, or at least someone of means, the elaborate and decadent image that was typically associated with French royalty is absent here. It’s a far more reserved depiction of the queen appearing to tend to flowers, and it was quite controversial at the time among her critics, who felt it was improper to depict a queen in this fashion.

did you know
It may have been Marie’s attempt to reconcile with her unfavorable public image and connect with the people. However, if that was the case, it didn’t help. She was publicly executed, along with her husband, by the French people during the French Revolution in 1793.

Another Rococo painter of note from outside of France was the artist Thomas Gainsborough of England. He favored landscapes, which shows in his work; as you can see in the portrait below, the surrounding landscape seems to almost hold an equal amount of importance as the subject.

As a portraitist, he was known as a grand manner portrait painter who sought to elevate the person being depicted through a sense of elegance and refinement. As you can see in the next example, the soft appearance and feathery brushwork is indicative of the Rococo style.

The use of sarcasm, ridicule emphasizing weakness more than the weak person, denouncing vice and folly, and implying moral judgment

In today’s lesson about Rococo art, you learned how to identify and define today’s key terms. You also learned how to describe design elements of the Rococo and identify examples of Rococo art by exploring works by Jean-Antoine Watteau, François Boucher, and Jean-Honoré Fragonard. Lastly, you learned about Rococo portrait paintings of the period, exploring artwork by Élisabeth Louise Vigée Le Brun and Thomas Gainsborough.}}

A type of painting that developed during the Rococo period that depicts a party or other lighthearted scene taking place outdoors.

A style of portraiture that elevates the person depicted through references to classical and Renaissance art.

The use of sarcasm, ridicule emphasizing weakness more than the weak person, denouncing vice and folly and implying moral judgment.