Or
Close Popup
+
2 Tutorials that teach Role of International Trade
Take your pick:
Previous Next

Identify the role of international trade in an economy.

Tutorial
what's covered
This tutorial will cover the role of international trade, focusing on the impact it has on the current and capital accounts, as well as economic growth.

After the Great Depression, economists realized they needed a better way to keep track of the United States economy. Even though it is normal to go through fluctuations of growth and contraction, they wanted a better way to predict when a major depression was coming and to measure economic growth over time.

The answer was to calculate GDP, or gross domestic product, a term you should be quite familiar with at this point. Thus, they developed national income accounting.

big idea
National income accounting calculates GDP, which attempts to measure all economic activity in a country in a year.

So, to look at overall economic activity, we can consider two aspects:

When we find output, we use the following equation. This is because when things are produced, the output can wither by consumed, invested, purchased by the government, or exported to other nations.


Now let's consider the other aspect, income. When income is earned, what can be done with it?

Well, it can either be consumed, saved, paid in taxes, or paid to other nations for imports.

So, if we compare these two, we know that clearly, consumption is consumption, and we have already covered how savings and investment are the same in the economy.

However, when would G equal T? Well, G would equal T when the government collects exactly in taxes what they spend. This means they are neither running a surplus nor budget deficit.

In this case, it means that X would have to equal M, that exports would equal imports, with no trade deficit or trade surplus. 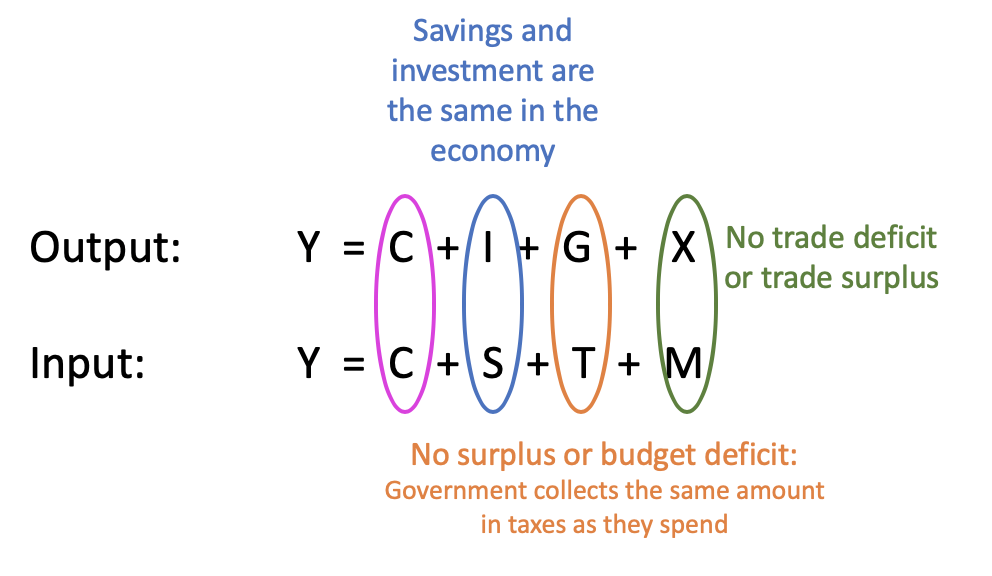 
However, X does not usually equal M. Typically we run a trade deficit. In other words, we are importing more than we're exporting: M > X.

This is called a trade deficit or current account deficit (which we will cover shortly). A deficit refers to shortages that result from spending in excess of revenue.

It this is the case, then, it means one of the following: 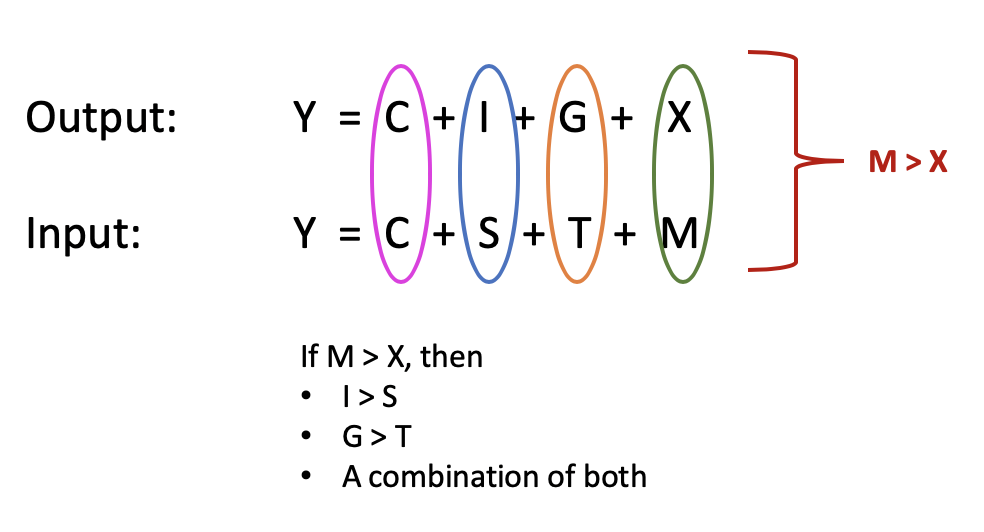 Shortages that result from spending in excess of revenue

One way to measure the economic impact of international trade is to measure the balance of payments, which involves comparing our demand and supply of foreign exchange.

Balance of payments is defined as a record of all monetary transactions that flow across a country's border, and its two major components are the current account and the capital account.

A record of all monetary transactions that flow across a country’s border; two major components are the current account and the capital account


The current account represents the sum of all recorded transactions, including traded goods, services, income, and net transfer payments.

hint
The current account is the sum of our balance of trade.

It shows how much a nation has spent on foreign goods, services, income, and transfer payments compared to how much it has earned on all of those things.

So we previously saw, a trade deficit means that we are running a current account deficit because we are spending more money on these items that we are trading than we are receiving. We are importing more than we are exporting.

Represents the sum of all recorded transactions including traded goods, services, income, and net transfer payments

Inflows in the capital account have an appreciating impact on a given currency, while outflows have the opposite, or depreciating, impact.

Examples would include the purchase or construction of machinery, buildings, and plants in other nations, or investment in foreign nation shares and bonds.

Circling back to the issue of a trade deficit, when our imports are greater than our exports, you may recall that this is a current account deficit.

This excess currency has to be used, and it will be used by foreigners to invest in the U.S., both in private investments and in public U.S. Treasury securities.

This results in a capital account surplus, summarized in this chart:

Captures investment and financing flows; inflows have an appreciating impact on a given currency; outflows have the opposite, or depreciating, impact

A current account deficit, or trade deficit, will cause a nation's currency to depreciate or get weaker over time.

If we are running a trade deficit, this means that our nation's currency is being supplied to purchase these things from other nations, which weakens our currency. Once our currency is weaker, Americans do not want to buy foreign products as much, so the imports decrease.

Now, as soon as our currency is weaker, foreigners will want to purchase more U.S. goods and exports increase. The end result is that the current account deficit tends to disappear because of the impact on our currency.

Let's wrap up today's lesson by discussing the impact of international trade on economic growth.

big idea
A main idea of macroeconomics is that when two countries trade, both nations are better off and are able to achieve greater economic growth, due to comparative advantage and gains from trade.

Trading with other nations allows a country to focus on those goods and services for which they enjoy a comparative advantage due to their own particular resources, workforce skill level, or education.

The country, then, can trade for other goods and services for which other nations enjoy the comparative advantage in producing. (Note, other tutorials cover actual examples in greater detail).

When both countries specialize in what they enjoy a comparative advantage in, and trade, they are both better off than before.

Because international trade can increase production efficiency, it can actually increase the rate of economic growth--which is a good thing.

However, keep in mind, we have also learned that trade deficits and fiscal deficits cause a need to borrow money, and when nations borrow money, it leads to foreign purchases of Treasury bonds.

The interest from those bonds is then paid to foreigners and must be subtracted from GDP.

Therefore, while international trade can contribute to economic growth, in this aspect, the interest paid to foreigners can have a negative impact.

hint
As a general note, any interest paid to Americans does not tend to impact GDP much. It can affect income equality or inequality, etc., but it does not tend to have much of an impact on GDP.

summary
Today we learned about national income accounting, developed to calculate GDP, which attempts to measure all economic activity in a country in a year. In order to look at overall economic activity, we can consider all output or all income in the economy. We defined the balance of payments, which is composed of the current account and capital account.

We learned about the impact of trade deficits on the current account, capital account, and currency. Finally, we explored how international trade can impact economic growth.

A record of all monetary transactions that flow across a country’s border; two major components are the current account and the capital account.

Captures investment and financing flows; inflows have an appreciating impact on a given currency; outflows have the opposite, or depreciating, impact.

Represents the sum of all recorded transactions including traded goods, services, income, and net transfer payments.

Shortages that result from spending in excess of revenue.