Identify the short-run supply curve on a graph.

Tutorial
what's covered
This tutorial will cover the short run supply curve, focusing on how to recognize the following on a graph: when a firm is profitable, breaking even, operating at a loss, and shutting down.

In review, we know that profit equals revenues minus cost.

The average total cost curve is what we look at to see if a firm is making a profit or sustaining a loss overall.

If these are just covered, then the firm is considered to be breaking even. Anything better than that, if price is above average total cost, means the firm is making a profit.

It is the average variable cost curve that we need to look at for short run decisions, especially when the firm is losing money.

However, if we are losing money, we need to look at our average variable cost curve and determine if we should shut down or produce at a loss.

This tutorial will show you that the supply curve is the marginal cost curve from above this shutdown point.

As mentioned, there are four different situations that the firm can experience in the short run. 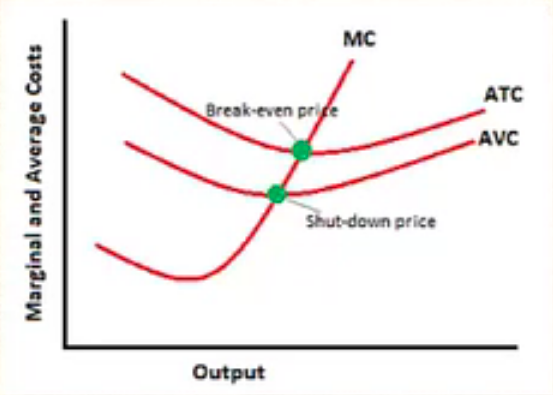 The first one is the optimal situation: profit.

If price is above our average total cost (P > ATC), then the firm is profitable.

When the firm produces where price equals average total cost, they are breaking even, because the price of the product is exactly covering, on average, all of the costs.

Now we discuss the less desirable situations. If price is below average total cost (P < ATC), the firm is not profitable and is losing money.

Now they have a decision to make and they need to look at their average variable cost:

think about it
Why should they consider operating? Well, they are actually going to minimize their losses by doing this because they have to pay their fixed expenses regardless in the short run. They have to pay rent, for example. If they can at least cover these variable or operating expenses--like paying for workers, materials, etc.--then they can put any money over and above that towards that fixed expense.

If they can't even afford to pay for workers or materials or any variable expenses, they should shut down in the short run.

They still have to pay that fixed cost, but they will lose less money by doing that than additionally having to pay for all of their factors of production.

The shutdown point on the graph is the point below which they would shut down.

Here is another graph of a short run supply curve. 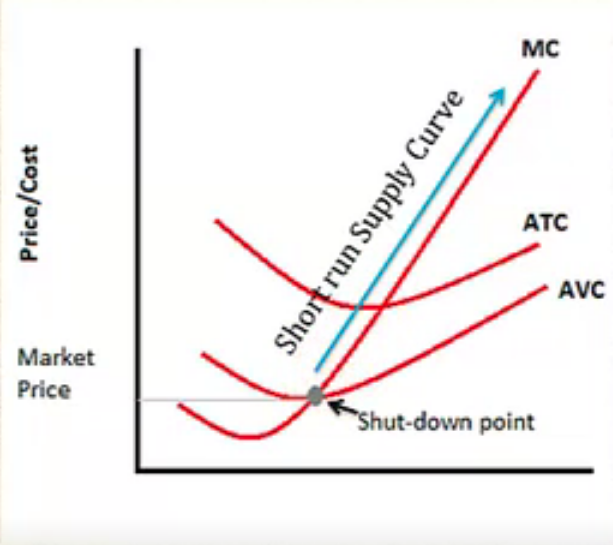 Because the firm will shut down when price does not cover AVC, that portion of the marginal cost curve (below the gray line) is not relevant since the firm will not produce.

They have to surpass the production threshold delineated by the shutdown point in order to justify producing. After that point, then they can realize some economies of scale, which is where their average costs begin to fall as they produce more.

This is why the short run supply curve is marginal cost once this production threshold can be reached, because at any point above the shutdown point, they will, in fact, produce--whether they are making a profit, breaking even, or producing at a loss to minimize losses in the short run.

summary
We began today's lesson with a brief review of profit and loss. Today we learned that in the short run, a firm may be earning a profit, breaking even, operating at a loss, or shutting down. We learned that average total costs and average variable costs help a firm in short run decision-making. For instance, if a firm cannot cover their variable costs, it will shut down. Lastly, we learned that the short run supply curve is the marginal cost curve above the shutdown point.