Or
Close Popup
+
2 Tutorials that teach Shut-down Point
Take your pick:
Previous Next

Identify the state of a firm based on information provided on a graph.

(more)
See More
Tutorial
what's covered
This tutorial will cover the shutdown point, when a firm is not profitable and must decide between shutting down or operating at a loss in the short run.

We know that profit equals revenues minus cost.

For the purposes of this tutorial, we'll be focusing on what happens when a firm sustains a loss.

Now, a loss is simply when expenses exceed revenue.

There are two different time frames that impact a firm's operation, and while today we are primarily focusing on the short run, it is important to note that there is a difference between short run and long run.

hint
The short run is defined by at least one fixed input or cost being present. Even if the firm produces nothing, they still have to pay rent, for example. Therefore, in the short run, they will just try to minimize losses.

In the long run, all inputs and costs become variable. An unprofitable firm can opt not to re-sign a lease and sell off their investment, getting completely out of the industry.

However, let's focus on the short-run for now.

2. Minimizing Loss in the Short Run

If a firm is sustaining a loss, their first option in the short run is to continue to operate at a loss.

They can hope that conditions improve and decide to operate at a loss in the short run, then exit the industry in the long run, once they can get out of their rent, for instance.

The other option is to shut down right now. They are not exiting the industry immediately, because they still have fixed costs that they cannot recover, that need to be paid, like rent.

hint
With either decision, the firm's fixed (sunk) cost must be paid.

In this option, perhaps they will exit the industry in the long run or re-open at a later date.

We need to compare these two options and see what will minimize their loss.

As mentioned, the firm still has a fixed cost regardless of what they do.

hint
In economics, we refer to this as a sunk cost or a cost that cannot be recovered.

Since they have to incur this sunk cost in either of the options, we primarily focus on variable costs instead, in the decision to shut down versus operate.

If they can make enough revenue to at least cover the cost of operating--meaning price is greater than their average variable cost (P > AVC), covering workers, materials, etc.--then they can put at least a little revenue towards this fixed expense.

However, if revenues will not even be enough to cover the cost of staying open (P < AVC), then it is better to simply shut down.

A shutdown is defined as the factors of production no longer operating.

Many seasonal businesses like ice cream stores and pool shut down during the off-season.

It doesn't mean that they are completely out of business forever; they are simply shutting down because they would make little or no revenue to justify operating in the winter.

Why would they pay employees to come in if they are not generating any business at all?

They are so profitable once they reopen in the summer that it makes up for the winter losses.

Factors of production no longer operate

An exit is a different situation. This is a long run decision where a shareholder sells the investment in a firm.

Comparing shutdown versus exit, shutdown is a short run decision to minimize loss. A company would shut down if prices are not covering their average variable costs or operating expenses.

They still have a fixed cost but the firm is not operating; they are not paying for labor, materials, or other factors of production.

An exit is a long run decision. They are selling off all investments in the firm, and there are no more fixed costs because everything becomes variable in the long run.

Let's look at it graphically.

When a firm produces where price equals average total cost, they are breaking even.

Anything above that, if P > ATC, they are profitable, which is not our focus in this tutorial, but it always helps to remember the larger context. 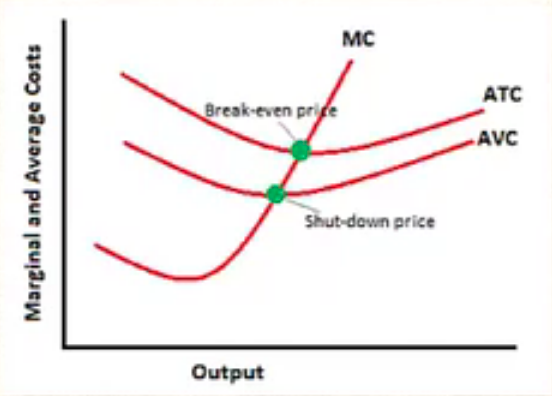 When a firm cannot cover its average variable costs (P < AVC), they should consider shutting down.

If a firm is incurring a loss anywhere between the breakeven price and shutdown price, they are going to operate, because they are covering over and above their average variable cost.

At the shutdown price, though, the firm is no longer covering their average variable costs, and that is when they should consider shutting down.

A shareholder sells the investment in a firm

summary
We began today's lesson by discussing profit and loss, learning that a firm is losing money when total revenue is less than total cost, or when price is less than average total cost. We learned that in the short run, an unprofitable firm can either operate at a loss or shut down, whichever option allow them to minimize loss in the short run. For instance, a firm should operate at a loss if it can cover its variable costs; otherwise, it should shut down.

We learned that the shutdown point is where price equals AVC. In the long run, the unprofitable firm can exit the industry and get out completely when they have no more fixed expenses.

A shareholder sells the investment in a firm.

Factors of production no longer operate.