Or
Close Popup
+
4 Tutorials that teach Significance Level and Power of a Hypothesis Test
Take your pick:
Previous Next

Significance Level and Power of a Hypothesis Test

Identify factors that influence the significance level and power of a hypothesis test.

Tutorial
what's covered
This tutorial will cover how to identify factors that influence the significance level and power of a hypothesis test. Our discussion breaks down as follows:

Before we begin, you should first understand what is meant by statistical significance. When you calculate a test statistic in a hypothesis test, you can calculate the p-value. The p-value is the probability that you would have obtained a statistic as large (or small, or extreme) as the one you got if the null hypothesis is true. It's a conditional probability.

If you’re not, meaning it's just too far away from the mean to attribute to chance, then you’re going to reject the null hypothesis in favor of the alternative. 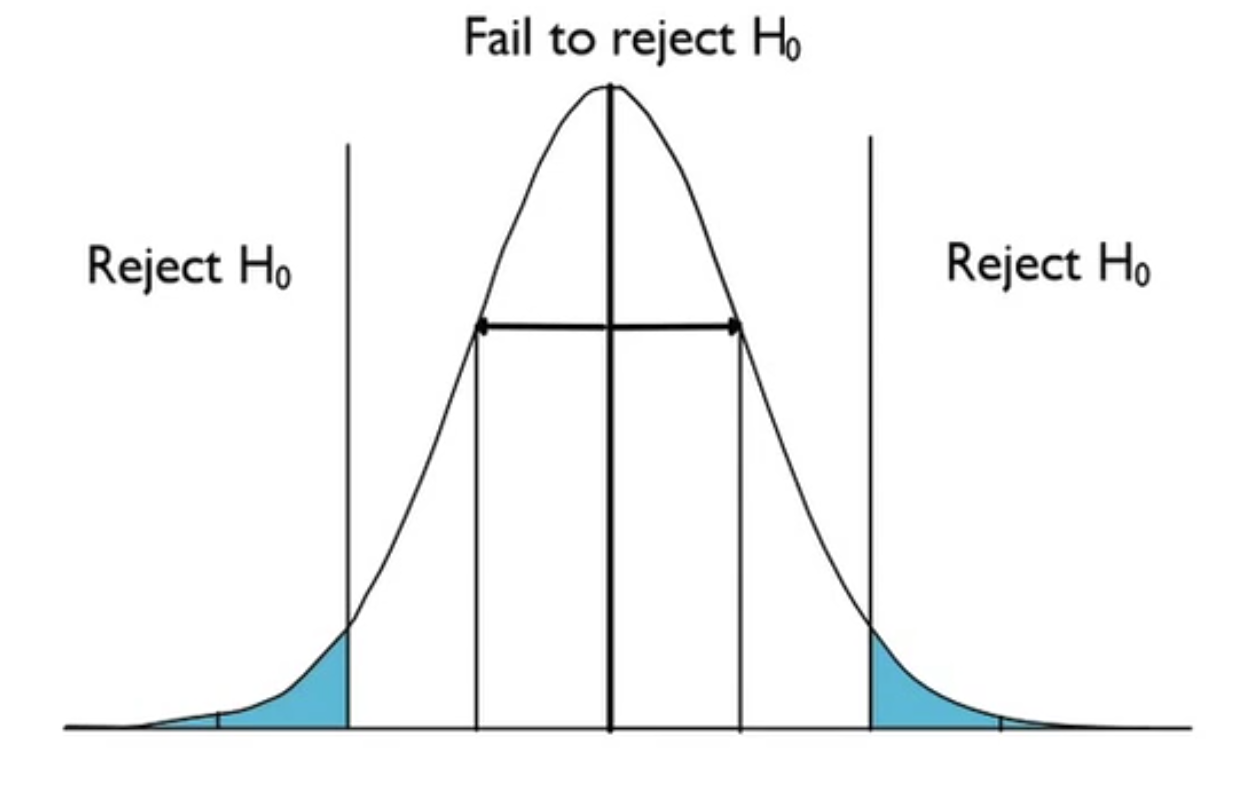 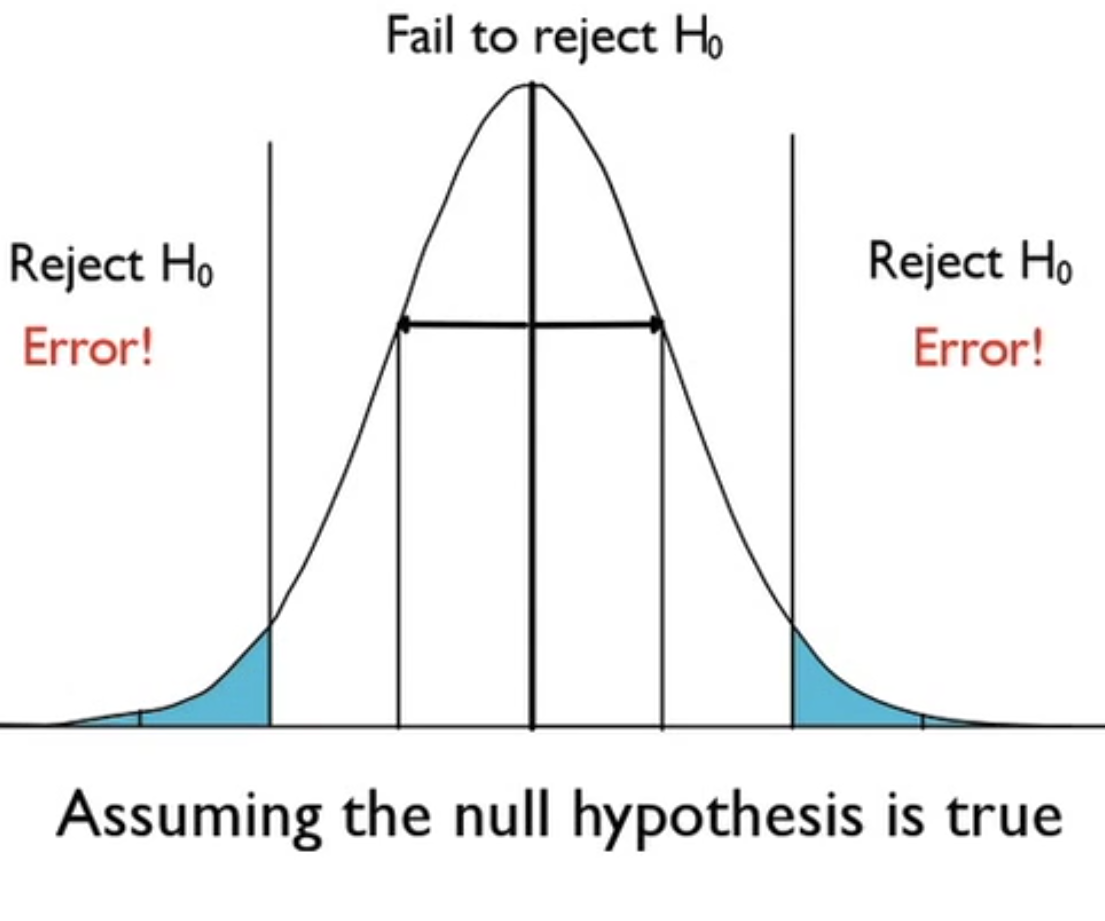 Fortunately, you get to choose how big you want this error to be. You could have stated that three standard deviations from the mean on either side as "too far away". Or, for instance, you could say you only want to be wrong 1% of the time, or 5% of the time, meaning that you are rejecting the null hypothesis in error that often.

This value is known as the significance level. It is the probability of making a Type I error. We denote it with the Greek letter alpha (

The probability of making a Type I error. Abbreviated with the symbol, alpha,


1a. Selecting an Appropriate Significance Level

When you choose how big you want alpha to be, you do it before you start the tests. You do it this way to reduce bias because if you already ran the tests, you could choose an alpha level that would automatically make your result seem more significant than it is. You don't want to bias your results that way.

Take a look back at this visual here. 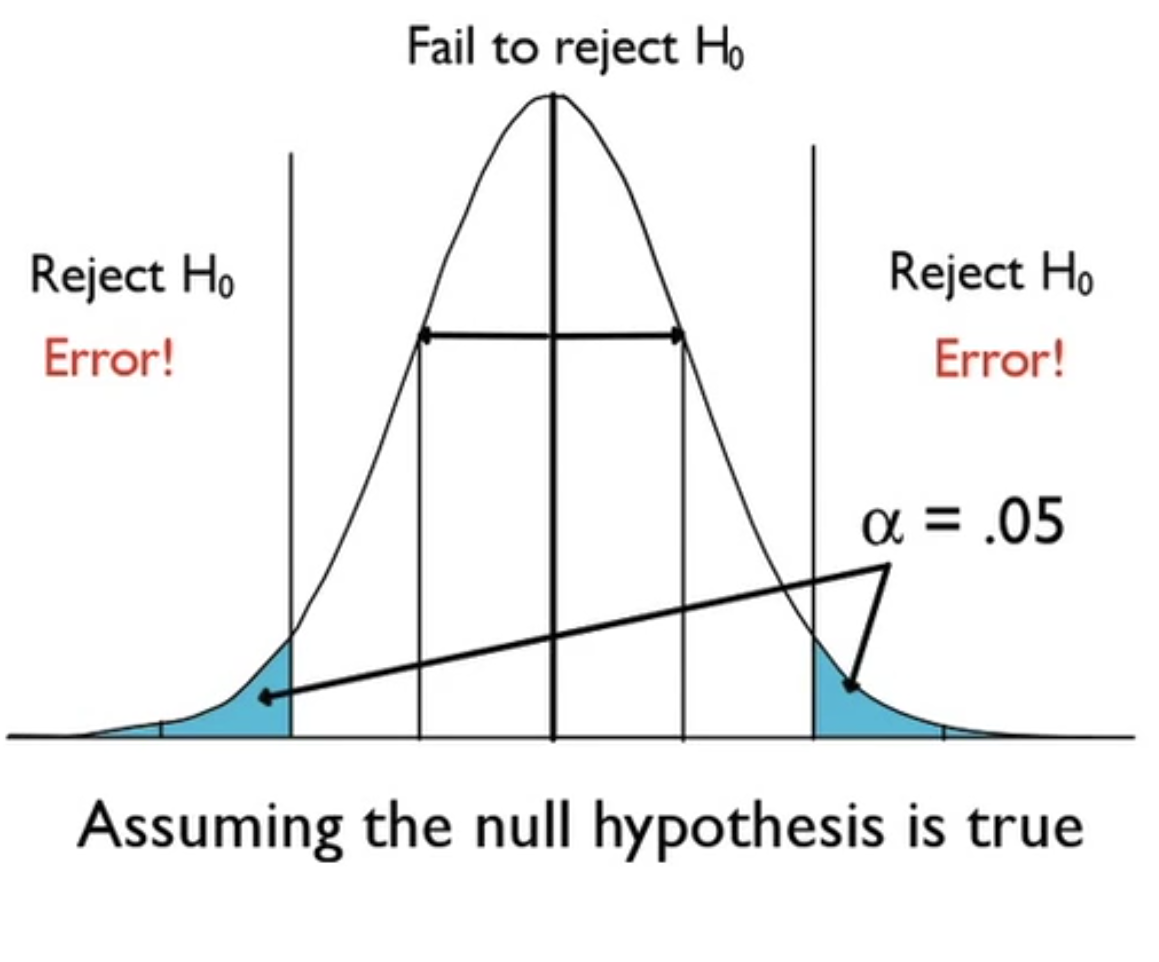 The alpha, in this case, is 0.05. If you recall, the 68-95-99.7 rule says that 95% of the values will fall within two standard deviations of the mean, meaning that 5% of the values will fall outside of those two standard deviations. Your decision to reject the null hypothesis will be 5% of the time; the most extreme 5% of cases, you will not be willing to attribute to chance variation from the hypothesized mean.

The level of significance will also depend on the type of experiment that you're doing.

1b. Cautions about Significance Level

It is important to note that you don't want the significance level to be too low. The problem with setting it really low is that as you lower the value of a Type 1 Error, you actually increase the probability of a Type II Error.

2. Power of a Hypothesis Test 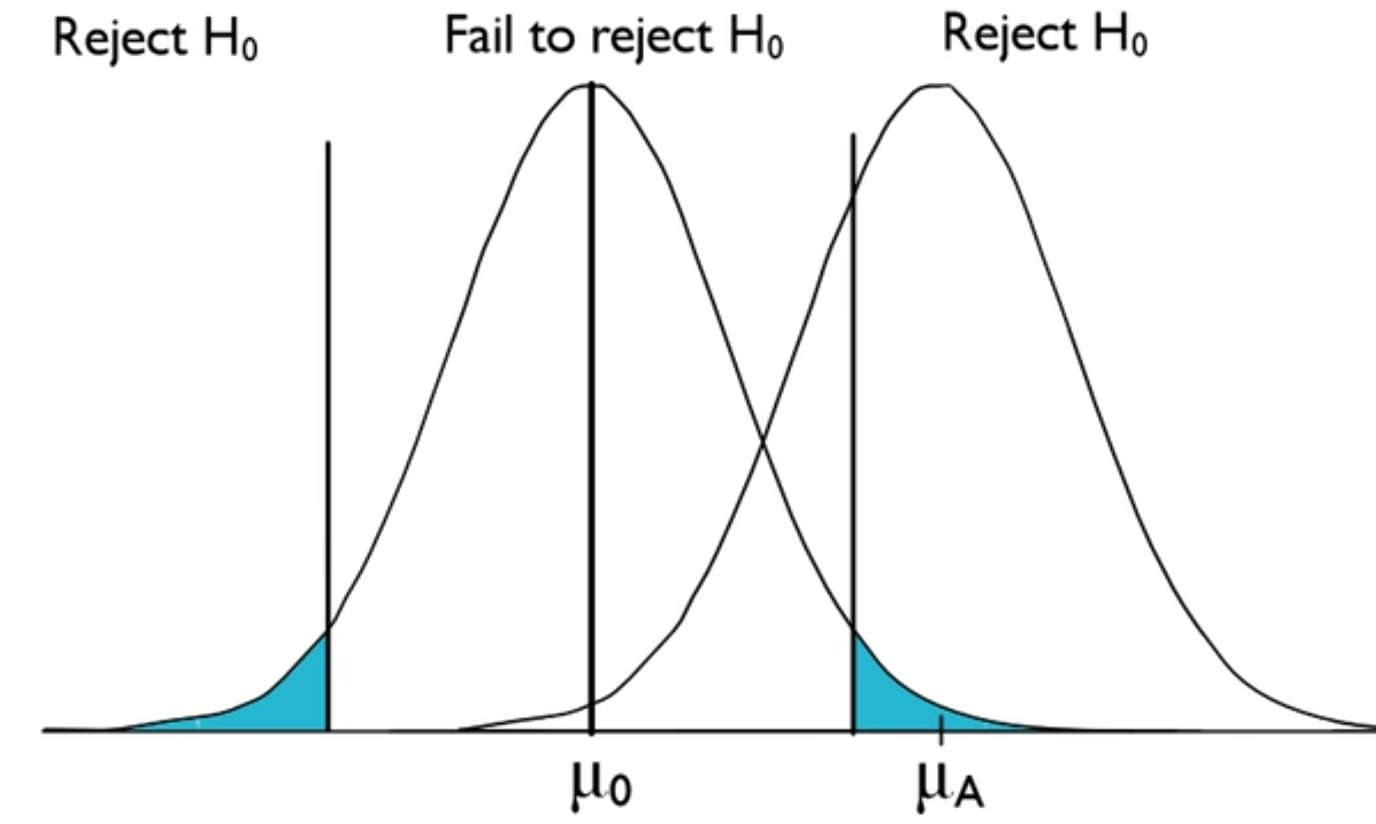 If you take a look at the curve below, it illustrates the way the data is actually behaving, versus the way you thought it should behave based on the null hypothesis. This line in the sand still exists, which means that because we should reject the null hypothesis, this area in orange is a mistake. 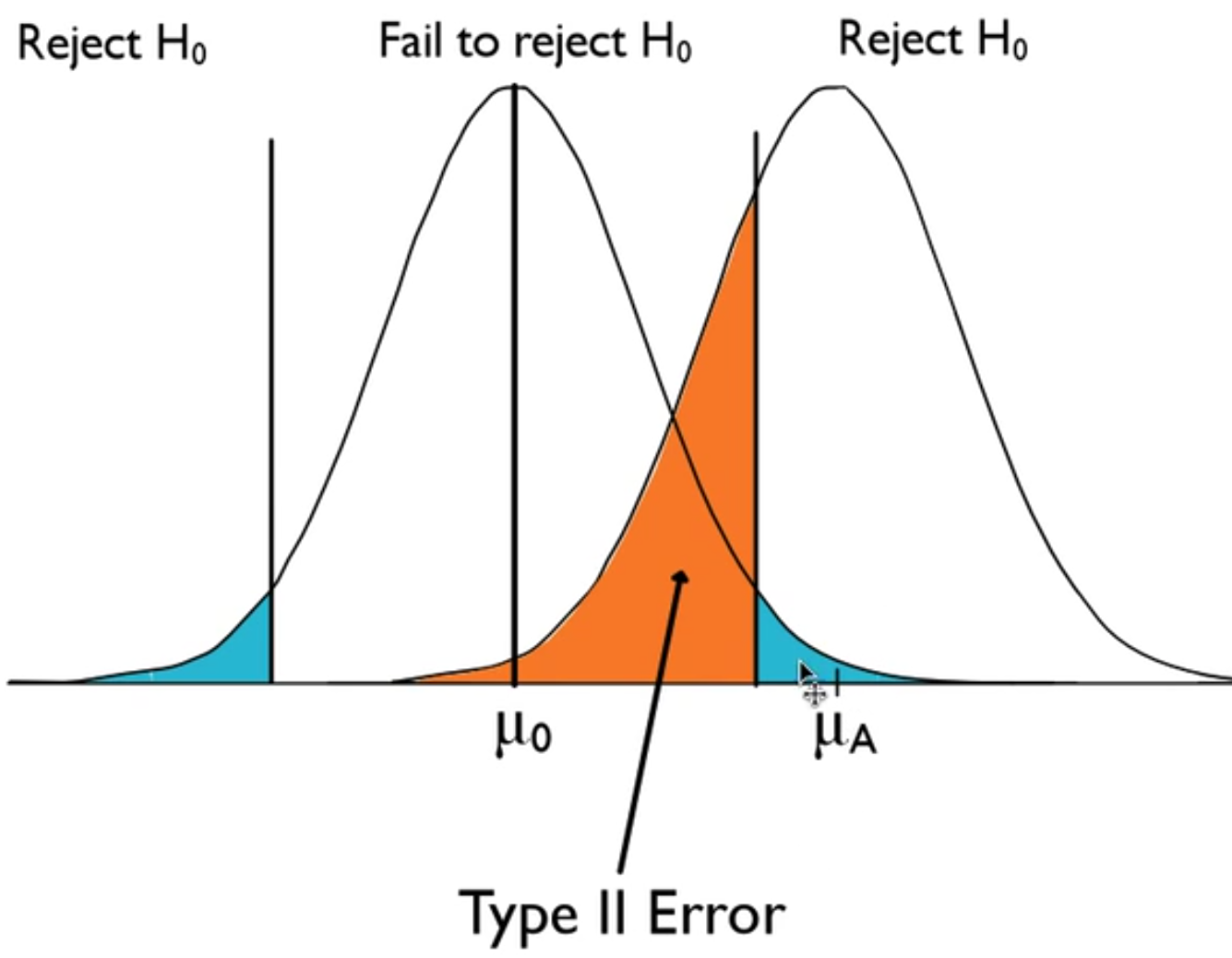 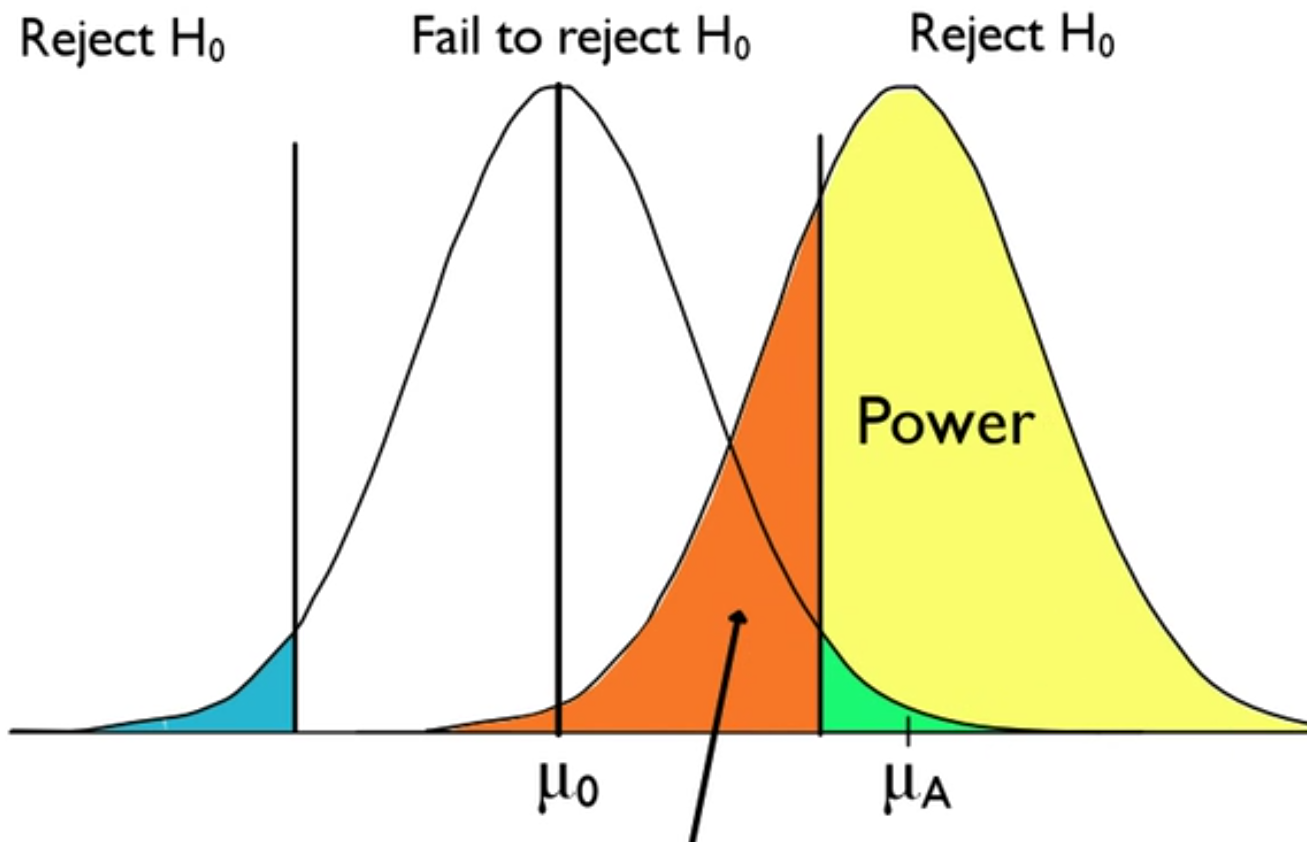 The probability of making a Type I error. Abbreviated with the symbol, alpha