Identify elements of using a simulation.

Tutorial
what's covered
This tutorial will cover the topic of simulation, through the definition and discussion of:

Suppose a family has five children. What's the probability that at least two of those five are girls?

You could figure this out in a tree diagram, but that would be an unwieldy tree diagram. You can use a simulation to figure out complicated problems like this one. This is also called the Monte Carlo method, named after Monte Carlo Casino because it uses physical objects like dice.

Let's approximate the probability using a simulation. Get five dice out and let the boys and girls be equally likely. Let's have faces 1 through 3 represent girls, and 4 through 6 represent boys.

One the second roll, this situation has four girls in it--the 2, 3, 3, and 1. Redo this many times, and the relative frequency of getting two or more girls will approximate the probability.

Suppose you do this 20 times, then analyze the results in the chart below.

This is the histogram of the number of girls per family. 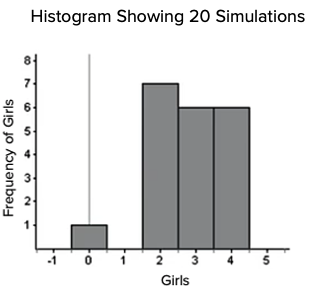 However, that is not the right answer. If you had done more simulations, you would have gotten a more correct answer because things would have started to even out. The graph below shows an approximation based on 10,000 simulations where 8,127 of the 10,000 had 2 or more girls. 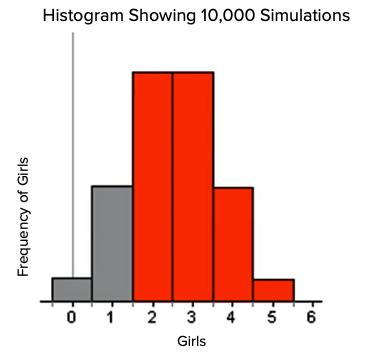 The right answer is, in fact, 0.8125, about 81% of the time. If you simulated more than 20 times with the dice, you would have gotten a more accurate response. So our sample of 20 was not truly representative. Apparently, having four girls is fairly uncommon. Two and three are very common.

A way to approximate probability based on trials of chance experiments that mimic the real-life trials.

summary
It's possible to solve complicated problems through a process called simulation (also known as the Monte Carlo method). First, come up with a method of simulation that has the same frequencies of what you're trying to predict. Second, run many trials of your simulation. Lastly, answer the question based on the frequencies from your simulated results.

A way to approximate probability based on trials of chance experiments that mimic the real-life trials.