Are you a teacher?

Are you a student?

Calculate the average rate of change in a given scenario.

302 Institutions have accepted or given pre-approval for credit transfer.

* The American Council on Education's College Credit Recommendation Service (ACE Credit®) has evaluated and recommended college credit for 30 of Sophia’s online courses. Many different colleges and universities consider ACE CREDIT recommendations in determining the applicability to their course and degree programs.

Imagine that we are planning a trip from Chicago, IL to Knoxville, TN. The most direct flight covers a distance of 475 miles in 1 hour. Dividing distance by time, we get a speed of 475 miles per hour. This represents the average speed, or average rate of change in distance over change in time. In reality, the plane travels at varying speeds, particularly during take off and landing, but generally speaking, we say that the airplane travels at a speed of 475 miles per hour.

On a graph, we see that the average speed is represented by a straight line, while the actually path of the plane may be non-linear: 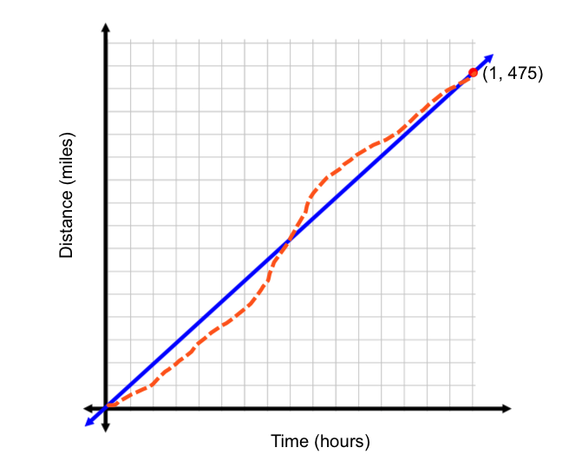 2. Average Rate of Change and Slope

As we can see from the graph above, the average speed of the airplane is the slope of the line. Recall that the algebraic definition of slope is change in y-values divided by the change in x-values. In this scenario, the change in y-values is 475, because the starting distance was 0 miles and the ending distance was 475 miles. Our change in x-values is 1, because at 0 hours we were at 0 miles traveled, and at 1 hour we were at 475 miles traveled.

To find average change, we need to figure out what the elevation over the mile marker distance would be. When considering her elevation, we will look at the change between each mile marker. From mile marker 2 to mile marker 12, Kristen went from 4,100 feet to 5,300 feet. This is a difference of (5,300 - 4,100) = 1,200 feet in elevation.

Take a look at the graphs below:

The first graph shows a relationship between distance traveled and gallons of gasoline that a car has in its tank. The negative slope indicates that as the car continues to travel, fewer and fewer gallons of gasoline remain in the tank. We can interpret the y-intercept as the amount of gasoline the car started with, and the x-axis as the number of miles the car travels until it runs out of gas.

The graph in the middle shows a relationship between the volume of an object and the temperature of its environment. The positive slope indicates that as the room temperature increases, or as the object gets warmer, it expands, increasing in volume.

The third graph shows a relationship between the amount of time an object travels and its speed. The slope of zero indicates that there is no change in speed during the time interval recorded on this graph. We could perhaps interpret this graph as being a car on the highway set in cruise control. When a car is set in cruise control, its speed is locked, and will continue to travel at a constant speed. With a constant speed, there is no change in speed from one time interval to the next.