Socrates: The Father of Western Philosophy

Distinguish Socrates' philosophical approach from those used by previous philosophers.

Tutorial
what's covered
Socrates (circa 470-399 BCE) was one of the most important philosophers of all time. Although he was not the first western philosopher, he is known as the “Father of Western Philosophy.” This is not only because of his influence on other significant historical figures, but also because he re-oriented philosophy to focus on the areas studied today. He was completely dedicated to living his philosophy, even though it cost him his life.

This tutorial investigates Socrates' life and work in four parts:

Socrates lived until the age of 70. For most of his adult life, he was a teacher of philosophy. He did not charge tuition, but his ability, wisdom, and pedagogy attracted Athenian pupils, many of whom came from wealthy and noble families. One of these pupils was Aristocles, better known as Plato.

Socrates taught Plato philosophy: not only how to seek wisdom, but also its importance. Plato started the Academy (and, arguably, higher education), and laid the foundations for western philosophy (and, perhaps, theology and political science). Plato’s influence and accomplishments were vast, but some portion the accolades he receives belongs to Socrates.

Plato also taught an important pupil: Aristotle. Aristotle was a philosopher and scientist. He may have done more to advance science than anyone else. He is known as the father of physics, biology, and logic, and was a major contributor to the development of western thought. His work influenced the doctrine of the medieval Catholic Church, and was disseminated throughout the western world as a result.

Like Plato, Aristotle's accomplishments and influence cannot be overstated. However, he could not have achieved what he did without his teacher, Plato, and Plato's teacher, Socrates. These philosophers and their accomplishments are discussed in more detail in later tutorials.

It is in no way an exaggeration to say that Socrates was one of the most influential people in history. Like some of the other significant ancient thinkers, he did not produce any written work. The accounts we have of his life and teachings were primarily recorded by Plato.

Socrates' historical influence has continued to this day, but it is important to understand that, during his life, he oriented philosophy in new directions. Recall that the Pre-Socratics were given their name because their methods, and the topics they investigated, were different than those that are the focus of contemporary philosophy. Socrates redirected philosophy to consider topics that are studied to this day.

The Pre-Socratic philosophers primarily studied cosmology and natural philosophy, fields that were later appropriated by the sciences. Ethics and epistemology, on the other hand, have not (and probably cannot) be appropriated by other fields of study. These were the topics of greatest importance to Socrates. He sought wisdom. How to live according to ethical principles, and how to differentiate knowledge from opinion, were questions that must be answered to attain true wisdom. Socrates was the first moral philosopher and the first epistemologist.

big idea
Though all of these thinkers investigated many areas of philosophy, the ways in which Socrates changed the direction of philosophy can be simplified as follows:

3. The First Step on the Path to Wisdom

How did Socrates distinguish knowledge from opinion? First, it is a distinction in belief. But secondly, the distinction is not in what you believe, but in why you believe it. Two people can believe the same thing, but one knows why he or she believes; the other merely believes.

What’s the difference? The answer involves the all-important philosophical question — why? If you ask someone, “why do you believe x?”, and he or she provides a reasonable answer that is grounded in fact, that person knows x. If you ask why, and receive no answer, or a bad answer (i.e., one that is not grounded in reason or fact), that person has an opinion about x, but does not know it. 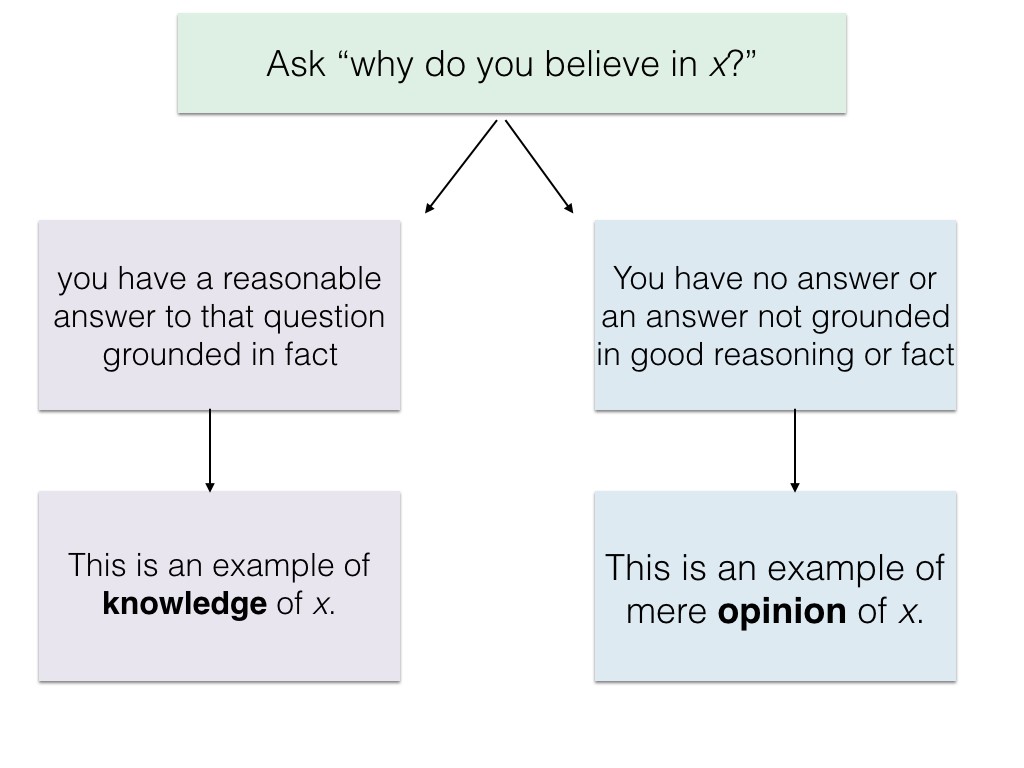 Here are some of the most common sources of bad answers:

4. Socrates, A Martyr for Wisdom

As the previous thought experiment demonstrates, it is easier to recognize the mistakes of others than those we make. It is easier to say than to do, to "talk the talk" than "walk the walk." One of the most important aspects of Socrates’ legacy is that he lived what he taught, no matter the cost.

While teaching (and learning) philosophy in Athens, asking “why” questions (he referred to himself as a gadfly), Socrates irritated people, and it got him into trouble. He was charged with corrupting the youth, and put on trial (this trial will be examined in detail in a subsequent tutorial). Socrates presented his own defense, but did so in philosophical terms. He refused to use rhetorical tricks like the sophists, and did not appeal to emotions (e.g., by bringing in crying family members before sentencing). He refused punishment by exile that would have required an implicit admission of regret for his conduct, and an end of his teaching. Had he accepted exile, he would have avoided execution.

It's unnecessary to speculate whether he was willing to die for his beliefs, or just believed that he was doomed either way. Later, his friend Crito provided him with an opportunity to escape from prison before his execution, but Socrates did not take it because he believed that it would be morally wrong for him to do so.

It may be tempting to reason as Crito did and point out how much good Socrates could have done if he had escaped and resumed teaching. However, if Socrates had, in opposition to his teachings, escaped, would we be reading about him today? Would he have inspired Plato to pursue philosophy? Would we revere him for acting in a self-serving way, instead of doing what he believed was right?

We remember and revere Socrates because he was one of the few who lived, and died, according to his beliefs.

summary
In this tutorial, we introduced Socrates, the patriarch of western philosophy, and compared his methodologies to the philosophers who preceded him. His intellectual offspring, including Plato and Aristotle, were incalculably important to the development of western civilization. Socrates reinvented philosophy as the discipline that it is today. He taught by example, and lived what he taught even though it cost him his life.
Attributions
Terms to Know