Or
Close Popup
+
4 Tutorials that teach Standard Scores and Z-Scores
Take your pick:
Previous Next

Calculate a z-score using a given value and the corresponding mean and standard deviation.

(more)
See More
Tutorial
what's covered
This tutorial will cover the topic of z-scores. Our discussion breaks down as follows:

Z-scores are values that allow you to make one-to-one comparisons between a couple of different distributions. Often, you want to compare two things, but it's not really fair to compare them directly. Z-scores help with this.

Suppose you are taking a math class. For the first exam of the year, the class mean was 88 points, and the standard deviation was 5. You scored a 92, so you did better than the class average. The second test was much harder. You scored an 80, which is a lot worse than you did the first time, but the class mean was 74. So, even though your score went down, the class average also went down. The standard deviation, this time, was 4 points. Did you do better on the first or the second test, relative to your classmates?

In the above example, the actual z-score for the first test is positive 4/5: positive 4 means above the mean, and divided by 5, the standard deviation.

But how do you get this calculation? You use this formula:

The z-score (represented by z) is equal to the raw score (x) minus the mean (mu), divided by the standard deviation (sigma).

What does this mean? Because positive 1.5 is larger than positive 0.8, your score on the second test was, in fact, better relative to the rest of the class.

The other thing that's worth noting is that a z-score can be negative. If you're subtracting a bigger number from a smaller number (i.e., if the raw score is a smaller number than the mean), then you'll end up with a negative value.

How are z-scores used in standard distributions? Let's explore an example.

Men's heights follow a normal distribution, with a mean of 68 and a standard deviation of 3. 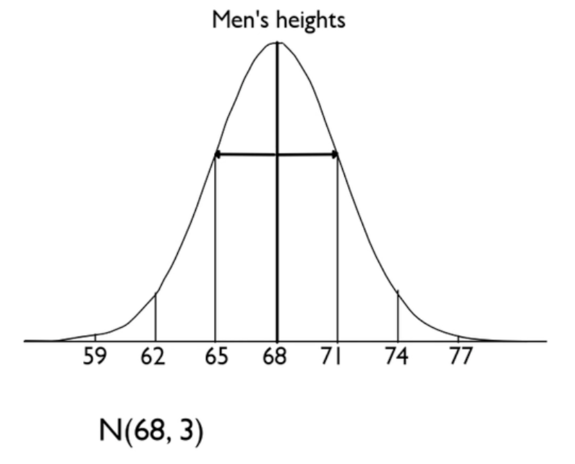 A z-score of negative 3 tells us that 59 is three standard deviations below the mean. If we convert all these values into z-scores, what would that normal distribution look like? 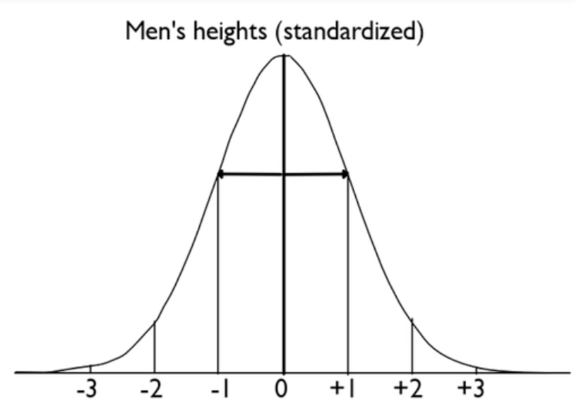 Since the noted numbers are integers of standard deviations away from the mean, and that's what z-scores measure, each can be represented by z-scores.