A sequence is a set of numbers in a particular order. For example, {4, 7, 10, 13, 16} is a sequence. It has elements or terms in curly braces (which define it as a set), and the terms are in numerical order (increasing in value). One application of sequences is to add the terms together. We call this a series. Let's review these terms and their definitions:

A set of numbers in a particular order.

The sum of the first n terms in a sequence. 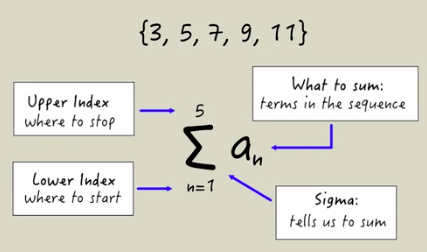 This notation tells us to sum the values of terms in a sequence, starting with the first term and ending with the fifth term. How was this information drawn out from this notation? The big E-like symbol is the Greek letter sigma. This is what tells us to sum. What exactly are we summing? That's written directly to the right of sigma. an represents the value of the n-th term to a sequence. Finally, we see expressions above and below sigma. Below is the lower index, which tells us where to start. In this case, the lower index is 1. The 5 above is the upper index, and tells us where to stop summing. So this is telling us to evaluate

, where each of these terms represents the values of the first, second, third, fourth, and fifth terms of a sequence, respectively.

an expression of a series, using the Greek letter sigma, and a lower and upper index to indicate the first and last terms of the sum.

Next, let's practice using a defined sequence and summation notation to evaluate a series.

Notice, however, that this is now an infinite sequence, meaning that more terms follow 8. How can we interpret what we are asked to sum from the following notation:

We should first note what this is asking us to sum. This is telling us to add values of terms in a sequence. Our sequence is defined as

, so this is asking us to add together terms in that particular sequence. Next, we should examine the lower index, which tells us what term is the start to our sum, as well as the upper limit, which tell us which term will end the sum. In this case, the lower limit is 2 and the upper limit is 4. The notation tells us to add together the second through fourth terms of the sequence. The second term is 8, the third term is 4, and the fourth term is 0.

summary
When defining sequences and series, we can say that a sequence is a set of numbers in a particular order and a series is the sum of the first n terms in a sequence. Summation notation is an expression of a series from a lower index term up to and including an upper index term. When evaluating a series using summation notation, it is important to note what it is asking us to sum.
Terms to Know

a set of numbers in a particular order

the sum of the first nth terms in a sequence

an expression of a series, using the Greek letter sigma, and a lower and upper index to indicate the first and last terms of the sum