Identify the meaning of the concept of "summum bonum" in religion

Tutorial
what's covered
In the study of religions, you often come across references to language and language use. This is very helpful because it can add a lot of depth to our understanding of the concepts. This lesson covers the latin term Summum bonum by looking at:

While many religions might share certain language roots, different historical periods reveal the traits of that culture and time. Often one language or another is specific to a time and the thought of its culture.

When a concept is in a foreign language, it is best to start with a definition. Summum bonum is a Latin term used extensively in philosophy and theology. It was used a lot during the Middle Ages in Europe. It means the “highest good,” and, in this case, refers to the Christian and Jewish ideals of virtue and action.

Righteousness is often the term that is translated from the Old and the New Testaments. It is the idea of the human good in some kind of a relationship with the highest good. Both the Hebrew and Christian scriptures have hundreds of examples and references to the good in both the human and the divine realms.

think about it
What is good? What is righteous?

These are hard to define, so the term summum bonum was used in Europe in the Middle Ages as a way of integrating theology with ancient Greek philosophy.

During the Renaissance, there was a return to ancient Greek philosophy, such as works of Plato and Aristotle. Ancient Greece was guided by the ideal of the highest good. It had to do with human flourishing, an ethical life, and the welfare of society. Society was the product of individual and collective alignment with this highest good.

Plato writes in his Dialogues that one must find one’s root toward action and speech in the world, such that it is a proper expression of this highest good. For Plato, the highest good was contemplation of the idea and the form of the good from which come all things that are just, true, beautiful, sacred, and good.

That which is set apart from the ordinary, the worldly, and the mundane.

In a certain sense, summum bonum was thought to exist eternally in the realm of the transcendent. Any approach to the good life had to be accompanied by the discipline of contemplation and reasoning, leading to some kind of intuition and insight into the form of the good. Action in the world was a conscious striving for the good.

That which is beyond the ordinary.

In the Middle Ages, this was understood as the contemplation of God informing action and ethical life in the world. This transcendent realm was the sacred. It was beyond the ordinary world experience with the senses. Contemplation often meant prayer, but it also involved many intellectual challenges and commitments, such as the rational problem of faith.

In both ancient Greece and medieval European Christendom, communion with the realm of the transcendent was an expression of summum bonum.

This was the orientation of medieval Jewish philosophy. This is a clear example of how sommum bonum was used as a tool to unify many elements of Aristotelian or ancient Greek thought with the Judaic tradition. This is expressed in the writings of Maimonides. In his Guide for the Perplexed, he combines many elements of Aristotelian thought with an understanding of the Talmud and the Torah. 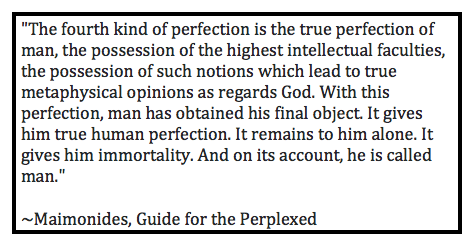 During the Middle Ages, there was a lot of creative exchange, conflict, and debate, but productive religious exchange, in this case among the monotheistic traditions. Many Jewish philosophers were influenced by certain strands of Islamic thought, such as the relationship between Averroes and Maimonides and their mutual references to Aristotle.

They both believed that the summum bonum of life was the protection of the intellect as a means of understanding God and a study of philosophy and the sciences. All must be supported by the work of an ethical, pious life. Both Averroes and Maimonides referred to the central grounding importance of duty and law for piety and moral striving to be effective.

summary
Summum bonum is a Latin term that means the “highest good.” Certain religions might share common language roots, and if you look at it in a particular context in time, you’ll see how the thought of that culture is expressed. The Middle Ages was a time of great religious excitement, exchange, conflict, and debate between the monotheistic religions. Islam, Judaism, and Christianity all had some notion of the highest good. These ideas were expressed and shared among philosophers and among theologians in the Middle Ages. The idea, however, of the highest good goes back much farther. This lesson looked at ancient Greece, particularly the thought of Aristotle and Plato.

Source: This work is adapted from Sophia author Ted Fairchild.

That which is set apart from the ordinary, the worldly, and the mundane.

That which is beyond the ordinary.