Or
Close Popup
+
2 Tutorials that teach Surplus and Constraints
Take your pick:
Previous Next

Determine the results of of binding and non-binding constraints.

(more)
See More
Tutorial
what's covered
This tutorial will cover the topic of binding and non-binding constraints, focusing on how consumer and producer surplus are used to determine the impact of different government policies.

In most cases, free markets function wonderfully with little or no government intervention. Producers have a profit motive to provide consumers with what they want at prices they are willing to pay.

Therefore, unregulated free markets generally provide the best outcome, which is an idea to keep in mind as we continue this discussion.

Now, when we refer to overall welfare being maximized, we mean that when the market reaches equilibrium, both consumers and producers are better off. In addition, there is no deadweight loss, which we will cover later in the lesson.

However, we know that sometimes the government does intervene, and it is important to be able to measure this impact on consumers, producers, and society as a whole.

1a. Consumer and Producer Surplus


Consumer surplus is determined by the difference between the actual price paid for a good and the highest amount a consumer would be willing to pay for the good.

If, for example, you were willing to pay $100 to see a concert, but you bought a ticket from someone for $60, then you enjoyed a consumer surplus of $40.

On the other hand, producer surplus is the difference between the actual payment for a good and the least amount that producer would have agreed to receive for the good.

Suppose you are selling baseball cards on eBay, and you decide that you are willing to accept as little as $25 for one of the cards. Then, someone offers you $40 for the card. In this case, you enjoyed a producer surplus of $15.

Let's begin this section with an example. This graph represents the market for apartments, assuming a rather expensive city like New York City. 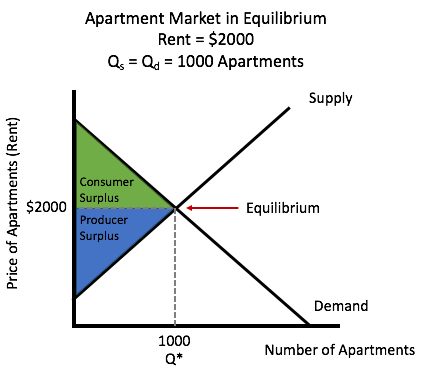 Note the point of equilibrium in the market. According to this graph, if we allowed the market to achieve equilibrium, then the equilibrium rent would be $2,000, and there would be 1,000 apartments supplied and demanded at that point.

However, many people are unable to afford this high rent. Often the government will step in and control rents, imposing a maximum price that landlords are allowed to charge.

Now, suppose the government sets a maximum price of $2,500, meaning that landlords cannot charge any higher rent than $2,500 per month. This action would set a ceiling. Now, you might think that a ceiling should be above equilibrium, because technically speaking, a ceiling is above one's head, but would that have any market impact at all?

In reality, landlords only want to charge $2,000, because that is the price that clears the market. If they set a maximum price above $2,000, it would actually have no market impact.

In this case, if landlords are mandated not to charge more than $2,500, it will not have any impact, because they only want to charge $2,000. This is what is called a non-binding constraint, a pricing constraint that does not preempt market equilibrium.

A pricing constraint that does not preempt market equilibrium

A binding constraint, on the other hand, is different. This is typically a regulatory constraint that does preempt market equilibrium by setting a different price level, known as a price ceiling or a price floor. In this case, the market cannot establish equilibrium.


Here is our apartment market graph again; only let's say that the government has stepped in and set a ceiling with the maximum allowable rent charged at $1,200. 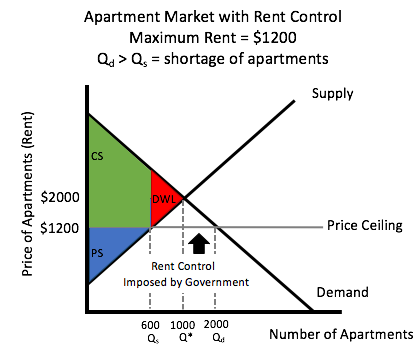 In addition, the red triangle represents what used to be enjoyed by both consumers and producers, known as a deadweight loss to society, which we will define shortly. Basically, that is what is lost between consumer and producer surplus to society whenever the government imposes a binding price ceiling.

hint
Rent control is a good example of a price ceiling. 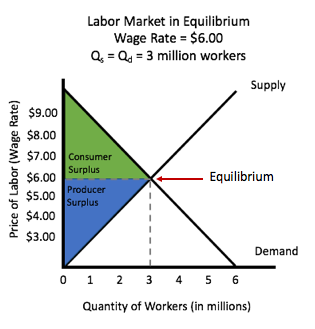 However, the government does not allow companies to pay workers $6 per hour, because of the minimum wage law. Now, if the labor market were allowed to be in equilibrium, there would not be a deadweight loss to society. Consumer and producer surplus would be maximized as shown by the green and the blue triangles below. 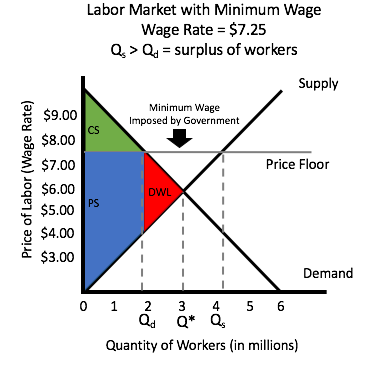 However, as mentioned, the government does set a price floor, which is another example of a binding constraint. A price floor is a minimum amount that must be paid for something. So, the current minimum wage of $7.25 is above equilibrium. This is the lowest amount that employers can pay.

Notice in the graph that consumer surplus, the green triangle, is now much smaller. Producer surplus grows a bit, but once again you can see this red triangle, which used to be consumer and producer surplus. It is a deadweight loss to society because of this price floor being imposed.

hint
Minimum wage is an example of a price floor or a binding constraint.

This red area that represents deadweight loss is the change in total surplus. It is the sum of producer and consumer surplus that was lost, resulting from the imposition of a binding constraint, either a price ceiling or a price floor.

Determined by the difference between the actual price paid for a good and the highest amount a consumer would have paid for the good.

The change in total surplus (sum of producer and consumer surplus) that results from the imposition of a binding constraint.

A pricing constraint that does not preempt market equilibrium.

The difference between the actual payment for a good and the least amount a producer would have agreed to receive for the good.