Recognize the effects of the tax system on corporate taxes

Tutorial
what's covered
In this lesson, you will learn about the effects of the tax system on corporate taxes. Specifically, this lesson will cover:

Income taxes in the United States are an enormous and complex issue. Corporate taxes are especially complicated because of the inherent complexities of corporations themselves. Corporations may be taxed on their incomes, property, or their very existence. The types and rates of taxes vary depending on the jurisdiction in which the corporation is organized or acts.

Maryland imposes a tax on corporations organized within its borders based on the number of shares of capital stock they issue.

Corporate taxation differs depending upon the legal form of the corporation. Which legal form to take is driven by the objectives of the company, but taxation also plays a vital role. Tax law contains built-in trade-offs for each corporate form, and companies often must give up some liability protection or flexibility.

In the US, federal rates range from 15% to 35%. States charge rates ranging from 0% to 10%, deductible in computing federal taxable income. Some cities charge rates up to 9%, also deductible in computing federal taxable income. Corporations are also subject to property tax, payroll tax, withholding tax, excise tax, customs duties and value added tax. However, these are rarely referred to as “corporate tax.”

The limits or territory within which authority may be exercised.

A tax deduction is a sum that can be removed from tax calculations. Specifically, it is a reduction of the income subject to tax. Often these deductions are subject to limitations or conditions.

Expenses incurred in order to generate profit for a company are referred to as business expenses. These can be categorized into cost of goods sold and ordinary expenses – also known as trading or necessary expenses.

An ordinary expense could be interest paid on debt, or interest expense incurred by a corporation in carrying out its trading activities. Such an expense comes with limitations, though, such as limiting the amount of deductible interest that can be paid to related parties.

Other types of expenses such as non-business expenses may be tax deductible as well. A loss recognized on a non-business asset is typically classified as a capital loss. This can have an impact on one's realized capital gains and must be accounted for appropriately.

Corporate taxes in the United States are considered to be progressive. That is to say, taxes are charged at a higher rate as income grows. To fully understand the effect of tax deductions, we must consider the marginal tax rate, which is the rate of tax paid on the next or last unit of currency of taxable income. The marginal tax rate is dependent upon a jurisdiction’s tax structure, usually referred to as tax brackets. To determine the after-tax cost of a deductible expense, we simply multiply the cost by one minus the appropriate marginal tax rate.

Tax deductions and tax credits are often incorrectly equated. While a deduction is a reduction of the level of taxable income, a tax credit is a sum deducted from the total amount of tax owed. It is a dollar-for-dollar tax saving. For example, a tax credit of $1,000 reduces taxes owed by $1,000, regardless of the marginal tax rate. A tax credit may be granted in recognition of taxes already paid, as a subsidy, or to encourage investment or other behaviors.

Profit that results from a disposition of a capital asset, such as stock, bond, or real estate due to arbitrage.

Many tax systems require that the cost of items likely to produce future benefits be capitalized. Such assets include property and capital equipment that represent a commitment of resources over several periods. In accounting, the profits (net income) from an activity must be reduced by the costs associated with that activity.

When an asset will be used in operations for several periods, tax systems often allow the allocation of the costs to periods in which the assets are used. In the U.S., this allocation is known as depreciation expense. It is important to reasonably estimate the useful life of the asset under depreciation in time-units. Then it is important to calculate the corresponding depreciation rate that will result in extinguishing the value of the asset from the books when the estimated useful life ends. There are several methods for achieving this goal.

big idea
Depreciation expense affects net income in each period of an asset’s useful life. Therefore, it can be deducted from taxes owed in each of these periods. In other words, depreciation allows a company to properly identify the amount of income it generates in a given period. As with all expenses, a dollar of taxes that a company can defer until later is a dollar that can be used in profit generating operations today.

The estimated value of an asset at the end of its useful life.

To wipe out a debt, liability, etc., gradually or in installments.

In the US, there is a broad variety of state, local, and federal taxes that must be taken into account. Below is a chart that depicts the level of tax received by the United States federal government from each source in 2010. 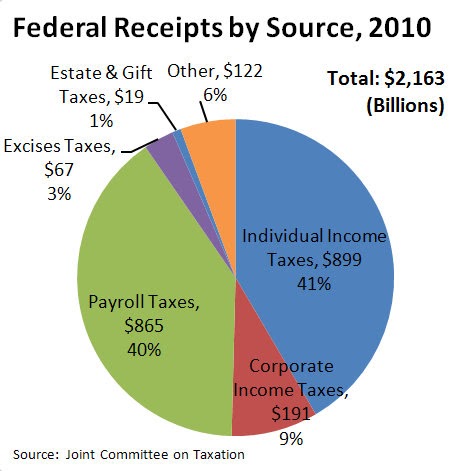 When one has a complex income, owns multiple properties, or is involved in the importation of goods, it is best to solicit the services of a tax professional, such as a certified public accountant (CPA).

Individual taxes can generally be defined as either direct or indirect.

Personal income tax is generally the largest source of tax revenue in the United States. Taxes based on income are imposed at the federal, most state, and some local levels. Income tax is levied on the total income of the individual less deductions reducing an individual’s taxable income, and credits, a dollar-for-dollar reduction of total tax liability.

The tax system allows for personal exemptions, as well as certain “itemized deductions,” including:

Income tax is often collected on a pay-as-you-earn basis (i.e., withholding taxes from wages). Small corrections are usually made after the end of the tax year. These corrections take one of two forms: payments to the government for taxpayers who have not paid enough during the tax year; and government tax refunds for those who have overpaid.

Federal and many state income tax rates are graduated or progressive–they are higher (graduated) at higher levels of income. The income level at which various tax rates apply for individuals varies by filing status. The income level at which each rate starts generally is higher; therefore, tax is lower for married couples filing a joint return or single individuals filing as head of household. Individuals are subject to federal graduated tax rates from 10% to 35%. State income tax rates vary from 1% to 16%, including local income tax where applicable.

A status defining the type of tax return form an individual will use, which is based on marital status and family situation.

Other individual taxes include:
summary
In this lesson, you learned about corporate taxes and received a brief overview of the tax treatment of different types of corporations in the United States. Corporations pay many different kinds of taxes, but benefit from tax deductions for business expenses incurred in order to generate a profit. Tax deductions, not to be confused with tax credits, reduce corporate taxable income. Depreciation expenses also reduce taxable income, and may be calculated through the straight-line method, the declining balance method, or through activity depreciation methods. Individual taxes in the United States comprise the largest source of income for the government, and take the form of income taxes, payroll taxes, sales tax, property tax, and gift and estate taxes.

Source: THIS CONTENT HAS BEEN ADAPTED FROM LUMEN LEARNING'S “TAX CONSIDERATIONS” TUTORIAL.

To wipe out (a debt, liability etc.) gradually or in installments.

Profit that results from a disposition of a capital asset, such as stock, bond, or real estate due to arbitrage.

A status defining the type of tax return form an individual will use, which is based on marital status and family situation.

The limits or territory within which authority may be exercised.

The estimated value of an asset at the end of its useful life.