Or
Close Popup
+
2 Tutorials that teach Taxation and Subsidy
Take your pick:
Previous Next

Differentiate between the results of a tax and a subsidy.

Tutorial
what's covered
This tutorial will cover how to interpret the effect of taxes and subsidies on both consumers and sellers.

"In this world nothing can be said to be certain, except death and taxes."

"Death, taxes and childbirth! There's never any convenient time for any of them."

--Margaret Mitchell's line from her book Gone With the Wind, 1936

The point is that nobody likes to pay taxes. However, most of us recognize that if our government wants to accomplish anything, we have to pay taxes--to some extent, at least.

So, what exactly is the effect of a tax? Let's look at a regular supply and demand graph.

In the graph, notice we have a supply curve 1 and a demand curve which initially results in equilibrium at the intersection of P* and Q1.

Now, whenever there is a tax, this is going to shift supply up and to the left, to supply curve 2. 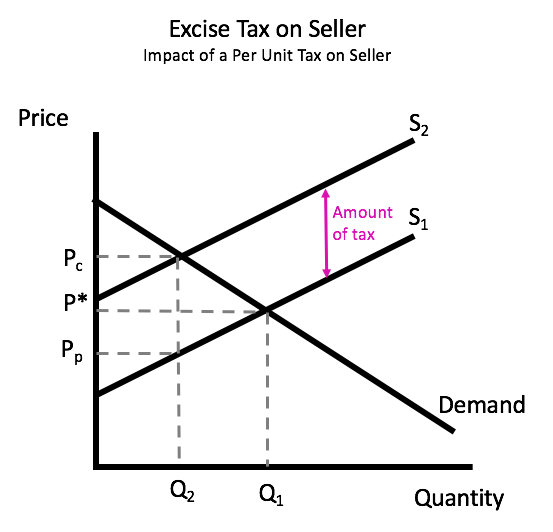 Remember, the tax is what a producer is going to have to pay back to the government because here it is a per unit tax on sellers.

This increases their cost of production, which shifts supply to the left.

This will increase the price that consumers pay, noted as the new market price, Pc.

At the same, it is going to decrease the price that producers receive, Pp.

Therefore, the amount of the taxes is the vertical distance between the supply curves.

Even though Pc is what consumers are paying, it is not what producers are receiving because they have to pay the amount of the tax to the government. In reality, they are receiving the price labeled Pp.

Notice, too, that the equilibrium quantity has decreased from Q1 to Q2.

Now, if we were looking at a per unit tax on sellers, or consumption, instead, it would have the same impact, where consumers pay higher prices and producers receive lower prices, except that the new market price would be what sellers receive.

A subsidy is a different scenario. It is support offered by the government to a business or individual to incentivize production of a good or service.

hint
In other words, a subsidy is meant to give an incentive to produce more or to produce something in general.

Here is the same supply and demand graph. However, this time, the subsidy is going to decrease the cost of production or offer an incentive to produce more.

Therefore, supply shifts to the right and the vertical distance between the supply curves is the amount of the subsidy. 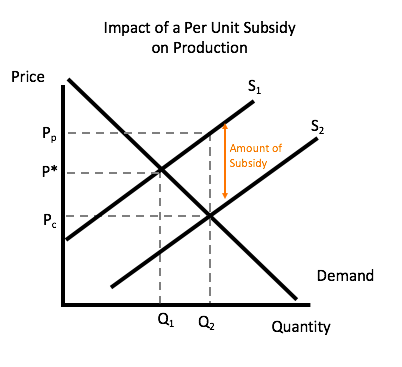 Notice that P* represents the initial equilibrium price and quantity. Now that supply has increased, the price that consumers pay falls to Pc.

The price that producers are receiving increases to Pp.

Again, if we look at a per unit subsidy on consumption versus production, it would have the same impact in the end.

However the new market price would be flip-flopped. Instead of what consumers are paying, it would be what sellers are receiving.

3. Effect of Elasticity on Taxes

Now the question is, who bears the burden? Who ends up paying more of the tax--the consumer, the producer, or both?

Usually, it is going to be a combination of them, but it really depends on the good or service.

It is the elasticity that will show us who bears more of the burden.

Here is a very inelastic demand curve, where the demand is certainly more inelastic than the supply.

hint
Remember, with inelastic demand, consumers do not respond much to a price change; they continue to purchase the good or service as prices rise. 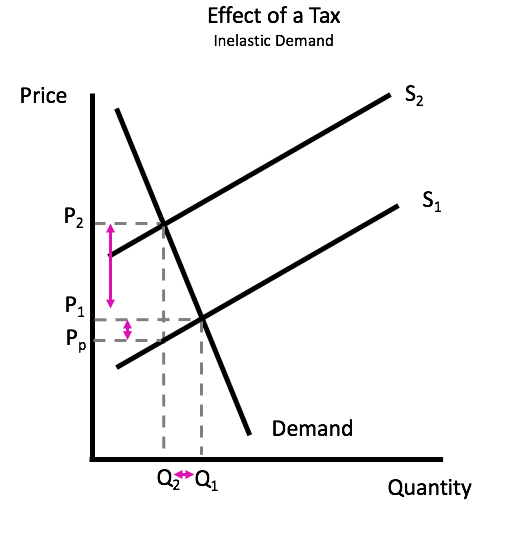 With the tax, supply shifts up and to the left.

Producers can raise price to cover most of the tax without losing many sales, from P1 to P2.

Therefore, they don't lose much in sales, they are able to raise price up, and the difference between what they are receiving and what price used to be is not very much at all.

They are able to have the consumer absorb most of that tax increase.

Now, when demand is more elastic than supply, producers cannot raise price much without losing a lot in sales.

With elastic demand, consumers do change their buying habits as price goes up or down, so even though producers raise prices just a little bit, notice how much sales they lose. 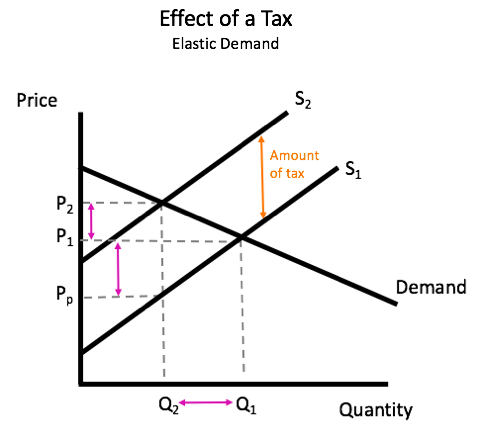 In this case, the producer will bear most of the burden because they cannot raise price much at all to offset the tax that they have to pay back to the government.

big idea
It is the elasticity of supply and demand that will show us who is bearing the burden of taxation.

Percentage taxes are taxes based on a certain percentage of the price of the good.

hint
The key question to ask yourself to determine whether a tax is progressive or regressive is, "Who is impacted by the tax more?"

With progressive taxation, a higher income earner will be impacted more, because the tax increases as income increases.

It's not just the tax amount but the actual percentage that will increase as income increases.

For this reason, our federal income tax structure is the perfect example of progressive taxation.

Consider tax brackets, which you are likely familiar with. As you make more money, you might be placed in a higher tax bracket and your income is taxed at a higher rate.

For example, instead of 15% of your income going to the government, if you are placed into the next tax bracket, the next amount of income you earn may be taxed at 18%.

Therefore, as you make more money, not only are you paying more but you are paying a higher percentage of that amount of money.

In the U.S., this is the method of income redistribution, where the wealthier bear a greater burden in terms of our income tax structure than the lower income earners.

Regressive taxation is the opposite, referring to a flat tax that results in a higher percentage as a proportion of income being paid by lower income earners compared with higher income earners.

Even though sales taxes may not necessarily be intended to be regressive, they do end up being regressive, which can be quite confusing.

For instance, suppose the sales tax in your city is 7%. Everyone is paying the same percent, rich or poor.

However, even though everyone pays the same percentage, this impacts a low income earner more than someone who makes a lot of money, because lower income individuals end up spending a much higher percentage of their income on items subject to tax.

For this reason, some states do not tax certain items that are considered necessities, like food or clothing, to avoid being overly regressive.

Some people suggested that there are two purposes of sales taxes. One is certainly to collect revenue for the government.

However, in certain goods, it can be to discourage consumption of items such as cigarettes and alcohol--to compel people to purchase less of them by imposing a high tax on them.

A flat tax is an amount of tax applied to all levels of income without any exemptions or deductions.

Suppose there was a 1% tax on all income and you couldn't deduct or exempt any of your income from it. As you make more money, you pay a greater amount but it is proportional to how much you make.

The percentage stays exactly the same regardless of income, which is why it is known as a proportional or flat tax.

summary
Today we learned about the effect of taxes on the prices paid by consumers and producers, as well as the effect on quantity. We learned that depending on the elasticity, such as inelastic demand or elastic demand, either the consumer or the producer might bear the burden more than the other.

We also learned about different types of percentage taxes, including progressive taxation, which impacts higher income earners; regressive taxation, which has a greater impact on lower income earners; and flat taxes, which impact everybody the same, proportionally. Lastly, we learned about the effects of subsidies on the prices paid by consumers and producers, as well as the quantity.

Amount of tax applied to all levels of income without exemptions or deductions.

Tax based on a certain percentage of the price of the good.

Support offered by the government to a business or individual to incentivize production of a good or service.