Or
Close Popup
+
2 Tutorials that teach Tax/Subsidy
Take your pick:
Previous Next

Identify effects of tax and subsidies.

(more)
See More
Tutorial
what's covered
This tutorial will cover the effect of taxes and subsidies on both consumers and sellers.

1. Taxes and Impact on Market Outcome

It is common knowledge that we pay taxes on many things. We pay taxes on our income at three levels--local, state, and federal. We also pay a lot of taxes on goods and services.

In economics, we consider how taxes alter the market outcome. By analyzing a graph, we notice how the equilibrium quantity being purchased or being supplied is impacted, as well as how the price we pay is affected.

Here is a basic graph of a tax. Let's assume that it represents the effect of taxing cigarettes, which is a common example of a tax. In the case of a tax, since it is an increased cost to the producer, the supply curve shifts to the left, with two results: 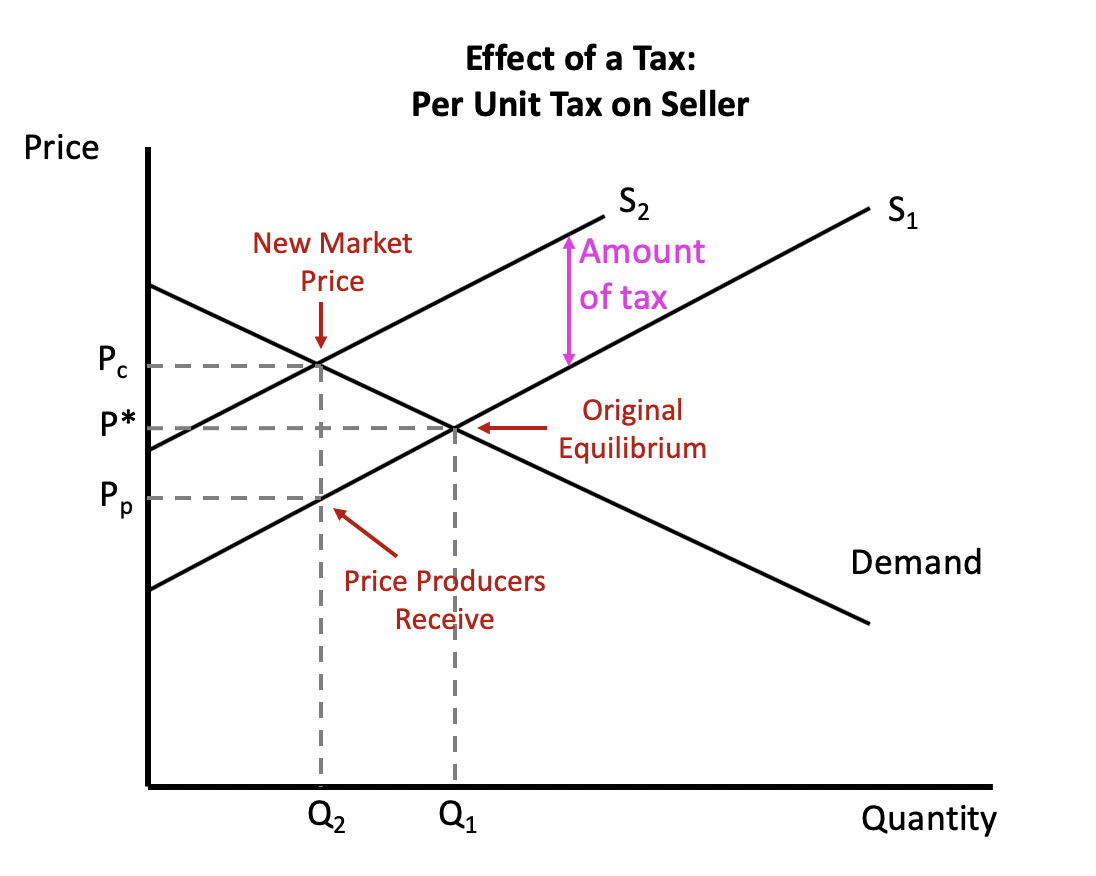 Looking at the graph above, the original equilibrium was at Q1 and P*.

With a decrease in supply comes movement along the demand curve, and the new market price being paid is Pc, as indicated on the graph.

However, the price that producers are actually going to receive is down at Pp, because the amount of the tax is the distance between the supply curves.

Now, the next question is, who is actually impacted in this scenario? What is the tax incidence, which is the economic "burden" of tax? Is it the consumer or the producer? Is it a combination?

Generally, it is going to be a combination, but let's examine who bears more of the burden.

It certainly depends on the good or service, and it involves the concept of elasticity, which is the measurement of change in quantity demanded or supplied, showing the sensitivity of one variable to characteristics of another variable. In other words, how responsive is something to something else?

The economic "burden" of a tax


Here is an inelastic demand curve. Notice how it is fairly straight up and down--or very inelastic--meaning that consumers are not overly responsive to a price change. 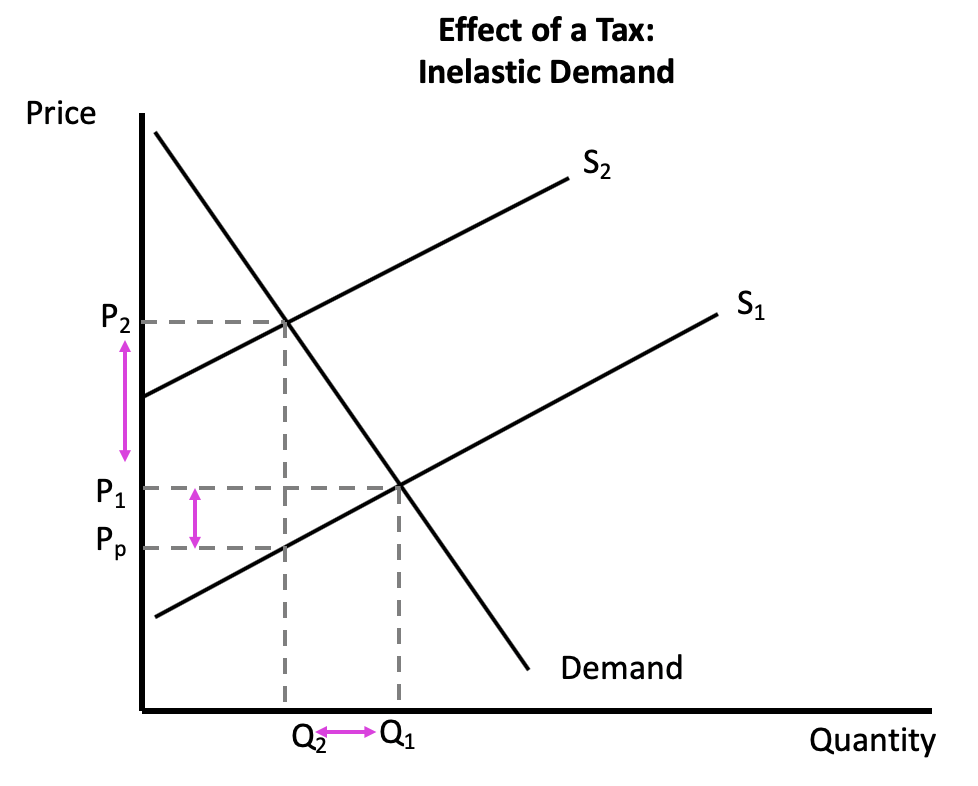 So, as we shift supply to the left to account for the amount of the tax, several things happen:

hint
Remember, the distance between the supply curves is the tax.


Similarly, if we look at a situation when supply is elastic supply, it will have a very similar outcome as above. 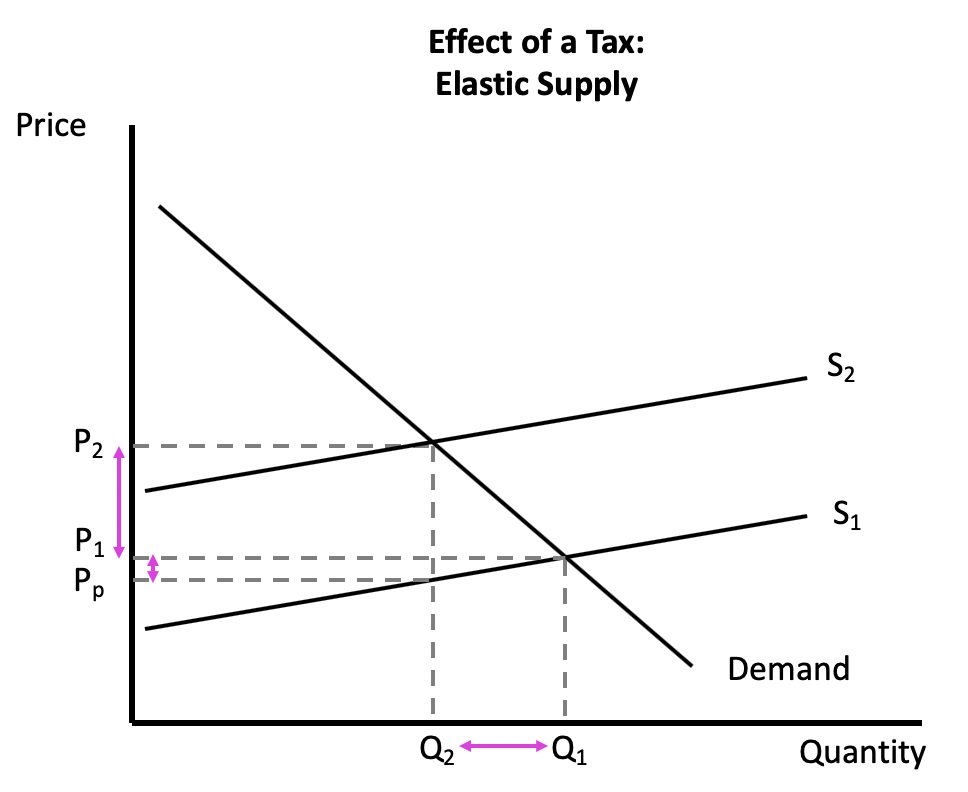 
An opposite situation occurs when we have a very elastic demand compared to supply. 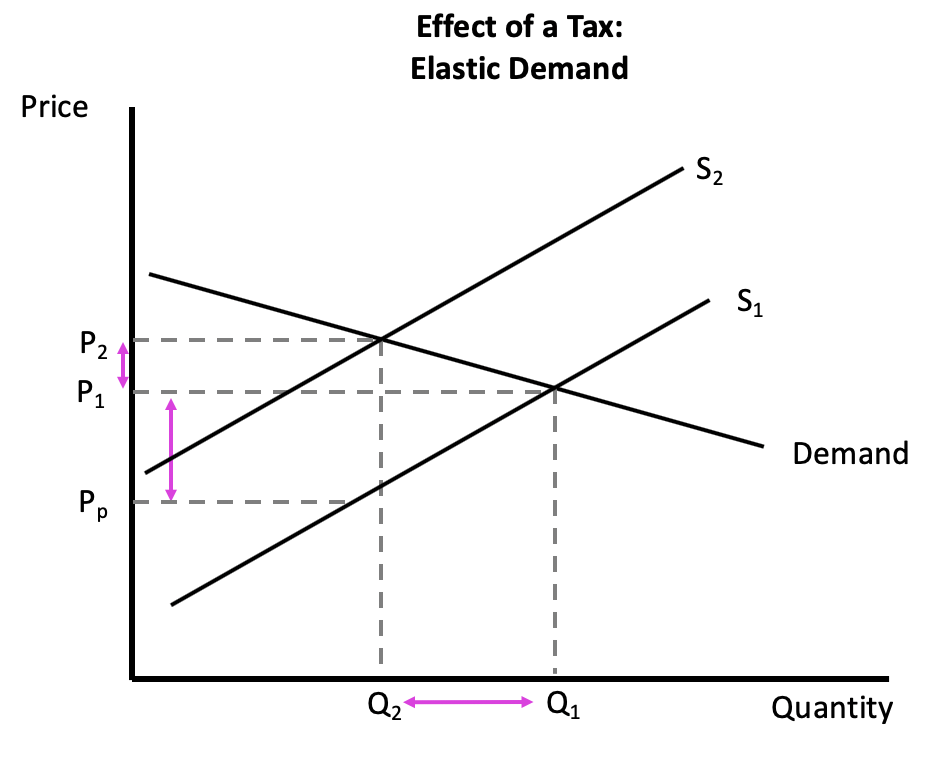 Even with that small increase in price, notice the change in quantity. This is because we, as consumers, are very responsive to the price change with elastic demand.


The last scenario to discuss is one of inelastic supply. Again, this will have a very similar outcome as with the elastic demand. 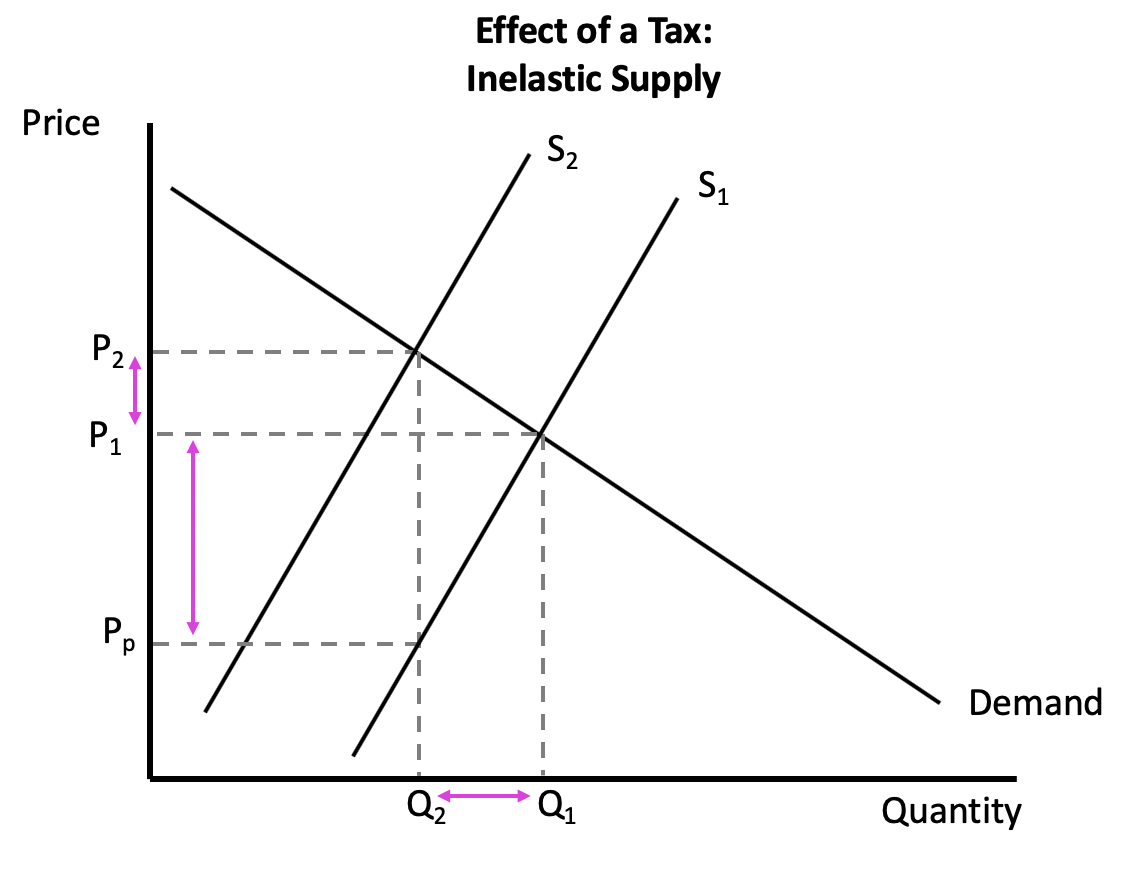 When they raise the tax initially, it can generate a significant response in terms of consumers cutting back on buying cigarettes. Perhaps this reflects the people who were on the border, such as those who wanted to quit anyway or those casual smokers, who might cut back now that they have to pay a tax.

They are addicted to cigarettes and will continue smoking, regardless of price. Therefore, the impact of the tax can be quite different as it gets higher and higher, because of the inherent characteristics of particular items.

3. Subsidies and Impact on Market Outcome

A subsidy is a sum paid, typically by the government, to either suppliers or consumers to assist in the production or purchase of a good or service. The point of a subsidy is to get supply increased.

hint
In essence, we are simply reversing the process. You will notice that whenever there is a subsidy, supply will be clearly increasing, versus decreasing as with a tax.

The effect of a subsidy is that the supply curve shifts to the right, as shown below. The initial price and quantity (P*, Q1) shift to its new point of equilibrium at (Pc, Q2). 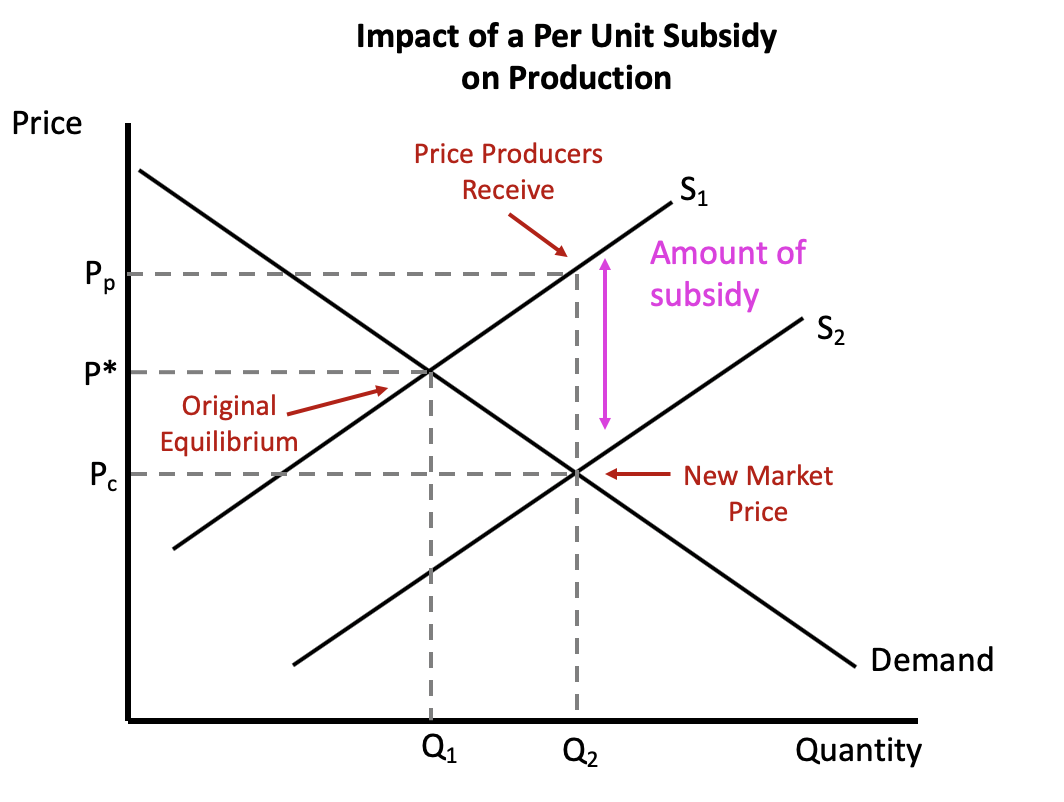 The price that consumers are paying is now lower (Pc), while the price that producers are receiving--because the amount of the subsidy is the distance between the two supply curves--is higher, at Pp.

hint
Keep in mind, that to fund this subsidy, tax revenue will need to be used from some other source.

Now, let's go through the same exercise as before, although in this case, it is slightly different because the question is not about who is bearing the burden, but rather who collects the subsidies. 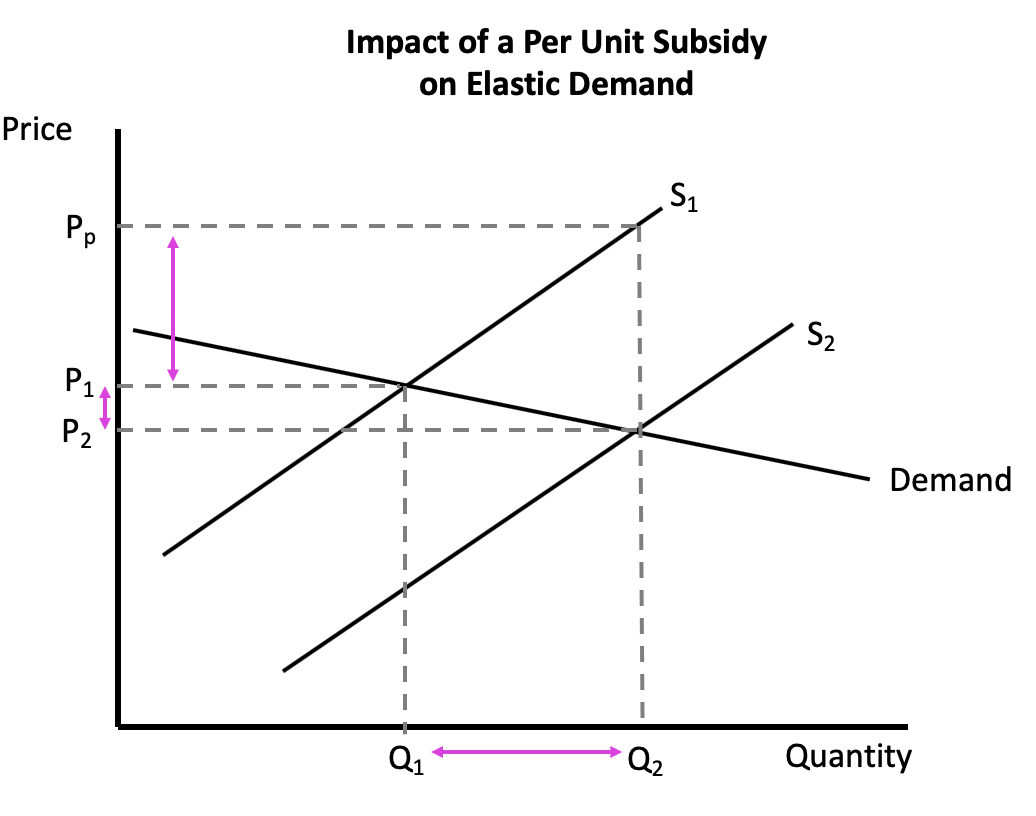 
With inelastic demand, consumers will receive more of it, which is the opposite of what happens with a tax. In the graph, notice the significant portion that consumers are receiving, compared to the small portion that represents how much the producers would receive. 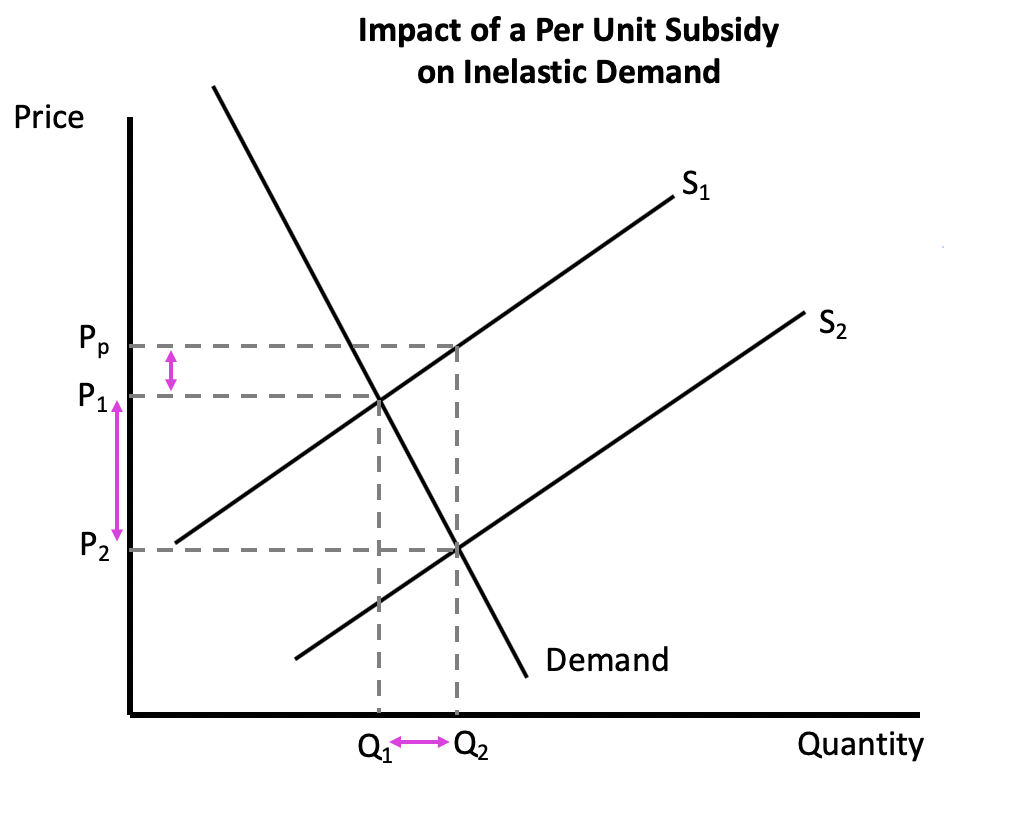 summary
Today we learned about the impact of taxes and subsidies on the market outcome or the prices paid by consumers and producers. We discussed who might bear the majority of the burden, or "pay" the incidence, depending on the elasticity of the supply and demand, by exploring each of the scenarios: inelastic demand and supply, and elastic supply and demand.

Measurement of change in quantity demanded (supplied) which indicates the sensitivity of one variable to characteristics of another variable or income.

Sum paid (typically by a government entity) to either suppliers or consumers to assist in the production or purchase of a good or service.

An additional cost of supply or purchase levied to alter consumer behavior and/or increase government revenue.

The economic "burden" of a tax.