The American Revolution in a Global Context

Recognize the Enlightenment ideas of Natural Equality and Social Contract Theory as they are presented in documents associated with the American, French, and Haitian revolutions.

(more)
See More
Tutorial
what's covered
Despite the well-known assertions regarding universal rights to liberty and equality in the Declaration of Independence, most American revolutionaries were primarily concerned with winning their war against Great Britain. Nevertheless, historians have examined the Revolution — especially the Enlightenment ideals espoused in the Declaration — within a transatlantic context. Not only has the Declaration’s insistence upon “certain unalienable rights” inspired generations of Americans, it has also motivated marginalized and colonized people around the world, from the 18th century through today.

This tutorial examines the American Revolution in a global context, in three parts:

1. Equality and Slavery in the Atlantic World

Revolutionaries in the Atlantic region — including Americans — believed in Enlightenment ideals associated with the social contract.

A theory of government, espoused by John Locke, in which the purpose of government is to protect the life, liberty, and property of individuals.

Enlightenment thinkers believed in natural equality: the idea that all people were born free and equal. They further believed that all people had the right to acquire property and develop it as they saw fit. The purpose of government was to protect an individual’s rights, including those associated with property ownership. For these reasons, Enlightenment thinkers rejected the divine right of kings, which was part of the basis of many European monarchies.

Racial slavery in the Atlantic region complicated Enlightenment notions of equality. When Locke and other philosophers discussed natural equality and liberty, they failed to consider the rights of people of color. In asserting that individuals have a right, based on natural equality, to acquire property, they included the acquisition of slaves — the most valuable form of property in the Atlantic region. To justify the existence and practice of slavery, white Europeans and Americans relied on racist arguments: Africans and their descendants are physically and intellectually inferior to white people and, therefore, unfit for freedom.

The U.S. Declaration of Independence relied on social contract theory to justify separation from Great Britain, as indicated in the Preamble:

The U.S. Declaration of Independence

“When in the Course of human events, it becomes necessary for one people to dissolve the political bands which have connected them with another, and to assume among the powers of the earth, the separate and equal station to which the Laws of Nature and of Nature's God entitle them, a decent respect to the opinions of mankind requires that they should declare the causes which impel them to the separation.”

think about it
What evidence of social contract theory do you see in the Preamble of the U.S. Declaration of Independence?

13 years after the U.S. Declaration of Independence, French revolutionaries initiated a rebellion against the absolute monarchy of King Louis XVI. Like the Americans, they used social contract theory to justify their opposition to the monarchy, most notably in the Declaration of the Rights of Man and Citizen, first issued in August of 1789.

The French Declaration of the Rights of Man and Citizen

“The representatives of the French people, constituted as a National Assembly, and considering that ignorance, neglect, or contempt of the rights of man are the sole causes of public misfortunes and governmental corruption, have resolved to set forth in a solemn declaration the natural, inalienable and sacred rights of man: so that by being constantly present to all the members of the social body this declaration may always remind them of their rights and duties; so that by being liable at every moment to comparison with the aim of any and all political institutions the acts of the legislative and executive powers may be the more fully respected; and so that by being founded henceforward on simple and incontestable principles the demands of the citizens may always tend toward maintaining the constitution and the general welfare.”

did you know
The Declaration of the Rights of Man and Citizen was introduced to the French Assembly by the Marquis de Lafayette, who had returned to France after helping the United States achieve independence.

The chaos associated with the French Revolution contributed to other revolutionary movements in France's Atlantic empire, most notably in the colony of Saint-Domingue (modern-day Haiti). In 1791, thousands of black slaves overthrew the brutal system of slavery on the island. They took control of a large section of Saint-Domingue, burning sugar plantations and killing white planters.

In 1794, Spain and England attacked Saint-Domingue in attempts to add it to their own empires. Toussaint L’Ouverture, a self-educated former domestic slave, transformed the rebellious slaves into a disciplined army and led them to repulse the British and Spanish, as well as a French attempt to retake the island. 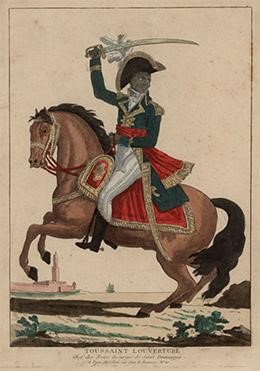 In November 1803, after more than a decade of war with European colonial powers, the black revolutionaries declared Haiti's independence. Their declaration used language quite different from that of the American or French documents. The following passage is taken from the beginning of the declaration:

“In the Name of the Black People, and Men of Color of St. Domingo [Haiti]:

THE Independence of St. Domingo is proclaimed. Restored to our primitive dignity, we have asserted our rights; we swear never to yield them to any power on earth; the frightful veil of prejudice is torn to pieces, be it so for ever. Woe be to them who would dare to put together its bloody tatters.”

think about it
Why was the Haitian Declaration of Independence made “In the Name of Black People, and Men of Color”? Why does it proclaim a restoration “to our primitive dignity”?

In addition to Enlightenment ideals, the American, French, and Haitian Revolutions were influenced by socio-political contexts in the Atlantic region.

See if you can discern these contexts in the following selections from the declarations of each revolutionary movement. First, the U.S. Declaration of Independence:

The U.S. Declaration of Independence

“We hold these truths to be self-evident, that all men are created equal, that they are endowed by their Creator with certain unalienable Rights, that among these are Life, Liberty and the pursuit of Happiness.--That to secure these rights, Governments are instituted among Men, deriving their just powers from the consent of the governed, --That whenever any Form of Government becomes destructive of these ends, it is the Right of the People to alter or to abolish it, and to institute new Government, laying its foundation on such principles and organizing its powers in such form, as to them shall seem most likely to effect their Safety and Happiness.”

Compare the U.S. claim of rights to “Life, Liberty, and the pursuit of Happiness” with a selection of some of the “rights of man and citizen” from the French declaration:

The French Declaration of the Rights of Man and Citizen

“1. Men are born and remain free and equal in rights. Social distinctions may be based only on common utility.

2. The purpose of all political association is the preservation of the natural and imprescriptible rights of man. These rights are liberty, property, security, and resistance to oppression…

4. Liberty consists in the ability to do whatever does not harm another; hence the exercise of the natural rights of each man has no other limits than those which assure to other members of society the enjoyment of the same rights. These limits can only be determined by the law…

6. The law is the expression of the general will. All citizens have the right to take part, in person or by their representatives, in its formation. It must be the same for everyone whether it protects or penalizes. All citizens being equal in its eyes are equally admissible to all public dignities, offices, and employments, according to their ability, and with no other distinction than that of their virtues and talents.”

Finally, compare the previous selections with a passage from Haiti’s Declaration of Independence (1803):

“Oh! Landholders of St. Domingo, wandering in foreign countries, by proclaiming our independence, we do not forbid you, indiscriminately, from returning to your property; far be from us this unjust idea. We are not ignorant that there are some among you that have renounced their former errors, abjured the injustice of their exorbitant pretensions, and acknowledged the lawfulness of the cause for which we have been spilling our blood these twelve years….But as for those, who, intoxicated with foolish pride, interested slaves of a guilty pretension, are blinded so much as to believe themselves the essence of human nature, and assert that they are destined by heaven to be our masters and our tyrants, let them never come near the land of St. Domingo: if they come hither, they will only meet with chains or deportation; then let them stay where they are; tormented by their well-deserved misery, and the frowns of the just men whom they have too long mocked, let them still continue to move, unpitied and unnoticed by all.”

think about it
Who are the “Landholders of St. Domingo” to which the Haitian Declaration refers? Why might this distinction be significant?

brainstorm
Of the three revolutions discussed in this tutorial — American, French, and Haitian — which do you think was the most radical and why?

summary
The American Revolution was not the only revolution that impacted the Atlantic region. In France, revolutionaries applied many of the same ideals that Thomas Jefferson described in the U.S. Declaration of Independence to justify their opposition to an autocratic monarch. The French Revolution, based on the “sacred rights of man”, had significant consequences: Haitian slaves used similar principles to justify their rebellion against French colonial order, and their creation of a nation “In the Name of the Black People, and Men of Color” in the Caribbean.

A theory of government espoused by John Locke, in which the purpose of government was to protect the life, liberty, and property of the individual

A former slave on the island of Saint Domingue (Haiti) who emerged as a leader of the Haitian Revolution.

The Declaration of Independence justifies American independence from Great Britain.

The French Declaration of the Rights of Man and Citizen is a human civil rights document from the French Revolution.

The Haitian Declaration of Independence marks the end of the 13-year long Haitian Revolution.