Or
Close Popup
+
2 Tutorials that teach The Apology — Socrates' Arguments
Take your pick:
Previous Next

Extract an argument from a text.

Tutorial
what's covered
This tutorial provides a review of the key points of The Apology, and demonstrates how to extract arguments from it.

This review and consideration of the arguments in the Apology is provided in two parts:

1. Review of The Apology

Recall that The Apology is a transcript (recorded by Plato) of Socrates' trial. In it, Socrates presents his defense. He had been charged with denying the gods and, more seriously, corrupting the youth of Athens.

As Socrates indicates, the real charges against him were unpopularity and making powerful enemies. Since it was his practice of philosophy that led to the charges, he needed to prove that his search for truth, and his attempts to lead others to it, were good and worthwhile occupations. He had to prove that he did not corrupt the youth and to let his accusers know that he did not fear death.

The Apology begins after the prosecution has presented its case. Socrates began his defense by making a distinction between the “old charges” and the “new charges.” By “new charges,” he meant the official charges: denying the gods and corrupting the youth of Athens. The “old charges” were, collectively, his reputation.

2. Extracting Arguments from The Apology

In addressing the “new charges,” particularly the charge that he had corrupted the youth of Athens, Socrates (using his dialectic method), argued with the chief prosecutor, Meletus. In their exchange, Socrates makes two arguments: one inductive, one deductive.

An argument in which the inferential claim is of logical certainty

Review the following text and see if you can reconstruct Socrates' arguments before evaluating them.

In the first (inductive) argument, Socrates led Meletus to state his claim precisely:

Socrates: Then every Athenian improves and elevates them; all with the exception of myself; and I alone am their corrupter? Is that what you affirm?
Meletus: That is what I stoutly affirm.

This passage indicates the direction Socrates’ argument would take. Meletus’s assertion was that everyone else improved the youth; only Socrates corrupted them. Socrates next showed that this assertion was bizarre:

But suppose I ask you a question: How about horses? Does one man do them harm and all the world good? Is not the exact opposite the truth? One man is able to do them good, or at least not many — the trainer of horses, that is to say, does them good, and others who have to do with them rather injure them?...Happy indeed would be the condition of youth if they had one corrupter only, and all the rest of the world were their improvers. But you, Meletus, have sufficiently shown that you never had a thought about the young: your carelessness is seen in your not caring about the very things which you bring against me.

Extraction of premises and a conclusion from the preceding text produces the following:


3. It is easier to raise a good human than a good horse (a ridiculous conclusion). 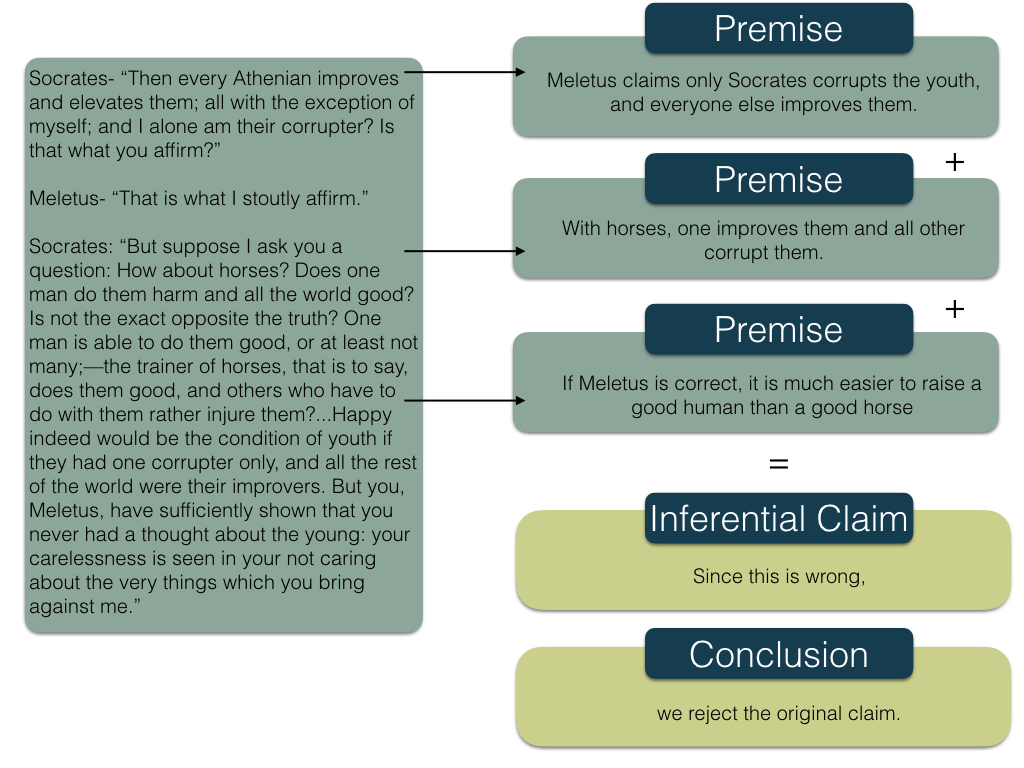 The statement that it is much easier to raise a good human than a good horse is clearly false. As a result, we must reject Meletus’ original assertion.

Socrates' argument is inductive because it is based on cause-and-effect relationships. The conclusion resulting from Meletus' premise is logically sound. Absurd conclusions are improbable; they should not be believed unless overwhelming evidence compels us to do so. No youth (or their parents) accused Socrates. Therefore, there is no evidence to support the absurd conclusion (much less "overwhelming" evidence). We must reject the premise which led to it.

Socrates next made a deductive argument:

Socrates: And when you accuse me of corrupting and deteriorating the youth, do you allege that I corrupt them intentionally or unintentionally?
Meletus: Intentionally, I say.
Socrates: But you have just admitted that the good do their neighbours good, and the evil do them evil. Now, is that a truth which your superior wisdom has recognized thus early in life, and am I, at my age, in such darkness and ignorance as not to know that if a man with whom I have to live is corrupted by me, I am very likely to be harmed by him; and yet I corrupt him, and intentionally, too….But either I do not corrupt them, or I corrupt them unintentionally; and on either view of the case you lie. If my offense is unintentional, the law has no cognizance of unintentional offenses: you ought to have taken me privately, and warned and admonished me.

Look for Socrates' main point in this passage: Corruption of the youth is either intentional or unintentional. Socrates must show why either of those options leads to a not guilty verdict.

try it
See if you can reconstruct the argument, starting with the premise:

Corruption is either intentional or unintentional.

The argument may be reconstructed as follows: 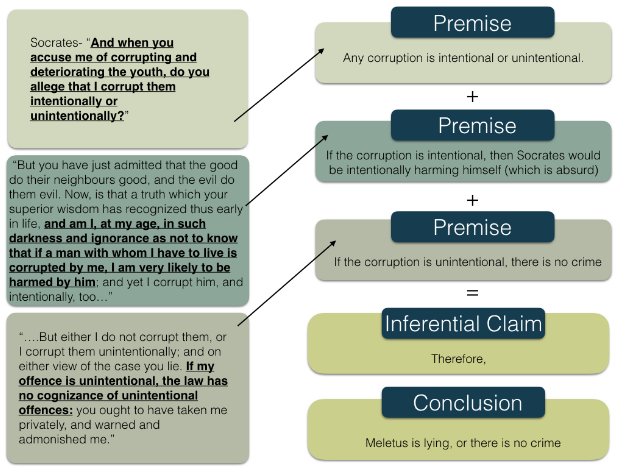 This leads to a not guilty verdict either way. Note that these three premises deductively entail this conclusion and Meletus has granted all three of them. This means that he has also granted the conclusion. Unfortunately for Socrates, the jury did not agree.

The jury was not persuaded by Socrates’ arguments and found him guilty. Meletus asked for a penalty of death; Socrates did not suggest a viable alternative. As a result, he was sentenced to death.

Before and after his sentence was pronounced, Socrates presented the reasons why he did not fear death. Most importantly, he had done what he thought was right: he had pursued wisdom and taught others to do so, and he had lived according to the principles of his moral philosophy.

Socrates stated, “The difficulty, my friends, is not to avoid death, but to avoid unrighteousness; for that runs faster than death.” He indicated that good people do what they know is right, regardless of negative personal consequences. Even the risk of execution should not influence what good people ought to do.

Socrates maintained that all people are obligated to perform the “godly” pursuit of philosophy, of seeking wisdom and practicing right living. These activities are peculiar to humans. Without them, we fall short of our humanity. As Socrates famously stated, “the unexamined life is not worth living.”

As a final statement indicating his determination to do what he knows is right, Socrates made another deductive, either-or argument about why we should not fear death.

[T]here is great reason to hope that death is a good; for one of two things — either death is a state of nothingness and utter unconsciousness, or, as men say, there is a change and migration of the soul from this world to another. Now if you suppose that there is no consciousness, but a sleep like the sleep of him who is undisturbed even by dreams, death will be an unspeakable gain….Now if death be of such a nature, I say that to die is gain; for eternity is then only a single night. But if death is the journey to another place, and there, as men say, all the dead abide, what good, O my friends and judges, can be greater than this? If indeed when the pilgrim arrives in the world below, he is delivered from the professors of justice in this world, and finds the true judges who are said to give judgment there….What would not a man give if he might converse with Orpheus and Musaeus and Hesiod and Homer?...Above all, I shall then be able to continue my search into true and false knowledge….What would not a man give, O judges, to be able to examine the leader of the great Trojan expedition; or Odysseus or Sisyphus, or numberless others, men and women too! What infinite delight would there be in conversing with them and asking them questions!

Like his deductive argument as to why he did not corrupt the youth, this argument is presented in an either-or format.

try it
Reconstruct Socrates’ argument from the text.

hint
Its structure is very similar to the either-or argument that Socrates made to show that was not guilty of corrupting the youth. Find the either-or statement, and show why neither option should be feared.

The argument can be reconstructed as follows: 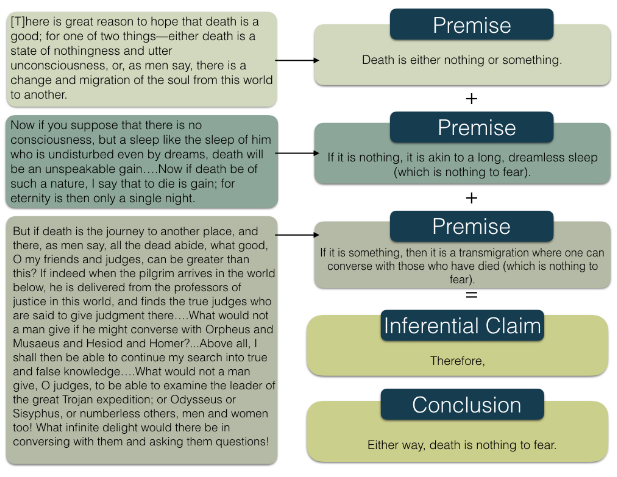 In maintaining the third premise, Socrates ignored the possibility of a negative afterlife (e.g., hell). However, concepts of eternal damnation were not hypothesized until centuries later. Additionally (and more importantly), Socrates described an afterworld ruled by true judges, who would not fault or punish him for dedicating his life to pursuing wisdom and moral philosophy. If we believed Socrates when he told us that we should pursue wisdom, this third premise is appropriate.

summary
In the Apology, Socrates defended himself against the charges directed at him and, in so doing, defended philosophy. While pursuing truth that led to the discovery of Socratic Wisdom, he made himself unpopular and enabled the sophists to condemn him. Although he refuted the charge of corrupting the youth with two strong arguments, Socrates was sentenced to death. The sentence did not upset him, because he knew he had lived rightly.
Attributions
Terms to Know

An argument whose inferential claim is a claim of logical certainty