Or
Close Popup
+
2 Tutorials that teach The Brain and Limbic System
Take your pick:
Previous Next

The Brain and Limbic System

Identify functions of structures in the brain, including the parts of the limbic system and the hindbrain.

(more)
See More
Tutorial
what's covered
This tutorial will focus on the brain as the central part of the nervous system. The brain is likely most recognizable by an outer layer of wrinkled material called the cerebral cortex, which is also called the forebrain. This is an area that developed much later on in the history of humans, in terms of evolution. The more basic and earlier parts of brain development, however, occurred in the hindbrain, will be the focus of this tutorial. You will also consider how being able to adapt and change based on your environment can strengthen your problem-solving skill and make you attractive to employers. We will do this by focusing on:

The brain is responsible for everything that makes up a person's thoughts, feelings, perceptions, language, and behaviors. It allows for the full range of the human experience.

Through various types of studies, psychologists have determined that certain areas and structures of the brain relate to certain behaviors or mental processes. This is what is called localization of functions, meaning that specific areas lead to certain functions. This is common in most people.

However, the brain is so complex that ongoing research is necessary. For instance, one area of the brain is aligned to vision, but the one specific neuron that leads to that one function of vision is unknown. That level of complexity is too difficult to fully understand at this time, but much progress has been made.

The idea that specific areas and structures of the brain relate to certain behaviors or mental processes.

did you know
The brain is constantly growing and developing and making new connections within the neurons throughout our entire lifespan time, and especially when we're younger.

Though employers don’t include things like “Must have great neuroplasticity” in their job descriptions, it is something they’re looking for, especially when it comes to problem solving. When you are faced with problems at work, your brain changes and builds new pathways as you seek solutions.

Suppose a stroke victim has damage to a specific area of the brain. Because of the localization of function, there are impairments with movement and speech.

However, because of neuroplasticity and the ability of the brain to adapt, this individual regains some of the functions over time. How is this possible?

The area surrounding the damaged parts of the brain began to take on some of those different functions because the brain has changed in order to adapt, and has learned to compensate for the damaged areas.

Some stroke victims may not completely regain all of their function, but they might regain some of it over time.

People who have lost speech have been examined and found to have a certain area of the brain that was damaged. This was later determined to be called the Broca's area, which is related to the production of speech itself.

Phineas Gage is a famous psychological subject, who had a tamping rod shot through the frontal lobe of his brain and survived. 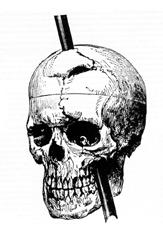 There was damage to a specific part of his brain and it severely affected his mood and personality. He essentially became a different person. Localization of function was studied, and psychologists began to understand that part of the brain is related to personality and mood.

The internal structures in the forebrain comprise what is called the limbic system, which is an area of the brain involved in aspects such as emotions, motivation, and memory formation. This area acts as an intermediary system to the cerebral cortex, as it passes on a lot of the information and processes it in different ways.

4a. Thalamus and Hypothalamus

The thalamus is located at the center of the brain. It is a type of conduit or switching center for all the sensory information that is being sent up to the cerebral cortex.

Injury to the thalamus can lead to a loss of senses in general, like deafness or blindness. The thalamus is also related to control of movement and sleep as well.

The hypothalamus regulates the autonomic nervous system and controls all of those regular bodily functions that keep us alive. Those things that we don't necessarily consciously deal with, like heartbeat and digestion, are regulated by the hypothalamus. 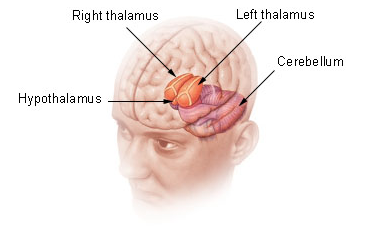 Areas of the forebrain involved in emotions, motivation, and memory formation.

A small, football-shaped structure central to brain; acts as conduction and switching center for sensory information being sent to the cerebral cortex.

A smaller, circular center in front of the thalamus, involved in motivation and emotions in people.

The amygdala is a small structure down towards the bottom of the brain. Remember, the brain has two different hemispheres, so there are two of these located inside of the brain. The amygdala is related to emotional responses within people, especially those emotions that have to do with survival--the fight or flight response--where it motivates us to survive in some way. Other emotional responses affected by the amygdala would include fear, anger, or pleasure-seeking emotions. 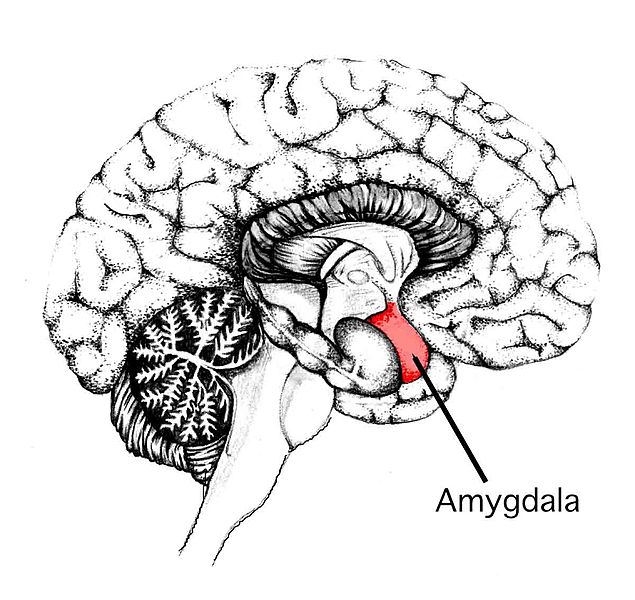 The amygdala can lead to the creation of a lot of irrational fears or phobias. If you have any phobia, you likely know that these kinds of things are very difficult to shake. It's hard to get rid of a phobia. Therefore, you can see how intrinsic and powerful this organ can be to the formation of different kinds of thoughts and ideas.

The hippocampus appears on both sides of the brain. It is related to the formation of memories. 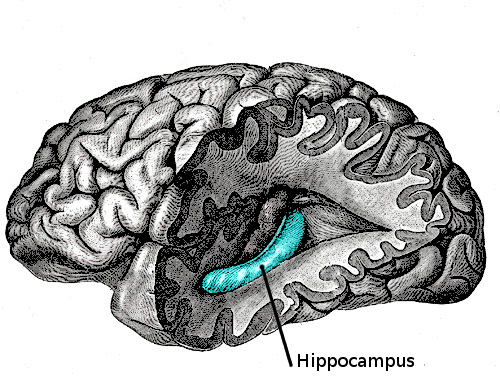 Now, remember that as with all parts of the brain, the parts of the limbic system also work together in many ways. The thalamus and the hypothalamus help to bring all of that sensory information to the higher levels of the brain. The amygdala attaches emotions and helps to create those quick-thinking types of responses. In addition, they all act as conduits to relay that information up to the cerebral cortex.

Similarly, with all of those parts working in conjunction, the hippocampus takes all the sensory information and the emotions that these three other organs are processing, and then attaches it to different kinds of events and helps to create strong long-lasting memories in our minds. This is why a lot of sensory information can trigger memories in people.

For instance, the smell of smoke can automatically trigger a memory of camping trips when you were a child.

This explains why memories have very strong emotions attached to them. If you remember, for example, a traumatic event from your childhood, you can still feel those same kinds of emotions because the hippocampus plays that central role in attaching those memories and creating meaning out of them, so that they can last longer within the brain.

Crescent-shaped structures on both sides of the brain, related to the formation of memories.

5. Overview of the Hindbrain

The earlier, more basic parts of brain development occurred in the hindbrain. These are the structures of the brain that are at the center or core of the brain and are connected to the spinal cord that goes out to the rest of the body.

This is also an area known as the brainstem, which includes the midbrain as well as the hindbrain. 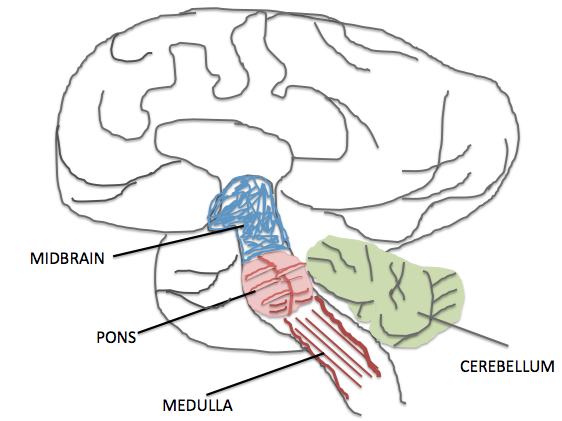 Structures of the brain at the center or core of the brain, connected directly to the spinal cord; also referred to as the hindbrain (cerebellum, pons, medulla oblongata).

The first section of the brainstem is the medulla, or the full name, medulla oblongata. It is connected directly to the spinal cord.

The medulla oblongata is related to involuntary body processes--those functions that are important in keeping us alive. The medulla regulates functions like breathing, heart rate, digestion, and swallowing. You may think of them as reflexes, but they are not; a lot of reflexes are controlled by the spinal cord itself.

did you know
The medulla even regulates sneezing!

The pons is located directly above the medulla and literally means "bridge" in Latin. You can see why, because the pons is related to transferring information from the hindbrain to the other areas of the brain.

The pons transfers information between the medulla and the brain, as well as the rest of the brain structures, particularly in relation to things like sleep and arousal. It's kind of a messenger that also helps to regulate those types of important bodily processes, and this works in conjunction with the reticular formation, covered in the next section.

5c. Reticular Formation and the RAS

The reticular formation (RF) is a little network of neurons, located inside the medulla and up to the pons. It is associated with attention and alertness. It's also related to functions like sleep and arousal, like the pons. The reticular activating system (RAS), activates other areas of the cerebral cortex, and is the system that keeps you awake or alert.

The RAS ensures that you are awake during certain periods of time, like when you're trying to study for a test late at night.

did you know
Do you ever wonder why children have such short attention spans? Well, it's because the reticular formation isn't fully developed until adolescence.

A network of neurons inside the medulla related to attention and alertness.

A system that heightens other areas of the cerebral cortex and keeps a person awake and alert.

The cerebellum is a cauliflower-looking structure located at the rear of the brain. It controls movements and helps to regulate coordination and balance. Again, this is a very important basic area of the brain. It keeps you upright and keeps you moving. It's also related to memories of skills and habits, meaning those kinds of things that involve motor movements and basic sorts of memory, that you don't necessarily have to think too hard about.

The structure at the back of the brain, behind the medulla and the pons, that helps to control movement and to regulate coordination and balance.

summary
Today we discussed an overview of the brain. The brain is responsible for everything that makes up a person's thoughts, feelings, perceptions, language, and behaviors. We learned about the different parts of the limbic system, including the thalamus, the hypothalamus, the amygdala and the hippocampus. We also got anoverview of the hindbrain and its structures, including themedulla oblongata , the pons and the cerebellum. You considered how your strong problem-solving skill is related to neuroplasticity and that employers appreciate that.

Structures of the brain at the center or core of the brain, connected directly to the spinal cord; also referred to as the hindbrain (cerebellum, pons, medulla oblongata).

The structure at the back of the brain, behind the medulla and the pons, that helps to control movement and to regulate coordination and balance.

Crescent-shaped structures on both sides of the brain, related to the formation of memories.

A smaller, circular center in front of the thalamus, involved in motivation and emotions in people.

Areas of the forebrain involved in emotions, motivation, and memory formation.

The idea that specific areas and structures of the brain relate to certain behaviors or mental processes.

A system that heightens other areas of the cerebral cortex and keeps a person awake and alert.

A network of neurons inside the medulla related to attention and alertness.

A small, football-shaped structure central to brain; acts as conduction and switching center for sensory information being sent to the cerebral cortex.