Differentiate between the various components of the Columbian Exchange.

Tutorial
what's covered
The combination of Portuguese colonization of Atlantic islands and Christopher Columbus’s landing in Hispaniola in the 1400s inaugurated an era of aggressive European expansion throughout the Atlantic. This age of exploration and the subsequent creation of a more interconnected world meant that previously isolated groups — Africans, Native Americans, and Europeans — increasingly came into contact with each other, sometimes with disastrous results.

This tutorial examines the effects of increased interaction between the Old and New World in two parts:

1. A New Era of Globalization

Today, many Americans take for granted the fact that they live in a “globalized,” or an increasingly interconnected, world and economy. Globalization is not a new phenomenon. It emerged when western Europeans discovered the riches of the East during the Crusades (1095–1291). Yet, when the Silk Road and other overland trade routes between Europe, the Middle East, and China became costlier and more dangerous to travel, Europeans searched for more efficient and inexpensive trade routes over water. Europeans had developed an appetite for spices, silk, porcelain, sugar, and other luxury items from the East, and the opening of Atlantic trade routes by the Portuguese and the Spanish provided an opportunity to satisfy these appetites. Thus, the processes of globalization accelerated with the winds and sails of ships in the Atlantic.

The ever-increasing interconnectedness of the world. 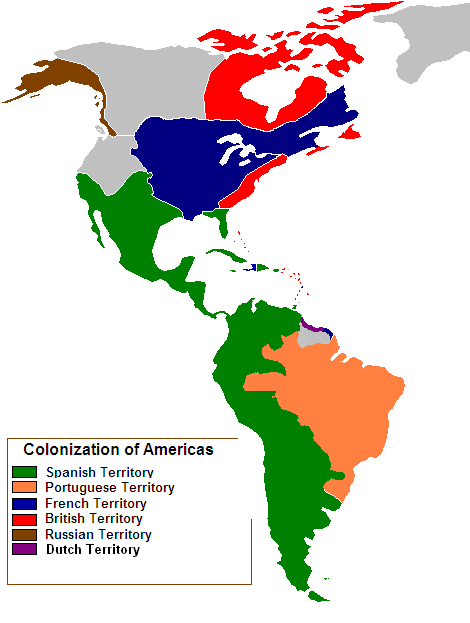 As oceanic trade routes to the East became increasingly dominated by the Portuguese (and later the Dutch), other European powers followed the Spanish example of colonizing the Americas. European promoters of colonization claimed the Americas overflowed with a wealth of treasures. Burnishing national glory and honor became entwined with carving out colonies, and no nation wanted to be left behind. This led to a general land-grab on part of the great European Empires. Following in the footsteps of the Portuguese and Spanish, the British, Danish, Dutch, French, and Russians set out to establish a foothold in the New World.

The governing control one nation has over another’s economy, labor, geography, politics, etc.

The consolidation of political power among several strong monarchies in Europe, the perceived need to spread the Christian faith throughout the world, and a desire for raw materials to sell in European markets were the driving factors behind European colonization. During the age of European exploration, nations used conquest, colonization, and trade to increase their share of the bounty of the New World.

Political, religious, and economic competition between European empires resulted in a process of colonization and exploitation in the Americas that required several factors:

During the 1500s and early 1600s, Europeans also introduced the process of commodification to the New World. American silver, tobacco, and other items, which were used by native people for ritual purposes, became European commodities that were assigned monetary values and bought and sold.

The transformation of something — for example, an item of ritual significance — into a commodity with monetary value.

Before the arrival of the Spanish, the Inca people of the Andes consumed chicha, a corn beer, for ritual purposes. When the Spanish discovered chicha, they bought and traded for it, turning it into a commodity. Commodification thus recast native economies, and spurred the growth of early commercial capitalism. New World resources, from plants to animal pelts, held the promise of wealth for European imperial powers.

As Europeans traversed the Atlantic, they brought with them plants, animals, and diseases that changed lives and landscapes on both sides of the ocean. These two-way exchanges between the Americas and Europe/Africa are known collectively as the Columbian Exchange. With European exploration and settlement of the New World, goods and diseases began crossing the Atlantic Ocean in both directions. This “Columbian Exchange” soon had global implications.

The movement of plants, animals, and diseases across the Atlantic due to European exploration of the Americas. 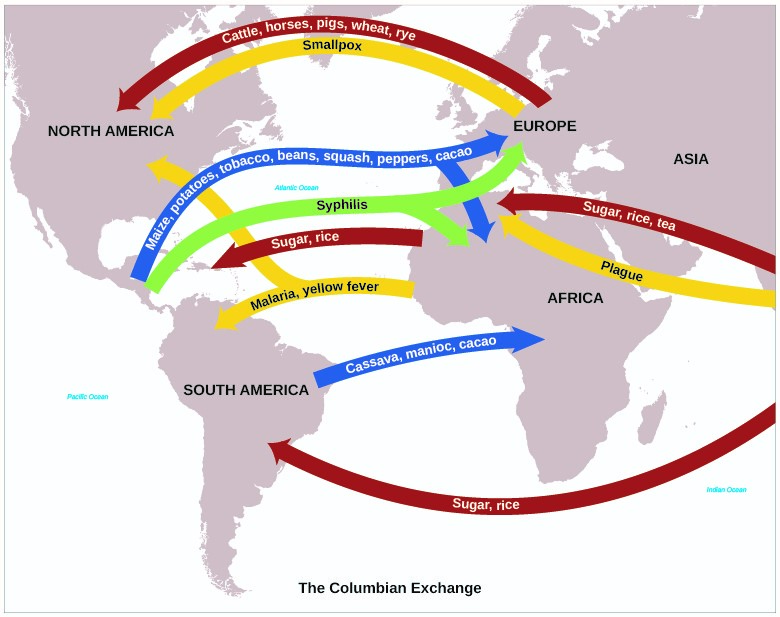 Of all the commodities in the Atlantic World, sugar proved to be the most important. Indeed, sugar carried the same economic importance as oil does today. European rivals raced to create sugar plantations in the Americas, and fought wars for control of some of the best sugar production areas. Although refined sugar was available in the Old World, Europe’s harsher climate made sugar cane difficult to grow, so it was not plentiful.

Columbus brought sugar to Hispaniola in 1493, and the new crop was growing there by the end of the 1490s. By the first decades of the 1500s, the Spanish were building sugar mills on the island. Over the next century of colonization, Caribbean islands and most other tropical areas became centers of sugar production.

Though of secondary importance to sugar, tobacco also achieved great value for Europeans as a cash crop. Native peoples had grown it for medicinal and ritual purposes for centuries before European contact, smoking it in pipes or powdering it to use as snuff. They believed tobacco improved concentration and enhanced wisdom. To some, its use meant achieving an entranced, altered, or divine state; entering a spiritual place.

Tobacco was unknown in Europe before 1492, and it carried a negative stigma at first. The early Spanish explorers considered natives’ use of tobacco to be proof of their savagery and, because of the fire and smoke produced in the consumption of tobacco, evidence of the Devil’s sway in the New World. Gradually, however, European colonists became accustomed to and even took up the habit of smoking tobacco. Like the Indians, Europeans ascribed medicinal properties to tobacco, claiming that it could cure headaches and skin irritations. Even so, Europeans did not import tobacco in great quantities until the 1590s. At that time, it became the first truly global commodity; English, French, Dutch, Spanish, and Portuguese colonists grew it for the world market.

Native people also introduced Europeans to chocolate, made from cacao seeds and used by the Aztecs in Mesoamerica as currency. Mesoamerican Indians consumed unsweetened chocolate in a drink with chili peppers, vanilla, and a spice called achiote. This chocolate drink — xocolatl — was part of ritual ceremonies, such as marriage, and an everyday item for those who could afford it.

did you know
Chocolate contains theobromine, a stimulant, which may be why native people believed it brought them closer to the sacred world.

Spaniards in the New World considered drinking chocolate a vile practice; one called chocolate “the Devil’s vomit.” In time, however, they introduced the beverage to Spain. At first, chocolate was available only in the Spanish court, where the elite mixed it with sugar and other spices. Later, as its availability spread, chocolate gained a reputation as a love potion.

The crossing of the Atlantic by plants such as cacao and tobacco illustrates the ways in which the discovery of the New World changed the habits and behaviors of Europeans. Plants once considered sacred or vital to native societies became valuable commodities in Atlantic trade. The consumption of these commodities in Europe contributed to the creation of new customs, such as smoking tobacco or drinking chocolate.

Europeans also changed the New World by bringing Old World animals to the Americas. On his second voyage, Christopher Columbus brought pigs, horses, cows, and chickens to the islands of the Caribbean. Later explorers followed suit by introducing similar animals or reintroducing ones that had previously been extinct in the Americas (such as horses). With less vulnerability to disease, these animals often fared better than humans in their new home, thriving both in the wild and in domestication.

Native cultures were unfamiliar with European livestock, and sometimes competed with domestic animals for resources. In some cases, Indians were forced to defend their crops from wandering, hungry livestock. In others, native societies incorporated European livestock with great success, with the most notable examples being Plains Indians and horses or the Navajos and sheep.

Travelers between the Americas, Africa, and Europe included microbes: silent, invisible life forms that had profound and devastating consequences. Native people had no immunity to diseases from across the Atlantic, to which they had never been exposed. European explorers unwittingly brought with them chickenpox, measles, mumps, smallpox, and many other diseases, all of which ravaged native peoples despite their attempts to treat the them. Native people had no experience with European bacteria and viruses, although there is evidence that they had experience with certain diseases, such as the common cold and syphilis. The outbreak of smallpox and other diseases in North America decimated native populations and wholly destroyed some native cultures. 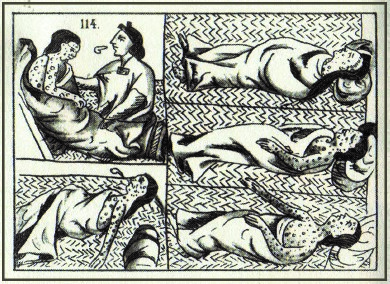 summary
In this tutorial, we discussed how European rulers and investors hoped to enrich their nations and themselves, and to gain the greatest share of what was believed to be a limited amount of wealth. New trade routes led to the emergence of more extensive globalization.

Native Americans who came into contact with Europeans found their worlds turned upside down as the new arrivals introduced their religions and ideas about property and goods. Europeans gained new foods, customs, plants, and animals in the Columbian Exchange, turning then into commodities to be bought and sold. Indians adapted to the introduction of certain plants and animals, while the introduction of diseases, such as smallpox, nearly destroyed them. The Columbian Exchange, like globalization in general, revealed that colonization could be both a beneficial and a disruptive process.

The governing control one nation has over another people’s economy, labor, geography, politics, etc.

The movement of plants, animals, and diseases across the Atlantic due to European exploration of the Americas.

The transformation of something—for example, an item of ritual significance—into a commodity with monetary value.

The ever-increasing interconnectedness of the world.

The Crusades lead to cultural exchanges between Europe and civilizations to the east.