Understand the circumstances and provisions of the Compromise of 1850.

(more)
See More
Tutorial
what's covered
The conclusion of the Mexican-American War and the presidential election of 1848 did not bring peace to the United States. Rather, the acquisition of western territory intensified the debate over slavery, contributed to the growing division between North and South, and led to the creation of new political coalitions such as the Free-Soil Party.

Amidst this political atmosphere, political compromises became nearly impossible. Antagonistic personal and sectional rivalries grew to be more important than the idea of a unified, democratic republic. As tensions mounted during the 1850s, national unity started to fray.

This tutorial examines the Compromise of 1850 and its consequences in four parts:

With the acquisition of new territories following the Mexican-American War, the national conversation over slavery and the West was complicated further when exciting news from California reached the eastern United States.

On January 24, 1848, James Marshall discovered gold in the American River near a sawmill owned by his partner, John Sutter. The news spread quickly. Within a week or two, nearly all of Sutter’s employees were scouring the area for gold. When the news reached San Francisco, many inhabitants left to seek their fortunes along the American River.

By 1849, thousands of people from around the world followed these first prospectors into the goldfields of California, igniting the Gold Rush. 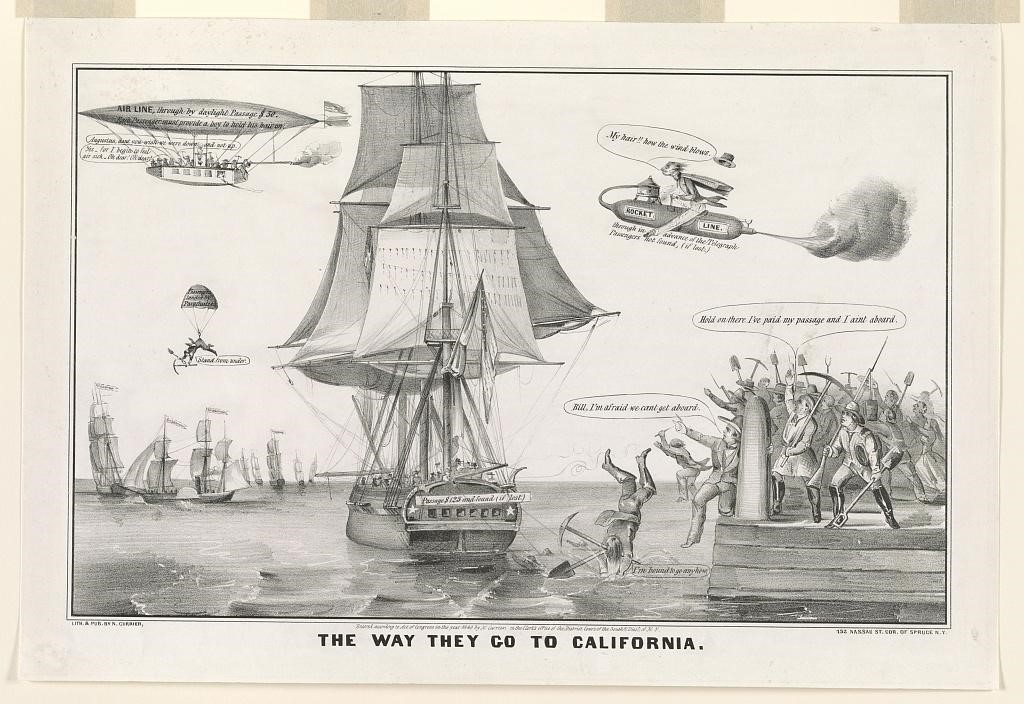 did you know
Approximately 200,000 people migrated to California by 1853. Mines in California produced over half a billion dollars in gold by 1858.

It wasn't long before the Gold Rush became entangled with the issue of slavery. Most of the miners in California opposed the introduction of black slaves to the region. They feared that if slaveholders migrated to California, bringing laborers who worked at no cost, opportunities for individual prospectors would disappear.

did you know
California miners used the same argument to oppose the introduction of Chinese laborers to the mines. Chinese miners had earned a reputation as hard workers who took over diggings that others had abandoned and worked them until every scrap of gold had been found. Many American miners resented and discriminated against them, believing that the Chinese deprived them of the opportunity to make a living.

While Congress waffled on the issue of slavery in California, white miners and settlers in the territory took matters into their own hands. In October of 1849, California ratified a state constitution that banned slavery. One month later, California requested entry into the Union as a free state.

Most northerners supported California’s request. Southerners, however, feared that California’s entry to the Union as a free state would tip the balance between northern and southern states in Congress in favor of the North. They expressed concern that exclusion of slavery from California might lead to the restriction of slavery in other parts of the territory acquired from Mexico.

Amidst the uproar over California’s request to join the Union as a free state, which included calls for secession from outraged white southerners, Congress sought a compromise. Henry Clay, the Senator from Kentucky (who had served in public office in one way or another since 1806, and who brokered the Missouri Compromise), offered a series of resolutions to address the issue of slavery and its potential expansion in the West.

think about it
Which provisions of Clay’s proposed compromise were designed to appease northerners? Which were included to appease southerners?

Clay presented his proposal as an omnibus bill: a measure that Congress would vote on as a package.

Clay did not seek to favor either faction with his compromise proposal. However, given the polarized nature of national politics at the time, Clay’s compromise was flawed in two important ways:

did you know
In this speech Webster famously declared that he spoke “not as a Massachusetts man, not as a Northern man, but as an American.” However, his call for national unity led many northern abolitionists to denounce him as a traitor.

did you know
Seward’s speech secured his reputation in the Senate as an advocate of abolition. 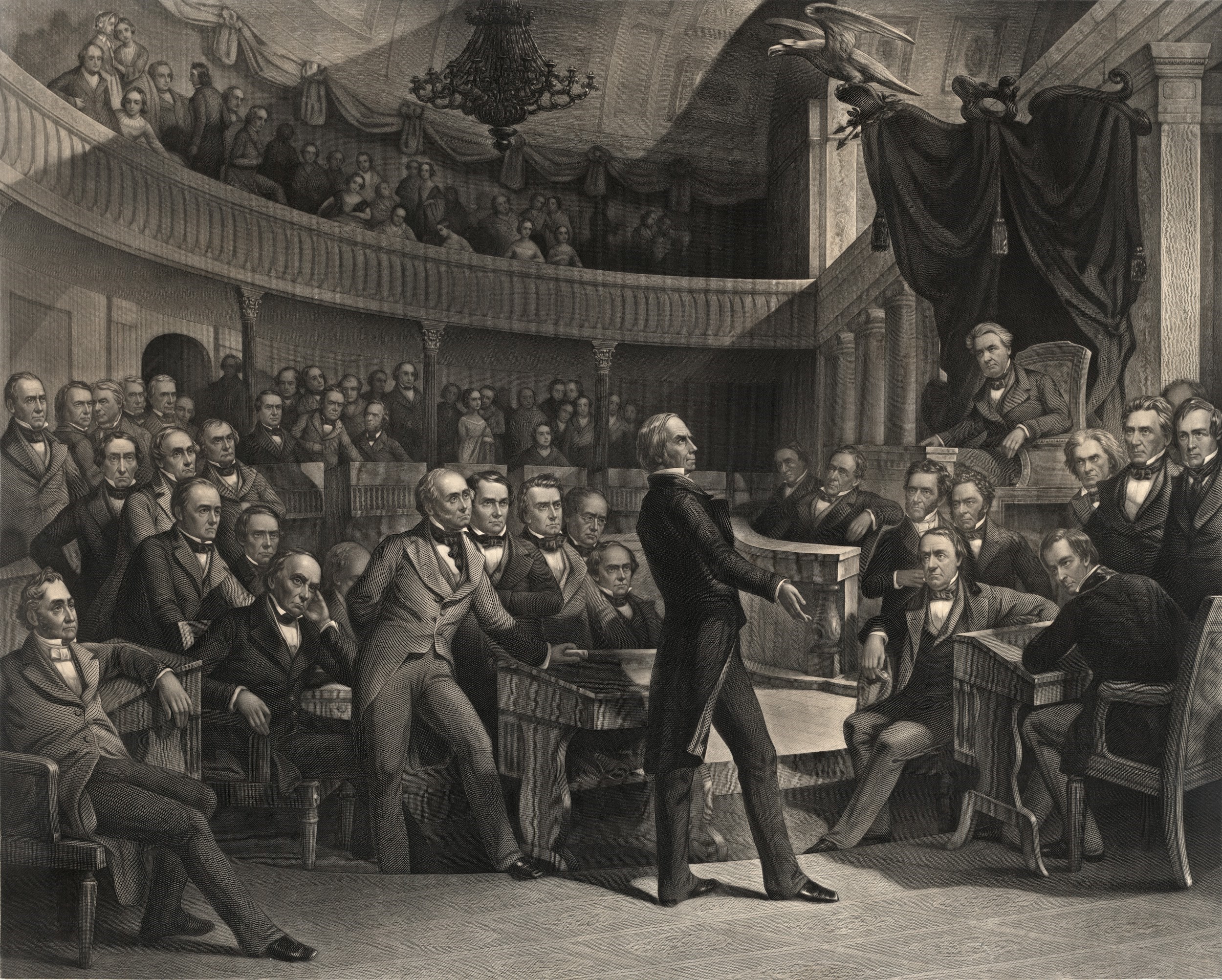 During the Senate debate, the executive branch failed to offer direction. President Zachary Taylor and Henry Clay did not like each other, and Taylor did not approve of the proposed compromise.

did you know
Although a slaveholder, Taylor believed that the climate in the lands of the Mexican Cession would prohibit plantation agriculture. As a result, he did not support the expansion of slavery to those territories.

did you know
Taylor fell ill after reportedly eating an excessive amount of fruit, followed by milk.

In July of 1850, Clay’s omnibus bill failed to pass the Senate. Frustrated and exhausted, he stepped down as the leader of the compromise effort. Following his departure, other senators attempted to find a solution. Their efforts were led by a young senator from Illinois, Stephen A. Douglas. 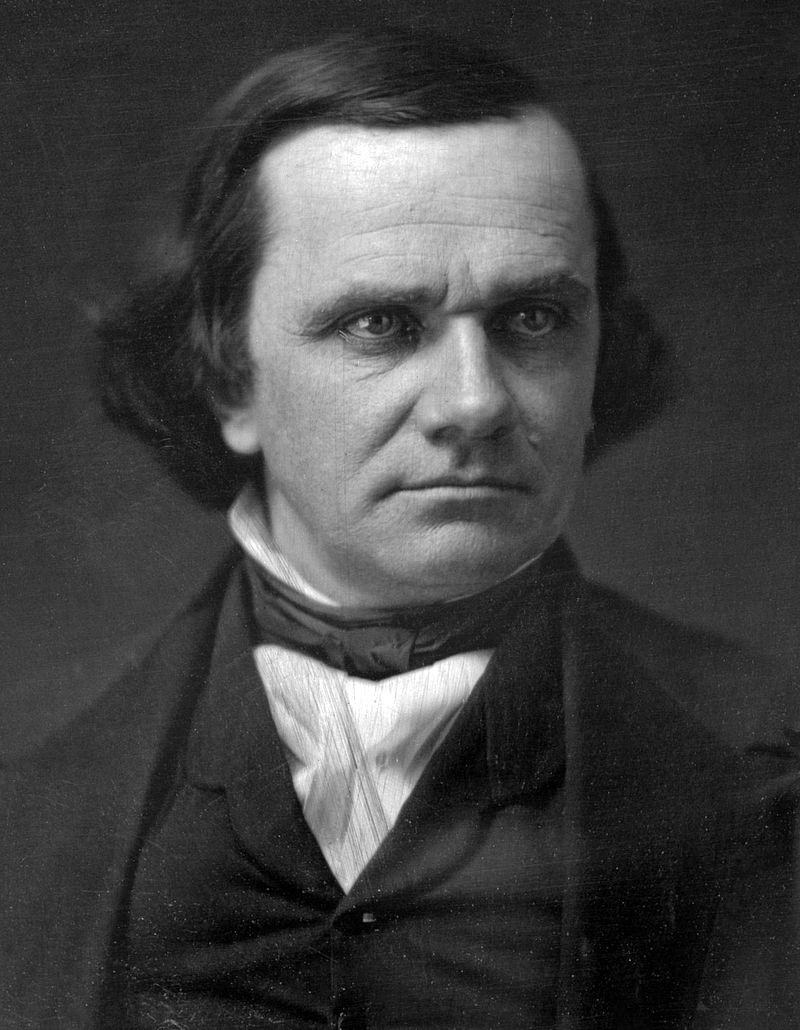 Douglas succeeded where Clay had failed by pushing a series of separate bills through Congress that were collectively known as the Compromise of 1850.

A series of five laws passed by Congress in 1850 to resolve sectional divisions that stemmed from the Mexican Cession and tensions over slavery.

The Compromise included the following: 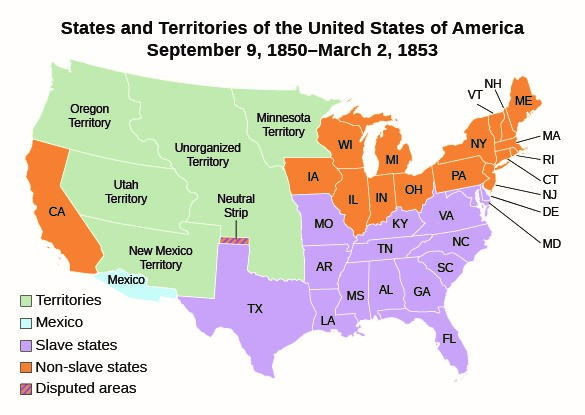 Votes for the compromise occurred largely along sectional, not partisan, lines.

A coalition of Whigs and Democrats from the northern states approved the admission of California as a free state, over the opposition of southern Democrats.

Most Americans breathed a sigh of relief over the Compromise of 1850.

big idea
Crowds in Washington, D.C., cheered “The Union is Saved” upon hearing of the compromise. However, it was enacted in large part because Douglas and other senators deliberately left the issue of slavery in the western territories — the primary issue — off the table, preferring to let settlers decide the issue through popular sovereignty. Evasion of this issue, and enactment of the controversial Fugitive Slave Act, would come back to haunt Douglas and other politicians.

Hope that the Compromise of 1850 would resolve the sectional crisis proved to be short-lived as the Fugitive Slave Act turned into a major source of conflict.

A component of the Compromise of 1850 that provided federal support to slave catchers who captured runaway slaves, and imposed consequences on anyone who aided runaways.

Abolitionist societies quickly mobilized to prevent the capture of runaway slaves or the kidnapping of free blacks. 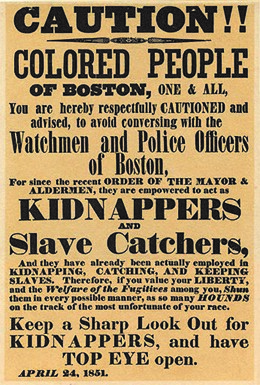 In October of 1850, abolitionists prevented the capture of William and Ellen Craft, two slaves who had escaped from Georgia. They harassed the two slave catchers sent to apprehend the Crafts, and helped the Crafts leave the United States. They ultimately settled in Great Britain.

Because the Fugitive Slave Act imposed heavy fines and prison sentences on anyone who aided runaway slaves, or refused to capture them, many northerners felt that the law forced them to serve as slave-catchers against their will. Furthermore, the law seemed to confirm the existence of a “Slave Power” — a cabal of elite slaveholders who used the power of the federal government to suit their interests.

The Fugitive Slave Act emboldened abolitionists. Some, including Frederick Douglass, advocated the use of violence to resist the law. According to Douglass, “The only way to make the Fugitive Slave Law a dead letter is to make half-a-dozen or more dead kidnappers.”

did you know
Historians estimate that slave catchers captured approximately three hundred runaway slaves under the Fugitive Slave Act between 1850 and 1861.

Ultimately, the Fugitive Slave Act was ineffective in returning runaway slaves to their owners. The cost of apprehending fugitives was too high for most plantation owners. More importantly, Congress did not primarily enact the law to facilitate the capture of runaway slaves. Rather, it was passed to test how well the North would uphold the Compromise of 1850.

did you know
Only half of the approximately three hundred runaway slaves captured under the Fugitive Slave Act were returned to the South.

Northern responses to the Fugitive Slave Act revealed that many northerners wanted nothing to do with the law. Along with the militant reaction among abolitionists, several northern state legislatures passed personal liberty laws during the 1850s.

Stipulated that a state would provide legal protection to anyone arrested under the Fugitive Slave Act, including the right to trial by jury.

The personal liberty laws demonstrated the North’s use of states’ rights to oppose the “Slave Power” perceived in the federal government. In the southern view, the Laws were evidence that northerners did not respect the Compromise of 1850, the Fugitive Slave Act, or slaveholders’ property rights.

The appearance of Harriet Beecher Stowe’s Uncle Tom’s Cabin; or Life Among the Lowly in 1851 influenced the national debate over slavery and runaways. 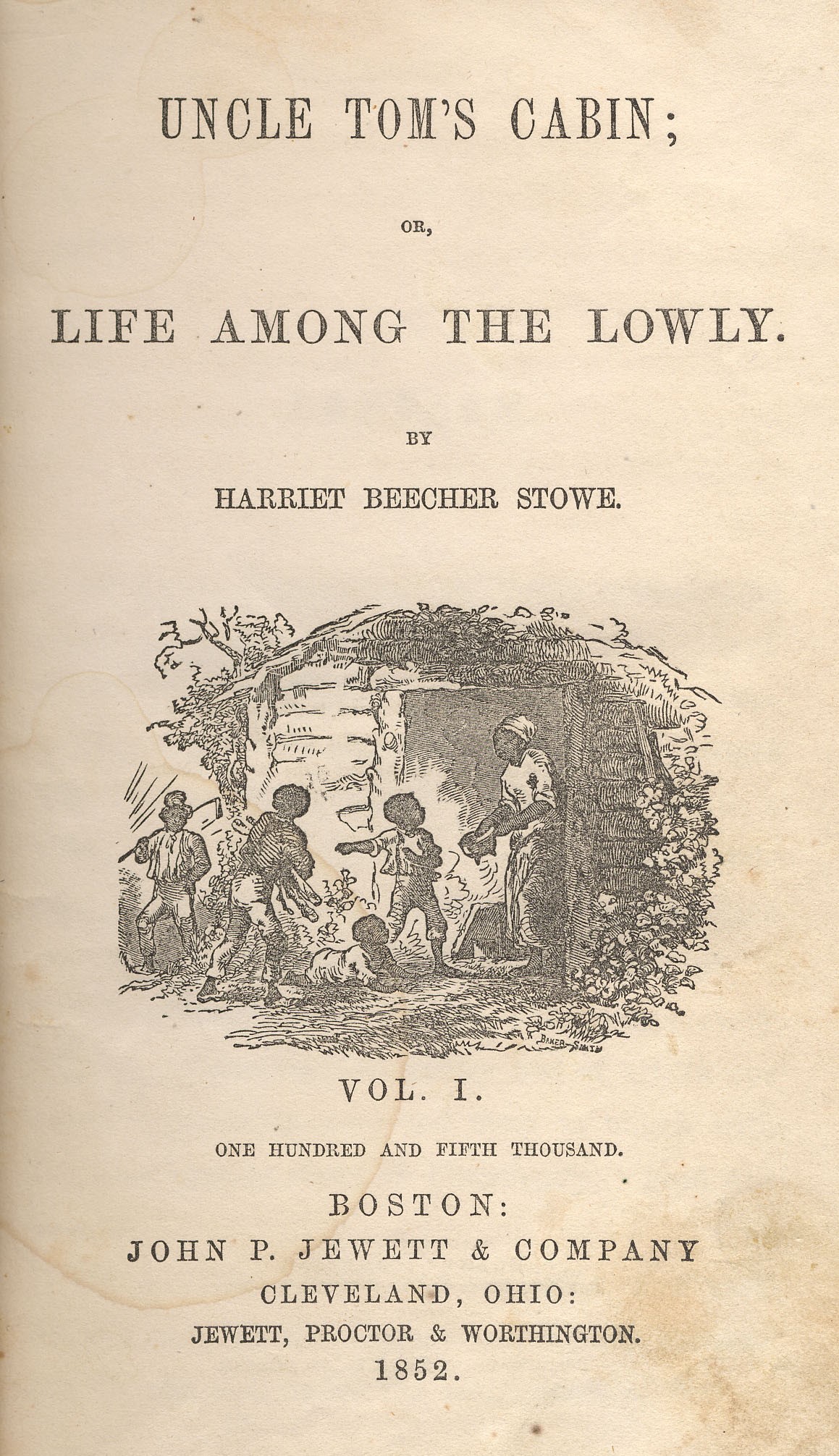 did you know
Uncle Tom’s Cabin first appeared as a series of stories in a Free Soil newspaper, the National Era, in 1851. It was published in book form the following year.

Partly inspired by the Fugitive Slave Act, Stowe’s novel is a tale of slaves who were sold by their Kentucky master. When Uncle Tom is "sold down the river" to the Deep South, young Eliza escapes with her baby in a harrowing flight to the free North and, ultimately, Canada. 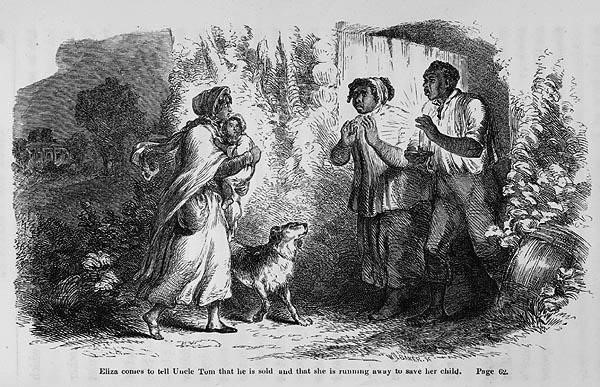 Stowe’s story reinforces the abolitionist belief that slavery is a sin by depicting how it destroyed families: separating children from parents and husbands from wives. She also demonstrates how slavery corrupted white people. The cruelty of slaveholders, who genuinely believed that slaves did not feel things the way white people do, and the brutality of slave dealer Simon Legree, who beat and sexually abused slaves, show that the dehumanizing effects of slavery impact whites as well as blacks.

Within a year of its release, Uncle Tom’s Cabin sold 300,000 copies and inspired theatrical productions and musical compositions — much to the consternation of white southerners.

did you know
Uncle Tom’s Cabin has been translated into sixty languages and remains in print today.

summary
The difficult process of reaching a compromise on slavery in 1850 exacerbated sectional fault lines in the United States exposed by western expansion. The proposed admission of California as a free state ignited months of hostile debate. Congress ultimately passed a series of laws — the Compromise of 1850 — that both sides hoped would solve problems that stemmed from western expansion. It did not. Northerners in particular feared the impact of the Fugitive Slave Act. Response to the Act highlighted the sectional divide in the United States.

Stipulated that the state would provide legal protection to any individual arrested under the Fugitive Slave Act, including the right to trial by jury

Democratic Senator from Illinois who led the Compromise of 1850 and the Kansas Nebraska Act through Congress; chief advocate for the doctrine of popular sovereignty in the 1850s.

Military hero of the Mexican-American War and slaveholder from Louisiana who was elected president in the election of 1848.

The Mexican-American War ends with the acquisition of new territories.

The Treaty of Guadalupe Hidalgo ends the Mexican-American War; The United States acquires the Mexican Cession; The Free Soil Party emerges in the election of 1848; Zachary Taylor is elected president.