The Election of 1860 and Secession

Identify the circumstances leading up to and resulting from southern secession in 1860.

(more)
See More
Tutorial
what's covered
The crises of the 1850s did nothing to quell the country’s sectional unrest. One more crisis, the attack on Harper’s Ferry by John Brown and a group of radical abolitionists in October of 1859, made compromise on the issue of slavery all but impossible. The subsequent election of Republican Abraham Lincoln as president in 1860 solidified the divisions between North and South. Throughout the 1850s, a handful of white southerners threatened to secede from the United States in defense of slavery. After 1860, they made good on their threat as eleven southern states left the Union to form the Confederate States of America, a nation dedicated to maintaining and expanding racial slavery.

This tutorial examines secession and the beginning of the Civil War in five parts:

On October 16, 1859, the radical abolitionist John Brown and a small group of armed men, both blacks and whites, attacked the federal arsenal in Harper’s Ferry, Virginia.

The site of a federal arsenal where, in 1859, John Brown attempted to instigate a slave revolt.

Brown wanted to capture the weapons in the armory. He planned to distribute them among slaves to instigate a revolt that would accomplish one of two outcomes: hasten the onset of civil war between North and South, or encourage a widespread slave uprising that would end slavery in the South. 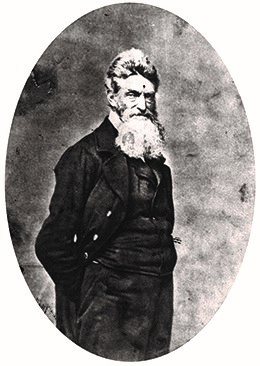 Brown’s force easily took control of the armory, which was lightly guarded. After that, however, the raid fell apart for several reasons:

Federal marines commanded by Colonel Robert E. Lee and Lieutenant J. E. B. Stuart captured Brown and his followers only a day and a half after the raid began. 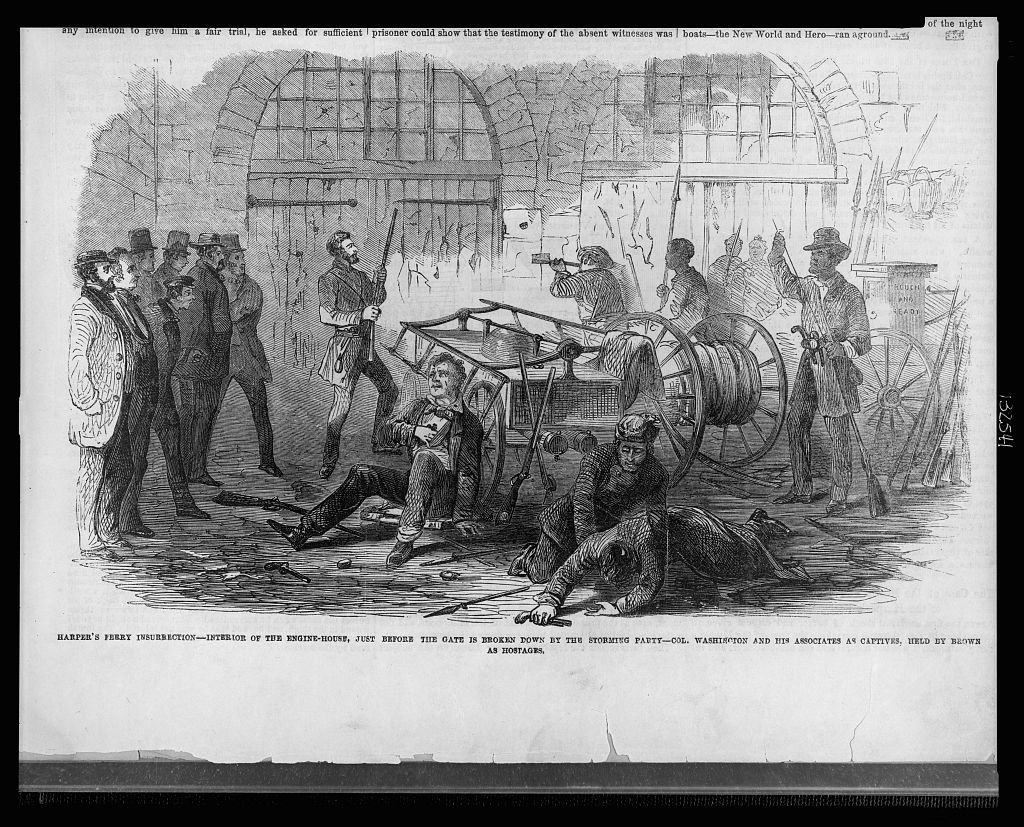 think about it
Do you think this illustration was intended for a northern or a southern audience? What evidence from the image can you use to support your opinion?

If the raid was not enough to inflame sectional tensions, Brown’s conduct during his trial and execution ignited them further. On the morning before his execution, he wrote a short note defending his actions.

“I, John Brown, am now quite certain that the crimes of this guilty land will never be purged away but with blood. I had as I now think vainly flattered myself that without very much bloodshed; it might be done.”

After his execution, northern public opinion viewed Brown as a martyr. Church bells throughout the North tolled during the hour of Brown’s execution. Leaders of northern African-American communities celebrated Brown by noting that he was one of the few white men who willingly sacrificed his life for the cause of racial equality.

Southerners worried about the possibility of similar plots and were alarmed by northern public opinion. After Brown’s execution, one Maryland resident asked whether it was possible to “live under a government, a majority of whose subjects or citizens regard John Brown as a martyr and Christian hero?”

Although northern political leaders quickly distanced themselves from Brown, southerners were outraged that a majority of northerners condoned his actions.

John Brown’s raid and subsequent execution was the final controversy related to slavery during the 1850s that contributed to the disintegration of the nation. This disintegration continued during the 1860 presidential election, won by Abraham Lincoln, and inspired southern secessionists to withdraw their states from the Union.

Lincoln’s victory owed much to disarray in the Democratic Party. Before the Party’s nominating convention began, several southern Democratic state organizations vowed to walk out if the party did not support the expansion of slavery into the western territories. When the Democrats nominated Stephen Douglas on a platform that promoted popular sovereignty in the West, southern delegates walked out.

In the aftermath of John Brown’s raid, leaders of the Republican Party searched for a moderate presidential candidate who could appeal to the minority of northern voters who were abolitionists, as well as the majority who opposed slavery due to their belief in free labor. They nominated Abraham Lincoln for several reasons:

The Republican platform encompassed Lincoln’s free labor views and addressed the party’s northern interests by including the following:

did you know
A fourth political party — the Constitutional Union Party, which was comprised primarily of former Whigs who did not support Lincoln or the Republicans — also participated in the Election of 1860. Its presidential candidate was John Bell of Tennessee, who ran on a pro-Union platform to preserve “the Constitution as it is and the Union as it was.” Bell never fully explained how he would accomplish this objective.

Given the partisan and sectional divisions, two presidential elections essentially took place in 1860: one in the North, between Abraham Lincoln and Stephen Douglas; and one in the South, between John Breckinridge and John Bell. 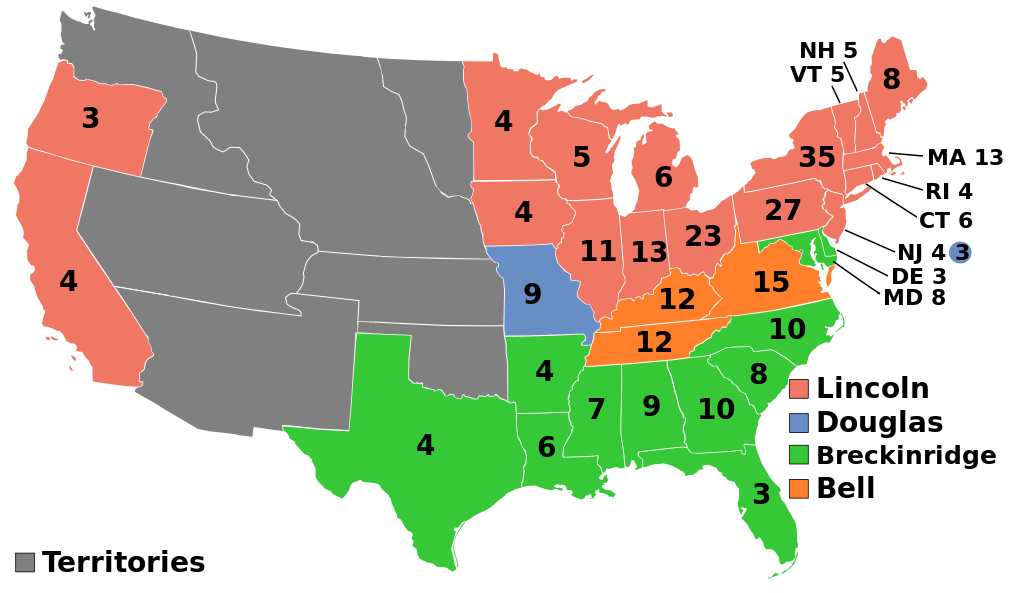 The electoral map reflects these sectional and partisan divides:

Lincoln won the presidency without receiving a vote in ten southern states, where he was not even included on the ballot. Democratic disunity also enabled the Republicans to make significant gains in Congress. From the Republican perspective, the Election of 1860 was a repudiation of the southern “Slave Power.”

did you know
Lincoln would have won the Electoral College even if the votes for his three opponents had been combined for a single candidate.

Southern states acted quickly in the wake of Lincoln’s election. Rather than accept minority status in a nation in which the majority was hostile to its way of life, and facing a government controlled by a political party (the Republicans) that threatened their economic system, southern leaders moved toward independence. 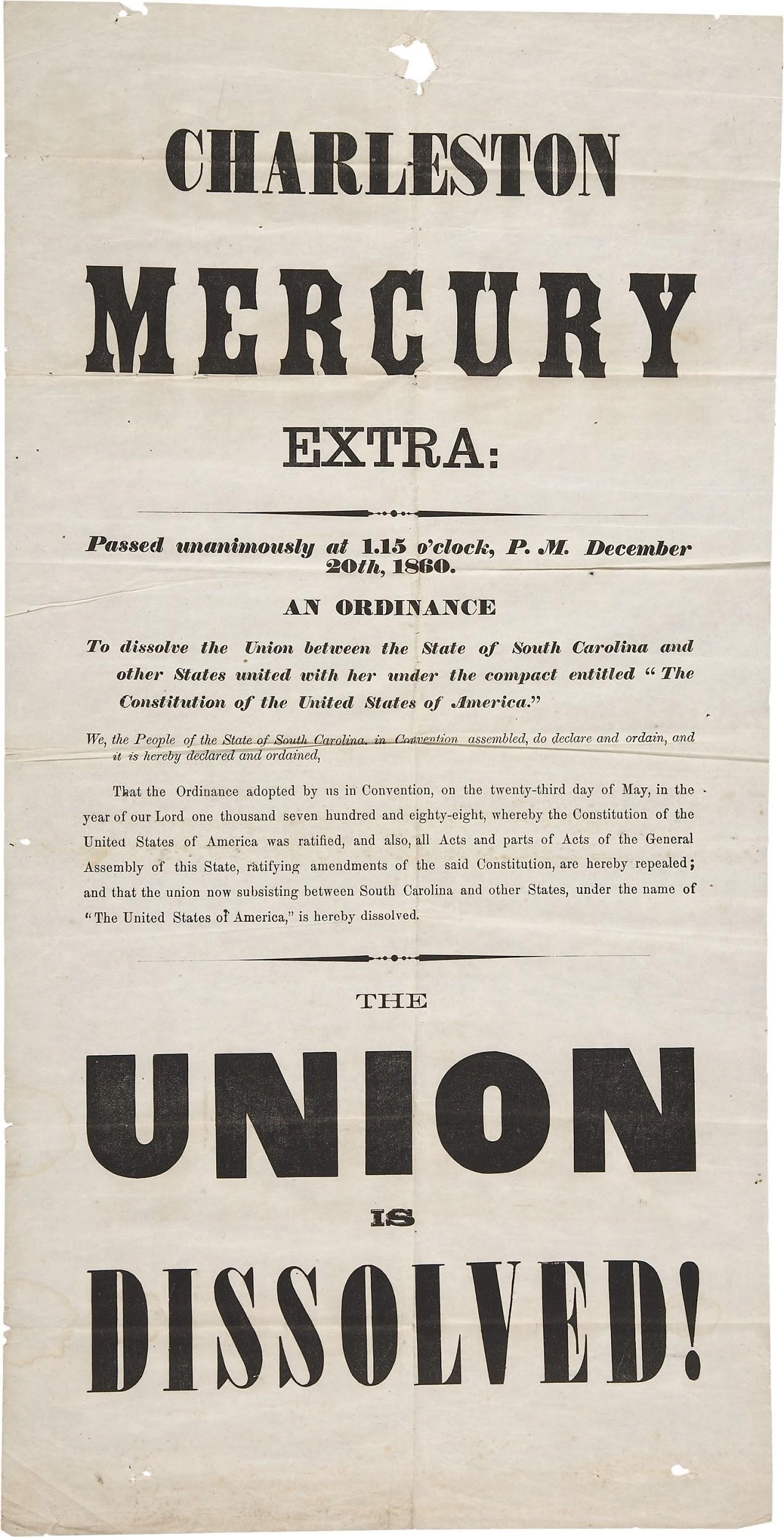 South Carolina, the state with the highest percentage of slaves in its population, was the first southern state to secede. It held a convention to examine the issue and, on December 20, 1860, the delegates voted unanimously to leave the Union before Lincoln’s inauguration. By February of 1861, six other states from the Deep South — Mississippi, Florida, Alabama, Georgia, Louisiana, and Texas — held conventions and seceded from the Union.

The delegates to these conventions justified secession and generated support for their efforts in the following ways:

4. The Confederate States of America

The Constitution of the Confederate States of America, or the Confederacy, drafted by the southern states in February of 1861, stated the reasons for secession.

The new nation formed by seceding southern states in 1861; also known as the Confederate States of America (CSA).

The Confederacy was not a federal union, but a confederation.

did you know
In a confederation, individual states agree to unite under a central government for some purposes, such as defense, while retaining autonomy in most other areas of government.

The Constitution of the Confederacy strengthened state sovereignty at the expense of national government.

State legislatures could impeach Confederate officials who worked within their boundaries. It also forbid the national government to assist in the construction of internal improvements.

The Confederate Constitution stated that the government must defend and perpetuate racial slavery. It protected the interstate slave trade, guaranteed that slavery would exist in new territory gained by the Confederacy and, perhaps most importantly, Article One, Section Nine of the Constitution stated that “No . . . law impairing or denying the right of property in negro slaves shall be passed.”

did you know
The Confederate Constitution resembled the U.S. Constitution in certain respects. For example, it created a Congress composed of lower and upper houses, a judicial branch, and an executive branch with a president who served a six-year term.

Delegates to the Confederacy’s constitutional convention chose Jefferson Davis of Mississippi and Alexander Stephens of Georgia as President and Vice President of the new country. 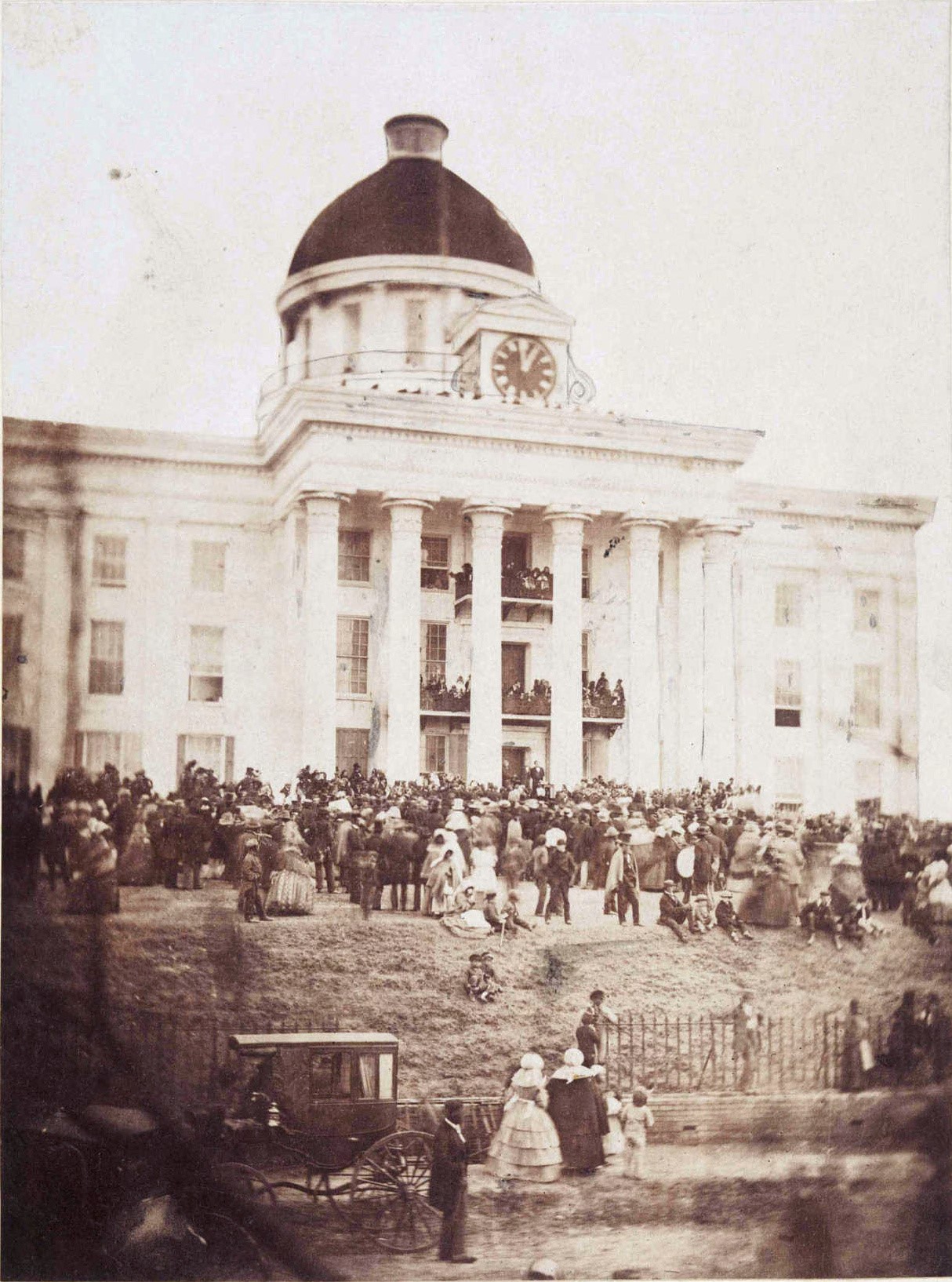 By the time of Abraham Lincoln’s inauguration on March 4, 1861, the Confederacy had already been established. In his inaugural address, Lincoln courted Virginia and the other slaveholding states that remained in the Union, saying, ““I have no purpose, directly or indirectly, to interfere with the institution of slavery in the States where it exists. I believe I have no lawful right to do so, and I have no inclination to do so.” In contrast, Jefferson Davis openly encouraged those same states to join the Confederacy.

In his inaugural address, Lincoln rejected secession, arguing that the Union could not be dissolved by the actions of a handful of states. While he did not mention re-taking federal property that the Confederacy had seized, he insisted that the United States would retain control of forts and other federal buildings situated in the Confederacy. Jefferson Davis, meanwhile, encouraged Confederate forces to seize federal property in the South.

Both presidents — Lincoln and Davis — walked a tightrope towards conflict, which erupted at Fort Sumter in April of 1861.

A federal fort in the harbor of Charleston, South Carolina, where the Union garrison came under siege by Confederate forces in an attack on April 12, 1861, beginning the Civil War.

Located in Charleston harbor, Fort Sumter was defended by a federal garrison of fewer than one hundred soldiers and officers. Their situation grew dire when local merchants refused to sell them food and supplies ran low. Lincoln notified South Carolina’s governor that he would resupply the garrison. His strategy was clear: If the Confederates opened fire on resupply ships, the decision to go to war would have been made by the South. 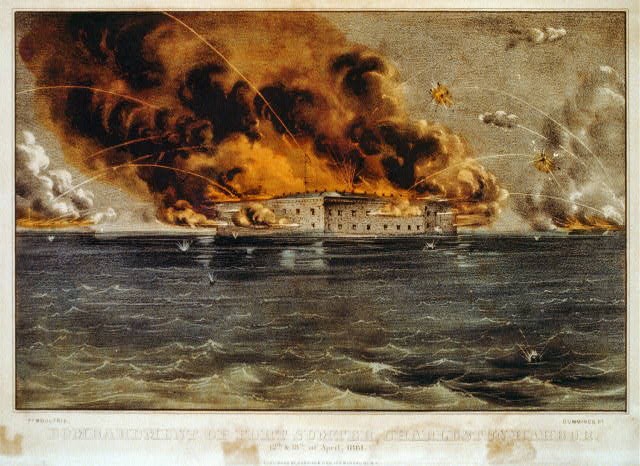 News of Fort Sumter’s surrender galvanized both sides. On April 15th, Lincoln proclaimed that a state of insurrection existed in the South and issued a call for 75,000 volunteers to subdue it. The response from northern states was overwhelming. Several northern governors notified Lincoln and the War Department that they would quickly fulfill their quotas and offered additional troops.

Virginia, North Carolina, and Arkansas voted to join the Confederacy. The capitol of the Confederate States moved to Richmond, Virginia, only ninety miles south of Washington, D.C. Thousands of young men rallied to the Confederate cause by enlisting in the army.

Delaware, Maryland, Kentucky, and Missouri chose to remain in the Union and became known as “border states”: slaveholding states that maintained allegiance to the Union.

did you know
Thirty-five counties in western Virginia, which contained approximately one-quarter of Virginia’s white population and identified more closely with the northern economy and culture, seceded from Virginia and ultimately formed the state of West Virginia. 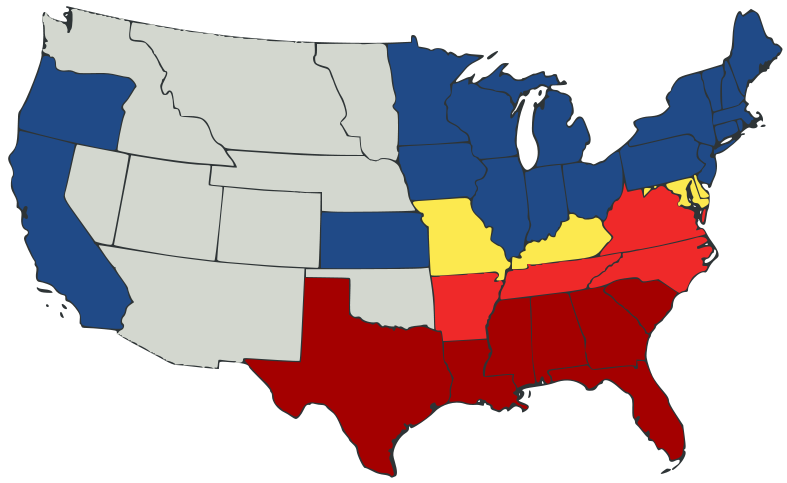 John Brown’s premonition that the nation’s crimes — the injustices and cruelty of slavery — would “never be purged away but with blood” had come true. The attack on Fort Sumter began the Civil War that had been feared for so long.

summary
A new level of animosity and distrust between North and South was reached in the aftermath of John Brown’s raid on Harper’s Ferry in 1859. These divisions led to the final breakdown of the second party system during the Election of 1860, as the Democratic Party split into sectional factions and Lincoln was elected President. His election prompted the secession of the southern states and the creation of a new nation, the Confederate States of America, dedicated to the protection and expansion of racial slavery. The attack on Fort Sumter in April of 1861 began the Civil War. The future of the American republic was in doubt.

The new nation formed by seceding southern states in 1861; also known as the Confederate States of America (CSA)

A federal fort in the harbor of Charleston, South Carolina, where the Union garrison came under siege by Confederate forces in an attack on April 12, 1861, beginning the Civil War

The site of a federal arsenal where, in 1859, John Brown attacked in an attempt to instigate a slave revolt

Prominent antislavery politician in the 1850s and Republican presidential candidate in the election of 1860; his victory led to the secession of the Confederate States of America from the Union and the eventual outbreak of the Civil War; author of the Emancipation Proclamation.

President of the Confederate States of America from 1861-1865.