Free Professional Development
Or
Close Popup
+
2 Tutorials that teach The Formulation of Universal Law
Take your pick:
Previous Next

The Formulation of Universal Law

Identify core precepts of the formulation of universal law.

Tutorial
what's covered
In this tutorial we will see what a maxim is, and how to evaluate it using a test derived from one of Kant’s formulations of the categorical imperative. Our discussion will break down like this:

To begin with, recall that Kantian deontology is a form of deontology that places absolute moral value in the agent’s intent. It doesn’t matter whether or not you succeed in bringing about what you intended.

Kant argued that an intention isn’t just any decision you make to do something. For Kant, intentions only move you to act in a certain way if they can be expressed as a kind of direction or command you give to yourself. Consider these examples. 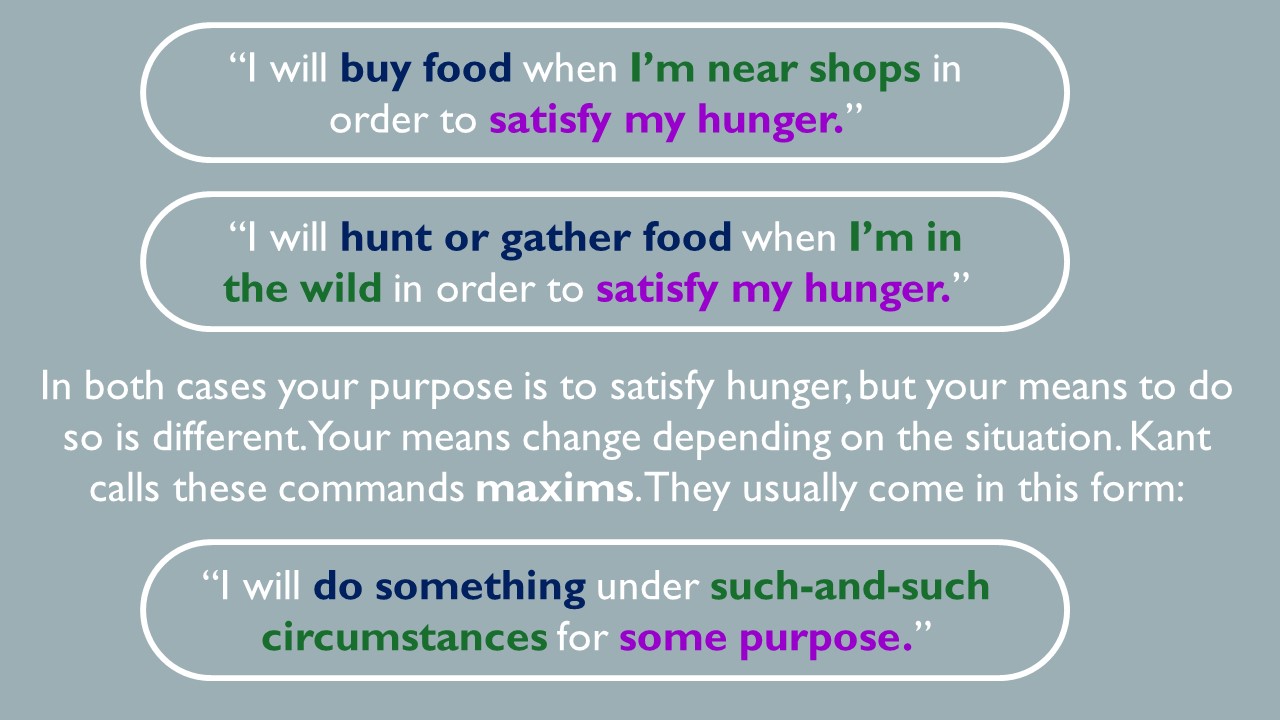 If you carry out a maxim, then you’ve realized it in an act. Since Kant doesn’t think morality depends on whether or not you achieve your purpose, he doesn’t evaluate the action. Instead, it’s the maxim that’s to be evaluated.

2. The Formulation of Universal Law

The idea of a categorical imperative is quite difficult to grasp. It’s fairly easy to think about a law or rule that applies to specific people.

You know that a driver should follow the rules of the road, or that doctors should obey the command to help the sick (they should uphold the Hippocratic Oath).

But what does a demand or imperative look like when it’s not relative to the person following it? In other words, what are the rules or laws that everyone should be following?

Kant was aware of this difficulty, so he gave different formulations of the categorical imperative to make it easier to understand. One of them is called the formulation of universal law. In short, it says you ought to act according to a maxim that everyone could use. If you want to put your maxim to the test, then you should see if it could be made universal like this. 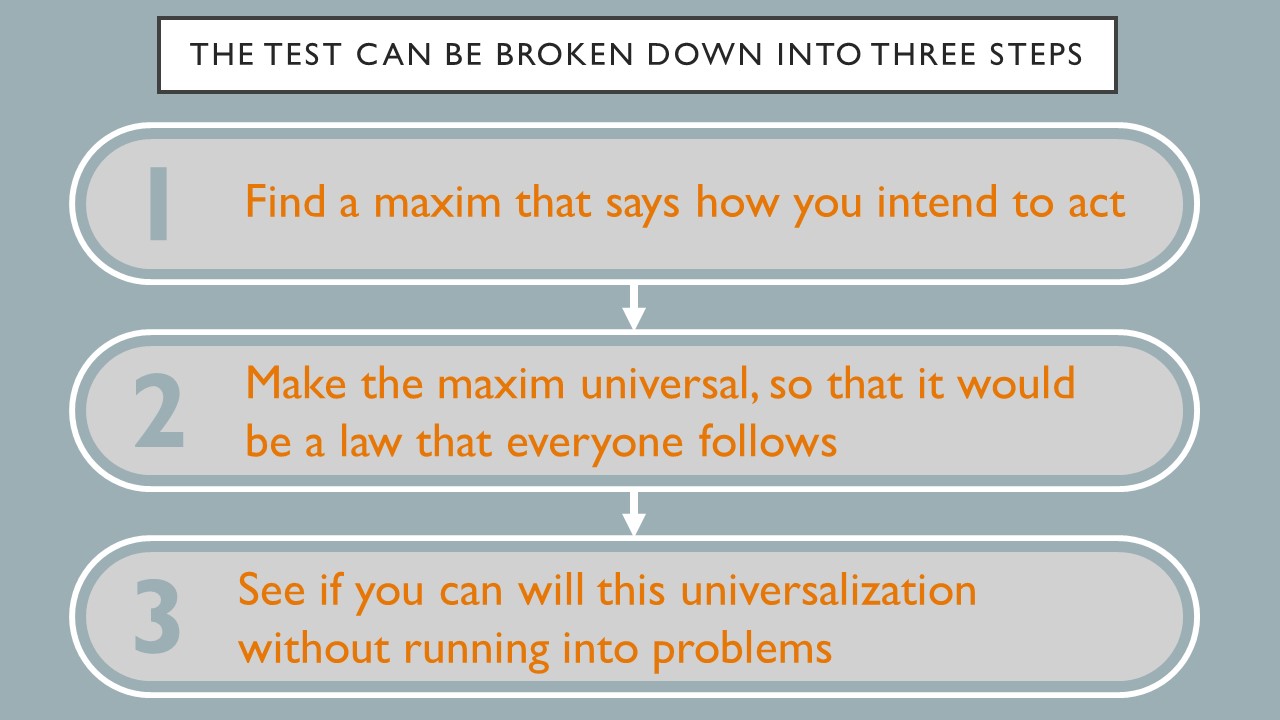 The problem that you might run into is called a “contradiction” by Kant. In the next section we will see more clearly what this means through some examples. For now, we can say that you run into contradiction if you aim at one thing with your maxim, but end up with the opposite of what you intended once the maxim is made to apply to everyone.

3. The Formulation of Universal Law in Practice

Let’s look at a case where you would run into contradiction if you were to make your maxim universal. Pay attention to the fact that this test is trying to show if a maxim makes sense when it’s made universal. It’s not trying to evaluate the consequences of making a maxim universal.

Imagine your maxim is: “When I’m losing a game of chutes and ladders I will cheat to win.” If this were universal, it wouldn’t just be you that could cheat when losing, but everyone.

But if there were no rules for chutes and ladders, how would you know when someone has won? So, if everyone intends to cheat, there wouldn’t be any rules in effect anymore. Without any rules there can’t be winners, thereby undermining your intention of winning by cheating.

hint
Remember that consequences are unimportant for deontological ethics. The universalization test doesn’t say that everyone cheating is bad because we wouldn’t like a world where this happened. It’s saying that it’s not even possible for everyone to cheat because this would undermine the very idea of playing a game with winners in the first place.

As long as you can universalize your maxim without a contradiction such as this, then it’s permissible.

Let’s say your maxim is: “If I borrow your book, I will keep my promise to return it.”

If everyone did this, would there be any contradiction? No, because the practice of lending would still be possible since people could be confident that they would get their things back. Therefore, you could will your maxim to be universal and still successfully act according to this maxim yourself.

summary
We started this tutorial by seeing that Kantian deontologists perform an evaluation of maxims rather than actions or their consequences. It was explained that a maxim is the principle of action that you use in certain situations.

Then we looked at how you can tell whether or not your maxim accords with the categorical imperative by testing it against the formulation of universal law. We saw that, if your maxim undermines its own aim when universalized, it fails the test. This shows that it violates the categorical imperative and is therefore impermissible. Finally, we looked at the formulation of universal law in practice by testing two maxims, one of which was permissible, the other impermissible.
Terms to Know