Or
Close Popup
+
2 Tutorials that teach The Hindu Temple
Take your pick:
Previous Next

Understand the basic features and function of the Hindu temple.

(more)
See More
Tutorial
what's covered
The art and architecture of Hindu temples contrasts greatly with that of the Indian Buddhist stupa. There are basic features of the Hindu temple, and the function of this temple is specific. In this lesson, you will learn about:

big idea
The vibrant art and architecture of the Hindu temple contrasts noticeably with the more reserved appearance of the Indian Buddhist stupa.

The art and architecture from today dates from the sixth to the 10th centuries AD, highlighted in the timeline below. This lesson will explore temple architecture and sculpture from two locations in India, Deogarh and Khajuraho.

Hinduism is an extremely old (roughly 4,000 years) system of beliefs. It is essentially considered a polytheistic religion that includes the worship of many variations or manifestations of many different deities. These many manifestations and many forms of deities appear to be simultaneously faces of a single god while retaining the individual characteristics of multiple gods.

This idea of multiple perspectives is fundamental to Hinduism, as it helps explain how Hinduism appears to weave between polytheism and monotheism. This is true despite the fact that at its core it lacks the sense of organization and monotheism of many other religions.

Hindu temples were considered a god’s home on earth. There is an interesting contrast between vibrant and occasionally shocking imagery on the exterior and the supposedly serene and calm atmosphere of the interior. Sculptural motifs in these Hindu temples are more than decorative, as the gods themselves are thought to be manifested through the imagery of the temple. They are sacred buildings. The mountain shape shikhara, referring to the peak of a mountain, is typical of northern-style temples. 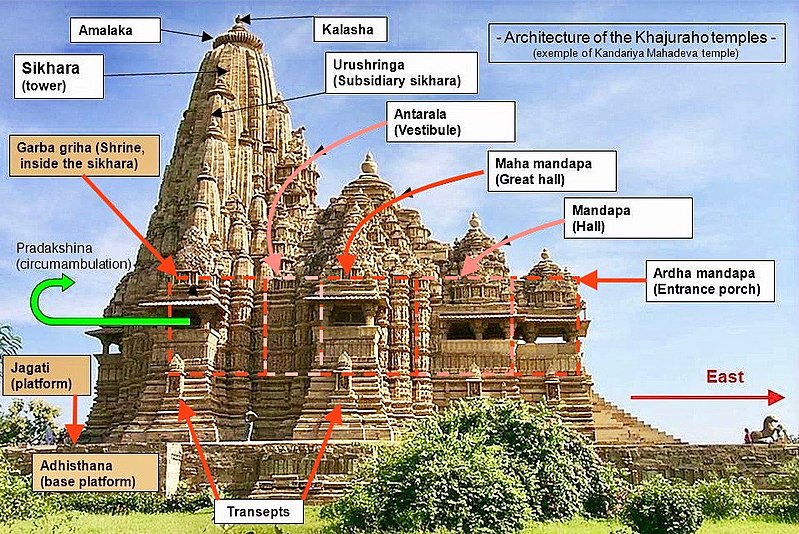 Ordinary worshippers stand near the entrance and mandapa, which is a public gathering place. The most sacred inner chamber, the garbhagriha, is essentially a “womb room” where the deities, idols, or icons are located. These rooms are only accessible by high priests, or brahman.

In Indian architecture, a pillared outdoor hall for public ceremonies

The innermost sanctum of the Hindu temple that houses deities, idols, or icons

The roof of a Hindu temple

Below is an image of the Vishnu temple from Deogarh.

did you know
Vishnu is one of the primary deities in Hinduism.

This is an old structure dating from 500 AD, and is an example of an earlier, simpler type of Hindu temple. It’s rectangular with a tower that originally would have been about 40 feet tall. Even though the building is rather simple in its design, it’s decorated with elaborate sculptural reliefs, in particular the sculptural guardians that protect the entrance.

Below is an outer view of the Kandariya Mahadeva temple complex at Khajuraho, India.

This is an example of the northern style of temple design in India. It’s made of sandstone.

The progressive dome shapes that culminate with the large shikhara, which is the mountain-shaped roof, are the most distinguishing features of the northern-style temple.

The Himalayan mountain range in the north of India was believed to be the home of Shiva, another principle deity. The temple design was symbolic of the gradual assent from foothill to the highest mountaintop in the Himalayas. In the interior, a garbhagriha under the shikhara contains the image of Shiva.

Here’s an image of some of the exterior sculpture at Kandariya Mahadeva:

And here is an image from another temple at Khajuraho, called the Visvanatha Temple:

did you know
Visvanatha means “lord of the world.” The above images, from the north side of the temple, are called the mithuna reliefs, which is a Sanskrit term related to sexual union.

think about it
Notice the individuals in these two images just above. They seem to be enjoying themselves. Why do you think images like this are located on the side of a religious temple?

These images are not something you would see on the side of the Western, or European style, church. The purpose of images such as this is debated among scholars, but one of the more plausible suggestions is that the imagery on the exterior is a positive representation of sexual relations as well as sexuality in its celebrated role within the religion. This idea sharply contrasts with negative views associated with sexuality that were and continue to be pervasive in Western religions.

Sexual union for the purpose of creating divine energy

This last image is of a solid bronze sculpture called the “Shiva Nataraja,” which means “lord of the dance.”

The above sculpture is intended to be portable, and is considered a physical embodiment of the deity, not just a sacred image. It was treated as the actual deity, and cared for like a real person. This personification was intended to encourage the bhakti, or active involvement, on the part of the worshipper. The bhakti was also a common form of worship that has a close association with Hindu temples, and is a unique form of worship that distinguishes Hinduism from other religions.

A god that people can relate to as a person, rather than as an energy force or other abstract concept

summary
The art and architecture of the Hindu temple contrasts greatly with other temples. In this lesson, you learned about the time period and location of the Hindu temple. Hinduism and the Hindu Temple were explored in this lesson. The idea of multiple perspectives is fundamental to Hinduism, as it helps explain how Hinduism appears to weave between polytheism and monotheism. Sculptural motifs in these Hindu temples are more than decorative, as the gods themselves are thought to be manifested through the imagery of the temple. These temples are sacred buildings.

Finally, you looked at examples of the Hindu temple:

Loving devotion to a deity that can be performed by any individual.

The innermost sanctum of the Hindu temple that house deities, idols or icons.

In Indian architecture, a pillared outdoor hall for public ceremonies.

Sexual union for the purpose of creating divine energy.

A god that people can relate to as a person, rather than as an energy force or other abstract concept.

The roof of a Hindu temple.

A series of beliefs and ritual practices that seek to channel divine energy.