Recognize factors that influence an objective historical interpretation of an event.

(more)
See More
Tutorial
what's covered
History is a tricky topic and can cover a lot of ground. For many students, "history" means the written record of the past that they encountered in high school textbooks, but it's much more than that. For this reason, we will cover the Historian’s Practice:


This tutorial examines what it means to study history in four parts:

The term history may seem easy to understand, but historians have debated its meaning for a long time. According to the American Historical Association (2011), history is “the never-ending process whereby people seek to understand the past and its many meanings”. In other words, history is the study of the past.

The study of the past

Even though history has been defined in other ways, sometimes sticking with the simplest definition is best. That doesn’t mean all answers are this simple, however. Many historians have debated what should be included in accounts of the past. These debates, and the questions that historians investigate, often reflect contemporary issues or concerns.

For example, historians have long written about military campaigns, empires, and famous leaders. However, the current focus on the environment and climate change has lead to the development and study of environmental and climate history. The study of U.S. history has grown to encompass a variety of subjects and sub-disciplines, including political history, social history, cultural history, intellectual history, etc.

The issues that can be investigated in U.S. history, and the questions that historians ask when investigating them, are limitless. So is the information. Historians must select the right information to create an honest and representative narrative of the past. The need for selectivity, though unavoidable, makes history subject to bias as well as interpretation.

Bias can enter historical accounts naturally. Historians, like everyone else, are sometimes prejudiced — for or against — an event, a group of people, or set of objects. The historian's challenge is to remain objective when interpreting the past, so that the results are accurate and acknowledge the historical context.

Prejudice towards one event, group of people, or set of objects when compared to another

Accounts of the past that do not take the historian’s personal views into account; unbiased history

Although objectivity is the historian's goal, it is impossible for him or her to fully separate personal experiences, ideas about the past, and understanding of truth from his or her interpretations of the past. Complicating matters further, historians must be aware of bias and worldview in the source documents they rely upon.

Reading about and interpreting the past can be more difficult than it sounds. While doing so, it’s important to remember that historians navigate all of these concerns — sometimes successfully, sometimes not. This is why defining history can be difficult for historians to do.

Throughout this course, you will be asked to think about a number of questions, putting you in the shoes of the historian. Historians study and interpret evidence from the past to create a narrative of events. They also ask themselves questions about past events and the nature of history in general. These questions might include the following:

Even though this course covers the history of the United States from 1877 to the present, we'll consider these questions as well. We will do so because understanding how history is created is just as important as learning about key events in the American past.

We may not often think deeply about the past, or engage in intellectual exchanges about the nature of history and the historian’s practice, but history is all around you. Many students experience it by reading a book on a topic like World War II or visiting historical landmarks like the Roman Colosseum. Others watch films or historical reenactments. Still others investigate genealogy or listen to family stories. 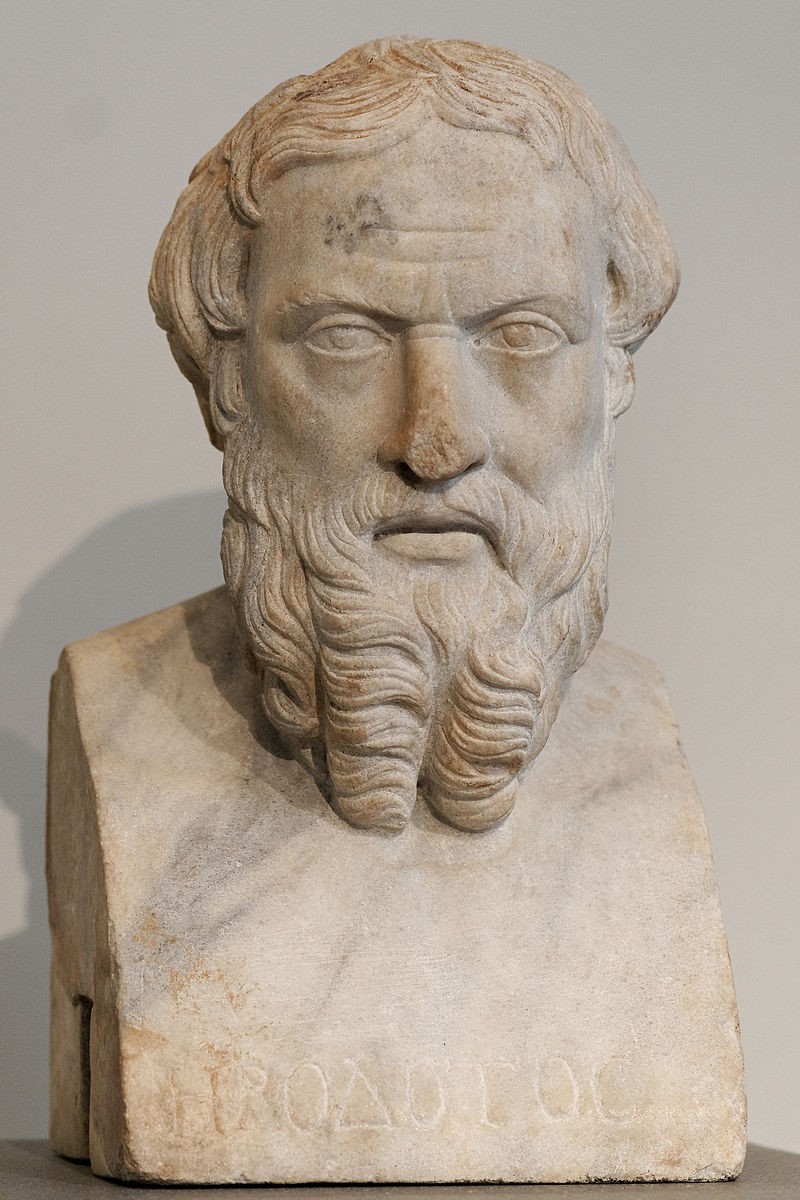 Most of us have studied history in a classroom by memorizing dates and names in order to answer questions about them. Learning history through memorization is an important part of becoming a historian. Historians compile verifiable information about past events (referred to as “facts” or the “truth”). They create narratives — stories — about the past, based on this information, so that it’s easier to understand.

The history-writing process becomes more complicated from this point forward, as historians take one of many perspectives on the past, select the information that is most relevant to their narrative, and connect events in a way that makes sense. The involvement of subjectivity in this part of the process has led to debate within the historical field on the best approach to history-writing.

History often traces past events in terms of change over time. For example, historians can examine the arguments that women made in opposition to slavery prior to the Civil War, and trace how those arguments evolved to the advocacy of women’s rights by the beginning of the 20th century.

Change over time is an essential part of the historical process — so essential that it is applied to historians themselves. Historiography is the study of historical writing: the history of history.

Historical interpretations of past events have changed over time. Ideas about how to write history have also changed. For example, for much of the 20th century, political and economic history were popular fields of study. During the 1960s and 1970s, as the United States grappled with the civil rights movement, the Vietnam War, and other social issues, a new field called social history emerged. Social history is the study of everyday people and the social groups to which they belong. The study of social history gave rise to other historical fields including women’s history, African-American history, and the history of the working class.

The emergence of social history during the mid-20th century shows that historical research is subject to the social, cultural, and intellectual environments in which it is written. It is important to understand that the historian’s practice is something that changes over time and, therefore, is something that can itself be viewed historically.

The history of the average person, especially in terms of demographic groups

Up to this point, we have discussed the historian’s practice using theoretical language. You might be asking yourself, how does this apply to U.S. History? Nearly all U.S. historians have asked themselves the same questions we’ve asked you in this tutorial. Other factors also contribute to the ways in which historians view historical events, including the time period in which they write, the primary and secondary sources they use, and the lenses that they apply to investigate those events and sources.

To learn how historians apply these questions and methods, let’s look at how some of them have approached the history of Reconstruction, the period in which the southern states were reintegrated into the Union following the Civil War.

Most U.S. history textbooks describe Reconstruction as beginning in 1865, when Confederate armies surrendered to Union forces. The Union’s victory ended slavery in the South and had the potential to transform American society. Following the surrender, a generation of former slaves struggled to gain a political voice in the south. Initially, the federal government supported them by ratifying the Thirteenth, Fourteenth, and Fifteenth Amendments, known collectively as the Civil Rights Amendments.

However, Reconstruction provoked violent reactions from white southerners, lukewarm responses from many white northerners, and political polarization between the Republican and Democratic parties. Following a bitterly-contested presidential election in 1876 between Rutherford B. Hayes (Republican) and Samuel J. Tilden (Democrat), one in which neither candidate received an electoral majority, an appointed electoral commission decided the election in Hayes’s favor in early 1877. In exchange for winning the White House, Hayes and the Republicans recognized Democratic electoral victories in South Carolina and elsewhere in the South, victories accomplished through the intimidation of African-American voters. By 1877, the year that many textbooks indicate as the end of Reconstruction, the South had been readmitted into the Union, but Reconstruction’s larger goals — interracial democracy and equal protection for all citizens — remained out of reach. 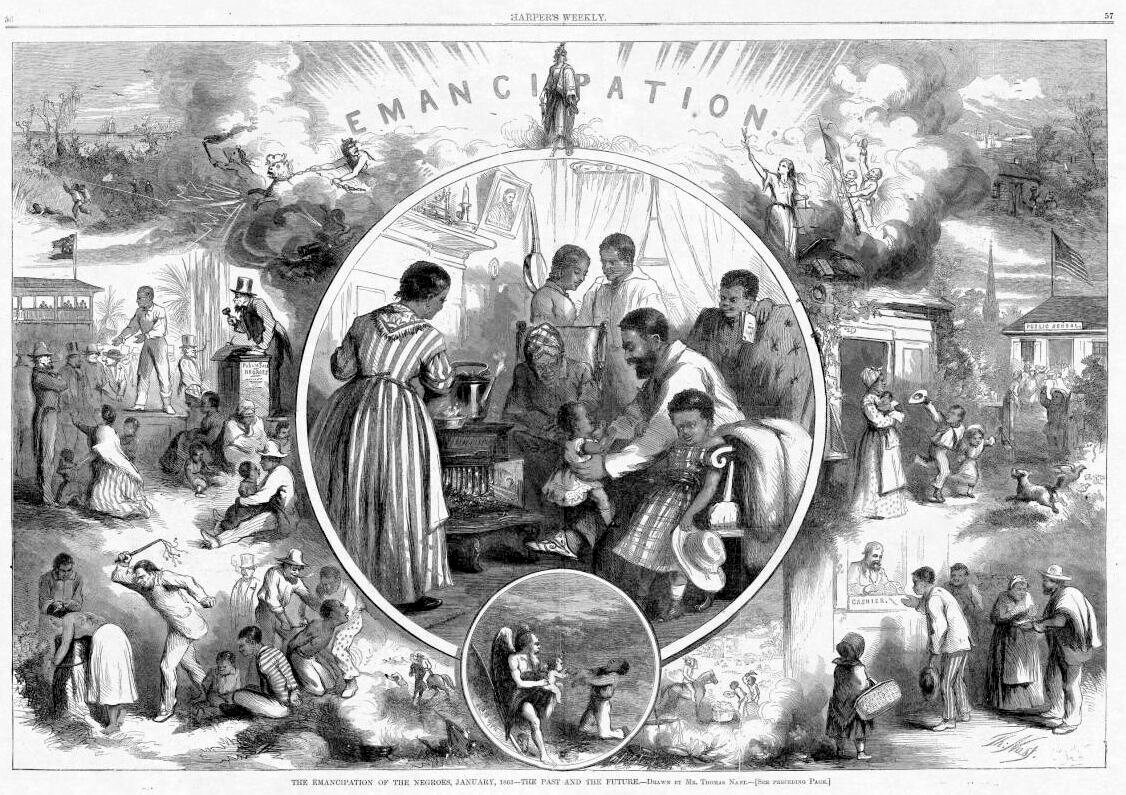 Textbook accounts of Reconstruction have changed over time, as historians' interpretations of it have changed. Racial segregation, and a desire among white Americans to reconcile divisions between North and South during commemorations of the Civil War, affected initial interpretations of Reconstruction. Historians William A. Dunning, John W. Burgess, and a generation of their students during the late 19th and early 20th centuries argued that Reconstruction was a disaster for the South because Congress abolished slavery and attempted to extend political rights to African Americans. They ignored the contributions that black soldiers made to the Union Army during the war, and celebrated the ways in which white southerners resisted Reconstruction and reestablished state governments that (rightfully, they believed) limited economic and political opportunities for African-Americans.

For a time, only African-American writers, most notably W. E. B. Du Bois, challenged this interpretation of Reconstruction. In Black Reconstruction: An Essay toward a History of the Part which Black Folk Played in the Attempt to Reconstruct Democracy in America, 1860-1880 (1935), Du Bois placed African Americans at the center of the Reconstruction narrative. He identified former slaves, northern free blacks, and their white allies as key agents who fought to abolish slavery, restore the Union, and establish a democracy based on racial and economic equality. He argued that their efforts were opposed at every turn by white southern property owners, who sought to exploit black labor, and northern business interests that aimed to profit from southern resources.

The historiography of Reconstruction continued to evolve during the mid-20th century, as the civil rights movement undermined segregation and exposed the effects of racial inequality to Americans. Historians of this period observed contemporary conflicts over civil rights while looking back at Reconstruction. Due to the rise of Social History, they closely examined the experiences of groups that previous histories of Reconstruction had omitted: black politicians in the South, women and families, and poor southern whites. Many 20th-century studies concluded that Reconstruction’s failure to establish a democracy based on racial and economic equality contributed to the persistence of racial and social injustice in American society.

A current and widely-accepted interpretation of Reconstruction was proposed by historian Eric Foner, who describes the period as “America’s Unfinished Revolution”. Like Du Bois, he argues that African Americans and their white allies played an active, positive role in Reconstruction. He asserts that their efforts had the potential to remake southern — indeed, American — society in the decades that followed.

According to Foner, issues of equality and the role of government in people's’ lives “were the questions on which Reconstruction persistently turned”. Many contemporary historians agree, and go on to assert that these questions are as old as the United States. Inequality persists in American society, and debate over the role that the federal government should play to alleviate it continues. Thus, Reconstruction was — and is — “America’s Unfinished Revolution”.

This course gives you an opportunity to explore the issues that Americans during Reconstruction struggled to address.

summary
In this tutorial, we have examined the historian’s craft. The creation of historical narratives can be a complicated and hotly-debated topic. We have outlined some of the primary roles and responsibilities of historians, including objectivity, and the ways that historians have approached the past. We've also highlighted the role that historiography plays in the creation of historical narratives. Finally, we covered some of the ways in which historians have interpreted Reconstruction.

Prejudice towards one event, group of people, or set of objects when compared to another

The study of the past

Viewing past people and events without taking the historian’s personal view into account. Unbiased history

The history of the average person, especially in terms of demographic groups