The Impact of News of Expected Returns

(more)
See More
Tutorial
what's covered
In this lesson, you will learn about news, announcements, and credit ratings and how they impact an investment's value. Specifically, this lesson will cover:

Surprise announcements can trigger a chain of events that affect the stock price of a particular company, competitors and other companies that might be suppliers to or customers of the primary company.

Announcements of mergers and acquisitions (M&A) are a frequent type of surprise announcements. Mergers and acquisitions is a category of announcement that deals with corporate structure. When the announcement is publicly made, analysts use that information to factor into the company’s long-run market outlook. A merger or an acquisition could signal to an analyst that one particular company is financially weak, and it could downgrade its long-run outlook for that company. Alternatively, an M&A announcement could also signal to analysts that a company has a chance to increase its market share and henceforth, its profits.

These announcements typically make the biggest splash in a top-heavy industry, such as automobiles, pharmaceuticals, or healthcare, with a few strong players dominating a market that is researching, developing, and innovating new products.

Other announcements that can have a variety of impacts on asset valuation can come in the form of a major court decision, news of development of new research and innovation, FDA approval of a new drug, or a new cheap source of raw materials. Any of this news has the potential to impact a particular company and, in some cases, competition, suppliers, and customers of that company. In many cases, there will be signals that analysts pick up on ahead of time. Investors who are actively making investment decisions based on a particular company or within a particular industry need to be aware of how a surprise announcement might affect their investment.

Fixed-income market participants also make forecasts on the long-run health of a company to project the likelihood an issuer of debt might default. A company’s instruments are subject to move in the event of an aforementioned announcement or if a private rating agency, such as Standard & Poor’s or Moody’s, changes its outlook on their debt. If a news announcement is seen as positive for a company, its fixed-income instruments might seem more creditworthy, its bonds will rise in price, and its yield will decline. The inverse is also true.

Below is an example of the credit ratings prescribed by Standard & Poor’s as a result of their respective long-term liability analysis for debt issued at the national government level. The scale goes from AAA, meaning there is minimal credit risk, to D, where they are most likely in default, with little chance of recovery.

think about it
Consider how expensive it is to raise capital for such projects based on geographic region.

An aspect of corporate strategy, corporate finance, and management dealing with the buying, selling, dividing, and combining of different companies and similar entities that can help an enterprise grow rapidly in its sector or location of origin, or a new field or new location, without creating a subsidiary, other child entity, or using a joint venture.

The words stock and equity are used interchangeably, because a stock is reflective of a piece of ownership in a company. In general, investors buy stocks for two reasons:

Analysts may research a stock from a fundamental or a technical lens. Fundamental analysis involves analyzing a company’s financial statements and health, its management and competitive advantages, and its competitors and markets. In order to predict future changes in price and volume, analysts will evaluate historical price and volume fluctuations.

A stock’s price is essentially determined by the buying and selling decisions of fundamental and technical analysts, who often manage large sums of money and have access to broad pools of data. Some stocks tend to fluctuate more than others on a day-to-day basis, and the metric called beta (β) describes the variance of a stock's day-to-day price. Stocks that tend to experience larger swings have higher beta values and expose owners to more specific risk.

In order for a company to be publicly traded on an exchange, it must comply with the regulations of that exchange board (NYSE or NASDAQ). Public investors are entitled to complete, accurate, and timely financial information about their investments. Companies generally announce updated financial figures on a quarterly basis. These figures include their current revenues, expenses and profits, and investors use this information to assess the company’s financial health. For most established companies, these reports are consistent and predictable and barely affect a stock’s price.

Macy’s may announce higher profits in Quarter 4 than Quarter 3, but its price might not move, because analysts expected that Christmas would bring additional sales based on past data.

When a company announces its earnings as higher or lower than expected, the stock may experience a sudden shift in value. A higher-than-expected profit may come from increased revenues or decreased expenses. If a growing company announces higher-than-expected profits because of decreased expenses, it signals to investors that the company has found a cheaper way to produce its goods. That could, in turn, affect the expected returns of a competitor’s stock, either positively or negatively, depending on how analysts forecast the effect.

The announcement of higher-than-expected sales from Ford could affect its stock price significantly, and it could set into motion a chain of events. If analysts believe that the trend is based on a shift away from public transportation, it could raise the price of GM, Toyota, and maybe even Chevron.

If Nvidia, a company who produces micro-processors for smart phones, announces higher than expected profits on reduced production costs, it might not only cause their stock to spike, but it could lead to a decrease in the price of the stock of their primary competition, Intel.

think about it
Consider the image below. Data shown is from the period of Jan. 1990-Sep. 2009. Volatility is measured as the standard deviation of S&P 500 one-day returns over a month’s period. The correlation of 0.769 suggests that the volatility of the stock market in one month is very highly correlated to that in the previous month. 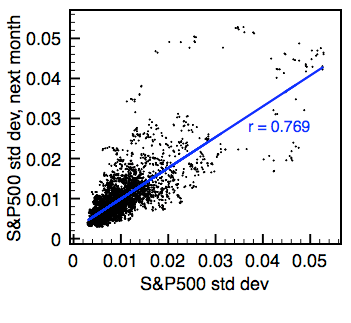 A number describing the correlated volatility of an asset in relation to the volatility of the benchmark that said asset is being compared to.

summary
In this lesson, you learned that events can have a sudden impact on the expected return of an investment, and thus contribute to risk. Surprises such as a merger or acquisition announcement, a court ruling, or a research development can unexpectedly change the valuation of an asset and thus its return. Announcements or news about a company’s earnings or other measures of its financial health can also impact expected returns. In some cases, individual stock fluctuations can have an effect on the volatility of the market overall.

Source: THIS CONTENT HAS BEEN ADAPTED FROM LUMEN LEARNING'S “The Impact of News of Expected Returns” TUTORIAL.

A number describing the correlated volatility of an asset in relation to the volatility of the benchmark that said asset is being compared to.

An aspect of corporate strategy, corporate finance, and management dealing with the buying, selling, dividing, and combining of different companies and similar entities that can help an enterprise grow rapidly in its sector or location of origin, or a new field or new location, without creating a subsidiary, other child entity, or using a joint venture.