Or
Close Popup
+
2 Tutorials that teach The Incident Stage of Conflict
Take your pick:
Previous Next

The Incident Stage of Conflict

Identify representations of the incident stage of conflict.

Tutorial
what's covered
While there are a number of ways that conflict can be broken into stages, all models look at three large phases: pre-conflict, conflict, and post-conflict. In this lesson, we will discuss the second stage within the conflict phase by focusing on:

Recall that the pre-conflict stage is when an issue may be brewing, but you're not really aware of what it is. Then there's the actual conflict stage, and the post-conflict stage when things are resolved.

Within the conflict phase, the first stage is often the feeling of discomfort that something is wrong. Following discomfort is the incident stage of conflict, in which parties become aware of how each other's roles impact unmet needs. Awareness is attained through a concrete occurrence in their relationship.

The stage of conflict in which parties become aware of each other’s roles in needs not being met through a concrete occurrence in their relationship. 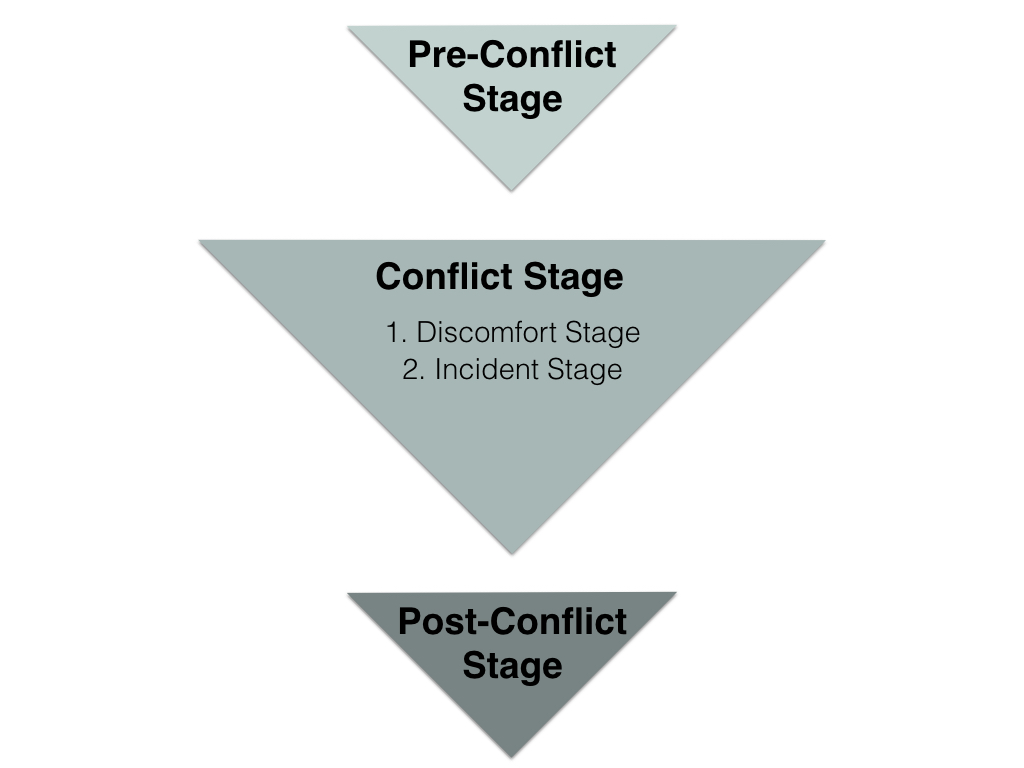 At your job, there have been a lot of new projects going on, and management has recently hired some new people. You've been asked to do a little bit of training or mentoring of one of these people, and you’re a little uncomfortable with the way this relationship is going.
At a recent team meeting, your trainee shares an idea, presenting it as his own. While everyone is impressed, this was actually your idea. Now you feel betrayed because you're not getting the credit for this work.

You have recently had to work a little extra, so your nine-year-old son doesn't have a place to go after school. In order to save money on daycare, your spouse suggests that his/her sister take care of your son. You feel a little uncomfortable because things are a bit loose over at your sister-in-law's, but you agree. You drop your son off after school, and things seem to be working out in terms of saving money.
But today your son came home and talked about a movie he watched over there, and it's a movie that you did not want him to see. Now that you know this incident has happened, you’re not comfortable with your sister-in-law providing this after-school care for your son.

In each example above, what particular need is not being met? How might you go about resolving these issues?

2. THE ROLE OF THE INCIDENT STAGE IN THE CONFLICT RESOLUTION PROCESS

During the incident phase of conflict, there is often a tendency to minimize the incident by saying or thinking things such as:

"Oh, he didn't really mean to take credit for the idea." "Maybe he didn't realize what he was doing." "Maybe they showed him the wrong movie by accident." "This has never happened before."

Despite the attempt at minimization, the incident affects the relationship as the knowledge of its occurrence lingers.

Thus the conflict could have begun here, or it might actually have begun back in the discomfort stage. Because conflicts can escalate and de-escalate between stages, it’s best to resolve the conflict at the earliest possible stage.

If the conflict is already in the incident stage, you could perhaps go to the coworker you've been training and ask to talk with him. You can share that you were a little uncomfortable with his remark in the meeting. Having this conversation actually brings the issue into the open at this stage.

You could talk to your sister-in-law and revisit the conversation about what you expect when your son is at her home. This would be the time to try to resolve the conflict because it's still in an early stage.

summary
In this lesson, you learned about the incident stage of conflict, and how despite the impulse to minimize the incident, opening a dialogue in this stage can make the conflict resolution process much easier.