Identify elements of an income statement that aid valuation.

(more)
See More
Tutorial
what's covered
In this lesson, you will learn about elements of an income statement that aid valuation. Specifically, this lesson will cover:

The income statement is the financial statement responsible for informing past performance, forecasting future performance, and evaluating the organization’s ability to produce future profits. It has also been referred to as a statement of operations, profit and loss statement, or the statement of earnings.

The income statement consists of revenues and expenses, along with the resulting net income or loss over a period of time due to earning activities. Net income, or the “bottom line," is the result after all revenues and expenses have been accounted for. The income statement reflects a company’s performance over a period of time. This is in contrast to the balance sheet, which represents a single moment in time. 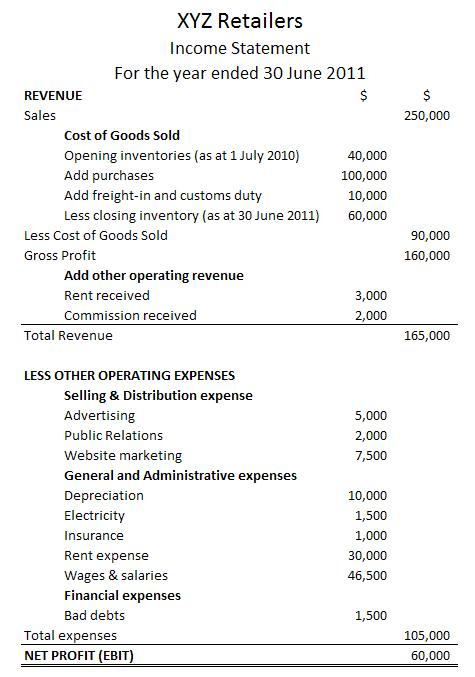 The more complex multi-step income statement (as the name implies) takes several steps to find the bottom line. First, operating expenses are subtracted from gross profit. This yields income from operations. Then, other revenues are added and other expenses are subtracted. This yields income before taxes. The final step is to deduct taxes, which finally produces the net income for the period measured.

The difference between net sales and the cost of goods sold.

1a. Operating Revenues and Expenses

The operating section includes revenue and expenses. Revenue consists of cash inflows or other enhancements of the assets of an entity. It is often referred to as gross revenue or sales revenue. Expenses consist of cash outflows or other using-up of assets or incurrence of liabilities.

Elements of expenses include:

1b. Non-Operating Revenues and Expenses

The non-operating section includes revenues and gains from: In essence, if an activity is not a part of making or selling the products or services, but still affects the income of the business, it is a non-operating revenue or expense.

Certain items must be disclosed separately in the notes if it is material (significant). This could include items such as restructurings, discontinued operations, and disposals of investments or of property, plant and equipment. Irregular items are reported separately so that users can better predict future cash flows.

In viewing an income statement, the last line, net income, is often referred to as the bottom line. This is what remains after all expenses have been subtracted from revenue. This number is important to investors in order to determine the profit that is available to shareholders at the end of the year.

For companies with shareholders, earnings per share (EPS) are also an important metric and are required to be disclosed on the income statement.

3. Limitations of the Income Statement

Income statements are a key component to valuation but have several limitations stemming from estimation difficulties, reporting error, and fraud.

One of the limitations of the income statement is that income is reported based on accounting rules and often does not reflect cash changing hands. This could be due to the matching principle, which is the accounting principle that requires expenses to be matched to revenues and reported at the same time. Expenses incurred to produce a product are not reported in the income statement until that product is sold.

In addition to good faith differences in interpretations and reporting of financial data in income statements, these financial statements can be limited by intentional misrepresentation. One example of this is earnings management, which occurs when managers use judgment in financial reporting and in structuring transactions to alter financial reports in a way that usually involves the artificial increase (or decrease) of revenues, profits, or earnings per share figures.

If a manager earns his or her bonus based on revenue levels at the end of December, there is an incentive to try to represent more revenues in December so as to increase the size of the bonus.

While it is relatively easy for an auditor to detect error, part of the difficulty in determining whether an error was intentional or accidental lies in the accepted recognition that calculations are estimates. It is therefore possible for legitimate business practices to develop into unacceptable financial reporting.

Stands for first-in, first-out; method for accounting for inventory and assumes that the oldest inventory items are recorded as sold first.

Stands for last-in, first-out; method for accounting for inventory and assumes that the most recently produced items are recorded as sold first.

4. Effects of GAAP on the Income Statement

Although most of the information on a company’s income tax return comes from the income statement, there often is a difference between pretax income and taxable income. These differences are due to the recording requirements of GAAP for financial accounting (usually following the matching principle and allowing for accruals of revenue and expenses) and the requirements of the IRS’s tax regulations for tax accounting (which are more oriented to cash).

Rent or other revenue collected in advance, estimated expenses, and deferred tax liabilities and assets may create timing differences.

Also, there are events, usually one time, which create “permanent differences,” such as GAAP, which recognizes as an expense an item that the IRS will not allow to be deducted.

Non-cash items that are reported on an income statement will cause differences between the income statement and cash flow statement. Common non-cash items are related to the investing and financing of assets and liabilities, and depreciation and amortization. When analyzing income statements to determine the true cash flow of a business, these items should be added back in because they do not contribute to inflow or outflow of cash like other gains and expenses.

Fixed assets, also known as a non-current asset or as property, plant, and equipment (PP&E), is an accounting term for assets and property. Unlike current assets such as cash accounts receivable, PP&E are not very liquid. PP&E are often considered fixed assets; they are expected to have relatively long life, and are not easily changed into another asset. These often receive a more favorable tax treatment than short-term assets in the form of depreciation allowances.

Broadly speaking, depreciation is a way of accounting for the decreasing value of long-term assets over time.

A machine bought in 2012 will not be worth the same amount in 2022 because of things like wear-and-tear and obsolescence.

The distribution of the cost of an intangible asset, such as an intellectual property right, over the projected useful life of the asset.

Source: THIS CONTENT HAS BEEN ADAPTED FROM LUMEN LEARNING'S "THE INCOME STATEMENT" TUTORIAL.

The distribution of the cost of an intangible asset, such as an intellectual property right, over the projected useful life of the asset.

Stands for first-in, first-out; method for accounting for inventory and assumes that the oldest inventory items are recorded as sold first.

The difference between net sales and the cost of goods sold.

Stands for last-in, first-out; method for accounting for inventory and assumes that the most recently produced items are recorded as sold first.