Or
Close Popup
+
Previous
1.2 Analyzing Primary Sources
Next
1.4 The First Settlers
The Lenses of History
Settling the Americas: 10,000BCE - 1700
0
of 0 possible points

The Lenses of History

Given a situation, identify which historical lens is being used.

Tutorial
what's covered
In this tutorial, we will examine the varied ways that historians interpret the past. History can be a complex and multi-sided phenomenon, requiring multiple ways of viewing people, events, and places that have existed. This is especially true of American history. We will explore the various lenses that historians might apply when interpreting or narrating the past, particularly the lenses of: race, class, and gender. We will use the example of the history of American slavery to illuminate these lenses.

1. The Lens as a Metaphor for History

These questions are often quite difficult for anyone studying history to answer and can lead historical inquiry down a variety of paths.

For this reason, it is often helpful to think of the historian trying to capture the past as a photographer with a camera. The historian can use and apply a variety of lenses, like a photographer, that change or influence the picture of the past that is being created. 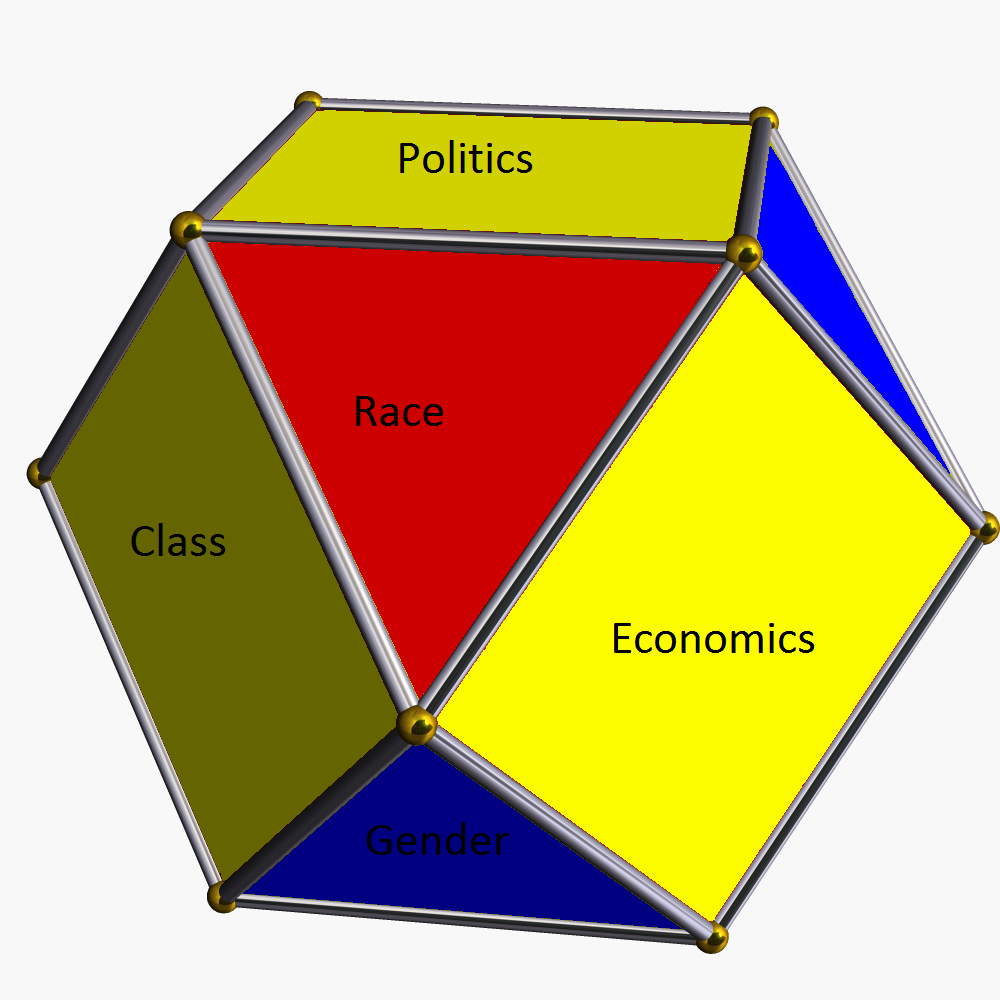 Another way to think about the historical lens is to imagine a multi-sided geometric shape similar to a diamond or a tetrahedron much like the image above. In the middle of this shape is the historical document, event, person, or place that the historian is studying. The interpretation of that document, event, person, or place will change, however, depending on which side of the tetrahedron you are on.

Analytical approach that a historian may take when interpreting and creating narratives about the past.

It is important to note that even though your interpretation of the past may shift depending upon the lens you use (i.e., your perspective), all lenses are interconnected and part of the same geometric pattern that is history. It is also important to note that there is no set number of perspectives to take. Historians constantly develop new questions, approaches, and methods to interpret past events. All of these techniques expand the size and breadth of historical lenses.

One way to tell the history of American slavery is to think about and analyze it through the lens of class. Class refers to the structuring of human society in terms of economic position and status. In other words, to view American history through the historical lens of class you would examine the economic systems that defined not only the experiences of slaves, but also the ways that slavery defined American history.

The structuring of human society in terms of economic position and status.

Karl Marx was probably the biggest advocate for using class as a tool to understanding history. In 1846, he described American slavery by writing:

Direct slavery is just as much the pivot of bourgeois industry as machinery, credits, etc. Without slavery you have no cotton; without cotton you have no modern industry. It is slavery that has given the [European] colonies their value; it is the colonies that have created world trade, and it is world trade that is the pre-condition of large-scale industry. Thus slavery is an economic category of the greatest importance. (as cited by Marx, 1955)

In other words, Marx interpreted slavery as an economic system that exploited slave labor for the benefit of the upper classes (i.e., “bourgeois industry”). A class view of enslavement means to emphasize the economic conditions in which they worked. 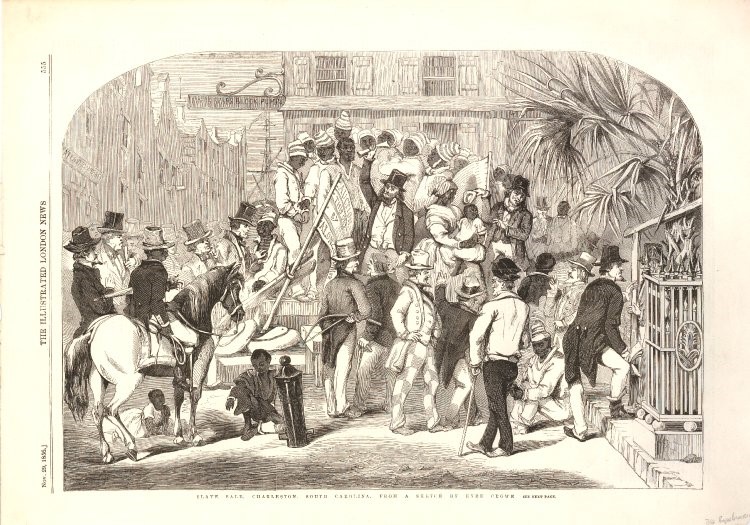 The image above is of an 1856 slave auction in Charleston, South Carolina. This is an example of the type of space where slaves were bought and sold in the U.S. Many historians would analyze a photograph like this through the lens of economics or class. They would explain that slave auctions took place in a marketplace where money exchanged hands between slave merchants and plantation owners. Historians could conclude that slaves were forced into economic conditions defined by merchants or slave owners who profited from their labor.

Historians could continue to use a class-based narrative and argue that slave labor created an elite class of slaveholders and merchants who gained significant political influence in the U.S. These people most likely supported secession and later the Confederacy during the Civil War. In this way, focusing on class sheds light not only on the types of marketplace interactions that occurred in American systems of slavery but also explains how slavery influenced the entire American political system and American history as a whole, as Marx suggested.

Viewing American slavery in terms of class represents only one lens to interpret the past. Historians have also turned to the lens of race as a way to better understand U.S. history and American slavery, in particular. The term race is commonly used today, but was not always the case. Race is a concept that has shifted over time and has changed meaning since slavery was legal in the U.S.

The classification of humans into groups based on skin color or other physical characteristics and features. 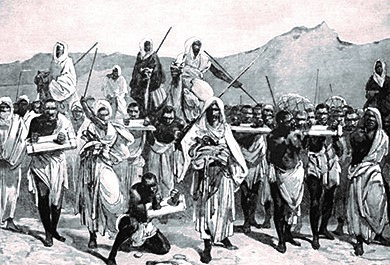 The practice of using enslaved labor for profit or trade existed prior to the formation of the U.S. The image above depicts slave traders in North Africa. This form of slavery was used for hundreds of years before the first slave market was created in North America. In the pre-North American slave trade, slaves were most likely transported to other regions of Northern Africa and possibly even Europe.

Contemporary observers and subsequent historians have argued that a new form of human bondage evolved in the Americas following Christopher Columbus’ voyage in 1492. This form of enslavement gave rise to a system characterized by race or the viewing of African-born slaves as part of a different race from that of White European masters.

Because of this racialized form of slavery, the American system of enslavement took on characteristics defined by race. For example, during the early 19th century slave owners in the Southern states argued that their slaves were members of the “Negroid” races and, therefore, a completely different species than their “White” counterparts. This led to a series of attributes that were identified with each of the “races.” These attributes ultimately served to reinforce the social and economic system that was slavery.

Viewing American slavery in this way has also allowed historians to argue that race and class were both part of the same history. Discussions of race and the slave economy feed off of one another and deepen our understanding of U.S history.

Another lens that historians have used in their approaches to understanding the past is that of gender. This term generally refers to the social and/or cultural vision of what it means to be male or female. Historians have used this analytical tool to consider how gender was used to help create the sense of racial difference between White-European-slave owners and their Black slaves. The contrast between the gender roles for White Europeans and Blacks was used to support the development of the race-based system of slavery.

The social and/or cultural vision of what it means to be male or female.

When Europeans settled in North America in the 16th and 17th centuries, they brought with them ideas about gender and men and women’s proper roles. These roles differed from those of various African groups. As the system of African slavery was taking hold in the New World, Europeans increasingly began to justify their enslavement of Africans through a process of social differentiation. This process of differentiation was accomplished, in part, by comparing African women to European women.

For example, historians have found that representations of African women in travel narratives published by European mariners and traders in the late 1500s and early 1600s helped reinforce the perception of racial distinctions. These travel narratives, which were widely read, depicted African women as: culturally coarse, highly sexual, and accustomed to hard agricultural labor. This contrasted with the European ideal of women who were supposed to be refined, modest, and responsible for the home. These travel narratives helped fortify the sense that Africans were different in crucial ways from Europeans.

In this way, ideas about gender helped European slaveholders justify their enslavement of Africans. This is just one example of the way in which historians have been able to show how race, gender, and class interacted in the history of slavery in the U.S.

think about it
Can you think of three major events of American history that you could apply the lenses of class, race, and gender to?

summary
This tutorial has painted a picture of the historian’s practice as one that occurs under the analytical tool of multiple lenses. There are varied and unique ways to approach the past and these approaches are almost always interconnected. To make this case, we gave a brief overview of how historians have interpreted the history of slavery in the U.S. using the lenses of: class, race, and gender.

We have only scratched the surface of these historical lenses. This tutorial has shown that when historians apply historical lenses to their subjects, our understandings of the past become far richer and more complex. When reading future tutorials, think about race, class, gender, and other historical lenses that historians have applied. How do these lenses influence our interpretation of American history?

The structuring of human society in terms of economic position and status.

The social and/or cultural vision of what it means to be male or female.

The analytical approach that a historian may take when interpreting and creating narratives about the past.