- Introduce standard units of measure (meters, grams, and liters) and the physical properties that they represent

- Demonstrate how to convert between units

- Demonstrate how to express measurements in scientific notation

The Metric System, its base units, prefixes, stairstep and fraction conversion methods.

Why to use the metric system

1.  Every other country but America uses it.

2.  Most people who use the British Standard Engineering system don't know many of its units.  Rods, hogshead, barrels, slugs etc.

3.  Scientists use it exclusively.

I could go on.  The Metric or SI system of units has a couple other advantages.

2.  It is based on standards that are found in nature readily.

The basis of the system

If you take a box that is 1/10th of a meter on each side and fill it to the brim with water, you will be looking at a Liter of water.

If you hold this same box and neglect the mass of the box you are holding a kilogram of water.

If you build a pendulum 1 meter long and let it swing it will swing once per second.

These were some of the original standards used by the French Systeme Internationale des Unites (SI).  These standards all have their own problems, warps in Earth's crust, microfluctuations in gravity, temperature and pressure dependence of water's density, etc.,  These problems have been fixed by comparing the standards to light, but the examples above were first.

Thanks to soft drink manufacturers you have held 2 Liters and 2 kilograms in your hand.  Perhaps you've even held a 1 Liter soda at some point.  A meter is a little more than 3 feet.  The distance of a doorknob to the ground. 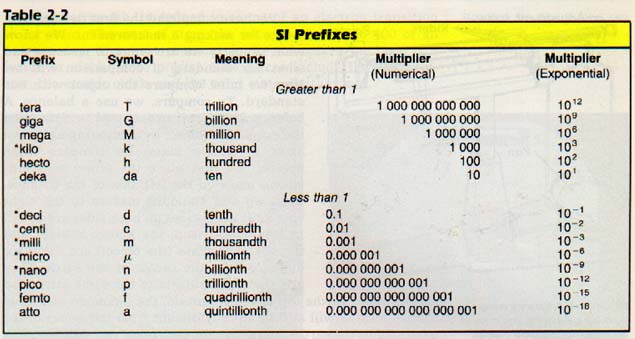 The Metric System is governed by a set of prefixes that are the same for every base unit.  They are above in a simple format.  There are 6,000,000,000 people on Earth.  That would be 6 Gigapeople or 6 Gp.

Thanks to memory storage devices for computers most people know that a Gigabyte of memory is more than a Megabyte.  The others you may not have used, yet.

If you use the correct fraction from the chart and flip it to cancel the units, you can achieve the same result. This method is a little more useful for very large or very small units.

The internet can do it for you

Click on the calculator and it will take you to a site that can do it for you.

Check your work with it if you want to.