Free Professional Development
Or
Close Popup
+
2 Tutorials that teach The Misunderstanding Stage of Conflict
Take your pick:
Previous Next

The Misunderstanding Stage of Conflict

Identify the best course of action for addressing a conflict in the misunderstanding stage.

Tutorial
what's covered
While there are a number of ways that conflict can be broken into stages, all models look at three large phases: pre-conflict, conflict, and post-conflict. In this lesson, we will discuss the third stage within the conflict phase by focusing on:

Recall that the pre-conflict stage is when an issue may be brewing, but you're not really aware of what it is. Then there's the actual conflict stage, and finally, the post-conflict stage when things are resolved.

Within the conflict phase, the very first stage is often the feeling of discomfort that something is wrong. Following discomfort is the incident stage, where something either minor or major happens to bring the conflict out in the open.

Next is the misunderstanding stage of Conflict, in which parties begin to view each other negatively based on their differing interpretations of interactions.

The stage of conflict in which parties are communicating, but are adopting negative views of each other due to differing views and interpretations of messages, actions, beliefs, and/or motives. 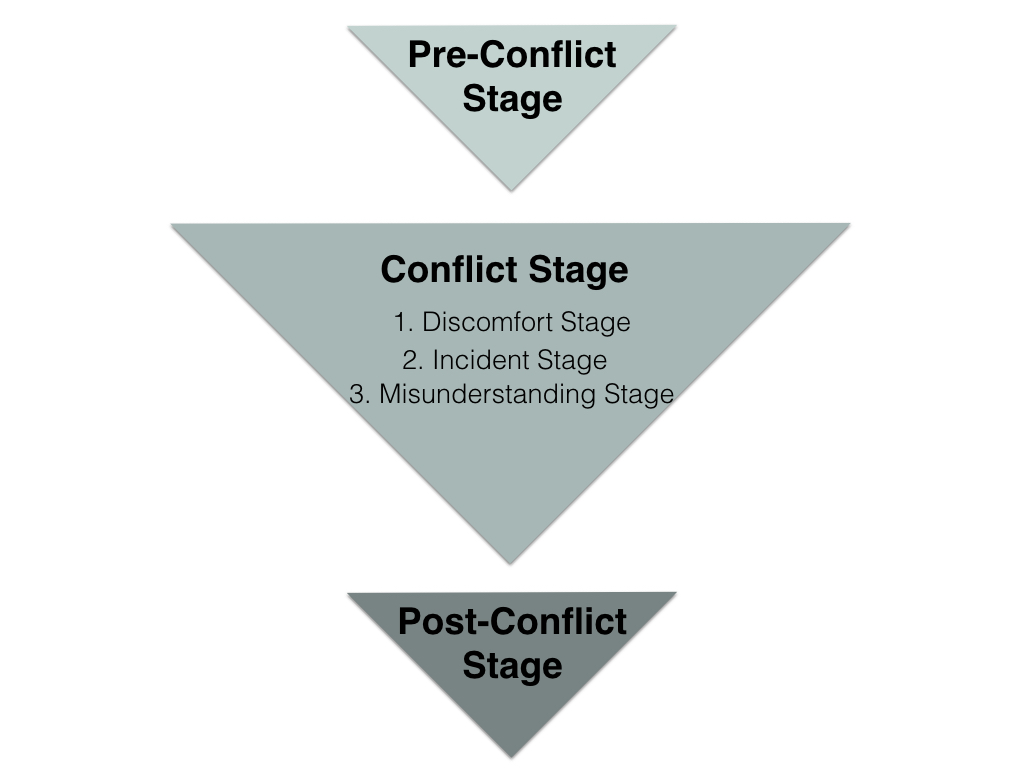 Let's look at some ways this could occur.

You have been preparing a large dinner for a holiday gathering. This includes planning the menu and preparing the food, both of which depend on the responses from people about whether or not they can make it. Your sister-in-law hasn't given you a concrete answer. At first she said she could attend, then she said she probably couldn’t.
At the last minute, she calls and says she is coming. She then shows up with three extra people that you weren't expecting. Now you’re scrambling to figure out to serve the extra people because of this misunderstanding.

Things have been very busy at your job. One of the people on your team keeps sending you snippy emails. Do this, do that, where's this, where's that. You are put off by it and wonder, "Who does he think he is, sending me these emails?"

2. THE ROLE OF THE MISUNDERSTANDING STAGE IN THE CONFLICT RESOLUTION PROCESS

In a misunderstanding or potential misunderstanding, a party is having a reaction to an incident that has happened. Remember that conflict can start at any stage, but it's important to address it at the earliest possible stage because conflicts can escalate or de-escalate back and forth throughout the stages. Let's look at how to address a conflict in the misunderstanding stage.

You decide to talk to your sister-in-law about why she came to the gathering with three extra people that you didn't even know about. Through this conversation, you discover that she did leave you a phone message, but you never received it. The message pops up on your phone the next day.

You’ve been feeling resentful about these emails from your coworker, so you decide to talk to him about it. You might say, "You know, I'm really upset. What's with all these emails? I kind of feel like I'm being bossed around here."
By sharing your feelings, you learn that your coworker has been so busy that he’s just been trying to get his emails sent and hasn’t been paying attention to the tone or how he might be coming across. He absolutely didn’t mean anything by it.

Can you think of a conflict you've been a part of that involved a misunderstanding? How did you handle the situation? Did it escalate, or were you able to resolve it early on?

As you can see from these examples, if something is a true misunderstanding, it’s easy to get things ironed out at this point in the conflict. This is why it’s always best to address a conflict at the earliest stage possible.

summary
In this lesson, you learned about the misunderstanding stage of conflict. If an incident is truly the result of miscommunication, opening a dialogue in this stage can make the conflict resolution process much easier.

The stage of conflict in which parties are communicating, but are adopting negative views of each other due to differing views and interpretations of messages, actions, beliefs, and/or motives.