Free Professional Development
Or
Close Popup
+
2 Tutorials that teach The Tension Stage of Conflict
Take your pick:
Previous Next

The Tension Stage of Conflict

Identify the characteristics of the tension stage of conflict.

Tutorial
what's covered
While there are a number of ways that conflict can be broken into stages, all models look at three large phases: pre-conflict, conflict, and post-conflict. In this lesson, we will discuss the fourth stage within the conflict phase by focusing on:

Recall that the pre-conflict stage is when an issue may be brewing, but you're not really aware of what it is. Then, of course, there's the actual conflict stage, and the post-conflict stage when things are resolved.

The stage of conflict in which parties find communication with each other difficult or impossible, consistently attribute negative traits to each other, and may attempt to enlist allies. 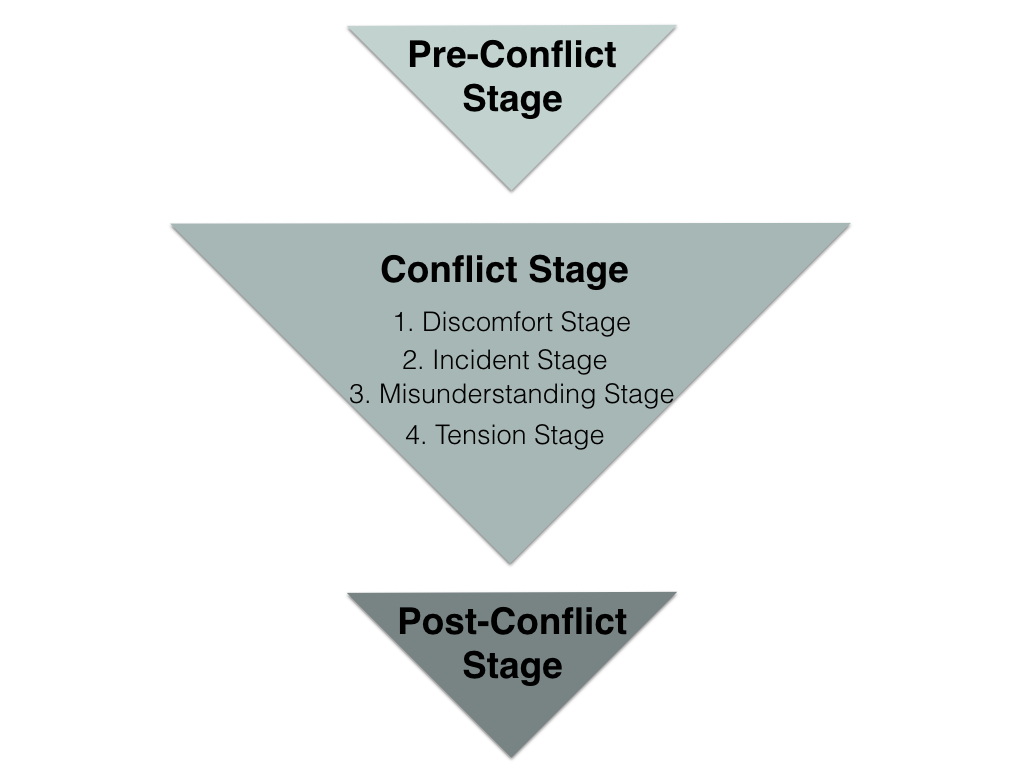 Let's look at some examples. Imagine yourself in these situations and think about how you would attempt to resolve the conflict.

Susan is having a conflict with her siblings over what to do with their elderly father. He's been living in the family home, and for years that seems to have been working out okay. She's been checking on him every week, and sometimes she's been making meals for him. Recently, however, he fell. Susan had a talk with his doctor, and she feels like maybe it's time for him to move out of the home. Susan’s brother, John, agrees with her, but her two sisters do not agree. Each time they've all sat down to discuss this, it's become more and more tense. It's now at the point where Susan and her brother can’t seem to talk to their other two sisters. Susan is feeling as though she can't even be heard, and nobody understands the care she's been giving. She's been closest to the situation, and things just unraveled. She feels the only person she can talk to is John; the tension between her and her sisters is building because of this family dilemma. Her dad doesn't want to move, which of course makes it even more difficult to discuss with her siblings.

You’re working on a project at work that isn’t going very well. You believe this is because the team member that you're working with wants to rush things. If you rush things and get them wrong, you'll have to go back and redo them; you would like to take your time. Your coworker is accusing you of wasting time, but you feel as though things need to be checked; you have an actual process. You work a lot differently than your coworker. You're not quite sure how she's going to get this project done if she doesn't follow the protocol. You've been talking to others on the team who agree with you, and she's been talking to other people about you. In fact, you just saw an email that she sent, in which she said some very negative things about you. It has reached a point where you don't want to speak to her and you're uncomfortable going to work. Because of this tension, you don't know how the two of you will get the project done.

2. THE ROLE OF THE TENSION STAGE IN THE CONFLICT RESOLUTION PROCESS

Remember that during a conflict, the stages can escalate or de-escalate back and forth from tension, to misunderstanding, to discomfort. Thus it’s always a good idea to address a conflict at the earliest possible stage.

Once a conflict has reached the tension stage, it might be very difficult for the conflicting parties to even talk to each other. In this case, they may decide they need some outside help.

At work, you might decide that you need to talk with the team leader about the project. Bringing in the team leader to discuss your concerns might be a way of stepping in to help at this point during the tension stage.

Have you ever been in a conflict similar to the ones in the examples where you had to seek outside help? In hindsight, do you think the conflict may have been resolved more easily if it had been addressed in an earlier stage?

summary
In this lesson, you learned about the tension stage of conflict, and how bringing in an outside party to facilitate the conflict resolution process can be very effective if the tension between parties has reached a high point.

The stage of conflict in which parties find communication with each other difficult or impossible, consistently attribute negative motives and traits to each other, and may attempt to enlist allies.