Understand Theodore Roosevelt's reasons for advancing progressive reforms during his time as President.

(more)
See More
Tutorial
what's covered
Robust recovery from the financial crises of the 1890s and resounding victory in the War of 1898 swept President William McKinley and the Republicans back into the White House in 1900 by a solid popular majority. McKinley’s new vice president was his former Assistant Secretary of the Navy: the famous Rough Rider, Theodore Roosevelt.

When President McKinley was assassinated in 1901, Roosevelt became the youngest President in the nation’s history. His administration ushered in an era of progressive national politics and changed the role of the President for the 20th century.

This tutorial examines Theodore Roosevelt and the Square Deal in four parts:

Theodore Roosevelt’s presidency contributed to the emergence of Progressivism on the national scene.

A movement that proposed legal, scientific, managerial, and institutional solutions to the ills of urbanization, industrialization, and corruption between 1890 and 1919

The Progressive Era (1890-1919) was a time when activists and reformers of diverse backgrounds and agendas advanced a variety of causes to improve America. Referred to as Progressives by historians, they responded to challenges that had emerged during the Gilded Age, including the following:

The first attempts to solve these problems developed at the grassroots level. They involved a range of people and approaches including Walter Rauschenbusch and the Social Gospel, Jane Addams and the Settlement House Movement, and muckraker journalists like Jacob Riis.

An early social reform movement, led by women, which offered a variety of social services to the urban working poor

Investigative journalists and authors who wrote about social ills, including child labor and the corrupt practices of big businesses, and urged the public to take action to correct them

Progressive movements and organizations included a diverse range of viewpoints, but historians have identified a set of principles that were shared by most Progressives:

With its dedication to expanding democracy, expertise, and active government to solve problems that had emerged during the Gilded Age, the Progressive Era marked the emergence of modern liberalism in the United States.

Although Progressive movements were supported by a wide range of Americans, many were white and native-born; members of a new middle class that emerged at the end of the 19th century.

A social group that included managers, salesmen, and other salaried workers and their families, who were more educated and better-compensated than the working class

Many middle-class citizens responded to the challenges of modern, industrial, America as Progressives. They saw themselves as the agents of social justice and reform, as well as stewards of the disadvantaged. Unfortunately, their belief in their expertise led some of them to disregard the voices of those they sought to help, including workers, immigrants, and racial minorities.

2. The Rise of Theodore Roosevelt

Theodore Roosevelt’s upbringing and early career prepared him to become a dynamic leader for the Progressive agenda.

From an early age, Roosevelt had a keen interest in nature, particularly in birds and other animals. After the tragic death of his first wife and his mother (both of whom passed away on the same day), Roosevelt traveled west and, for a brief time, ran a cattle ranch in the Dakota badlands. In the early 1890s, he re-entered public life as the New York City Police Commissioner.

did you know
As commissioner, Roosevelt learned about the problems plaguing urban America. It was at this time that he met Jacob Riis.

After serving as President McKinley’s Assistant Secretary of the Navy, Roosevelt became famous for leading the Rough Riders cavalry regiment during the War of 1898.

Theodore Roosevelt’s volunteer cavalry unit, which fought in Cuba during the War of 1898

After returning from the war, Roosevelt was elected Governor of New York and, to the consternation of traditional party operatives like Mark Hanna, became a rising star in the Republican Party. In an attempt to derail his ascension, Hanna and other Republican leaders nominated Roosevelt for Vice President — long considered a dead-end in politics — during the 1900 election campaign. However, in September 1901, an assassin killed President McKinley at the Pan-American Exposition in Buffalo, New York. Hanna lamented, “Now look! That damned cowboy is now President!” 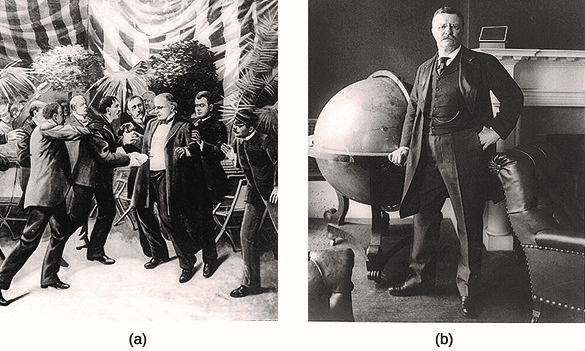 Initially, Roosevelt moved cautiously with respect to his reformist agenda while completing McKinley’s term. His first message to Congress included only one Progressive goal for his Presidency: to eliminate business trusts and holding companies.

The Sherman Antitrust Act had seldom been enforced during the first decade of its existence. In 1902, Roosevelt began his first antitrust suit under the Act by prosecuting the Northern Securities Company for unfair business practices. The suit progressed through the judicial system, all the way to the U.S. Supreme Court. In 1904, the Court affirmed the lower court's ruling to break up the Northern Securities Company in a five-to-four vote.

Although the Supreme Court’s decision in the Northern Securities case earned Roosevelt a nickname — “the Trustbuster” — he did not consider all business combinations as dangerous to public welfare. As President, Roosevelt used his executive power and influence to distinguish between “good” and “bad” trusts. 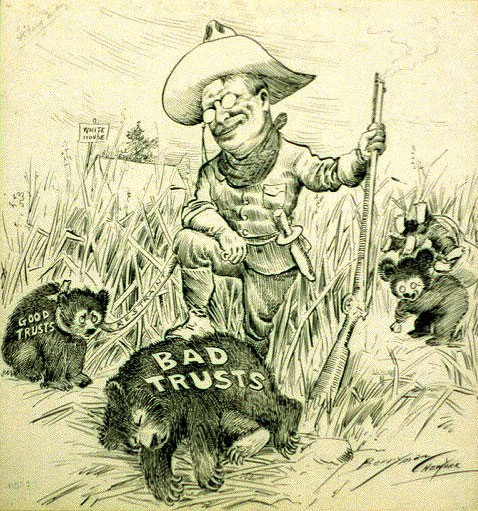 According to Roosevelt, “good trusts” used their power in the marketplace and economies of scale to deliver goods and services cheaply.

At the same time, Roosevelt used his power and influence to denounce “bad trusts” — corporations that exploited their market positions for short-term gain — and to order prosecutions by the Justice Department.

Roosevelt initiated over two dozen successful anti-trust suits, more than any President before him.

4. Roosevelt and the Square Deal

In 1904, Roosevelt was elected President for the first time, receiving an overwhelming 57 percent of the vote. He immediately began working to enact his version of the Progressive agenda, which he called the Square Deal.

Theodore Roosevelt’s name for the involved, hands-on government he felt the country needed

Roosevelt described the Square Deal in a September 1903 speech:

think about it
According to Roosevelt, who benefits from receiving “a square deal” and why?

In Roosevelt's vision, the federal government would use its authority to build a society in which hard-working members of all classes — whether urban workers, rural farmers, or industrial capitalists — would succeed together.

4a. Control of Corporations

To realize his vision, Roosevelt continued to use federal power to regulate corporations, most notably by signing the Elkins Act of 1903 and the Hepburn Act of 1906. These Acts increased the Interstate Commerce Commission's power to regulate railroad prices and practices. They also extended the Commission’s authority to include the regulation of interstate transportation on bridges, ferries, and oil pipelines.

Early in his second term, Roosevelt read Upton Sinclair’s 1905 novel about the meatpacking industry, The Jungle. It describes the deplorable conditions in which workers processed meats for American consumers. The results of government investigations of the industry confirmed Sinclair's descriptions. Alarmed by these revelations, and in response to growing public disgust, Roosevelt used his executive power to promote the passage of legislation that protected consumers. He strongly supported two laws in particular: the Meat Inspection Act (1906) and the Pure Food and Drug Act (1906).

Established a system of government inspection for meat products, including the grading of meat based on its quality

Required labels on all food and medicine products to clearly state the ingredients; prohibited the inclusion of dangerous additives in food and drug products

did you know
For Upton Sinclair, laws like the Meat Inspection and Pure Food and Drug Acts were a disappointment. He wrote The Jungle to draw attention to the plight of immigrant workers in Chicago’s slaughterhouses, not the poor quality of the meat they produced. He concluded that he had “aimed at the public’s heart, and by accident I hit it in the stomach”.

The third key element of the Square Deal was conservation, including federal regulation of wildlife and natural resources on public lands. Roosevelt’s most notable achievements in this area were accomplished in 1905 when he appointed Gifford Pinchot as the first chief of a newly-created U.S. Forest Service. The Forest Service hired experts in forestry and other fields to administer and oversee the private use of timber, grass, and other natural resources in western national forests.

With assistance from the Antiquities Act (1906), Roosevelt used his executive power to protect cultural heritage sites, areas of environmental beauty, and habitats for birds and other wildlife.

Enabled the president to declare land “of historic or scientific interest” as national monuments, protected and maintained by the federal government 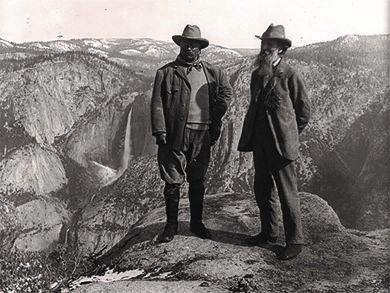 Roosevelt used his executive authority to create or enlarge 150 national forests, and to create 18 national monuments under the Antiquities Act, including Grand Canyon National Monument (which was later designated a National Park).

summary
Although many of the reform organizations associated with Progressivism emerged at the grassroots level, the movement gained a supporter in the White House when Theodore Roosevelt was elected President. His activist administration (particularly in business regulation, consumer protection, and conservation) transformed the Presidency for the 20th century. Moreover, his insistence on a Square Deal for all Americans rallied Progressives, who believed that government should use its power to build a society in which all hardworking citizens could succeed. By 1908, Roosevelt had launched a Progressive agenda that would be difficult for his successors to match.

enabled the president to declare lands “of historic or scientific interest” as national monuments to be administered by the federal government.

established a system of government inspection for meat products, including grading the meat based on its quality.

required labels on all food and medicine products to clearly state the materials in each product; prohibited the inclusion of any dangerous additives in food and drug products.

Theodore Roosevelt’s volunteer cavalry unit, which fought in Cuba during the War of 1898.

sought to restrict the creation of monopolies or other unfair business combinations that restrained freedom of trade.

Theodore Roosevelt’s name for the kind of involved, hands-on government he felt the country needed.

a central corporate entity that controls the operations of multiple companies by holding the majority of stock for each enterprise.

a social group that included managers, salesmen, and other salaried individuals and their families, who were better educated and compensated than the working class.

philosophy espousing that government should play an active role in protecting individual rights and social well-being.

investigative journalists and authors who wrote about social ills from child labor to the corrupt practices of big businesses, and urged the public to take action.

a broad movement between 1890 and 1919 that sought 1896 and 1916 led by white, middle-class professionals for legal, scientific, managerial, and institutional solutions to the ills of urbanization, industrialization, and corruption.

an early social reform movement, largely spearheaded by women, which sought to offer a variety of social services to help the urban working poor.

the belief that churches should be as concerned about the conditions of people in the secular world as they were with their afterlife.

a legal arrangement where a small group of trustees have legal ownership of a business that they operate for the benefit of other investors.

Danish immigrant and muckraking journalist whose book, How the Other Half Lives, documented scenes of urban life and poverty to generate support for progressive reforms.

progressive reformer who led the settlement house movement in the United States and founded Hull House in Chicago.

president from 1901-1909 who led a series of progressive reforms at the federal level designed to curb the power of trusts, increase consumer protections, and advance conservation of public lands through his Square Deal.

Muckraking journalist and novelist whose 1905 book The Jungle exposed deplorable working conditions and sanitation in the meatpacking industry and led to the Meat Inspection Act (1906) and the Pure Food and Drug Act (1906).

Christian theologian and Baptist pastor in New York who advocated for the social gospel and led a grassroots movement of progressive reformers who sought to remake American society according to Jesus’ teachings.