Think About It: How Do Historians View the Constitutional Convention?

Recognize elements of the ongoing historical debate over the Constitutional Convention.

300 Institutions have accepted or given pre-approval for credit transfer.

Tutorial
what's covered
When the delegates to the Constitutional Convention assembled in Philadelphia in 1787, they were determined to write a governing document that resolved the perceived weaknesses of the Articles of Confederation. The fundamental challenge involved with writing the Constitution lay in developing a national government that embraced the democratic principles of the American Revolution, while simultaneously curbing disorder and any challenges to the economic interests among revolutionary leaders.

Our examination of how historians have viewed the Constitution breaks down as follows:

1. What is Historiography? A Refresher

Recall that the term historiography has been used to refer to the study of historical writing, or the history of history.

Just like historians study change over time, historians’ interpretations of past events have changed over time. Recall how some historians have approached the history of the American Revolution:

Informed by the writings of Bancroft, Becker, Beard, and more recent interpretations by social historians and other scholars, historians continue to debate over the history of the American Revolution. Such debate includes whether the Constitutional Convention (and the U.S. Constitution itself) was a conservative reaction to the American Revolution or represented a revolutionary moment in its own right.

This conversation is diverse and ongoing. However, for the purposes of this tutorial, we can divide the debate into two camps: 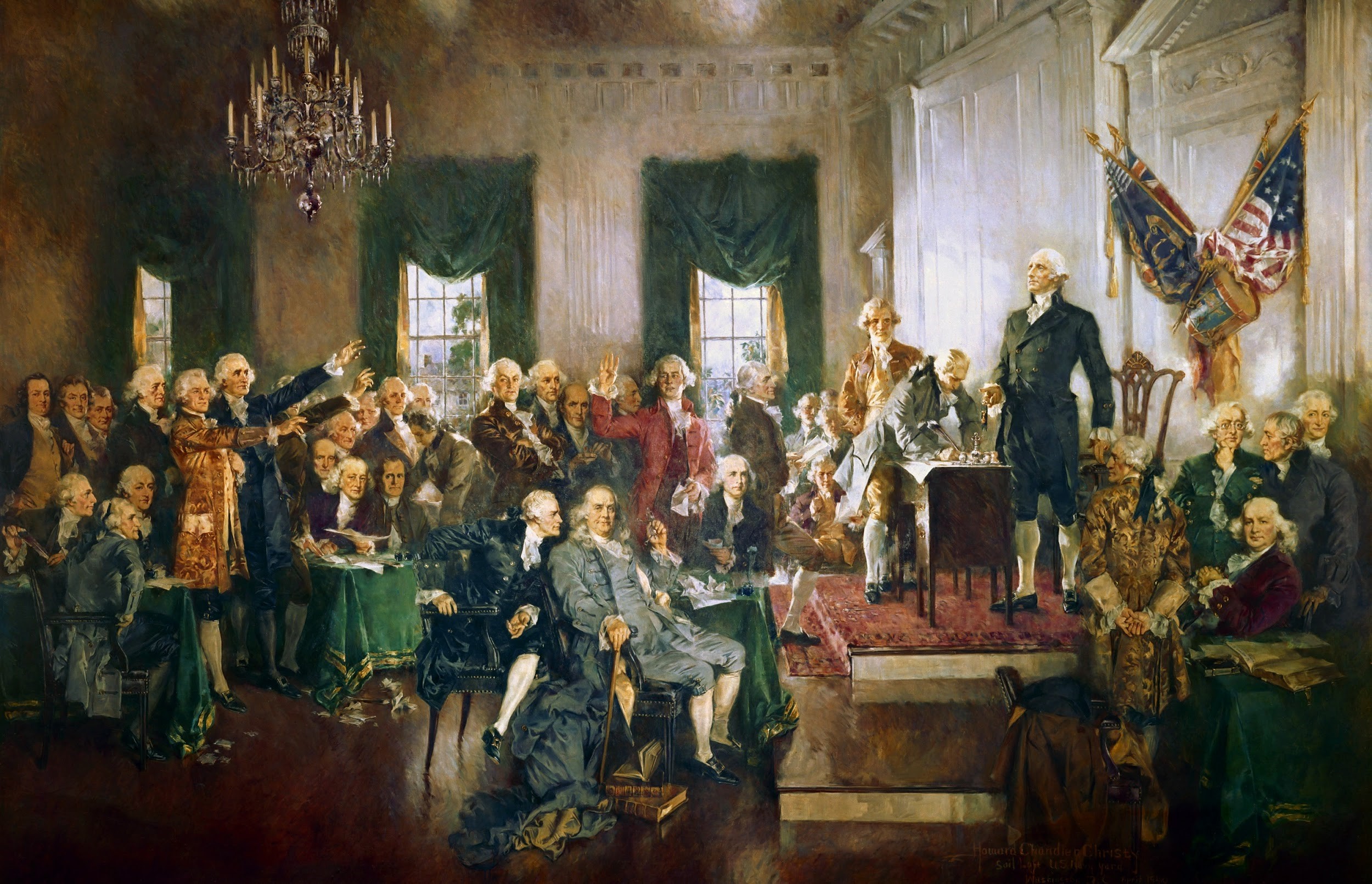 2. The Constitution as an Ongoing Revolution

In his book The Creation of the American Republic, 1776-1787, historian Gordon S. Wood suggests that the writing of the U.S. Constitution represented “both a progressive attempt to salvage the [American] Revolution in the face of its imminent failure and a reactionary effort to restrain its excesses.”

In other words, Wood suggests that the delegates to the Constitutional Convention, all of whom had participated in prior revolutionary activities to facilitate the break from Great Britain, continued to act as revolutionaries during the Convention. They sought to preserve American independence and the ideal of republicanism in a government that overcame the weaknesses of the Articles of Confederation and the various state constitutions. In their efforts, the delegates wrote a revolutionary and modern document that created a national republic, one in which an executive branch, a bicameral legislature (the House of Representatives and the Senate) and the judiciary oversaw the various interests within American society.

Thus, in reaction to the weaknesses of the Articles and various state constitutions, convention delegates created a new, revolutionary document that strengthened the national government and did not infringe upon individual liberty.

In The Federalist No. 51, James Madison (1787) insisted upon the need to create a government that, on the one hand, recognized the democratic impulses of the American Revolution and, on the other hand, protected government from the people:

think about it
According to Madison, what is the "great difficulty" in creating a government and why does such a difficulty exist?

According to Madison, men were not angels. Rather, they were motivated by self-interest and ambition. Inevitably, these interests formed political factions that clashed with each other, and one faction might consolidate power at the expense of all others if left to their own devices. Under the system of checks and balances written into the three branches of the federal government, however, Madison was optimistic that no single interest could establish a tyrannical majority. Thus, the Constitution could save the United States from the excesses of democracy — where the people (i.e. interests) held too much power — and monarchy — where only one person (or interest) controlled government.

For a historian such as Wood, the framework that Founders such as James Madison envisioned was revolutionary in its own right.

3. The Constitution as a Conservative Coup d’Etat

In his book The Making of the American Republic, 1763-1815, historian Paul A. Gilje takes a different view than Wood and refers to the writing of the U.S. Constitution as a “conservative coup d’etat” because it ignored the Articles of Confederation and attempted to turn back the democratic revolutions that were occurring at the local and state levels. Gilje also adds an economic component to this interpretation, noting that, “The Constitution was also crucial to subsequent American capitalist development. Limiting the multiplicity and mutability of law, while creating a national umbrella for all business, [the Constitution] encouraged investment and economic development.”

In other words, Gilje suggests that the delegates to the Constitutional Convention, many of whom were among the economic elite within the United States, sought to create a more stable national government that would facilitate business, investment, and economic development in the nation. To make this argument, Gilje highlights the frustrations among many convention delegates toward the inability of the Articles of Confederation to solve the nation’s economic and financial problems, particularly those associated with taxation and the national debt.

“That the defects, upon a closer examination, may be found greater and more numerous, than even these acts imply, is at least so far probable, from the embarrassments which characterize the present State of our national affairs, foreign and domestic, as may reasonably be supposed to merit a deliberate and candid discussion, in some mode, which will unite the Sentiments and Council's of all the States.”

Hamilton’s report then proposed the Constitutional Convention, which would:

“...devise such further provisions as shall appear to them necessary to render the constitution of the Federal Government adequate to the exigencies of the Union; and to report such an Act for that purpose to the United States in Congress assembled, as when agreed to, by them, and afterwards confirmed by the Legislatures of every State, will effectually provide for the same.”

think about it
Based on the evidence provided, do you believe Hamilton saw the Articles of Confederation as an effective form of government or a failure? How did you reach your conclusion?

The fact that the Congress responded to Hamilton’s report by insisting that any subsequent convention focus only on revising the Articles of Confederation suggests that the majority of members in Congress did not desire the creation of a new national government. That delegates to the Constitutional Convention did so anyways lends some credence to Gilje’s interpretation.

brainstorm
Do you think Gordon Wood could develop a counter argument to Paul Gilje’s interpretation of the Constitutional Convention as a conservative coup d’etat by using the above primary source material? If so, what would such a counter argument look like?

big idea
There are many ways that historians can interpret the Constitutional Convention and the U.S. Constitution. Such interpretations often depend on the lenses and contexts that historians apply to their primary sources. By framing the Constitution as an ongoing revolution, Wood appears to examine primary sources within the context of republicanism, or the social and political philosophy that James Madison and many other Founders hoped to implement in the United States. Meanwhile, by interpreting the Constitution as a conservative coup d’etat, one might suggest that Gilje expands upon Charles Beard’s original interpretation. Much like Beard, Gilje interprets Founders, such as Alexander Hamilton, as ambitious individuals who sought to stabilize the United States for economic development. Finding the Articles of Confederation lacking, the Founders took matters into their own hands.

What cannot be disputed is that the delegates to the Constitutional Convention understood the significance of their actions. Such evidence is clear in a letter from the convention delegates (signed by George Washington) to Congress on September 17, 1787, announcing that their work was complete.

Having just read about competing interpretations of the Constitutional Convention, read the delegates’ letter to Congress, which is provided below. While reading, keep the above interpretations by Gordon Wood and Paul Gilje in mind. Do you see evidence of an ongoing revolution? Of a conservative coup d’etat? Of both?

Letter from the Convention Delegates to Congress, 1787

We have now the honor to submit to the consideration of the United States in Congress assembled, that Constitution which has appeared to us the most adviseable.

The friends of our country have long seen and desired, that the power of making war, peace, and treaties, that of levying money and regulating commerce, and the correspondent executive and judicial authorities should be fully and effectually vested in the general government of the Union: but the impropriety of delegating such extensive trust to one body of men is evident — hence results the necessity of a different organization.

It is obviously impracticable in the federal government of these states, to secure all rights of independent sovereignty to each, and yet provide for the interest and safety of all: individuals entering into society, must give up a share of liberty to preserve the rest. The magnitude of the sacrifice must depend as well on situation and circumstance, as on the object to be obtained. It is at all times difficult to draw with precision the line between those rights which must be surrendered, and those which may be reserved; and on the present occasion this difficulty was encreased by a difference among the several states as to their situation, extent, habits, and particular interests.

In all our deliberations on this subject we kept steadily in our view, that which appears to us the greatest interest of every true American, the consolidation of our Union, in which is involved our prosperity, felicity, safety, perhaps our national existence. This important consideration, seriously and deeply impressed on our minds, led each state in the Convention to be less rigid on points of inferior magnitude, than might have been otherwise expected; and thus the Constitution, which we now present, is the result of a spirit of amity, and of that mutual deference and concession which the peculiarity of our political situation rendered indispensible.

That it will meet the full and entire approbation of every state is not perhaps to be expected; but each will doubtless consider, that had her interest been alone consulted, the consequences might have been particularly disagreeable or injurious to others; that it is liable to as few exceptions as could reasonably have been expected, we hope and believe; that it may promote the lasting welfare of that country so dear to us all, and secure her freedom and happiness, is our most ardent wish.

With great respect, We have the honor to be, Sir,

Your Excellency's most obedient and humble servants,

brainstorm
Why did the delegates insist, “Individuals entering into society, must give up a share of liberty to preserve the rest?” How might Gordon Wood, Paul Gilje, or any other historian mentioned in this tutorial interpret this phrase?

summary
Regardless of whether you agree with Wood’s interpretation, Gilje’s interpretation, or develop an interpretation of your own, one thing is clear: the authors of the U.S. Constitution strove to address important political, social, and economic issues. Furthermore, they believed that the Articles of Confederation left many of these issues unresolved. Therefore, convention delegates worked to develop a governing structure with a sufficient system of checks and balances that saved the American republic from democratic excess. By strengthening the national government, the Constitution also contributed to an economic climate more favorable to investment and development. The fact that, for over 200 years, the U.S. Constitution continues to provide a framework for American democracy and the economy, is a testament to the document’s significance.