Or
Close Popup
+
Previous
1.4 The First Settlers
Next
2.1 Maritime Exploration
Think About It: What is History?
Settling the Americas: 10,000BCE - 1700
0
of 0 possible points

Think About It: What is History?

Recognize different ways of learning about the past.

Tutorial
what's covered
In this tutorial, we will continue to ask the question: What is history? Recall that history is defined as the study of the past and we have examined ways in which historians use primary or secondary documents to research and interpret the past. In this tutorial, we will review how historians have approached the pre-Columbian past in America, a past that exists mostly without a written record.

Thus far in this U.S. History course, we have asked quite a few questions about history. The questions can come across as simple, but as we have discussed the answers are not always clear. So far, we have asked:

But now that we’ve taken a look at the history of some of the first settlers of the Americas, we have to ask: how do these questions apply to real people, places, or things that have existed in the past?

That question may seem relatively straightforward, but finding an answer can be more complicated than you think. For example, we know that President Richard Nixon resigned from office on August 9, 1974. We know this because: (a) we have primary source evidence from archived video footage, (b) there is a paper trail, and (c) there are people that can recall the events.

But what happens when there is no direct evidence of an event taking place? The vast majority of American history that occurred prior to 1492 took place, in what historians call, a pre-historical context. Prehistory refers to a period of time that occurred before written records existed.

A period of time that occurred before written records existed.

Recall that the Mayan civilization was one of the rare pre-Columbian societies that used a written language. But history occurred outside of Mesoamerican Mayan cities and historical narratives from prehistoric societies have been created.

When studying the histories of prehistoric societies, historians often wear different professional and academic hats. One of these hats is that of the archeologist.

The study of past human events, especially prehistoric, using evidence found in excavation.

Archeologists have been able to piece together stories about America’s past by finding literal pieces from the past. Archeologists dig into the earth to find evidence of human activities and construct narratives using the evidence they find. For example, historians knew very little about the Native American peoples that lived along the Mississippi Valley until archaeologists began excavating sites around the region. 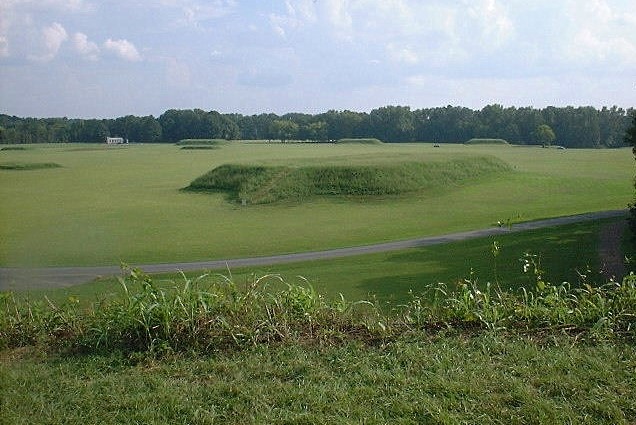 The mounds shown in this image have existed in the Mississippi Valley for thousands of years, spanning from Illinois to Alabama. Despite their long-term existence, however, little was known about these odd structures. Throughout the 19th century, they were levelled and demolished to make room for railroad lines and other physical results of westward expansionist policies.

Beginning in 1905, an archaeologist named Clarence Bloomfield Moore began excavation of one of the largest of these sites, called Moundville, in Alabama. Using the evidence he found in the earth (e.g., pottery, figurines, etc.), Moore was able to determine that these mounds were used to house elite social figures. He even found evidence that some mounds were used for ceremonial purposes.

An archaeological site in Alabama, important historical site of the Mississippian culture of pre-Columbian America.

With the help of archaeologists like Moore, we have been able to construct a more concrete narrative of the peoples who lived in these mounds. We know that these Mississippian cultures: (a) were related to the Hopewell peoples that lived further north, (b) prospered between 500 and 900 C.E., and (c) maintained extensive trade relations between numerous other Native American societies (e.g., as evidenced by shell beads from far seaboard societies that have been found).

Another example of prehistoric narratives developed in the American past can be found in the cultural practices of the Tohono O’odham people. European settlers in the New World knew very little of these people and often lumped their histories together with that of larger, more-well-known, Native American cultures. For example, the Spanish missionaries and conquistadors often perceived the Tohono O’odham similarly to the Apaches who were their neighbors in the Sonoma region (i.e., Arizona and Northern Mexico). Much of this was attributable to European disinterest in indigenous identity.

The Tohono O’odham people also had a way of retelling their own history that differed from the Europeans. Primarily, they used what have been called calendar sticks.

Ribs from the saguaro plant that the Tohono O’odham people marked to remember important events. 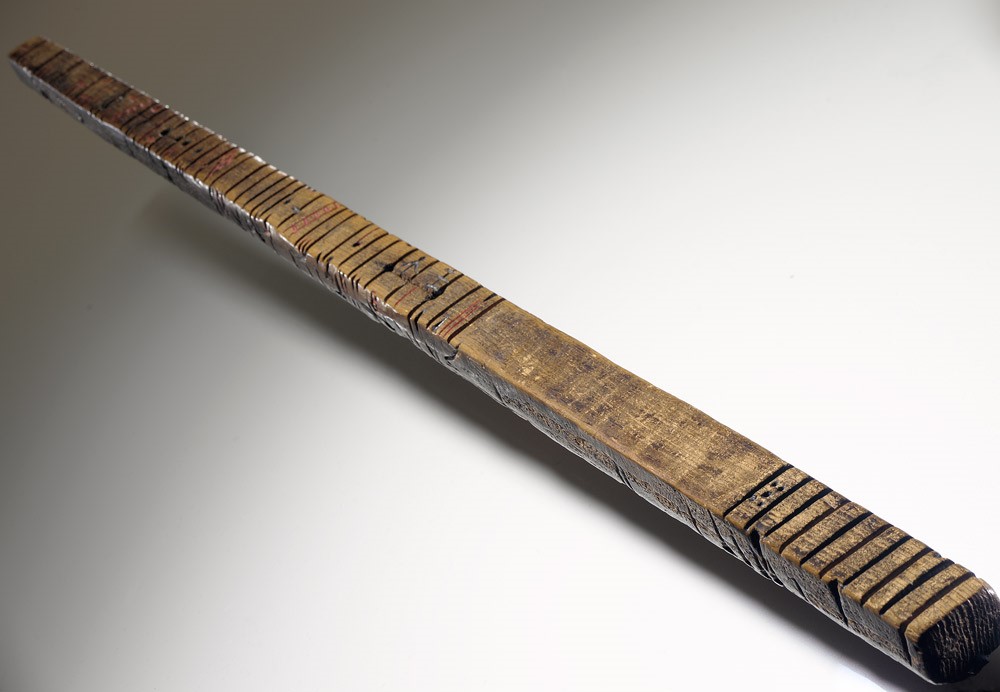 Historians view these calendar sticks as essential primary source evidence in the recreation of the Native American past in North America. However, this primary source cannot be interpreted by the historian alone. In Tohono O’odham tradition, a storyteller must remember the marks made on their people's calendar stick and retell the history.

Using these calendar sticks and with the help of Tohono O’odham storytellers, historians have been able to create a much clearer vision of their past. For example, we now know that the Tohono O’odham lived in the Sonoran region for several hundred years (the actual dates are not fully known) and they had a tumultuous existence with the more populous Apache peoples. Oral history approaches, like these, have allowed historians to learn more about Native American experiences, philosophies, and important events than many of the other primary sources can provide.

The use of interviews and first-person perspectives in the creation of history.

The Tohono O’odham were generally an agriculturally based society. This was known by the neighboring Apaches who would raid their communities when they ran out of food. The Apaches knew the Tohono O’odham would have food stored away. We know this because Tohono O’odham storytellers remembered these events and marked them on calendar sticks.

brainstorm
Do you see any problems when it comes to using primary sources like these? How would you overcome any problems that you might find in using these to create historical narratives about the pre-Columbian past in America?

Another option when taking a look at the pre-Columbian past of America is to examine evidence Europeans created after setting foot in the Americas. This may come across as a little backwards and you would be right to think that. There are a couple of tricky issues when using this kind of primary source evidence, but they can be used to look backwards into the past. 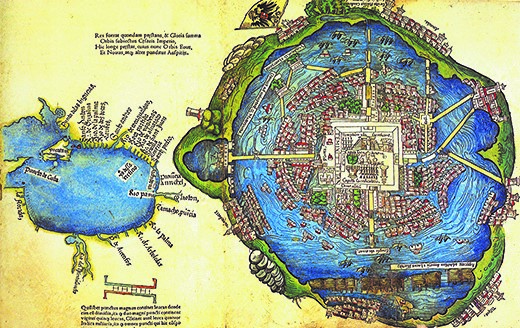 Take a look at this map of the Aztec island city of Tenochtitlán as an example. This map was not drawn by the indigenous Aztec people. Instead it was created by the Spanish: the same people who would overtake the Aztec empire as the most dominant power in the region. This idea about dominance can actually be extracted from this primary source map, even though it seems like a straightforward rendition of the way that the Aztec city looked.

We can learn things about Aztec imperial dominance by the city itself. When looking at this map, we can see that the city of Tenochtitlán was massive. So massive, in fact, that every single other European city was dwarfed by its size. You can imagine that a city so large could only be controlled through imperial rule, similar to how Europeans controlled their major cities. But Tenochtitlán was developed well before any European stepped foot in Mesoamerica.

One thing that can be noted from this city map is that there are causeways that cut into the city center. By looking at this map - and taking into consideration the known fact that the Aztecs ran an empire - historians can conclude that these were used as access routes to pay tribute. Subjugated tribes and peoples from outside the city were able to bring their goods into the city walls and they used these access routes as a way to appease the empire. This also tells a historian that the concept of imperial domination was not uniquely European. All of this can actually be derived from this single primary source, using a well-trained historian’s eye.

There is a significant issue with sources like these, however. We must always remember to identify the perspective and bias in a primary source. This is especially true when using a European source to understand the pre-Columbian past. Europeans, like the Spaniards, typically looked unfavorably upon the local peoples and their sources often reflect this.

think about it
Can you think of a historical site where researchers used archaeological evidence, oral history, and European documents to create a narrative about the prehistoric past in America?

summary
The historian’s craft is not always an easy one. This is especially true when it comes to the prehistoric societies that dominated pre-Columbian America. As a result, historians have had to come up with unique and varying ways to interpret the American past prior to European contact. These ways have included: (a) using archaeological evidence from the remains of these past events and peoples, (b) using oral histories and the Native American perspective when considering past events, and (c) using evidence from European sources (with a keen eye) to construct narratives of the past.