Or
Close Popup
+
Previous
1.6 American Slavery from an African Perspective
Next
2.1 The Aftermath of the French and Indian War
Think About it: What was the Importance of Slavery to the Colonies?
The Road to Revolution: 1600 - 1783
0
of 0 possible points

Think About it: What was the Importance of Slavery to the Colonies?

(more)
See More
Tutorial
what's covered
This tutorial examines slavery in the American colonies in the mid-18th century. It addresses the similarities and differences in slavery in the northern and southern colonies. By incorporating a runaway slave advertisement from a colonial Virginia newspaper, this tutorial enables students to examine the variety of relationships and barriers that racial slavery created in the American colonies.

The importance of slavery to the colonies is addressed in three parts:

1. The Northern Colonies: A Society with Slaves

Racial slavery was a critical component of the colonial American economy. Commerce in much of the Atlantic World consisted primarily of slaves, crops produced by slaves, and goods destined for slave societies. Slaves comprised a significant proportion of the colonial population.

British North America imported between 400,000 and 600,000 African slaves during the colonial period. By 1770, around one-fifth of the approximately 2.3 million people living in British North America (excluding American Indians) were of African descent. Slavery was legal in every American colony, and it influenced every aspect of colonial society. Economic priorities, demography, and cultures contributed to the creation of distinct regional variants of slavery within colonial America. However, no matter where racial slavery existed, freedom in colonial society was determined along lines of color. Whenever African slaves attempted to assert their liberty, white colonists responded quickly.

Slavery was not as widespread in northern colonies because of the absence of cash crops like tobacco. Nevertheless, slavery was legal and practiced in the region, and the northern colonies played a key role in the maintenance of the institution elsewhere.

The transatlantic slave trade was central to New England’s maritime economy. All of the region’s major port cities traded with ships that were active in transporting slaves. For example, Newport, Rhode Island served as a port for as many as 150 ships active in the slave trade by 1740. New England also provided food and manufactured goods to plantations in the southern colonies and the West Indies.

Slavery was widespread in the cities of the northern and middle colonies. By the early 18th century, about three-quarters of the colonial urban elite owned at least one slave. Philadelphia and New York City were key points where transatlantic slave ships disembarked with human cargo. By 1746, one-fifth of the inhabitants of New York City were slaves.

Slaves who lived in northern colonial cities engaged in work across all economic sectors. In Boston, New York City, and Philadelphia, many slaves were sailors and dockworkers. Other urban slaves worked in domestic service. Still others earned wages as artisans.

Although the transatlantic slave trade was a vital component of the economy of New York City and other northern cities during the 18th century, the practice of owning slaves in northern urban areas gradually declined as populations grew and the contracts of indentured servants expired. Facing a surplus of labor and continued demand for their products, many northern urban employers preferred to hire and fire workers at will, rather than make the longer-term investments associated with owning slaves.

Where African slaves constituted a smaller part of the overall population and seemed to pose little threat to the white population, laws regulating slavery were less harsh than those in the south.

In New England,slave marriages were recognized by law and slaves could bring suit in court, testify against whites, and own property and pass it on to their children. These rights did not exist in the southern colonies.

Taken together, these few recognized rights did not equal racial equality, but such laws, combined with the kinds of work that many slaves did in northern cities, produced a form of racial slavery that was different from that which occurred on plantations in the Chesapeake region or in the Carolinas.

2. The Southern Colonies: A Slave Society

The overwhelming majority of African slaves in British North America lived in the southern colonies, all of which had established cash-crop, plantation economies based on slave labor by the mid-18th century.

Tobacco cultivation was prevalent in Virginia and the Chesapeake Bay region. By the 1750s, the socioeconomic order that tobacco-growing elites initiated in the wake of Bacon’s Rebellion was firmly in place. Under the gang system of labor, groups of African slaves worked from sunup to sundown on large tobacco plantations, under the careful watch of white overseers who used intimidation and force to compel maximum production. The work was highly-regimented and repetitive, and continued throughout the growing season.

At harvest time, overseers drove the slaves to their physical limits to maximize the harvest. Nevertheless, the gang system of labor provided opportunities for the slaves to cooperate with each other and resist their masters.

Slaves who were capable of working faster in the fields often set a slower pace to protect those who could not work as quickly. 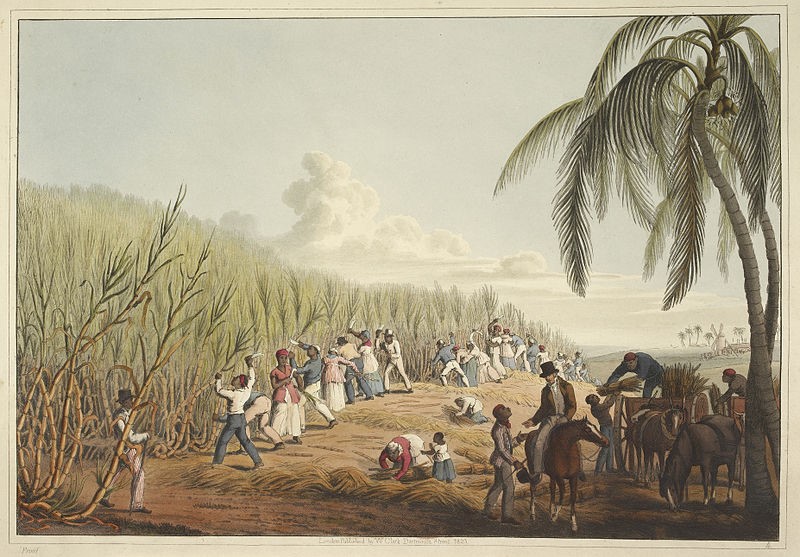 Preferred method of labor organization on tobacco plantations in the Chesapeake, where large groups of African slaves worked in the fields under the close watch of an overseer.

A different slave system emerged in South Carolina and Georgia as a result of rice cultivation. Rice was also grown in West Africa and, as a result, rice planters in South Carolina and Georgia requested and purchased African slaves who were familiar with the process. These slaves taught the colonists how to grow a crop that helped to build the wealthiest planter class in the colonies.

Rice cultivation required the draining of swamps and the building of extensive irrigation systems. The local climate fostered diseases such as malaria because mosquitoes lived and reproduced in the irrigated rice fields. Many plantation owners lived in Charles Town or Savannah to avoid disease. The slaves, however, lived on the plantation and, as a result, experienced less direct oversight than slaves on tobacco plantations in the Chesapeake.

did you know
African slaves possessed a genetic trait that made them less susceptible to malaria, but the same trait contributed to higher risks for sickle cell anemia. Immunity to malaria also reinforced the planters’ racist belief that Africans were best suited for labor in tropical climates.

Rice plantations in South Carolina and Georgia employed the task system of labor. Slaves received specific tasks to complete during the day. Once their work was done, slaves had free time for leisure, or to cultivate their own crops. As a result, the task system gave slaves opportunities to sustain themselves. For example, some slaves hunted and fished to supplement the food produced in their agricultural plots.

The immense size of the rice plantations and the amount of labor required to cultivate the plant contributed to significant growth in the African slave population, and enabled the slaves to gain a degree of cultural autonomy under the task system. Many slaves in South Carolina and Georgia retained elements of their native languages and continued traditional customs like basket weaving and others. 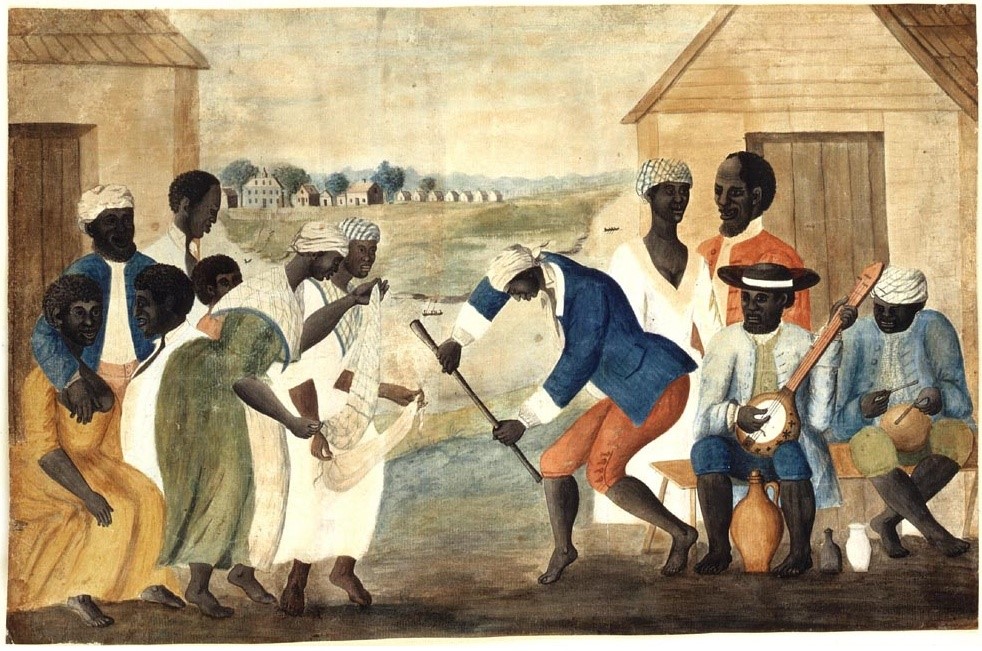 Preferred method of labor organization on rice plantations in South Carolina and Georgia, in which African slaves received specific tasks to complete during the day, and experienced little oversight after their work was completed.

Regardless of where one lived in the southern colonies, racial slavery provided the foundation for a plantation-owning elite that dominated regional politics. Merchants who handled the sale of southern cash crops, along with lawyers who defended the interests of plantation owners, reinforced their influence and power. Wealth and land ownership was concentrated among a handful of families. Below them on the social pyramid were lesser planters and landowning, independent farmers. Convicts, indentured servants, tenant farmers (who comprised half of all white colonial households by 1770) and, finally, black slaves, occupied the bottom levels.

The most important relationship within the hierarchy of racial slavery in the American colonies was the one between slave owners and slaves. Slave owners believed that one of the chief purposes of government was to maintain this relationship, and to protect it at all costs. They went to great lengths to preserve their position over slaves and the social order that developed around this relationship.

Race was the important line of division within colonial society, as white colonists increasingly considered slaves and even free blacks as potentially dangerous individuals. Colonial legal codes denied slaves or free blacks the right to bear arms. Violence and intimidation were also integral to maintaining order. For example, although slave owners prided themselves on their concern for the well-being of their slaves, they noted in their diaries that slaves should be whipped severely if any transgressions occurred. Planters and colonial governments sponsored slave patrols, and colluded to capture runaway slaves with assistance from other white colonists.

Runaway slave advertisements that slave owners published in the Virginia Gazette (Williamsburg) during the mid-18th century reflected a colonial social order defined by racial slavery, as in the following example:

did you know
A pistole was a Spanish gold coin also known as a doubloon. The colonies were not allowed to coin their own money, which meant that foreign coins such as the pistole became a preferred means of currency exchange in America prior to the Revolution.

The advertisement also provides evidence of slavery’s violent and coercive nature. Note the "large Scar" over the "right Eye" of James, which could have come from a work accident — or from an overseer’s whip. Also note the "Mulatto Boy" alongside a woman (possibly his mother), which may indicate sexual violence against a slave woman by a white planter. The advertisement provides evidence that slaves — in this case two brothers, a man and a woman, and a woman and child — were able to maintain relationships and communicate with each other despite the slave owners’ attempts to control their lives.

On one hand, runaway slave advertisements display the legal and social apparatus that slave owners used to control other human beings. On the other, the ads reveal that slaves attempted to undermine and escape this control.

summary
By the mid-18th century, racial slavery permeated the American colonies. Although the economy of the northern colonies was not based on cash crops, New Englanders participated in the transatlantic slave trade, and cities including New York City and Philadelphia were important centers for the sale of human beings.

The majority of African slaves lived in the southern colonies. The gang system of labor flourished on tobacco plantations in the Chesapeake, while the task system of labor was better-suited to rice plantations in South Carolina and Georgia. Regardless of which system was used, racial slavery supported a white colonial elite which went to great lengths to preserve its power. As a result of these efforts, whiteness became increasingly associated with freedom and privilege, while blackness was associated with enslavement and inferiority.

Preferred method of labor organization on tobacco plantations in the Chesapeake, where large groups of African slaves worked in the field under the close watch of an overseer

Preferred method of labor organization on rice plantations in South Carolina and Georgia, in which African slaves received specific tasks to complete during the day and experienced little oversight after their work was completed