Or
Close Popup
+
2 Tutorials that teach Time, Scale, and Impact
Take your pick:
Previous Next

Recognize the scale of impact on environmental issues.

Tutorial
what's covered
This tutorial will cover the topic of time, scale, and impact. We will discuss environmental issues in relation to their geographical scale of impact, time and duration of impact, and degree of impact.

Environmental issues can vary in their geographical scale of impact from the individual, to the local, to the regional level, and to the global level. 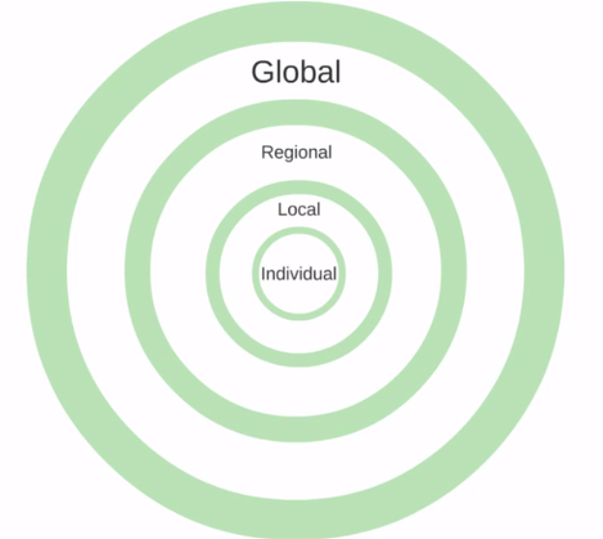 Consider the impact of environmental issues caused by a coal plant.

Individual Impact: A coal plant in a particular location might cause an employee of that plant respiratory problems from pollutants.

Local Impact: Pollution emitted to nearby waterways could impact the local water systems, and cause environmental damages and human health problems.

Environmental issues can also vary in their temporal impact.

An industrial plant could improperly manage their heavy metal waste and dump high levels into local water systems. People drinking that water might experience immediate effects such as stomach irritation and dizziness. Over time, drinking that water with heavy metals could, decades later, lead to various forms of cancer in the local population. Generations of impact could result as the heavy metals damaged local marine ecosystem so severely that fish populations wouldn't be able to recover for 50 to 150 years, which would also affect local economic fisheries.

Not all environmental impacts are equal, and the degree of impact will vary depending on the type of ecosystem being affected. This is because certain ecosystems provide more or less ecosystem services, or are more vulnerable to human impacts than others.

Wetlands provide a large amount of ecosystem services such as biodiversity and natural water treatment. They are also more vulnerable to impacts.

Human population density is also a factor. A more densely populated area impacted by environmental damages is more significant than a less populated area because more people are involved.

Consider accidental poisoning of water sources for New York City versus Poultney in Vermont. Which would be considered more impactful?

Consider a drought in India versus the United States. The U.S. has a much smaller population versus its economic wealth compared to India. The result is that if both countries experienced a drought of similar severity at the same time, the degree of impact would be much greater for India because it has less economic strength to draw on.

summary
Today we learned about environmental issues in relation to their geographical scale of impact, time and duration of impact, and degree of impact.