Identify the responsibilities of the U.S. Central Bank, the Federal Reserve.

Tutorial
what's covered
This tutorial will cover the U.S. central bank, which is the Federal Reserve. We will cover the Fed's creation, structure, and primary responsibilities.

1. Formation of the Federal Reserve

In the early 1900s, a central banking system was developed to standardize U.S. currency. Although this certainly helped matters, there were still issues.

In 1907, there was a major panic. You may recall that a panic is a situation where people run to the banks en masse to demand all of their money, and banks do not have enough to meet those demands.

Now, these panics are very detrimental for our macroeconomy because it reduces the confidence of people and it can be very difficult to get back on track.

This act authorized the Fed to be the sole monetary authority in the United States. It is important to understand that, unlike many central banks, the Fed is not directly controlled by our federal government.

The Federal Reserve is defined as the central banking authority for the United States with direct oversight authority for monetary policy.

2. Structure of the Federal Reserve

So, how is the Fed structured? Well, it is headed by a Federal Board of Governors, which consists of seven members who are appointed by the President and confirmed by the Senate.

hint
Although the government does not directly control the Board of Governors, there is an appointment by the President and confirmation by the Senate required. However, they are not elected like some other government officials.

Each member of the Board of Governors has a 14-year staggered term. You may be surprised by the length of this term, but as you learn about monetary policy, you will see that consistency and stability is very important. If the structure is overhauled or changed too rapidly, it can negatively impact our monetary policy. Therefore, these board members serve 14-year staggered terms.

The Chairman of the Fed is a very important person. He or she is also appointed by the President and confirmed by the Senate. This person serves a shorter term at four years, but each term is renewable. Some of our past Fed chairmen have served multiple terms, while others have not served as long.

The Federal Reserve Board of Governors, then, is defined as the seven-member governing board of the Federal Reserve. The members are nominated by the President and confirmed by the Senate to serve a 14-year staggered term.

Federal Reserve Board of Governors

The seven-member governing board of the Federal Reserve Board. The members are nominated by the President and confirmed by the Senate to serve a fourteen-year staggered term.

There are 12 Federal Reserve Districts in our country, as detailed on this map. 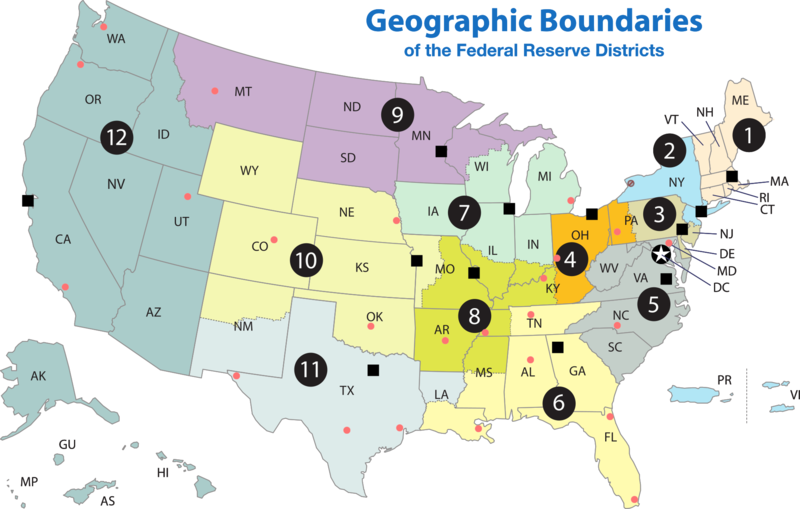 As you can see, some districts are larger in size than others, but much of the district determination is based on population and similarity of banking conditions.

think about it
Can you find the location of your Reserve District? Sometimes individual states are split up into different districts. For instance, the state of Pennsylvania is split up between Districts Three and Four.

Each District is responsible for controlling the money supply for each region. Every bill that we have actually indicates which District it originated from.

This letter on the dollar bill below is a code for what District it came from. In this case, it came from New York.

Banks can choose to either hold their reserves as vault cash at their actual bank or keep their reserves at the regional Federal Reserve District bank. In this case, the Fed makes these reserves available to banks if and when customers want to withdraw their money.

3a. Lender of Last Resort


The Federal Reserve Districts also act as a lender of last resort, in order to prevent runs and panics. Usually, if a bank has not met its daily reserve requirement-- recall that banks have to report this information daily about them--it will borrow from another member bank. When banks do this, they pay something called the fed funds rate.

However, if they need to, they absolutely can borrow from the Federal Reserve. In this case, they would pay the discount rate to do so.

hint
It is important that our Fed acts as a lender of last resort, because it engenders confidence on the part of consumers, knowing that if their bank's reserves are running low, they will not run out of money. Their money will, in fact, be there.


Another purpose of the Federal Reserve Districts is to clear checks. This is how banks record whose account gives up money and whose account receives money.

Suppose you are banking with Bank A, and you write a check to a friend who banks with Bank B, a different bank. The Fed will step in and verify that the funds are available and will transfer reserves from Bank A to reserves in Bank B. Once Bank B receives those reserves, they will give the money to your friend--the check cleared. This all happens electronically, by the way.

Lastly, let's discuss the Federal Open Market Committee or FOMC. One of the Fed's most important roles is to regulate our nation's money supply. Therefore, the FOMC makes key decisions about interest rates and the growth of the money supply in our country.

The FOMC meets about eight times a year, and its members come from the Board of Governors--if you recall, those seven people that make up the Board--and the District Reserve Bank presidents, from those 12 different Districts. They all rotate in and out of the FOMC.

So, the Federal Open Market Committee is defined as a committee within the Federal Reserve System that has responsibility and oversight of open market operations, which is the buying and selling of U.S. Treasury securities. The reason they buy and sell U.S. Treasury securities is for interest rate and money supply management, which is one of the key components of monetary policy.

The committee also sets the target for that federal funds rate that applies when banks borrow from one another.

A committee within the Federal Reserve System that has responsibility and oversight of open market operations, buying and selling of U.S. Treasury securities for the purpose of interest rate, and money supply management, one of the key components of monetary policy. The committee also sets the target for the federal funds target rate.

A committee within the Federal Reserve System that has responsibility and oversight of open market operations, buying and selling of U.S. Treasury securities for the purpose of interest rate, and money supply management, one of the key components of monetary policy. The committee also sets the target for the federal funds target rate.

Federal Reserve Board of Governors

The seven-member governing board of the Federal Reserve Board. The members are nominated by the President and confirmed by the Senate to serve a fourteen-year staggered term.