Free Professional Development
Or
Close Popup
+
1 Tutorials that teach Using Data to Identify a Relationship Between Variables
Take your pick:
Previous Next

Using Data to Identify a Relationship Between Variables

Identify the correlation coefficient for a given set of data.

Sometimes, when researchers are presented with data, they are interested in whether the data shows a cause-and-effect relationship between two variables. Often when representing how two variables may be related to one another, a scatterplot is used. Recall that scatterplots are used for interval or ratio variables.

There are variables that are related in every aspect of nature, such as the amount of exercise a person engages in and their resting heart rate. In the event that two variables are related, they are said to be correlated.

We would intuitively expect a positive association between a person’s education level and his or her income. As you can see, based upon the scatterplot and the trend line on this graph in front of you, it is. 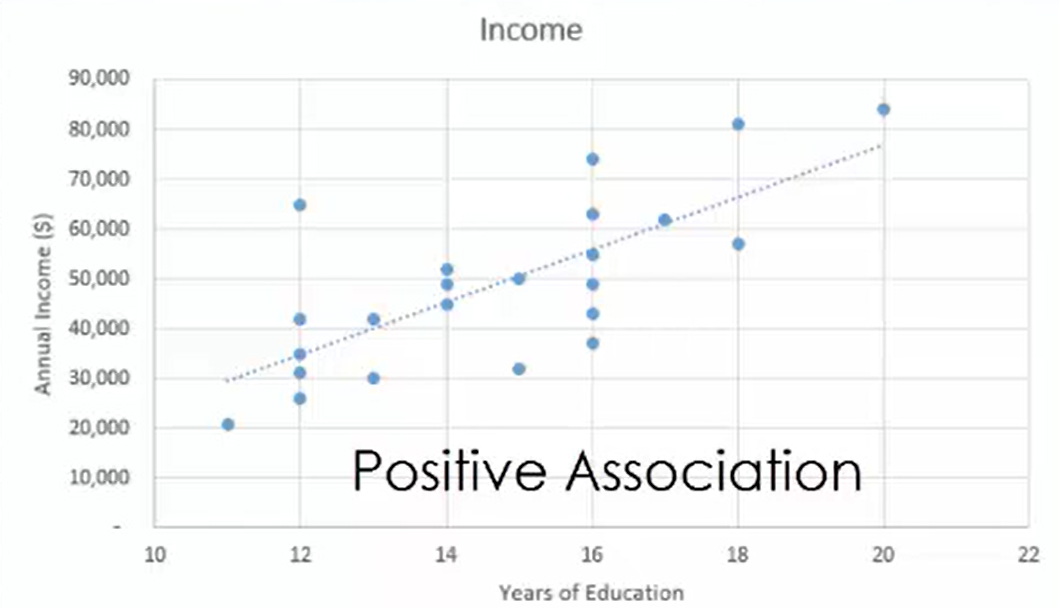 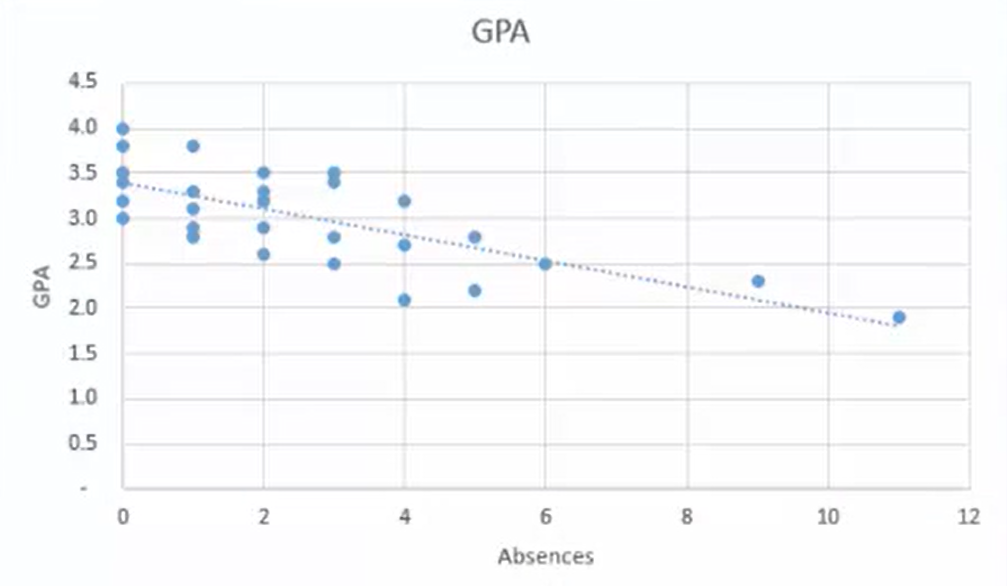 It is important to identify trends in data, because they can help establish a relationship between variables, especially when looking at them in a scatterplot. If you were to look at a scatterplot that showed a person’s age and his or her annual healthcare expenditures, you would likely get a sense that variables such as these have a positive association. This is because older people would typically have more health issues. As a result, they will probably have greater healthcare expenditures.

Suppose you compared the heights of 40 girls relative to their ages. Intuitively you would expect that to be a positive association. 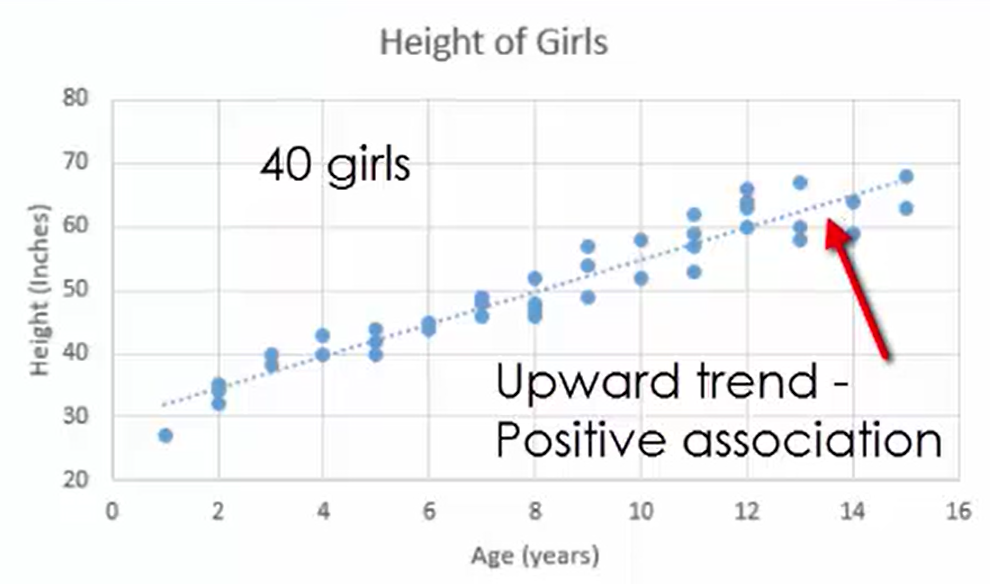 There’s an upward trend. Each data point you see here represents two different values: how old each girl is in years and her height in inches. Notice that the upper trend here follows this particular line. It’s a relatively strong trend.

Now let’s look at something that might have a negative association, such as the number of hours of television a student watches per week relative to that student’s grade point average. Notice that there’s a downward trend, as you might expect. 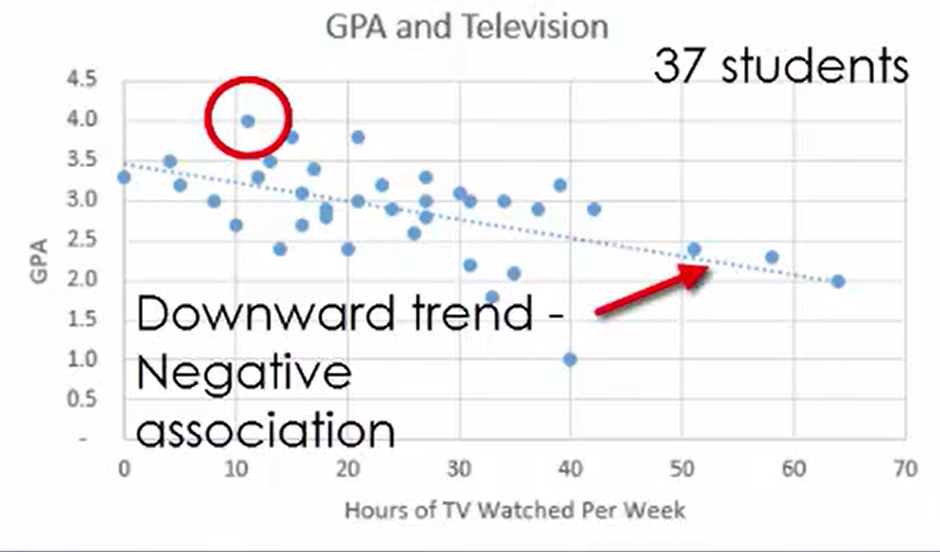 Each data point here represents two measurements: the hours of television the student watches and the student’s grade point average. You can see that this means that the more television a student watches, probably the less time he or she is studying. As a result, grades tend to go down, and it tends to follow the line you see illustrated here.

A number that indicates an upward or downward trend in the scatterplot, and also how well the trend follows a straight line

Here is a scatterplot illustrating the relationship between a person’s income and how much money he or she has saved for retirement. Notice that you’ll see the particular value listed here as the correlation coefficient. 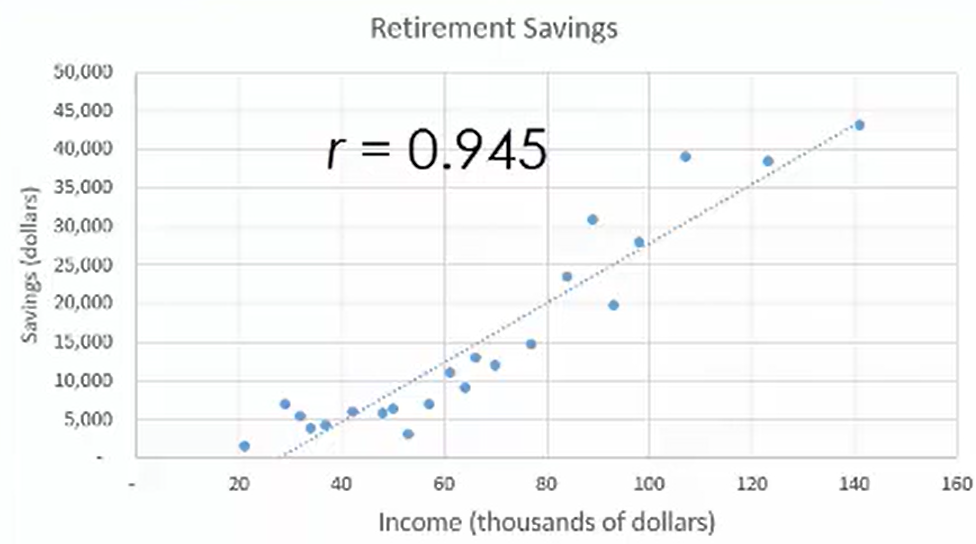 The correlation coefficient is equal to a 0.945, which is very strong, and it’s positive. The more money somebody earns, in all likelihood, the more he or she is able to save for retirement. There’s a very, very strong association between those two variables.

This scatterplot illustrates something completely different. It’s dealing with the number of hours per month that a golfer practices his or her swing relative to his or her average score. 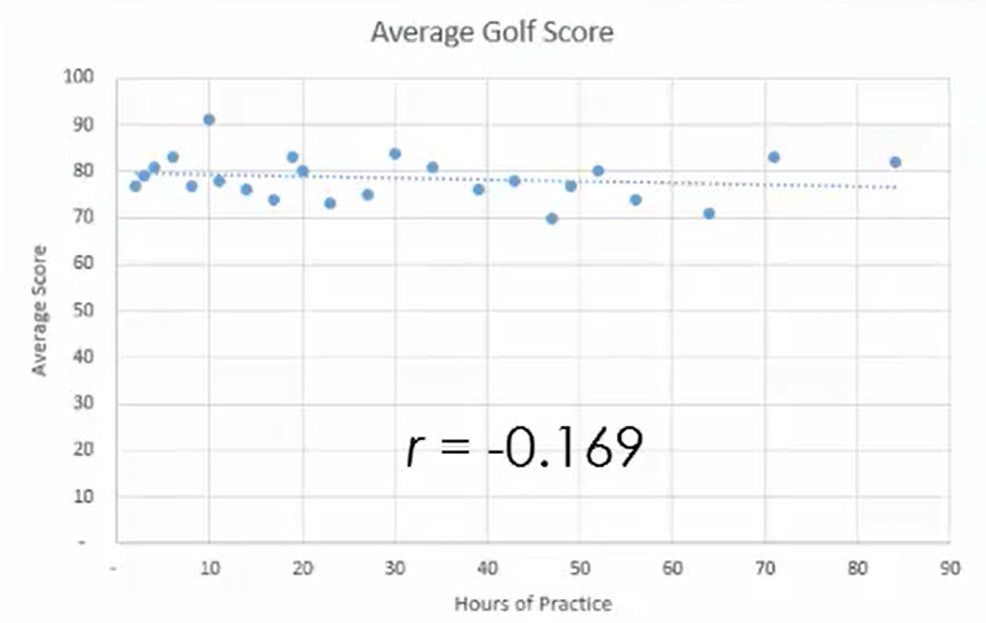 As you see with the scatterplot, there is not much of a downward association here. The correlation coefficient is equal to -0.169.

think about it
What does this this tell you?

Now look at the weight of cars and the miles per gallon that they get. You would expect this one intuitively to be a very strong negative association.

think about it
What does this mean?

This means that the variables of weight and gas mileage would be closely related. 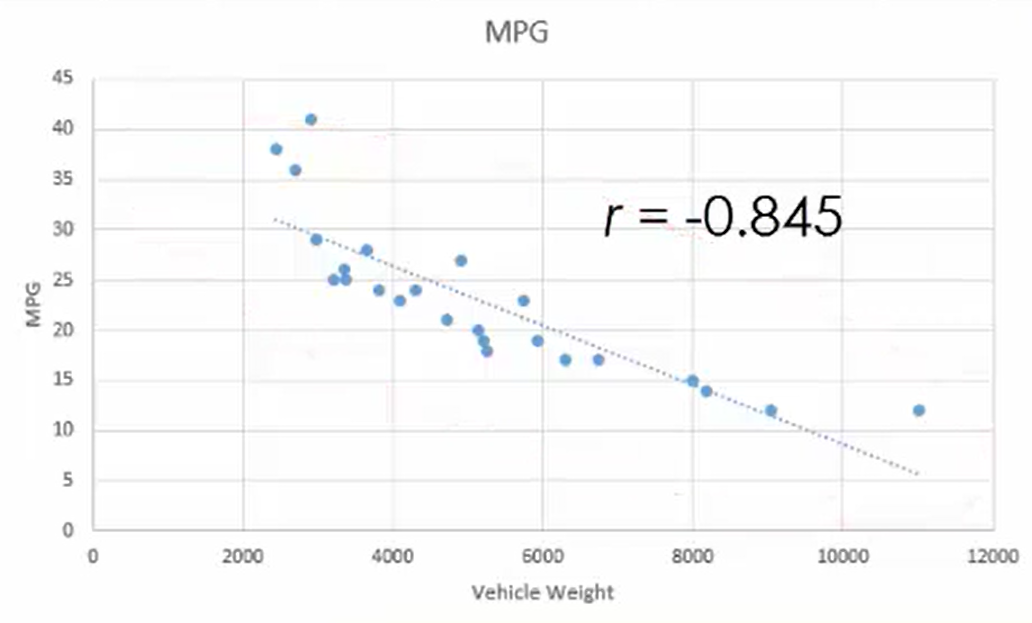 A heavier vehicle would probably get worse gas mileage, which would be a lower miles-per-gallon figure. As you see by the scatterplot, there’s a downward-sloping line. The correlation coefficient is -0.845. Since that value is close to negative 1, you can tell that it’s a negative association that is relatively strong.

Take a look at how much somebody weighs relative to how much ice cream he or she eats in a month. Say you ask a group of people how many ice cream cones they consume in a month and what their weight is. Maybe you would expect there to be a positive correlation here, meaning that if you eat a high-calorie foods like ice cream, you might be more prone to gain weight. 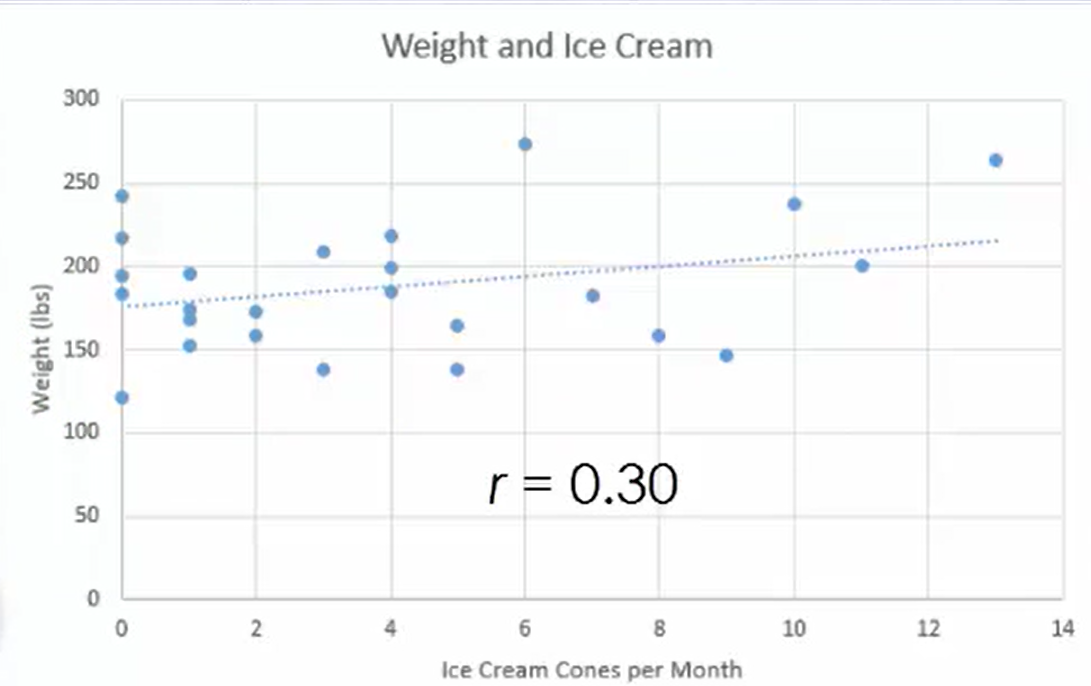 As you see from the scatterplot, there is a positive association, but it’s a very weak one. The correlation coefficient is 0.30, which tells us it’s relatively weak simply because it’s closer to 0 than it would be to 1.

A number that indicates whether there is an upward trend or a downward trend in the scatterplot, and also how well the trend follows a straight line.