Or
Close Popup
+
2 Tutorials that teach Utility Theory
Take your pick:
Previous Next

Determine a consumer's preference from using indifference curves and the law of diminishing returns.

(more)
See More
Tutorial
what's covered
This tutorial will cover utility theory, focusing on what a utility function measures, interpreting preference maps, and how to determine a consumer's preference using indifference curves and the law of diminishing returns.

Therefore, how do we make choices that maximize our utility?

hint
Remember that the term "utility" equates satisfaction; it's what we get out of something. Therefore, we clearly want to maximize it.

Now, the general form of a utility function is like any function. Utility is a function of variables x, y, and z, which simply means that our utility--or the satisfaction that we get out of something--is dependent on these various factors.

Utility is going to be different for everyone, because we are not all the same. We don't all enjoy the same thing, so therefore we won't get the same amount of satisfaction out of everything.

A formula used to represent consumer preferences; the utility function will result in an indifference curve mapping where each curve corresponds to a higher level of utility.

Let's begin our discussion of consumer choices by looking at a simplified model of a two-good economy.

In this two-good economy, you must choose between chicken and beef for dinner each night of the week. These are your only two choices.

How much of each will you consume each week? Is it the same for everyone? Obviously not.

Different consumers will have different preferences, and individual preferences affect how much chicken versus beef a person chooses.

We are going to look at utility on a preference map, which will include every possible combination of chicken and beef.

Each combination will give us some amount of satisfaction or utility, measured by a number.

Note, however, that the numbers are different for everybody and the scale itself does not matter. For instance, it doesn't matter if the numbers are 1 through 10, or 100 to 500.

The idea is that we are looking at each combination that provides some amount of utility, and it is increasing as we draw more and more indifference curves mapped out away from the origin, which we will illustrate shortly.

Individual preferences will affect, obviously, how much chicken versus beef an individual chooses. It will also affect a person's choice if their income or the price of chicken or beef changes.

big idea
Each consumer has their own utility functions which show their preference behavior; they are unique to an individual.

You may recall that when discussing consumers' preference behavior, we make three assumptions:

Here is an indifference curve that maps the two goods in our two-good economy--beef on the x-axis and chicken on the y-axis.

It shows all possible combinations of chicken and beef. All of the points (A, B, and C) represent combinations or bundles that the consumer is indifferent to--which is why we call it an indifference curve--because they yield the same utility; therefore, the consumer does not prefer one over the other. 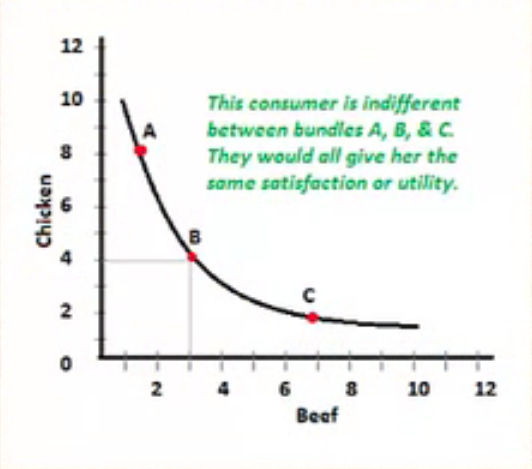 Now, if this consumer can get more and more of the two goods, then each of these indifference curves represent combinations that yield more of both, if that becomes possible.

As we have indifference curves moving away from the origin, the utility is increasing. 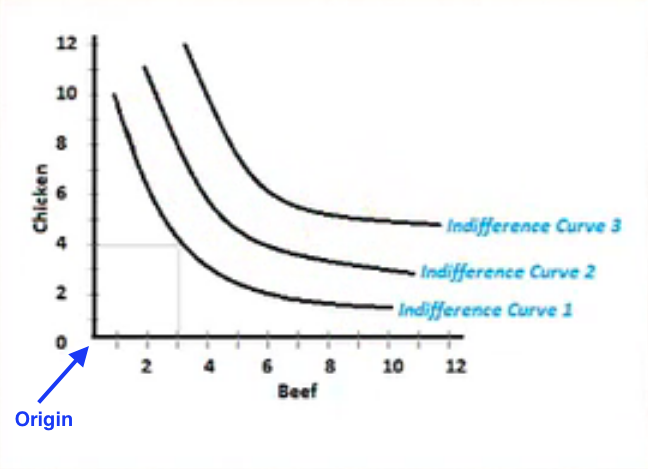 This consumer would have higher utility on Indifference Curve 2 than Curve 1, for instance, because he or she gets more chicken and beef. The highest utility would be on Curve 3.

big idea
There is an indifference curve for every level of utility.

Graphical depiction of the utility function; utility increases as the mapped indifference curves move away from the origin

4. Shape of Indifference Curves and the Law of Diminishing Marginal Return

So, why do indifference curves have this particular shape?

This is an important concept, so let's explore this further. Look at the indifference curve below, with its four points--A, B, C, and D.

Each of these point represents a different combination, or bundle, of chicken and beef. 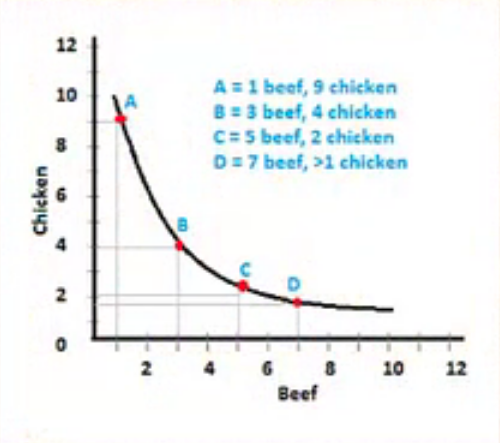 Notice that each time this consumer moves from one point to the next, she is gaining two more beef.

So, starting at A where she has almost no beef and all chicken:

Why is she giving up less and less chicken each time to get the same amount of beef?

hint
The key word in this definition is "additional unit" because marginal is defined as "additional."

Looking back at our example, at point A, the consumer has almost no beef at all. Therefore, going from point A to B, she is willing to give up quite a bit of chicken to have a variety.

At point B, now she has some beef. She is willing to give up some chicken, but not as much as before.

big idea
The more we have of something, we gain less additional utility from consuming more of it. At some point, our additional, or marginal, utility diminishes.

Note, however, that this does not mean we still do not enjoy it. It simply means we are willing to give up less in order to get more of it because the additional satisfaction gained from it is tapering.

For example, when you are eating a Thanksgiving meal, you likely enjoy most of that meal, but don't you tend to enjoy the first few bites the most? After you've had that first helping, you may go back for a second helping, so you are still enjoying it and your total utility is still increasing, but your additional, or marginal utility, is starting to taper or diminish.

This brings us to the marginal rate of substitution, which is actually just the slope of the indifference curve, which shows how much we are willing to give up of one good to gain more of the other. 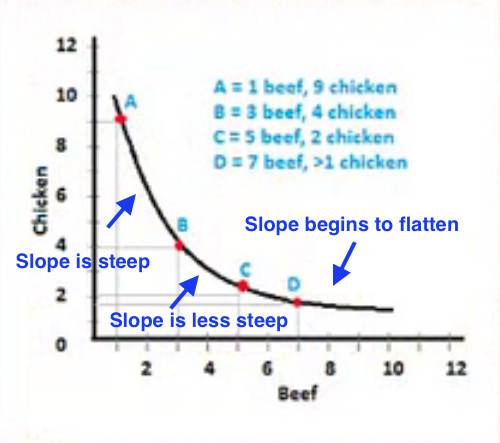 Notice that where the slope is quite steep, we are willing to give up a significant amount to gain a small amount on the x-axis. Then the slope becomes less steep and begins to flatten as we move along the curve.

This is why indifference curves are shaped this way and are convex to the origin, due to the law of diminishing marginal return.

Graphical depiction of the utility function; utility increases as the mapped indifference curves move away from the origin.

A formula used to represent consumer preferences; the utility function will result in an indifference curve mapping where each curve corresponds to a higher level of utility.