In this learning packet you will learn several common prefixes along with examples and definitions of words.

Prefixes come at the beginning of the word and carry meaning. By studying the prefixes in this learning packet, you will be able to expand your vocabulary tremendously and will be able to guess at the meaning of more complex words. This packet is especially useful for students studying for the ACT, SAT, or GRE Verbal section.

Prefixes start the beginning of a word.  They are often, but not always, short (two syllables or less).  They carry meaning and so can change the meaning of an existing word such as adding the prefix a- (meaning not or without) to the word social to create asocial or not social. Prefixes may also be added to roots which cannot stand by themselves.  For example, the word circumvent means to go around or to surround.  The prefix circum- means around.  So even if you did not know the meaning of circumvent, you could perhaps guess at its meaning by knowing that circum- means around.  In the next sections we will go through several common prefixes and examples. 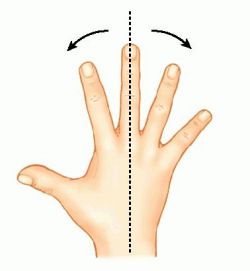 1. Abduction (the action of moving muscles away from the median axis of the body; second definition: kidnapping, taking someone away)

2. Abstain (to hold oneself back from something)

3. Abnormal (deviating from the standard) 1.  Communal (shared by everyone)

2.  Commission (a group of people who are in charge of something)

3.  Commingle (to mix together)

4.  Combine (to join together to make a whole) 3. Irredeemable (cannot be sold or bought back)

5. Imperishable (does not decay)

1. Literature (printed material, a whole collection of writings in one language)

2. Literal (following the exact words from the original, true to fact)

1. Protoplast (the primordial cell, a person or thing that is formed first)

3. Proto-industrial (the time before industrialization)

1. Epitaph (an inscription on a tomb or monument of a person who is buried there)

2. Epidermis (the outer layer of the skin)

3. Epithesis (the addition of a letter at the end of the word without changing its sense as in whilst instead of while)

1. Esophagus (the muscular passage between the mouth and stomach)

2. Esoteric (not openly admitted, restricted to a select few)

3. Esophoria (a squint with the eyes turned in toward the nose)

2. Euphuize (to be over over nice in language and expression, excessive refinement)

3. Euphemism (the substitution of mild for something offensive or blunt)

2. Contravene (to act against)

1. Telephone (an archaic and inconvenient form of communication with far away people)

3. Teleport (to transport by telekinesis)

**For even more prefixes: http://www.virtualsalt.com/roots.htm