Or
Close Popup
+
2 Tutorials that teach Water and Nitrogen Cycles
Take your pick:
Previous Next

Tutorial
what's covered
This tutorial will cover the topic of water and nitrogen cycles. We will explore how water cycles between the ocean, atmosphere, and land, as well as the movement of nitrogen through living things and the atmosphere. We will also discuss the human impact on the nitrogen cycle.

The water cycle, illustrated in the diagram below, is comprised of the cycling of water between three areas: ocean, atmosphere, and land. 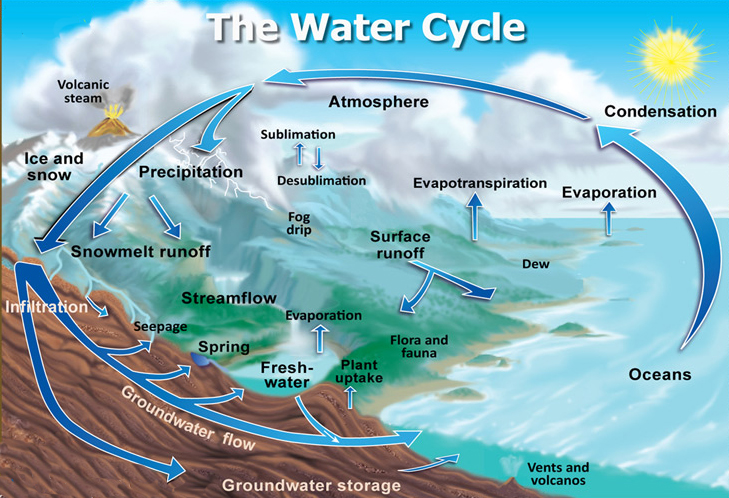 The sun causes evaporation from things like rivers, lakes, oceans, swamps, mud puddles, and ditches, adding water to the atmosphere. Water can also enter the atmosphere through transpiration, which is the release of water vapor from plants.

did you know
The evaporation process naturally cleanses water.

Once water is in the atmosphere, it condenses and creates clouds in what is called condensation. Once the condensation has reached a certain point, water will fall as precipitation. This water will join lakes and streams, which eventually return to the ocean, completing the cycle. Some precipitation will fall as snow and become compacted into a glacier, which takes the water out of the cycle until the glacier eventually melts.

Atmospheric nitrogen is not usable by life forms, so it needs to be fixed in the form that is usable. Nitrogen fixation is a process where atmospheric nitrogen, which makes up 78% of our atmosphere's composition, is converted into usable forms by microorganisms like bacteria. This type of bacteria lives on the roots of plants, such as legumes like clover, alfalfa, soybeans, and peanuts.

Animals get this nitrogen by consuming plants, and then building DNA, proteins, and muscle. In turn, they pass it on in the cycle through their urine, or when they die.

Microorganisms then break down the nitrogen in the body into usable forms again.

It is important to note that humans contribute to extra nitrogen in the cycle through the runoff from fertilizer use and animal waste. This extra nitrogen can cause harm to humans, animals, and various aquatic species. The excess nitrogen is primarily a problem in water systems where it can cause large algae blooms, which disrupt these aquatic ecosystems.

Most of the nitrogen used for fertilizer is created by an industrial chemical process, which uses natural gas and air to create usable nitrogen compounds. Agricultural nitrogen can be considered a pollutant.