Differentiate between the various types of conflict.

(more)
See More
Tutorial
what's covered
In this lesson, we’ll introduce the definition of conflict in general terms. This will include:

Welcome to the world of conflict resolution. Conflict is an unavoidable part of life. We’ve all been in a conflict at some point or another and maybe you’ve been unsure how to handle the situation. While it can’t always be avoided, we can equip ourselves with the skills to successfully resolve conflict. So, let’s start off with a basic introduction to conflict.

All conflicts share the same basic components. In basic terms, conflict is a form of relationship in which the members find their interactions in some way impeding their goals, their needs, or their well-being. Conflict always involves parties of two or more individuals who are involved in the conflict and who have some sort of relationship with one another. The primary issue at the root of a conflict between parties is a need or an interest.

A form of relationship in which members find their interactions in some way impeding to their goal, needs, or well-being.

Individuals involved directly in a conflict.

An association between two or more people, involving some form of interaction.

An action, belief, or physical item that a party perceives as important or essential to his/her satisfaction or happiness.

3. HOW WE DESCRIBE CONFLICT

Frequently when describing conflict, people are really talking about how they reacted to the conflict.

For example, you have probably heard or maybe participated in a conversation that went something like this: “I was so annoyed. Can you believe he did that? I told him… and he said to me… and I was just getting really upset. Then he said, ‘Well if you're going to be like that…’ and then just walked out the door.” In this case, the person is describing a conflict by rehashing what he/she said, what he/she did, what the other person said, and how he/she felt. As human beings, this is a typical response; we see things through our own lens.

Thus when talking about conflict, we tend to talk about it personally in terms of our own reactions and what we saw happening.

This is why, as you’ll learn in this course, it can helpful to step back and take a look at the basic elements in all conflicts— not only in terms of ours but also in terms of what is really happening.

Conflicts can emerge in a variety of situations, where parties in a relationship feel their other needs aren't being met. Let’s look at some examples that illustrate different types of conflicts that could arise in everyday life based upon the relationships you have with the people around you.

Conflict at work: You are sharing the break room with a number of people. You always do the dishes and keep the area clean, yet there are others who never do the dishes and leave the space dirty. Sometimes there's even food rotting in the refrigerator. You need the break room kept clean, but others are not doing that. This puts you and your coworkers in conflict.

Global conflict: There are two different nations that have vastly different needs and interests. These interests could be political, economic, or social. As we have seen through current events, when conflicts between nations are severe enough, they can result in war.

Consider a time when you were involved in conflict. What was your relationship to the other party involved? What needs/interests were at stake in the conflict? How was the conflict resolved?

5. TYPES AND SOURCES OF CONFLICT

There are a variety of conflict types which are described based on what the conflict centers around. See the table below for the descriptions and examples of each type of conflict.

think about it
Can you think of conflicts you’ve had in the past for each conflict type?

As previously mentioned, conflict includes parties who have needs and interests. The conflict occurs because one party feels that its need or interest is incompatible with the other party’s. Needs can be either external or internal. It’s important to realize that in a conflict, internal and external needs are not mutually exclusive.

A need that is a physical, tangible object.

A need that is an emotion or other internal phenomenon.

Let’s look at the Venn Diagram below for some examples of conflicts involving internal needs and external needs. 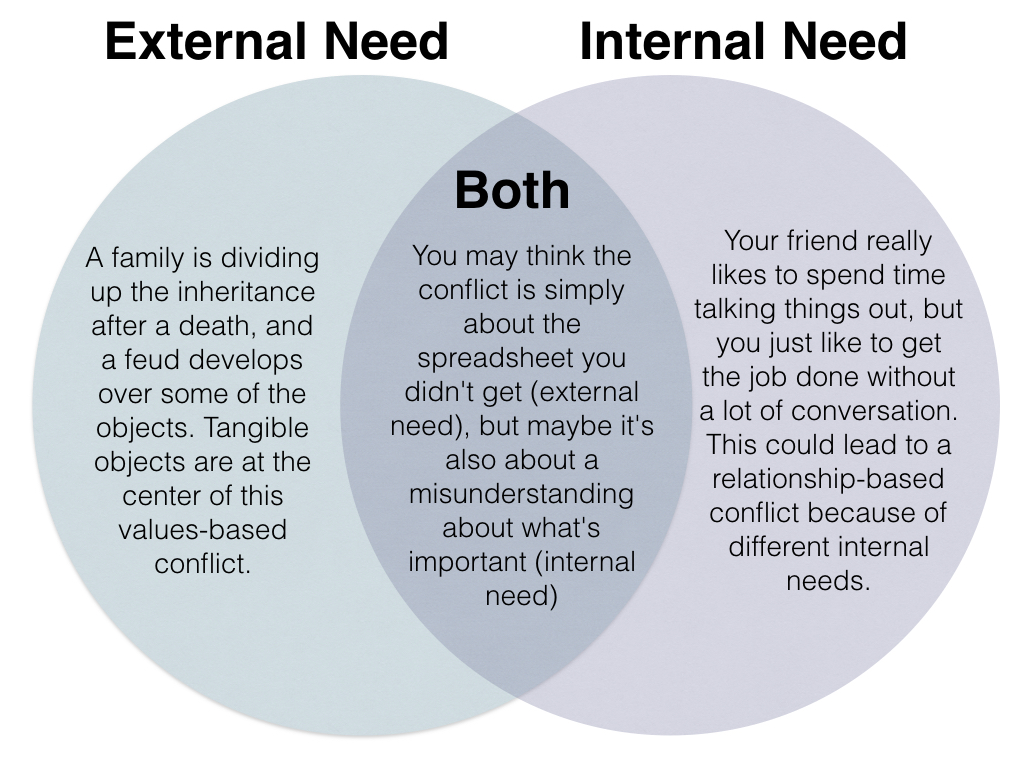 summary
In this lesson, we discussed how we describe conflict in personal terms and looked at some examples of conflict in action. You now understand the components of conflict: a relationship in which parties involved in are interacting in a particular way because they feel that their needs and interests are being challenged. You learned that there are five different kinds of conflict: data-based, relationship-based, interest-based, structural, and values-based. Knowing how to identify the type of conflict you're dealing with can help you in formulating the best possible solutions. You also discovered that conflicts can arise from two types of unmet needs: external (physical, tangible object) and internal (emotion, or other internal phenomenon). Conflict rarely comes from just one thing; when you get to the bottom of a conflict, you'll often find that it may have been caused by both types of needs being unmet.

A form of relationship in which the members find their interactions in some way impeding to their goal, needs, or well-being.

A need that is a physical, tangible object.

A need that is an emotion or other internal phenomenon.

An action, belief, or physical item that a party perceives as important or essential to his/her satisfaction or happiness.

The individuals involved directly in a conflict.

An association between two or more people, involving some form of interaction.