Working Class Life and Labor Unions in the Gilded Age

Differentiate between the major labor unions.

(more)
See More
Tutorial
what's covered
The remarkable growth of the American economy during the last half of the 19th century presented a paradox. On the one hand, the expansion of railroads, increased industrial manufacturing, and decreasing prices created opportunities for Americans to improve their standard of living. On the other, opportunities were few for the working class, who faced deplorable conditions at work, and in their homes and neighborhoods.

This tutorial examines the lives of American workers during the Gilded Age, and the ways in which they organized to improve working conditions, in three parts:

1. An Overview of Industrial America

Between the end of the Civil War and the turn of the century, the American workforce was transformed as the economy increasingly focused on industrial production. In 1865, nearly 60 percent of Americans lived and worked on farms. By the beginning of the 20th century, only 40 percent lived and worked in rural areas. A significant number of urban and suburban residents earned their wages in factories.

This transformation was the result of several trends, including the following:

Factories located in or near American cities employed a significant number of workers by the end of the 19th century. However, wages for most factory workers were very low. In 1900, the average factory wage was approximately $0.20 per hour, producing an annual wage of $600 or less. According to some estimates, 20 percent of the urban population lived at, or below, the poverty level, which fluctuated between $500 and $650 a year.

Although wages were low, work weeks were very long.An average factory work week was 60 hours: ten hours per day, six days a week. In some steel mills, workers were expected to put in 12-hour shifts, seven days a week.

Industrial workplaces were also dangerous during this era. Most factory owners had little concern for workers’ safety. In 1913, nearly 25,000 Americans lost their lives on the job. Another 700,000 workers suffered injuries that caused them to miss at least one month of work.

Much factory work was dehumanizing and repetitive. By the end of the 19th century, many factory managers embraced Frederick Taylor’s principles of scientific management, also called “stop-watch management”. Managers divided workers’ jobs into short, repetitive tasks to maximize profitability and efficiency. This approach de-emphasized the value of interaction between laborers and employers. It was difficult for those who had worked in collaborative or skills-based labor on farms, or in small shops, to adjust to this way of doing a job.

A management style that encouraged the division of manufacturing tasks into short, repetitive segments to maximize efficiency and profitability

Factory work during the late nineteenth century required many individual workers to complete specific, repetitive tasks. During the late twentieth and early twenty-first centuries, however, corporation executives and factory owners decreased their dependence on human laborers by introducing automation, or the replacement of human labor with robotic machinery, to complete similar tasks.

As a result of scientific management, some factory owners began to view workers as replaceable cogs in a well-oiled machine. However, industrial labor was diverse, and worked at a variety of jobs. Each job required particular skills, and was subject to different forms of oversight. 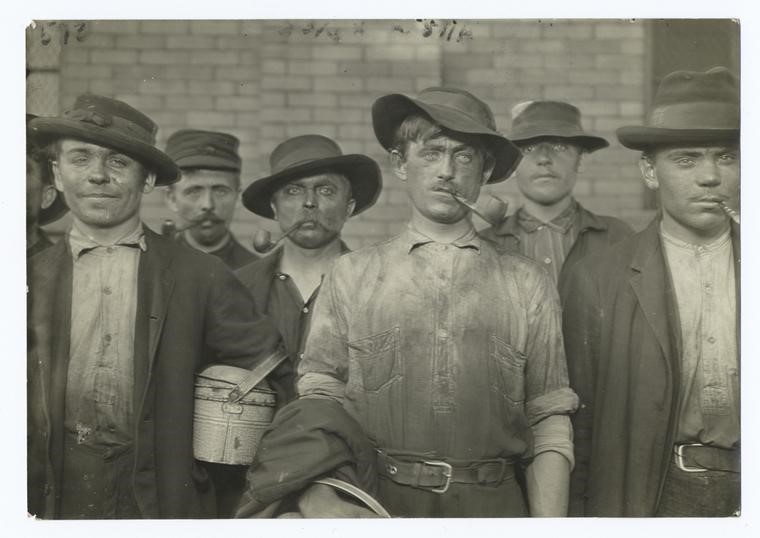 Skilled craftsmen and laborers, such as the iron and steel workers who worked in America’s steel mills, sometimes exercised a degree of control over their workplace. Completion of their tasks required teamwork involving other skilled laborers. This encouraged the organization of skilled laborers according to the industries and trades in which they worked.

did you know
The Amalgamated Association of Iron and Steel Workers, a labor union that represented skilled laborers in the iron and steel industry, was organized in 1876.

Most laborers in industrial America were not skilled, however.

Many who traveled from rural areas to cities to look for work, along with many immigrants to the United States, first gained employment as common laborers on the railroads, and in the shipping and steel industries. Common laborers had little job stability and were required to rely on physical strength for much of their work, which might include loading or unloading cargo from ships (pictured below). 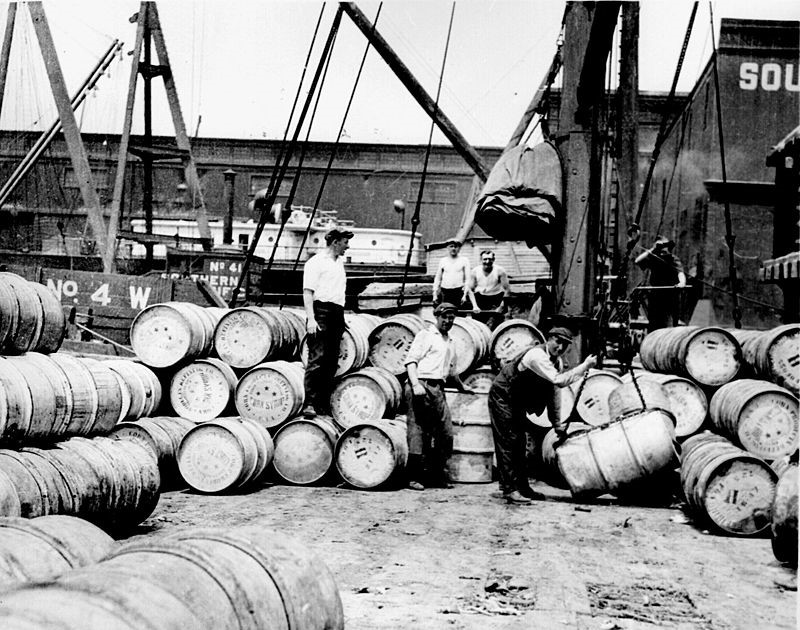 Some of the workers in textile mills and other factories were known as operatives: semiskilled laborers who performed repetitive tasks for long hours. Factory operatives seldom interacted with coworkers and were subject to the absolute authority of a foreman who watched their every move.

Factory owners hired women and children as operatives. Most female factory workers were under 25 years old, and were immigrants, or the daughters of immigrants. Many of them were driven to factory work by financial need. Most of these women worked in clothing or textile factories, where their presence would not offend men, who felt that heavy industry was their purview. Other women worked as bookkeepers, secretaries, and salesclerks.

did you know
From 1870 through 1900, the number of women working outside the home tripled. By the end of this period, five million American women were wage earners, with one-quarter of them working at factory jobs.

Women were paid less than men, because it was believed that they were — or should be — supported by a man. They did not, therefore, require a living wage. Factory owners used the same rationale to justify the low wages they paid to children. Children were small enough to fit between the machines and were hired to do simple work for a fraction of an adult man’s pay.

did you know
From 1870 through 1900, child labor in factories tripled. 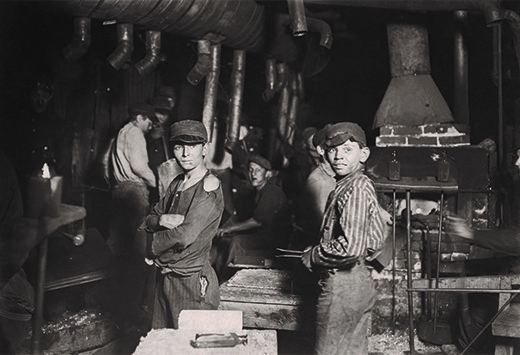 In the late 19th century, Industrial workers were subject to a range of work environments and experiences, determined by the nature of their work (e.g., skilled laborer versus factory operative) and social category (e.g., gender). These factors influenced the ways in which workers organized during the Gilded Age.

As economic and working conditions changed during the late 19th century, many industrial workers recognized the inequities they faced. During the mid-1880s, two national labor unions were formed to protect workers’ interests. Each used different organizational strategies and methods.

The Noble and Holy Order of the Knights of Labor, better known as the Knights of Labor. sought to unite diverse American workers and become the single, national labor union that would bargain with employers and curb the excesses of the industrial system.

A labor union that attempted to organize all American laborers, without regard to gender, race, or craft

The Knights of Labor began in Philadelphia in 1869 as a secret society that consisted of a handful of tailors. Led by Uriah Stephens, the Knights grew into an organization of national importance by 1878. It was in that year that the Knights held their first general assembly, adopting a reform platform that called for an eight-hour workday, equal pay for women, elimination of convict labor, and the creation of cooperative enterprises owned by workers.

did you know
Beginning in 1878, the Knights welcomed all male wage earners (regardless of color), with the exception of lawyers, bankers, saloon keepers, gamblers, and speculators. The Knights believed that these groups accumulated wealth through illegal means, or by taking advantage of the misfortune of others.

In 1881, the Knights welcomed women as members. Much of the group’s power came from its concept of “One Big Union”: the inclusion of all wage earners, including women, African Americans, Native Americans, and immigrants — of all trades and skill levels. Although they were generally opposed to the use of strikes, the Knights prevailed in several railroad strikes in 1884 and 1885, including one against the notorious “robber baron” Jay Gould, due to their large membership. As a result, their popularity among workers grew. The Knights reached the pinnacle of their influence in 1886 when membership exceeded 700,000.

The rise of the Knights of Labor marked a break from the tradition of organizing unions according to specific trades or skills. However, craft unions continued to operate and, in 1886, 20 of them met to organize a national federation of craft unions. This group became the American Federation of Labor (AFL).

Protective organization that represented the interests of craft unions

Led by Samuel Gompers, who immigrated to the United States during the Civil War and worked in the cigar trade, the AFL focused its efforts on the economic advancement of its members. Unlike the Knights’ concept of “One Big Union,” the AFL maintained a strict policy of not interfering in the business of its member unions. Gompers often settled disputes between federation members and used the AFL to represent all of them on matters that affected all workers, such as the eight-hour workday. For these reasons, the AFL remained an organization of craft unions that, for the most part, represented skilled male workers, not common laborers or factory operatives. By 1900, the AFL had 500,000 members.

Although the Knights of Labor and the American Federation of Labor took different paths to advance worker interests, they faced similar obstacles. Chief among them were the following:

Labor unions (like the Knights of Labor and the American Federation of Labor), which emphasized organization and cooperation to benefit workers, were an important alternative to American individualism: the belief that people could climb the economic ladder on their own. Since many industrial workers were employed by large corporations, large labor unions, representing those workers, were necessary to deal with employers equally. Whether they would do so successfully remained to be seen.

summary
After the Civil War, more and more people crowded into urban areas and joined the ranks of wage earners. The landscape of American labor changed. For the first time, most workers were employees — many in urban factories. They engaged in a variety of labor, most of which was performed in poor conditions. For many workers, there were few alternatives. Some of them realized that positive change required organization, and formed labor unions that sought to improve conditions for all workers through political advocacy and negotiation with owners. Groups like the Knights of Labor opened their membership to all wage earners. Skilled laborers first organized craft unions, and ultimately joined the American Federation of Labor. These groups had different organizational structures (and membership), but faced similar obstacles.

Protective organization that represented the interests of craft unions

Protective organization that attempted to organize many American laborers regardless of gender, race, or craft

A management style that encouraged the division of manufacturing tasks into short, repetitive segments in order to maximize efficiency and profitability

A person born in a disadvantaged situation who, nevertheless, rises through the ranks of society through hard work and ingenuity