Tutorial
what's covered
In this lesson, you will learn strategies to overcome mental biases and improve financial decision making and well-being. You will better understand how using agility and overcoming these biases can make you more productive. Specifically, this lesson will cover:

1a. Conflict Between the Present and the Future

Procrastination is placing more value on the present at the expense of the future. The conflict between choosing between today and the future is shown in the illustration below.

hint
Although sometimes you might think you can’t control how your time is spent, in most situations you actually do have choices. 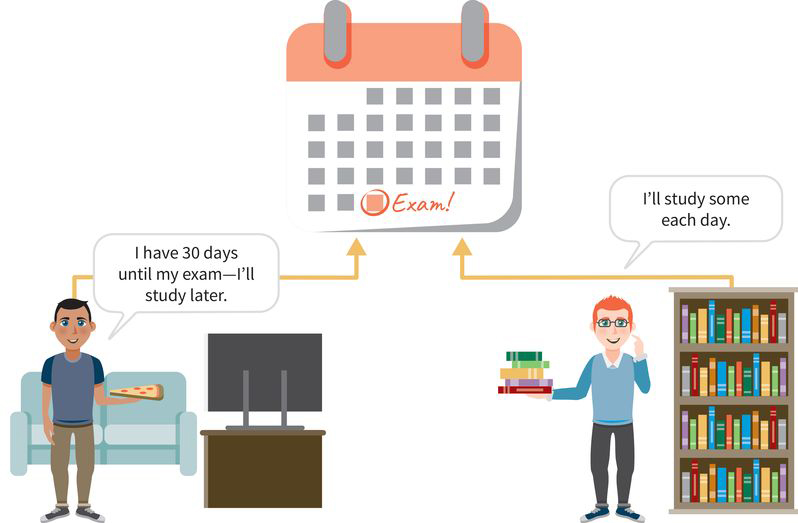 Procrastination can get so bad that when the time comes to act, some people often choose to put off doing something again and again. This happens because of hyperbolic discounting, in which as the time to act nears, the value of future benefits from taking action is perceived to decrease relative to other immediate alternatives. Consider the problem some people have maintaining their weight. As this example illustrates, people tend to undervalue the future, relative to the present, and to procrastinate until some exterior influence, such as a deadline or a doctor’s orders, forces them to act.

This same philosophy extends to financial decision making. Here’s an example from the personal finance world. Let’s say that someone offered you the following deal: “You can either have $5 today or $7 tomorrow.” What would you take? Remember, there is no correct answer with this type of question. Now assume the same person comes along and asks, “Would you prefer $5 in one year or $7 in one year and one day?” Again, what would you answer?

The inconsistency in waiting based on how close or far away the reward is (as measured by time) is an example of hyperbolic discounting. 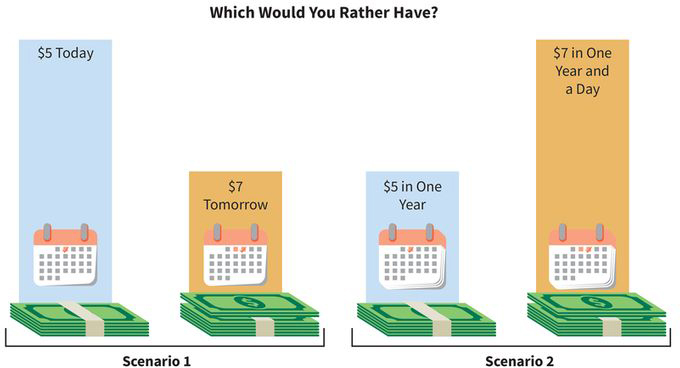 Who do you think is more productive? Someone who procrastinates, or someone who is proactive and can see the value of patience?

We all make many financial decisions each day. Behavioral economists study how people go about making these decisions. It turns out that our brains are wired to be efficient during the decision-making process. To simplify things, our minds use heuristics to make decisions more quickly and easily than if we were to labor over every choice. As shown in the following illustration, heuristics act like a funnel that takes a lot of information and condenses things down to a decision-making shortcut. 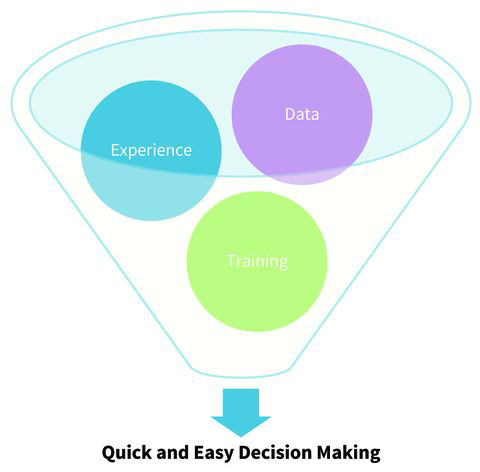 As these examples illustrate, heuristics can either help or hinder you as you move along your financial journey. Let’s take a look next at some common heuristics that can lead you astray when making financial decisions: status quo bias, loss aversion, and optimism bias.

The status quo bias is your personal preference for keeping things just like they currently are. This bias is prevalent because most people are usually comfortable with their current situation, even when much better options are available. Those who fall prey to this heuristic tend to:
Strong agility skills can help give you confidence to make sound decisions. You can better understand the value of changing your ways given changes in your circumstances.

did you know
Whenever you hear someone say, “If it isn’t broken, don’t fix it,” they are exhibiting a status quo bias.

It is often too easy to get stuck doing the same old thing, even if the past behavior has not been particularly beneficial. As shown in the following illustration, the status quo bias can lead to procrastination by overvaluing the present situation compared to the gains that could be received from a new opportunity. Over time, the status quo bias can lead to missed opportunities as a result of continued inaction. 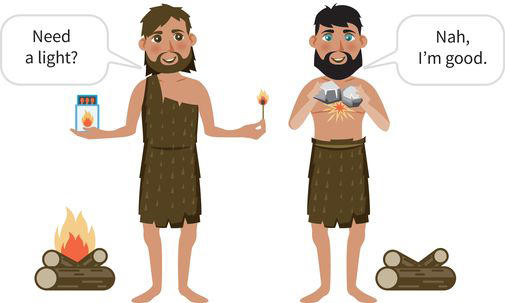 Most people dislike losing, especially money. In other words, people tend to be loss-averse. 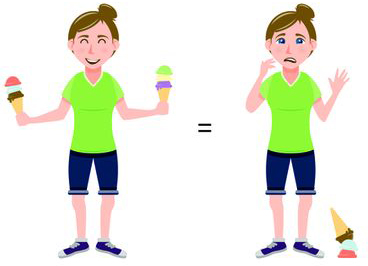 As a result, people generally focus much of their attention on avoiding losses because the joy of a gain is smothered by the pain of a loss. The fear of loss also helps explain the status quo bias.

How does this loss-aversion heuristic translate to financial decisions? Consider that some investments over the long run, say, 20 years, have a consistent track record of superior performance. However, these same investments, over the short run, might gain and lose value regularly. People who are loss-averse tend to focus on these short-term fluctuations rather than on the 20-year payoff. Over time, they will miss out on benefiting from long-term gains, even when they have the time and resources to deal with a short-term loss.

Although people are generally loss-averse, there are others who think that they will rarely, if ever, experience painful losses during their lifetime. These people suffer from an optimism bias. 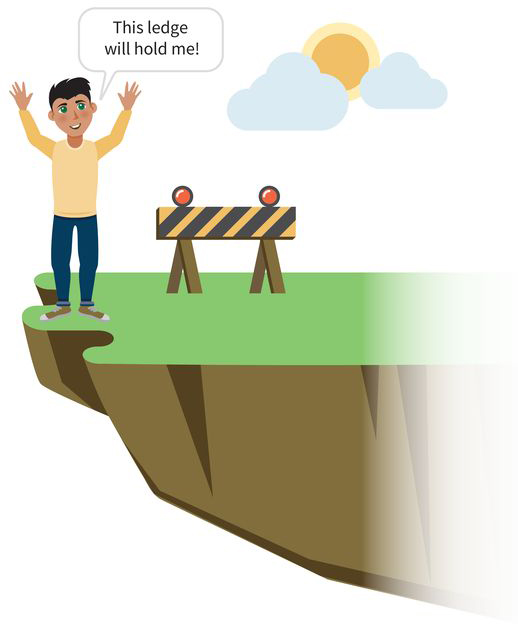 Say Jake buys stock in a company without doing any research. If the stock rises in value, Jake might attribute the success of the investment to his stock-picking skill rather than luck. When this happens, Jake may then go on to find reasons to confirm the assessment of his stock-selection “skill” and ignore any evidence that his investment success was based on pure chance. This is known as a confirmatory bias, which leads to overconfidence in future decisions. Thus, lucky novice investors like Jake can quickly become overly optimistic and overconfident, which can be a devastating combination for long-term investment success.

3. Using Heuristics as a Decision-Making Tool

When it comes to making any type of major decision – particularly a financial decision – financial planning experts recommend that you use a formal decision-making process, such as the one shown in the illustration below. 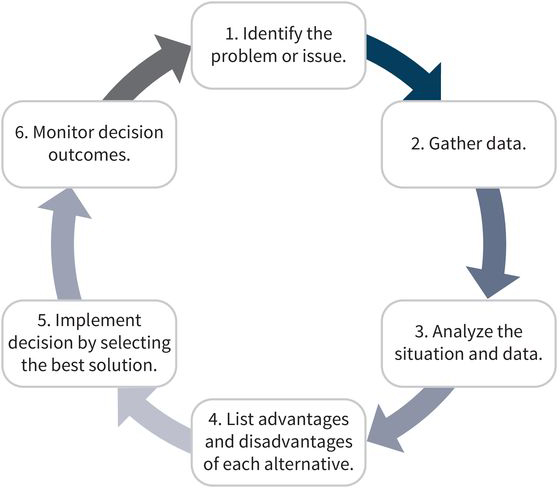 summary
In this lesson, you learned strategies to help you improve your decision-making in terms of your finances. Procrastination is putting more value on the present than the future. This can hurt your productivity and long-term financial interests. Hyperbolic discounting is the act of continually pushing back deadlines because the perceived long-term benefit diminishes as the deadline draws closer.

Heuristics are how we apply our experiences to new situations. For example, some of us carry a status quo bias where we might overestimate how “good” things are right now. Strong agility skills can help overcome this. Others have loss aversion: avoiding risks while sacrificing favorable outcomes that can come from taking a calculated chance. Some people exercise an optimism bias. Generally, this is a positive heuristic, but it can lead to overconfidence and poor performance in extreme cases. Another heuristic leading to overconfidence is confirmation bias, which is pairing a success with misguided rationale for why that success took place.

We can all use heuristics as a decision-making tool, especially if we follow an established decision-making process that’s proven to work. You saw a six-step process in this lesson.